Global Citizens on the Rise

Last year I (Nancy) was asked to contribute to the inaugural project of the Global Citizen Foundation (GCF), a new Geneva-based organization that aims to support “research and educational programs that reveal the preferences, capabilities, and choices of the world’s citizens.”  Other researchers on the project include Franklin Allen, a professor at the Wharton School at the University of Pennsylvania; three CGD Advisory Group members, Jere Behrman, Dani Rodrik, and Andrew Steer; and Arvind Subramanian, a CGD senior fellow. Together we have compiled a set of six thematic studies on finance, demographic challenges, economic growth, resource scarcity, trade integration, and global governance.

My topic is global governance. Together with Alexis Sowa and Christian Meyer here at CGD, I have been thinking and writing about how global cooperation and institutions can enhance the welfare of the worlds’ citizens. The resulting paper, Global Markets, Global Citizens, and Global Governance, was released by the GCF and today as a CGD working paper.

Focusing on global economic and financial governance, my co-authors and I argue in the paper that globally aware citizens can (and should) be key players in supporting and strengthening the current weak and inadequate system of global governance, as a means to build a fairer and more far-sighted global order.

Globalization and the global market system have helped millions of people escape poverty and brought many other benefits, including the rise of a new global middle class. But the gap between the richest and poorest countries and people not only persists, it is getting larger (for a lively account of inequality, see Branko Milanovic’s The Haves and Have-Nots).  The figure below, taken from our paper for the GCF, illustrates the likely growing gap between the richest and poorest 10 percent of the world’s population over the next 25 years, under the assumption of country-specific future growth rates that in each country are equally shared across all parts of the current distribution. The graph illustrates the dis-equalizing arithmetic of equally shared growth (to be assessed more systematically in a forthcoming paper with Christian Meyer).  Equally shared future rates of growth will increase the absolute income gap between the well-off and the poor, especially in high-inequality countries like many in Latin America. For the next two or three decades in countries like India, and even in richer Brazil, median-income households will continue to be vulnerable to falling into poverty in the event of health or other idiosyncratic risks, or an economy-wide recession, or increasingly frequent and severe extreme weather events due to climate change. 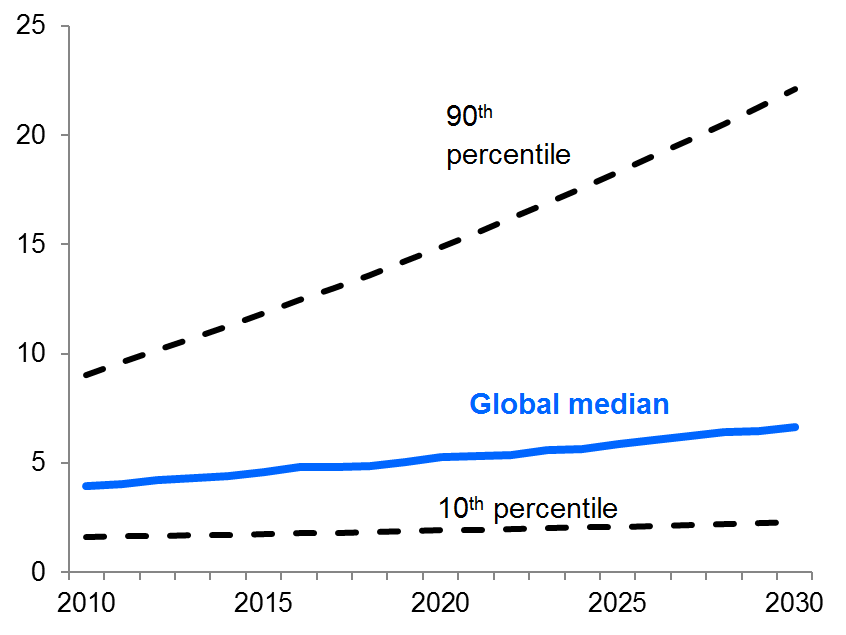 At the individual or household level, it is almost impossible for the world’s median-income citizen (at less than $4 a day) to manage and mitigate the risks she faces, whether these arise domestically or from abroad. Nor is that citizen in democratic countries like India (at less than $2 per day) and Brazil (at about $6), necessarily well represented in the political arena. For at least the next several decades, the typical citizen in the world will continue to be mostly a victim or beneficiary of decisions made by others – at home and abroad.

In an increasingly interconnected global economy, this problem represents a fundamental moral challenge for those citizens, especially those far better off in material terms who have political voice at home and can exert that voice on global issues.  Those “global citizens” have a responsibility to promote a better globalization that will bend the benefits of growth toward the bottom half of the world’s population. A better globalization requires more globally friendly trade, migration, aid, tax, anticorruption and other policies in the largest and richest countries, and more active collaboration and coordination at the global level to help countries bind themselves to those policies. Dealing with climate change requires a particularly robust system of global collective action.

But for the most part our current global polity sputters along, sometimes providing and managing the relevant rules and mechanisms (a good example is the noteworthy but largely incomplete G-8 agreement to deal with tax abuses), but rarely doing so fully and effectively.

There is room for optimism, however. At the core of our paper lies the encouraging finding that citizens everywhere are becoming more aware and more active in seeking changes in global norms and rules. Data from global opinion polls reveal that across the world, more people, especially the more educated, see themselves as “global citizens,” aware that what happens inside their own country matters for others outside and that what happens outside matters for them and for their children and grandchildren. Citizen activism in support of a better world has risen dramatically in the last decade. There is nothing new about activism per se, but the internet is giving citizens greater opportunities to make demands on powerful authorities beyond their borders.

This change can create an opportunity to amplify the voices of global citizens, strengthen the ties among them, and link their good intentions to effective national and international policies, giving global society better channels through which to influence the global polity (for example, by generating information and monitoring the performance of governments and international organizations). Although the politics, rules, and institutions of cooperation among countries have not kept up with the increasing awareness of and demands from global citizens for a better and fairer world (exemplified by the repeated failures of the UN climate summits), we argue that concerted global activism could help close this gap.

What then, should we do? For the highly empowered global citizens in rich countries, a priority should be to lobby for domestic policies that do not impose negative spillovers on others. Putting one’s own house in order could mean introducing a carbon tax in the United States, reforming immigration in the United Kingdom, or opening up agricultural markets in the European Union. This conclusion is in line with CGD’s modus operandi of thinking about how rich-country policies and practices affect poor people in developing countries. (Each year, CGD’s Commitment to Development Index tries to quantify what rich countries do to help or hinder development abroad.)

Activism at home in rich countries can be only the start: the first-best solution to many global problems would be a more “activist” global polity, one in which a more legitimate, more democratic, and more effective set of intergovernmental institutions helps countries pre-commit to and sustain rules and practices that are in the broad common interest and protect the interests of the world’s poorer countries.

Of course, all this is much easier said than done. Our paper represents a modest attempt to disentangle some of the complex challenges of global economic governance, including the challenges of legitimacy and effectiveness of global institutions. How can organizations like the World Bank, the International Monetary Fund, and the World Trade Organization advance the interests of people in the bottom half of the global income distribution? What are the limits to citizen-based activism in the global arena? What are great examples? Check out the paper and let us know what you think!