The next US administration should allocate at least $1 billion in additional resources—equal to a little over two percent of current US overseas assistance—exclusively dedicated to advancing gender equality in developing countries, with a specific focus on improving women’s and girls’ economic opportunities and outcomes.

Women and girls continue to lag in terms of economic participation and empowerment globally. This is an issue of both rights and economics. Through discriminatory norms and institutions, women and girls are prevented from realizing their full potential, where they and their children as well as economies and societies bear the costs.

The world needs to ramp up action on global, regional, and national levels. Innovation—and bringing innovation to scale—are badly needed. The US has a unique opportunity to lead in improving economic opportunities for women and girls by establishing a global vision and a corresponding fund with significant financial resources to spur change, implemented through bilateral, multilateral, and innovative financial channels, and involving both government and private sector actors. 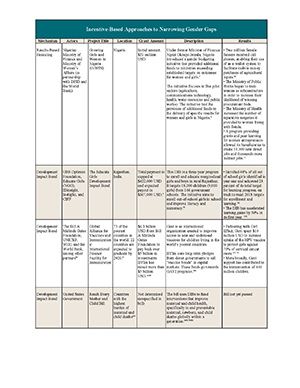 The vision and the objectives of the fund should be global. Funding allocations should go mostly to developing countries, but the vision, the analysis, and the lessons would be applicable across the world and the fund should have global membership. By commanding significant financial resources, the fund would break with the precedent of past initiatives, including those of the United States, which have been slow to bring about change in women’s and girls’ economic empowerment. The fund would be predicated on the need to jumpstart change by making significant initial investments, as well as the fact that prioritizing the use of incentives-based approaches can work to leverage available development and private sector resources by demonstrating significant returns to investments in women and girls. (Previous examples of incentive-based approaches to advance outcomes for women and girls are provided in the table at right.)

The fund should use robust metrics to define benchmarks of success and rely heavily on data and the evidence base to invest in approaches proven to work.

The fund should spearhead initiatives in the following main streams that directly address gender-based constraints to women’s economic empowerment and respond to best practices as follows:

(See the chart below for a visualization of funding allocations.).

As proposed, the White House would provide overall direction to the fund, which would be operated out of the US Agency for International Development. The White House would also provide US leadership in a new international secretariat modeled on the Open Government Partnership, which would coordinate and monitor pledges towards policy change across member countries to improve outcomes for women and girls. The secretariat should house its own data initiative, which will develop global metrics for monitoring, fund rigorous evaluations where applicable, and compile lessons learned. The proposed budget for this function is $50 million, of which 80 percent should be devoted to generating data and building the evidence base. 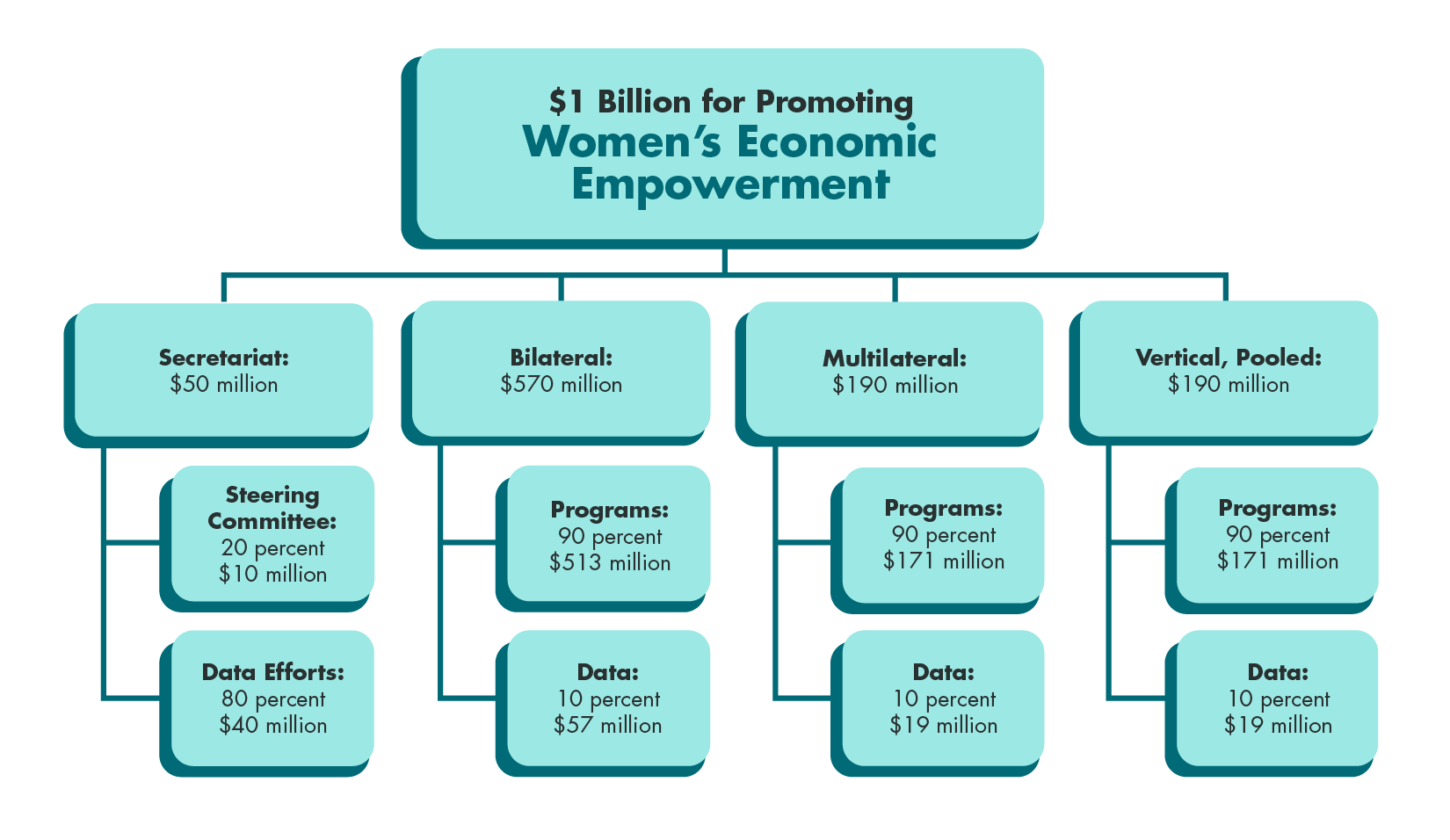 The remaining $950 million should be distributed through three avenues: bilateral aid channels, multilateral organizations, and a new vertical, pooled fund. $570 million (60 percent of the remaining funds) should be distributed directly to countries and in-country institutions through bilateral channels, with 10 percent of the $570 million ($57 million) earmarked for necessary data and transparency efforts, including data collection through evaluations and routine monitoring systems. Rigorous metrics should guide the disbursement of all funds.

Multilateral institutions should receive $190 million for programming focused on women’s economic empowerment, of which 10 percent ($19 million) should be dedicated to data and transparency. The newly-created vertical fund should function as a pooled mechanism, leveraging a $190 million commitment from the United States to generate contributions from other public and private sector institutions. (Using the models of Gavi, to which the United States has contributed 10 percent of its total funds, and the Global Fund, to which the US has contributed 31 percent of the total, we suggest a 20 percent contribution from the United States for this new pooled mechanism focused on women’s economic empowerment, projecting the ability to generate $950 million total.) Consistent with the allocations described above, 10 percent of the United States’ contributed $190 million ($19 million) should be allocated to data and transparency efforts.

Note: This memo builds upon a proposal initially put forth in CGD briefs Promoting Women’s Economic Empowerment through US Foreign and Development Policy and Three Big Ideas + Three Smart Reforms for US Development Policy.

Thanks to Tanvi Jaluka for assistance with background research.

We report a small-sample, preliminary evaluation of the economic impact of temporary overseas work by Haitian agricultural workers. We find that the effects of matching new seasonal agricultural jobs in the US with Haitian workers differs markedly from the effects of more traditional forms of assistance to Haiti, in three ways: The economic benefits are shared roughly equally between Haiti and the United States; these benefits are very large, including raising the value of Haitian workers’ labor by a multiple of fifteen; and the portion of the benefits accruing to Haiti is uncommonly well-targeted for the direct benefit of poor Haitian households.

Publication
The Dangers of Deal Making for Development
Scott Morris

Private sector development has long been viewed as essential for economic growth in developing countries, and the US role in promoting it has focused mostly on how developing country governments could best set a policy environment that made it possible. But let’s consider the risks of concentrating too heavily on the private sector. What could go wrong with an agenda that is centered on “deal making for development”?