The Department of State serves as the lead US foreign affairs agency. A considerable share of State’s operational budget is dedicated to supporting its network of embassies and consulates across the globe, which work to advance US interests and protect US citizens abroad. However, State also plays a critical role in US government efforts to promote development and address humanitarian crises around the world. As part of the Department’s remit to contribute to peace, stability, and progress, it manages US contributions to select international organizations, oversees the US commitment to fight global HIV/AIDS, and facilitates aid to refugees and other vulnerable populations. State also administers assistance designed to further other foreign policy goals, including democracy promotion, combating human trafficking, post-conflict stabilization and reconstruction, international narcotics control and law enforcement, and military assistance. State Department guidance underscores the importance of its work in furthering development: “The surest path to creating more prosperous societies requires indigenous political will; responsive, effective, accountable, and transparent governance; and broad-based, inclusive economic growth. Without this enabling environment, sustained development progress often remains out of reach.”[1] 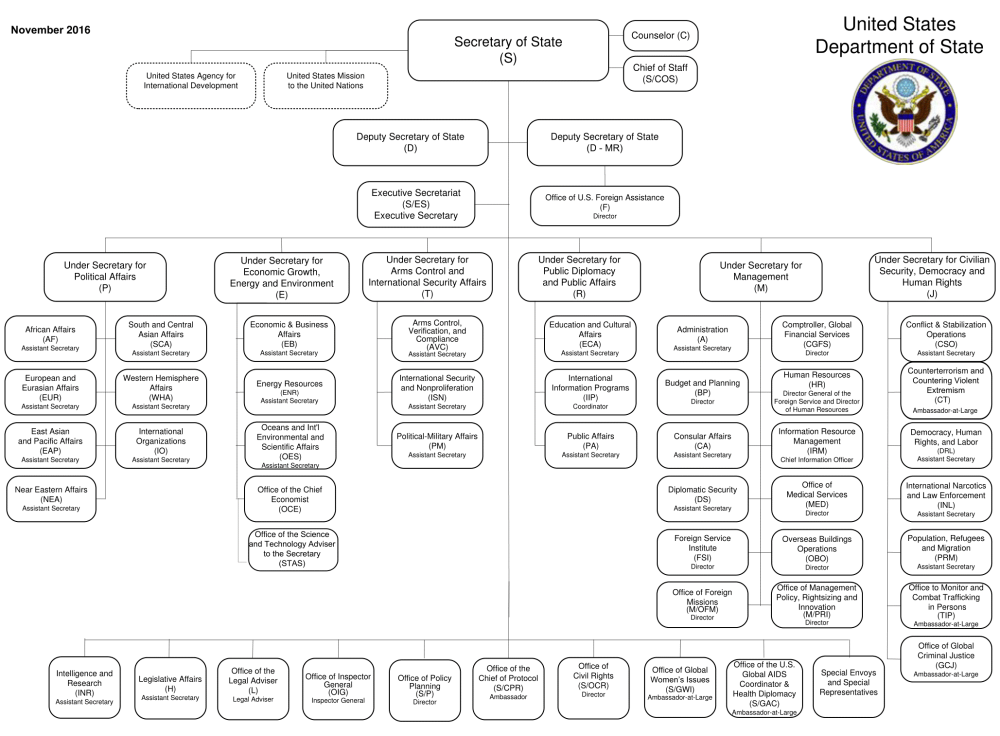 The secretary of state is advised by six under secretaries, each of whom oversees a number of bureaus and offices. State has both geographic bureaus, which focus on foreign policy in a specific region (e.g., the Bureau of African Affairs), and functional bureaus, which focus on specific issues informing policies that affect all countries and regions (e.g., the Bureau of Democracy, Human Rights and Labor). Offices and bureaus across the State Department contribute to furthering development and providing humanitarian relief. The work of a select set of bureaus and offices directly involved with such missions is detailed in sections below.

State also provides policy and budgetary guidance to the US Agency for International Development (USAID), though the relationship between the two is complex and has evolved over time. In 2006, the George W. Bush administration created the State Department role of director of foreign assistance, which was held concurrently by the administrator of USAID. This dual-hatted arrangement gave the USAID administrator greater influence and authority over budget and planning processes, but some observers warned it was a “de facto merger” that could cloud US foreign aid objectives.[3] Ultimately the change was short-lived. The Barack Obama administration maintained the Office of US Foreign Assistance (F Bureau) at the State Department, but determined that USAID’s administrator would no longer serve as its director. Today, State retains significant budgetary authority over USAID. USAID and State submit a joint congressional budget justification to accompany the president’s annual budget request, and periodically detail future direction and priorities in a joint strategic plan.[4]

State is responsible for executing select US assistance programs. For others, it provides overarching policy guidance, but passes funding through other agencies, often USAID, to partially or wholly implement programs. For instance, according to the US Overseas Loans and Grants database,[6] State served as the implementing agency for $4.4 billion of the roughly $12 billion allocated to it for economic assistance in FY2014, while USAID implemented $5.4 billion, and Health and Human Services (HHS) implemented $1.7 billion to carry out international programs.[7] USAID and HHS are major implementing partners of global health programs under the President’s Emergency Plan for AIDS Relief (PEPFAR).[8] Additionally, State oversees certain security assistance accounts, including Foreign Military Financing and International Military Education and Training, which are implemented by the Department of Defense. This arrangement works to ensure US assistance programs leverage the appropriate technical expertise while remaining aligned with broader US foreign policy objectives.[9]

In recent years, the State Department’s core funding has been subsidized with off-budget, emergency appropriations to support “overseas contingency operations” (OCO). Beginning in FY2012, OCO funding provided a means of supporting US operations in Afghanistan and Iraq using the regular appropriations cycle. This reduced the need for supplemental appropriations bills—which had become commonplace following the attacks of September 11, 2001. In more recent years, OCO has evolved to encompass a wider range of programming, including counterterrorism and peacekeeping programs in other regions.[10]

Fighting Global HIV/AIDS:  The Office of the Global AIDS Coordinator (OGAC)—which directs the President’s Emergency Plan for AIDS Relief (PEPFAR)—is housed at the State Department.[14] Enacted by President Bush in 2003 with the signing of the first U.S. Leadership Against AIDS, Tuberculosis and Malaria Act (P.L. 108-25),[15] PEPFAR supports HIV/AIDS prevention, care, and treatment programs concentrating on 15 focus countries. To date, PEPFAR is the largest commitment by any nation to combat a single disease, and it employs a unique model of aid delivery that concentrates resources in a few countries to rapidly scale-up proven interventions. PEPFAR has an impressive track record. An estimated 1.5 million babies who otherwise would have been infected were born HIV-free as a result of PEPFAR’s efforts to end mother-to-child transmission of the disease.[16] State transfers most of the resources for PEPFAR programs to implementing partners, including USAID and HHS, and administers US contributions to the multilateral Global Fund to Fight AIDS, Tuberculosis and Malaria. The Global Fund invests donations from donor countries, as well as contributions from recipient countries, the private sector, and foundations, to support health programs in more than 100 countries worldwide.

Finding Durable Solutions for Refugees: State’s Bureau of Population, Refugees, and Migration (PRM) engages to protect and assist refugees, other migrants, and conflict victims around the world. PRM manages contributions to international organizations, such as the United Nations High Commissioner for Refugees and the United Nations International Children’s Emergency Fund (UNICEF), as well as nongovernmental organizations that support vulnerable and persecuted populations. US support helps these organizations provide shelter, water, food, security, and education to those in need. This assistance seeks to advance durable solutions to displacement in many of the world’s most challenging places: repatriating refugees when they are no longer at risk in their home countries, assisting in their integration within the country to which they fled, or supporting their resettlement in a third country. The Bureau also monitors the effectiveness of international programs that receive US taxpayer dollars and ensures they align with US policy.[20]

Promoting Democracy and Human Rights: The Bureau of Democracy, Human Rights, and Labor (DRL) leads US efforts to promote democracy, human rights, and labor rights abroad. DRL’s Human Rights and Democracy Fund provides flexible funding that can be deployed to address human rights crises and deteriorating political situations around the world. DRL is also responsible for publishing annual reports on human rights practices and religious freedom globally.[26] In FY2015, the budget of DRL was $78.5 million.[27]

Combating Human Trafficking: The State Department’s work on combating sex trafficking and labor trafficking is led by the Office to Monitor and Combat Trafficking in Persons (TIP). The office is organized around the “3P” paradigm of prosecuting traffickers, protecting victims, and preventing trafficking. It is responsible for producing the State Department’s annual TIP report, which assesses the commitment of country governments around the world to addressing human trafficking.[28] TIP awarded over $18 million in grants and cooperative agreements to 27 projects that fight human trafficking in FY2015[29]

Leveraging Development and Diplomacy to Counter Violent Extremism: The State Department, primarily working through the Bureau of Counterterrorism and Countering Violent Extremism (CT), partners with other US agencies and international partners to counter violent extremism around the world. State’s key programming is focused on building an understanding of the drivers of violent extremism and promoting alternatives to this pathway, as well as supporting civil society in tackling extremism and working through the criminal justice sector to address radicalization. [30] Congress appropriated $127.5 million to the bureau in FY2015.[31]

Expanding Opportunities for Women and Girls: The State Department’s Office of Global Women’s Issues (GWI) works to integrate issues of women’s and girls’ equality and empowerment into the creation and conduct of US foreign policy, often working in coordination with other State Department bureaus, the White House, USAID, other US agencies, and external partners. In recent years, the office has focused on four strategic priorities: promoting women’s inclusion and leadership within the peace and security agenda, advancing women’s economic empowerment, combatting gender-based violence, and investing in adolescent girls. Initiatives include the Women’s Entrepreneurship Fund, a partnership with Kiva to increase one million businesswomen’s access to capital in 83 countries. The office’s work to achieve global gender equality is central to the promotion of American values and economic and security interests worldwide. Funding for current programming is estimated at approximately $100 million.[32]

Combating Climate Change: In 2009, the secretary of state appointed the first special envoy for climate change (SECC), who serves as the United States’ chief climate negotiator, working with partners and allies around the world to secure commitments to tackle climate change.[33] The SECC represents US interests at relevant international summits, such as the annual Conference of the Parties to the United Nations Framework Convention on Climate Change. In FY2016 and FY2017, the State Department transferred $500 million from the Economic Support Fund per year to the Green Climate Fund, a multilateral trust fund that provides support to developing countries to mitigate and adapt to climate change.[34]

The State Department also provides policy guidance for assistance allocated through the Economic Support Fund (ESF). ESF promotes US interests by addressing political, economic, and security needs in countries of strategic importance. USAID is responsible for implementing the majority of ESF-funded programs.[37] In FY2016, Congress appropriated $4.3 billion to ESF. ESF funds have been used to finance both short and long-term efforts to counter terrorism, encourage greater private sector economic engagement, and strengthen justice systems in targeted countries, such as Afghanistan, Colombia, and Egypt. The account has also been used to fund global programs, to improve energy sectors, promote human rights, and address the threats posed by climate change.[38]

[8] State allocates $3.54 billion to USAID and $1.69 billion to HHS for implementation of programs relating to HIV/AIDS and other forms of sexually transmitted infections control.

[12] Enduring refers base or ongoing costs. The enduring and OCO sum to total appropriations for a given fiscal year.

[18] This figure includes $250 million appropriated to the National Institute of Health.

[19] This figure includes $300 million appropriated to the National Institute of Health.