After 16 years under Angela Merkel, the German federal election is just around the corner, with the chancellorship up for grabs. Rarely has it seemed so difficult to assess who will take it over. But no matter which parties form the new government, who presides over it as chancellor, and what that person’s gender is, one thing seems certain: the issue of gender equality will have to be at the top of their agenda.

The incoming government will have an opportunity to position itself as a global leader on gender equality at a time when leadership is greatly needed. The COVID-19 crisis has set back progress towards the achievement of Sustainable Development Goal 5 (“Achieve gender equality and empower all women and girls”). In parallel, a number of Germany’s neighbors have retreated from promoting gender equality, whether within European Union negotiations (e.g., Poland and Hungary’s recent push to remove references to gender from EU declarations) or in their development cooperation (e.g., the United Kingdom’s cuts to sexual and reproductive health support). In this blog, we outline the challenges of promoting gender equality, the ways in which Germany has taken recent action on this agenda, and what else is needed from the incoming government.

More from this series
Is the German Public’s Support for Development More Fragile than it Seems?
German Elections: Seizing the Moral and Economic Opportunity of Global Health Security

Germany’s Upcoming Election: How the Next Government Can Take on Global Leadership in Development

Gender equality during and after COVID-19

First and foremost, the world needs a gender-inclusive recovery from the COVID-crisis, which has disproportionately impacted women and girls globally. Recent research from the COVID-19 Gender and Development Initiative (housed at CGD) reflects the outsized negative impact of the crisis on women and girls in low- and middle-income countries. Before COVID-19 hit, women’s labor force participation, access to finance, quality employment, and pay were all already unequal to men’s, and the pandemic and global recession have exacerbated these gaps.

The pandemic has also led to setbacks for women’s and girls’ health, rights, and bodily autonomy. Due to economic hardships and people being trapped at home during lockdown, gender-based violence has increased globally. The pandemic has also caused disruptions to women’s and girls’ access to essential healthcare services, leading to increased health risks—especially for pregnant women and girls. In Eastern African countries where DSW (Deutsche Stiftung Weltbevölkerung) is active, the disruptions to healthcare systems have made women and especially girls more vulnerable to unintended pregnancies, often disrupting their education. And in Kenya, the number of girls not returning to school after the lockdown was twice as high as among boys, with unintended pregnancies and early marriage among the main causes.

What has Germany already done in response?

Our most recent snapshot of Germany’s commitments to supporting a gender-inclusive recovery from COVID-19 comes from its Generation Equality Forum (GEF) commitments. The Forum, convened in early summer by UN Women (in partnership with Mexico and France) in recognition of the 25th anniversary of the Fourth World Conference on Women and the Beijing Declaration and Platform for Action, called upon governments, international organizations, businesses, and civil society to make ambitious policy and financing commitments to advance gender equality.

In reviewing Germany’s GEF commitments, we observe a strong showing on investments in promoting girls’ education and women’s economic empowerment ($300 million in commitments, including for cash transfers for girls’ education, land titling programs, and the Women Entrepreneurs Finance Initiative), as well as countering gender-based violence ($96 million in commitments, including to the UN Trust Fund to End Violence Against Women). On the other hand, Germany made just one commitment on sexual and reproductive health and rights (SRHR), and none in the remaining three Forum categories (Action Coalitions): climate justice, technology, and feminist leadership. The lack of prioritization placed on SRHR is out of step with Germany’s focus on women’s economic empowerment. Past CGD research points to the need to see these two agendas as mutually reinforcing. 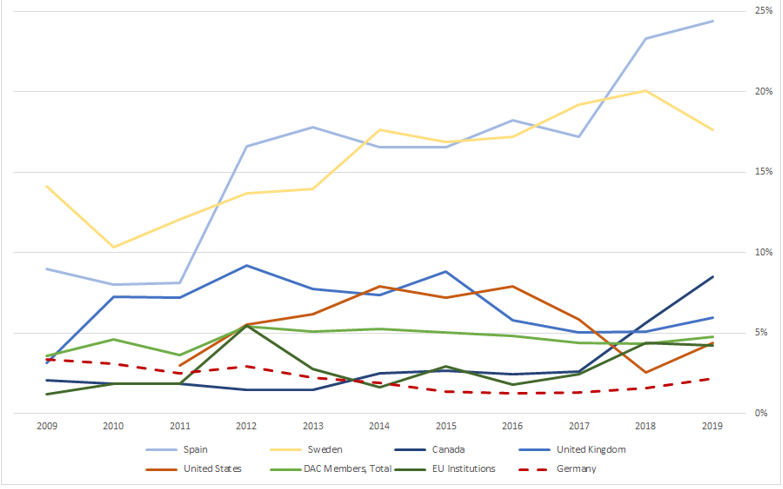 A look at overall official development assistance (ODA) also sheds light on Germany's commitment to gender equality. In 2019, total German ODA targeting gender equality as either a significant or principal objective stood at $7 billion—more than twice the amount than 10 years earlier, making Germany the second largest donor to gender equality in absolute terms. However, this corresponded to only 46 percent of its total bilateral ODA, which is far below the 2009 total of almost 60 percent, reflecting a declining prioritisation of investments in gender equality. Current numbers place Germany’s current spending just under the Development Assistance Committee (DAC) average of 47 percent. Moreover, in 2019 ODA with gender equality as a principal focus stood at only 2 percent ($329 million) while the average for DAC countries stood at 5 percent. Germany is far below the goal of spending 8.5 percent of ODA funds on projects with a principal gender focus, as demanded by the German government during negotiations on the new EU Neighbourhood, Development and International Cooperation Instrument (NDICI).

What else is needed from a new government?

There is no question that Germany has gender equality on its development agenda, but it is still nowhere near as high on this agenda as it needs to be to meaningfully contribute to achieving SDG 5. The incoming government can build on its predecessor’s investments in women’s economic empowerment, girls’ education, sexual and reproductive health and rights, and gender-based violence. The new government also needs to go farther by ensuring that gender is considered across all sectors of its development cooperation. A gender-transformative approach must become the new status quo for Germany’s development policy.

A key step in this direction would be to anchor gender equality more prominently within the Federal Ministry for Economic Cooperation and Development (BMZ) in the course of its “2030 reform process”. Currently, gender equality is neither a "core area" nor an "initiative area" of its own within BMZ’s working structure, which runs counter to the issue’s importance. With the restructuring in the course of the BMZ 2030 process, the topic of gender equality was merged with those of human rights and inclusion into a so-called “quality criteria,” aiming to mainstream these topics into BMZ’s working areas. But this merging risks decreasing focus on gender equality.

Moreover, the development of a new Gender Action Plan (GAP III) should be given a high priority. Since 2014, Germany’s engagement in the field of gender equality has been guided by a cross-sectoral strategy, while specifics and strategies for implementation were set out in a Gender Action Plan. The last Gender Action Plan (GAP II) was effective from 2016 to 2020, but has not been renewed since. A new GAP should continue the three-pronged approach of the GAP II—including gender mainstreaming, women’s and girls’ empowerment, and political participation—while setting even more ambitious goals and, unlike before, be equipped with sufficient financial resources.

Besides a strong financial commitment, the new government must improve gender analysis, impact orientation, and monitoring of gender transformative goals to ensure that Germany moves past targets oriented around financial flows to those focused on results. The monitoring framework of GAP III should include input-oriented indicators, such as those that track progress against gender-specific financing targets (an indicator that tracks the percentage of ODA targeting women’s rights organizations) and indicators around government workforce diversity. It is also pivotal to complement input-oriented indicators with those focused on outcomes. Canada’s Feminist International Assistance Policy and the indicators used to track its progress can be looked to as a model.

Finally, Germany has a near-term opportunity to exert multilateral leadership on issues of global gender equality. As G7 chair in 2022, the incoming German government has a chance to set the tone for a wider community of donor countries. Therefore, Germany should place gender equality visibly on the G7 agenda and position itself as a capable and reliable partner to further strengthen achievements in the field of women's rights, gender equality and SRHR at international and EU level.