The COVID-19 pandemic has exposed the ways in which the global health architecture was unprepared for a catastrophic health emergency, and above all, the limited and late international financing that has led to widespread disease and death. New pandemic waves threaten to derail recoveries.

More from this series
Is the German Public’s Support for Development More Fragile than it Seems?
Germany: Five Areas for COP and G7 Climate and Development Leadership

As we near the end of a second year of living with continually spreading and mutating COVID-19, Europe and Germany have both a moral and an economic opportunity to increase their commitment to global health even further. Germany can build on its expanding presence in the global health sphere and Global Health Strategy to deliver more equitable global access to vaccines and treatments for COVID-19, second to enact fit-for-purpose financing to build surveillance systems and head off the next pandemic risk, and finally to grow the country’s industrial strengths to produce and deliver highly efficacious vaccines to the world and reduce the likelihood of economic and supply chain disruptions in the future. A new German government also represents further opportunity for collaboration amongst other EU nations on initiatives like the nascent European Health Union to detect, prepare, and respond collectively to health threats. With losses from COVID-19, according to the IMF, reaching up to half a trillion dollars every month, there is no time to waste.

With the German elections at hand, we propose a high-level five-point agenda for the next Government to enhance global health security to respond to the current COVID-19 pandemic and prepare for future biosecurity risks. And while we focus on the German government, many of the proposals can be most usefully pursued in the context of the European Union—which is not the main focus of this blog.

Germany’s Role in Global Health After the September 2021 Election

1. Build on a strong track record in global health security and pandemic preparedness, and Germany’s commitment to the free flow of vaccines and vaccine inputs across borders

In response to the COVID-19 pandemic, the German government expanded its focus on global health and pandemic preparedness. Germany’s new cross-ministerial global health strategy for 2020-2030, adopted by the Cabinet in October 2020, explicitly mentions pandemic prevention as a top priority and emphasizes strengthening the multilateral global health architecture.

Germany has been a major financial contributor to respond to the current pandemic. Germany committed more than US$500 million to WHO’s COVID-19 response. To assist developing countries in responding to the impacts of COVID-19, Germany contributed €10 million to the Health Emergencies Preparedness and Response Trust Fund Program (HEPR Program) at the World Bank. The German government was also an early funder of the Coalition for Epidemic Preparedness Innovations (CEPI), contributing an initial €140 million early on in March 2020 to accelerate the development of a COVID-19 vaccine, and providing €2.2 billion to the Access to COVID-19 Tools Accelerator (ACT-A), most of which is going to support the vaccine platform COVAX. In addition, Germany contributes via the EU financing mechanisms another roughly €1 billion. Germany is thus second in financial contributions, coming behind the US, which is estimated to have donated roughly $6.2bn USD. 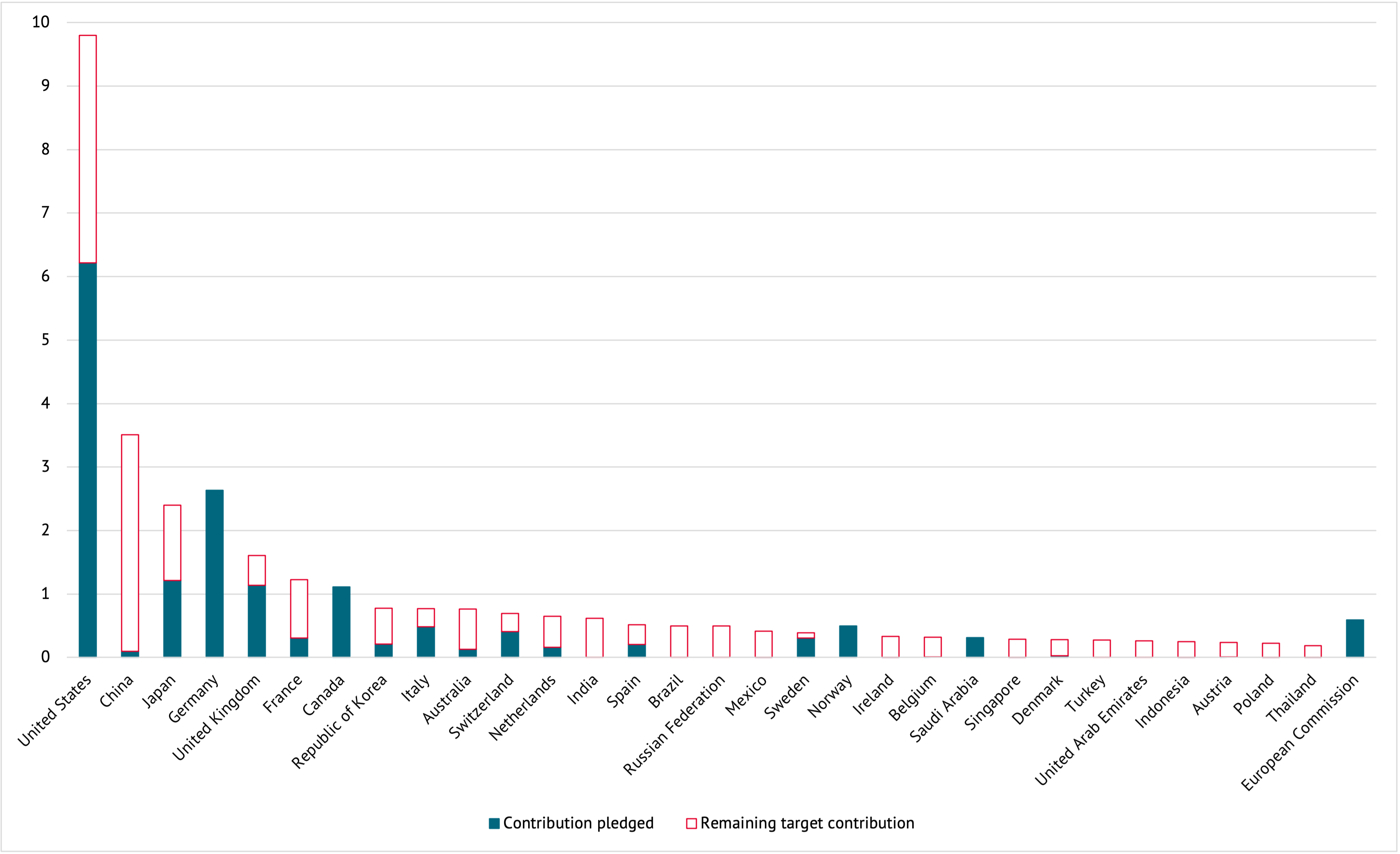 Source: WHO (2021) Access to COVID-19 tools funding commitment tracker. Note: chart shows contributions pledged to ACT-A as of 3 September 2021, relative to the ‘fair share’ benchmarks as calculated by the WHO. Pledges by Germany, Canada, Norway and Saudi Arabia exceed their benchmarks, and no benchmark is given for the European Commission. The calculation of the fair shares is inspired by the IMF quota and based on GDP, economic openness and GDP per capita to include progressivity.

Further, the WHO and Germany recently launched a new Hub for Pandemic and Epidemic Intelligence based in Berlin in September 2021, a global platform to predict, detect, and respond to pandemic and epidemic risks worldwide.

Beyond aid, production of vaccines in Germany and the EU has been critical for the global supply. Notably, as of early August, firms based in Germany had produced more than 200 million vaccine doses for export, honoring purchasing contracts with 138 countries and avoiding export bans. This strategy stands in sharp contrast to the US and Indian governments’ moves towards protectionism and nationalism during the same period.

In a new or next government, Germany should continue the trajectory by pushing harder on domestic vaccination coverage while accelerating the effort, together with the rest of Team Europe, to donate more surplus vaccine doses more quickly to lower-income countries via COVAX.

Financing across the multilateral system should be sustained. In Germany, as elsewhere in the world, policy alignment and collaboration across the range of related ministries, as well as the federal states, is necessary for a coherent and high-impact approach to pandemic preparedness and response.

2. At the G20 and the G7, work with counterparts to enhance coordination and financing for pandemics to deliver greater equity in the COVID-19 response and better preparedness for the next pandemic risk

The G20 and G7 are key opportunities for both formal and informal “peer pressure.” Germany is well-placed to use its voice and perspectives to encourage action and commitment to these issues from its high-income country cohort.

The G20 issued the Rome Declaration in May 2021 with calls for enhanced coordination and investments in long-term pandemic preparedness, prevention, detection, and response, as well as surge capacity. The G7 echoed that call in June of 2021 via the Carbis Bay Communiqué, but failed to identify ways to implement its vision for pandemic preparedness and response. In July of 2021, the G20 Finance Ministers and Central Bank Governors welcomed the report of the G20-mandated High-Level Independent Panel on Financing the Global Commons for Pandemic Preparedness and Response (HLIP) in which we both participated.

Now is the time for clearer actions. Germany is actively engaged in the deliberations around the report’s recommendations as part of the G20 Finance and Health Informal Group, convened in follow-up to the July meeting to take forward the HLIP’s recommendations. Germany should work with allies to drive an ambitious and effective new governance or oversight body and multilateral financing mechanism to ensure predictable global financing and effective use of those funds to meet standards for pandemic preparedness and response worldwide.

Germany’s presidency of the G7 in 2022 also represents an opportunity to push forward the commitment to pandemic preparedness and prevention and with a tangible roadmap forward for the long-term prioritization of and institutional arrangements for pandemic preparedness.

Given its leading role in international development financing (#2 in OECD Official Development Assistance), Germany should push to make global public goods, especially for pandemic security, part of the core mandates of the World Bank and other MDBs.

Financing global public goods can be operationalized as part of the World Bank’s Green, Resilient and Inclusive Development (GRID) approach, to make long-term, integrated, and sustained development progress. The German government, in collaboration with other countries and the World Bank, can be instrumental in advising on the institutional, operational, and financial arrangements required to make those changes happen. Germany has long been a key voice for global public goods financing in the reform and renewal of the global health and development finance agencies, and supported the creation of the pilot Global Public Goods financing window at the World Bank.

At bare minimum, Germany should increase its contribution to IDA20 at the World Bank, given the COVID-19 catastrophe, while also urging World Bank management to include a cross-cutting theme on crisis preparedness in IDA20. Germany could also consider expanding access to concessional resources to create incentives for pandemic preparedness borrowing by co-financing IDA operations and buying down IBRD terms for lending in middle-income countries for this purpose. MDBs are uniquely placed to incentivize investments in pandemic prevention and preparedness at country and regional levels, complementing their existing lending, and Germany can capitalize on those functions.

4. Maintain support for the WHO

Germany is the top funder to the World Health Organization (WHO). Its contributions to the WHO, including assessed and voluntary, made up nearly 12 percent of all funding in the 2020-21 biennium. (See more on Germany’s role in global health here.) Germany should continue its strong commitment to ensuring that the WHO is financed adequately and predictably, and thus able to perform its necessary functions. But Germany can also leverage its crucial position as a top funder to pressure the WHO to increase transparency in its practices and advocate for a system of institutional checks and balances that is executed properly. While the WHO’s role is critical, it is just one piece of the puzzle.

5. Grow Germany’s industrial strengths to produce, partner and deliver highly efficacious vaccines and other related products to the world

German firms are now major players in biotech, and this represents a win-win for Germany and the rest of the world. It is a significant economic opportunity for Germany but also a huge opportunity for the world. BioNTech’s new investments in production in Germany can boost not only EU but world supply of highly efficacious vaccine and its active ingredients. Economically, the BioNTech success has also been a big net positive for Germany’s economy. While CureVac itself reported poor results on its vaccine candidate, our PIIE colleague Chad Bown suggests that much of that company’s supply chain could repurposed to make one of the other mRNA vaccines. Germany can lead this repurposing. There are also opportunities to expand voluntary technology transfer and partnering to assure distributed production and ever-warm manufacturing around the world. The initial 50 million euro investment in South Africa is a good start but much more can be done.

Global health security and preparedness also represent areas for continued cooperation within the EU, in which Germany can play a large role. In last week’s State of the Union, President Ursula von der Leyen doubled down on her commitment to building a European Health Union and proposed a new health preparedness and resilience mission for the whole EU, calling for an investment of €50 billion by 2027. The new German government should play its part.