The Promise (and the Limits) of Digital Technology to Empower Women 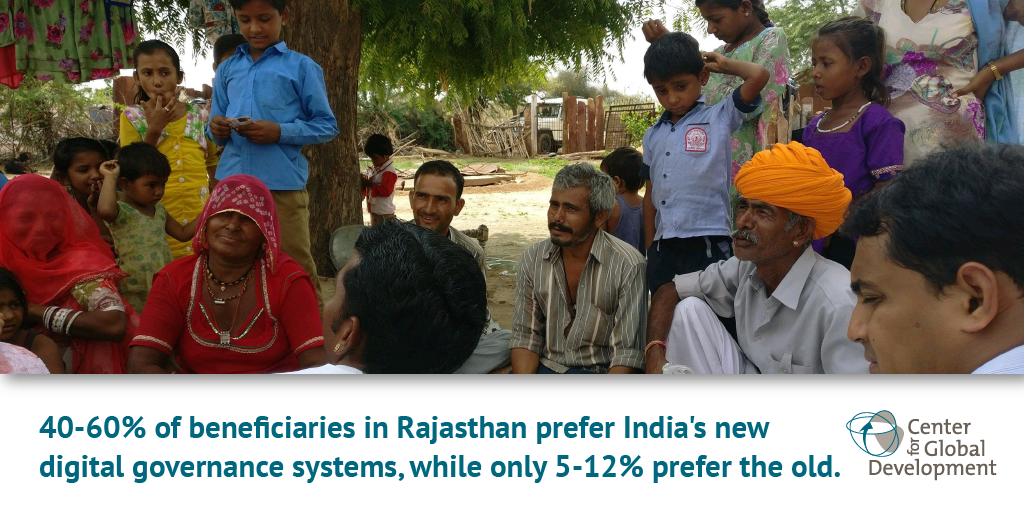 Women’s economic empowerment is a holy grail for both policymakers and women’s advocates but is recognizably difficult to attain. Data from India, Indonesia, and Tanzania offer preliminary evidence that the smart offering of digital products to women, both mobile financial services (especially savings) and digital IDs, can be transformative. That such modest interventions can upend power relations, however impermanently, offers cautious optimism that the ongoing revolution in digital technologies can help change entrenched social norms that keep millions of women in subordinate positions in the family.

Digital money makes it cheaper to provide financial services, and digital ID expands access to these services. When well-designed digital products target women as individuals (separate from husbands and family) and provide them with privacy to make financial decisions, they boost women’s economic independence and say in household decision-making, as our evidence points out. The data comes from two RCTs that CGD and our partners conducted in Indonesia and Tanzania, providing mobile-savings and business training to women microentrepreneurs, and from CGD’s exploratory research on digital governance platforms in Rajasthan and Andhra Pradesh states in India.

In both Indonesia and Tanzania, women microentrepreneurs who were encouraged to open mobile-savings accounts reported having greater household decision-making power compared to women who were not offered mobile savings. The empowerment effect in Indonesia was present for women who received financial literacy training and worked with branchless bank agents who received high financial incentives to sign up new customers (and were told that it was good to target women). The effect was picked up shortly after the training ended and was concentrated among the least empowered women at baseline (see figure 1). 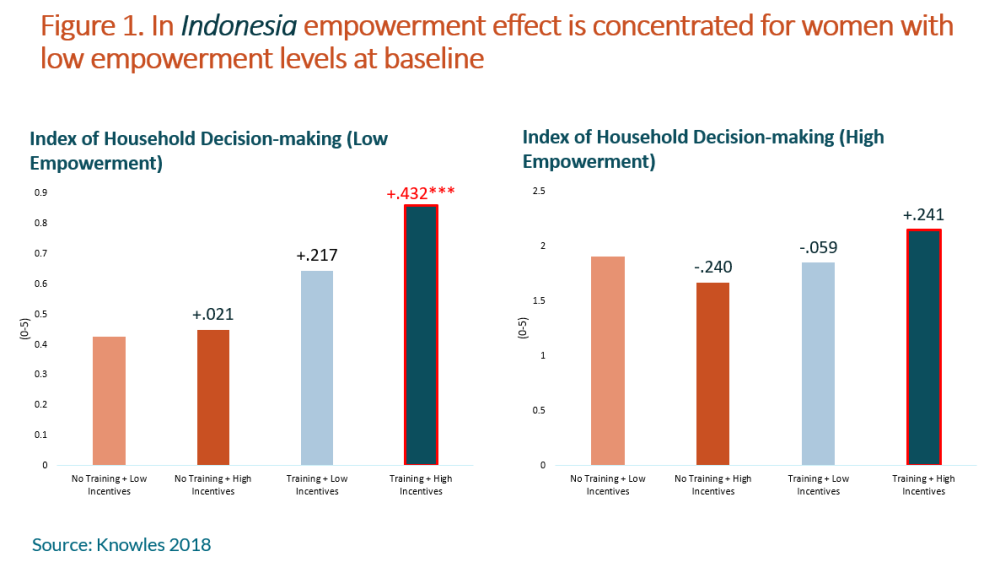 In Tanzania, the empowerment effect of access to mobile savings was evident a year and 18 months after the intervention ended (see figure 2). 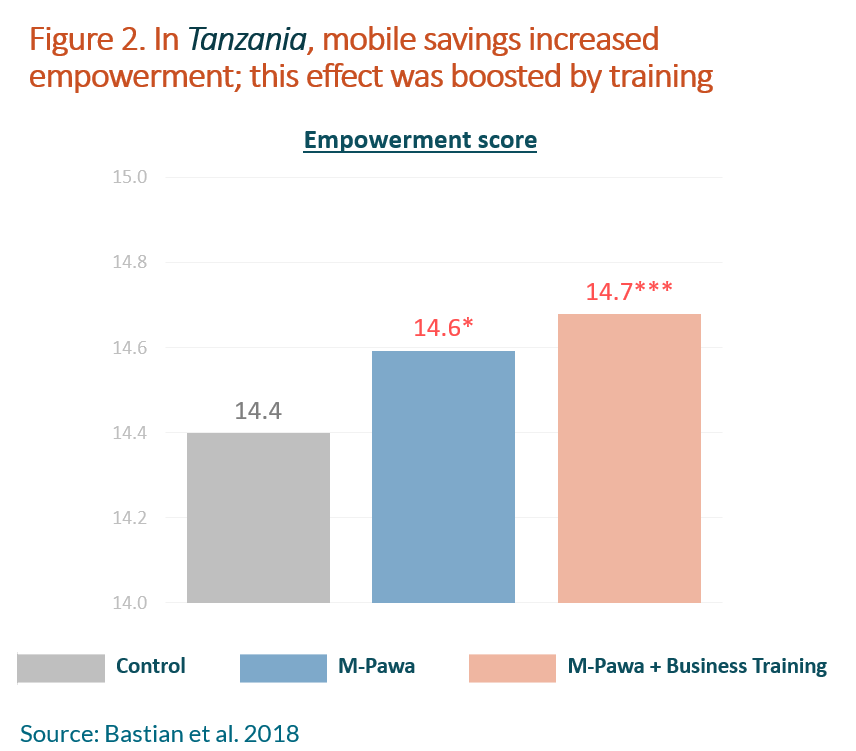 In Rajasthan state in northern India, a government mandate to designate women as heads of households to receive direct benefit transfers contributed to a major push towards their financial inclusion. Two-thirds of the women heads of households did not have a bank account before this initiative started in 2014. Some changes in social norms are also visible—more than half of the women visit bank branches either alone or accompanied by a male member of the family (see figure below). In Krishna district in Andhra Pradesh, women were also more comfortable transacting with female business correspondents (bank agents), providing an incentive for financial institutions to actively recruit female BCs as a way of expanding their client base. 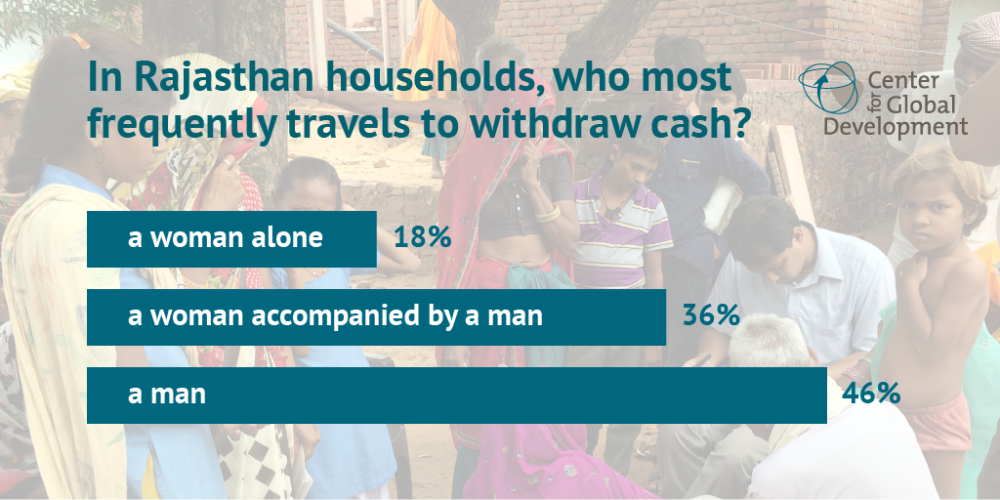 Several obstacles, however, limit the promise of digital financial technologies for women. Empowerment effects may be transitory and, if not reinforced, may disappear, as some research has shown. An important question for future research is, “What does it take to maintain and build on these effects?” Importantly, gender inequalities in access to financial services and digital technologies are significant and hard to overturn. The global gender gap in access to bank accounts has not budged over three iterations of the Findex survey. Lastly, to push the frontiers of financial inclusion, digital products require digital security, privacy, and robust technology ecosystems and networks with women customers in mind. Leveraging digital technology can help, but fintech itself cannot close the gender finance gap—governments, financial institutions, and the private sector need to get on board.

So, what else can we do to move the needle on women’s digital and financial inclusion?

In emerging markets, there are especially low levels of bank penetration. Distance to bank branches still prevents women from accessing banking services. The Global Findex also affirms that most women avoid formal financial systems because of capital constraints and lack of trust in the institutions. This discourages savings and excludes them from receiving public benefits that are delivered directly to bank accounts. While mobile-based financial access has managed to bridge this gap to some extent in a small set of countries, full financial inclusion cannot occur without addressing these supply-side issues.

From our survey of women and men entrepreneurs in Indonesia, we find that differences favoring men entrepreneurs in access to information technologies and financial services are only partly explained by differences in characteristics that give men a head start in business, suggesting that social customs and gender discrimination account for the remaining differential. Bias (intentional or unintentional) against women clients has long excluded them from participating meaningfully in the economy—and this has led to historic distrust in financial services. An IMF working paper similarly cites gender bias in laws and attitudes as a significant explanation for women’s exclusion from banking.

Thankfully, gender bias is not destiny. India, for example, has closed the gender finance gap from 20 percent in 2014 to 6 percent within three years owing to a government-led push. As our Indonesia data shows, well-designed incentives can also change attitudes of financial service providers that adversely affect women. Women’s financial inclusion should be viewed as a way for banks to expand their client base, which is also reflected in our Andhra Pradesh survey. There are many ways to do this: encouraging agents to target women as clients, hiring women employees, and creating accessible branches. Banks should also commit to collecting and sharing good sex-disaggregated data to analyze women’s usage patterns.

2. Create products and services for women

Changing biases in financial services also means challenging our assumptions around the sorts of products women use and their ability to do so in a digital environment. Digital products must be easy to use, private, and reliable. Women are more likely than men to use savings products if they are accessible and demonstrably secure. Digital intermediaries can help by lowering barriers to access and increasing women’s trust in the financial system generally.

A CGD study of digital governance platforms in the Krishna district of Andhra Pradesh illustrates many of these dynamics. Krishna has been a trailblazer for India’s Aadhaar platform, which allows the government to biometrically identify recipients of social services and subsidies (such as cooking gas and social pensions). Our study shows that people think about these new digital systems with nuance and are mindful of the tradeoffs between access and convenience. We see that the experience of authentication is vital: nobody likes it when their fingerprints fail to register, so points of service must have backups—like iris scans or facial recognition systems, one-time passwords, or two-factor authentication.

The payoff is worth it. In Krishna, approval rates range from 70 percent (food ration deliveries) to 97 percent (land record digitization). People like the predictability and consistency of digital systems. The survey sampled 562 households that were receiving some kind of government benefit and was two-thirds female. We find women express stronger preferences relative to men for the consistency of digitally delivered benefits. They also appreciate the increased control over their benefits, increasing their agency over entitlements and subsidies.

Face-to-face interaction with female bank agents also improves women’s account use. All this demonstrates the importance of creating familiar pathways for women customers to easily access their accounts. We also interviewed 45 bank agents in Krishna—73 percent of whom were female. All the women we interviewed say the job gives them respect as a woman, and 89 percent like it because they think it is important job. Working as a banking agent seems to offer flexibility for them as women, and banks have expressed a preference for women because customers are more comfortable with them—which aligns with our finding that almost four-fifths of the banking agent users in our household survey are women. Not only do female banking agents serve other women, but they report serving pensioners and daily wage laborers more than their male banking agent counterparts. Thus, empowering women to serve as digital translators for their peers can have positive spillovers onto other marginalized populations.

The important point is that the biggest changes happen when countries leverage and coordinate with technology ecosystems to ensure women’s and men’s access to, and use of, the formal financial system. India’s strategy to use Aadhaar as a valid know-your-customer (KYC) document was an important factor in the success of its universal financial inclusion program (Jan Dhan Yojana). Our studies in Tanzania and Indonesia similarly depict that mobile technology bolsters the impact of traditional empowerment strategies like business training on women’s savings and financial behavior.

Digital technologies can expedite financial inclusion policy goals—especially for women. But technology alone cannot close the gender gap. There must be continuous policy commitment to equality for equality’s sake and an aligned effort to leverage fintech for all.