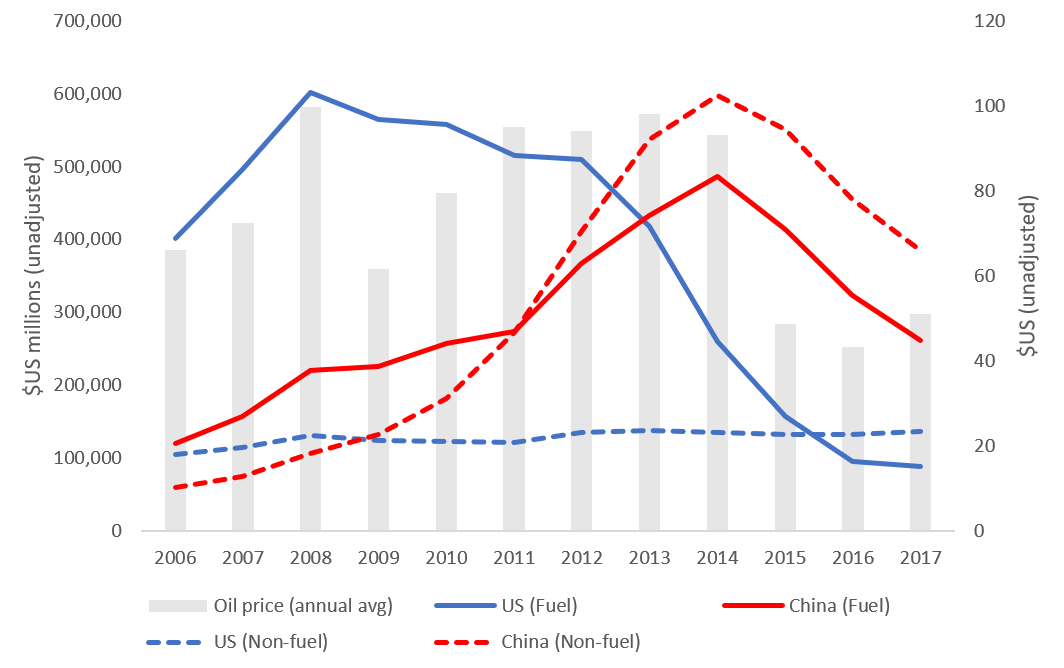 Prosper Africa Promises to Double Two-Way Trade and Investment between the US and Africa: But What’s the Starting Point?
Sarah Rose
July 02, 2019

The United States’ commitment to increasing American private sector investment in Africa would seem to be encapsulated in the Trump administration’s Prosper Africa initiative. Announced in June at the Corporate Council on Africa Conference in Mozambique, Prosper Africa promises to double two-way trade and investment between the United States and Africa by providing services that lower investment risk (e.g., loan guarantees), connecting US and African firms, strengthening US trade and investment hubs, and pursuing new bilateral trade agreements. As part of Prosper Africa, the US government will also develop country strategies for improving private investment and financing, removing constraints to growth, and identifying and addressing policy, regulatory, and logistical barriers to greater trade and investment.

CGD’s Gyude Moore has a series of smart recommendations for how the US government can help Prosper Africa deliver on its promise. This blog adds one more: USAID should make growth diagnostics a central analytical tool for informing Prosper Africa’s country-level strategies.

A growth diagnostic is an analytical approach developed in the early 2000s by Harvard economists Ricardo Hausmann, Dani Rodrik, and Andres Velasco. It emerged from the recognition that in order to be successful, reforms designed to boost growth must account for the political and economic conditions in which they are undertaken. In other words, context matters. The same approach doesn’t work everywhere. The growth diagnostic analysis uses an ordered, data-driven process to identify a particular country’s most binding constraints to generating the private sector activity that drives broad-based economic growth. It’s not an exact science. But the findings allow for informed conversation about how to prioritize and sequence growth-oriented investments and reforms.

Several donor agencies, including the World Bank, conduct or fund growth diagnostics, but the US government’s growth-focused Millennium Challenge Corporation (MCC) was the first to embrace them as part of the agency’s standard operations. One of the first tasks new MCC partner countries assume is a constraints analysis (done jointly with MCC) to identify the most pressing factors that limit private investment and economic growth. The process helps to narrow and define the range of investments MCC will fund and guide decisions away from options that are informed more by narrow political interests than by evidence.

As the table below indicates, transport, energy, and governance have been prominent constraints among the 16 African countries with MCC growth diagnostics. But it also shows considerable heterogeneity among constraints across countries, demonstrating the importance of contextual country-level analysis. (Note: Growth diagnostic reports go into much more detail about what, specifically, within each of these broad sectors constrain growth.)

Please note: Use the horizontal scroll bar at the bottom of the table (swipe on mobile) to view all areas.

The State Department and USAID have sought to ramp up their use of growth diagnostics in more recent years, but coverage remains modest. Since 2011, USAID has done growth diagnostics for just 23 countries—and only two are publicly available (neither are in Africa). The 2015 Quadrennial Diplomacy and Development Review promised to conduct at least one country-specific growth diagnostic or constraints analysis per geographic region per year. But while notable, it’s not a terribly ambitious target, when you consider that Africa has more than 50 countries.

That said, it is a bit difficult to see the incentive for USAID to have invested much more in growth diagnostics than it has. With the agency’s budget allocations driven substantially by congressional spending directives and administration priorities, missions have little flexibility to adjust their programming to respond to the analyses’ findings.

But—if bolstered by strong political leadership and commitment—Prosper Africa could change the calculus. Fostering American private sector investment in Africa has become an expressed development and foreign policy goal of the Trump administration. Though Prosper Africa doesn’t come with significant new resources, its increased priority may help inform some within-agency allocation decisions. And within the context of USAID’s new “Journey to Self-Reliance,” which (commendably) steers the agency away from new, sweeping, sector-based initiatives in favor of creating partnerships that seek to understand and help address country-specific barriers to development, there seems to be a heightened policy rationale for shifting funding (where possible) to help address specific identified constraints to growth.

In addition, the US government is keen to sell its partnership as a better alternative to China’s. US officials often characterize China's lending practices as predatory and contrast them with the US emphasis on “self-reliance.” China is also often perceived as a willing financier of investments whose value is more strategic than growth-focused. By using evidence-based diagnostics to frame its support for improving the private sector enabling environment, the United States can help reinforce the distinction that it wants to draw.

USAID wouldn’t have to start from scratch. The agency likely has growth diagnostics for a handful of African countries. And USAID can make good use of high-quality diagnostics done by others, including MCC, the World Bank, and the African Development Bank. In identifying countries to analyze, USAID should take into account the quality and age of previous diagnostics. Only five of MCC’s constraints analyses for African countries have been done in the last four years. And while growth diagnostics don’t have an expiration date, per se, they’re worth renewing every three to four years. MCC’s two constraints analyses for Senegal, done a decade apart, show that binding constraints can shift some over time.

At the launch of Prosper Africa, USAID Administrator Mark Green highlighted that Prosper Africa would be demand-driven and private-sector led. USAID can help bolster the demand of American private sector actors by supporting African countries in tackling the constraints that deter foreign investment. Using an evidence-based analytical framework to assess priority areas for USAID support would be a solid first step.