Prosper Africa Promises to Double Two-Way Trade and Investment between the US and Africa: But What’s the Starting Point? | Center for Global Development | Ideas to Action Skip to main content

Prosper Africa Promises to Double Two-Way Trade and Investment between the US and Africa: But What’s the Starting Point?

While visiting Maputo in June, Deputy Secretary of Commerce Karen Dunn Kelly and USAID Administrator Mark Green outlined a new vision for expanding private sector activity between the United States and the African continent. Their remarks put flesh on the bones of the administration’s “Prosper Africa” initiative—first unveiled by National Security Advisor John Bolton back in December. In the intervening months there were plenty of questions about how the US government would seek to deliver—particularly when it came to “advancing U.S. trade and commercial ties with nations across the region to the benefit of both the United States and Africa.”

And the new announcements highlighted an even bolder goal—to double two-way trade and investment between the US and Africa. To get there, the Trump administration proposes creating a one-stop shop of US government support for US companies looking to expand their trade and investment in Africa and negotiating at least one new bilateral free trade agreement (FTA) on the continent. (The US has an existing free trade agreement with Morocco that was signed in 2004, but that’s it.)

The initiative has little new money behind it—just $50 million, which, as a point of reference, is half the (FY17) budget for neglected tropical diseases. But under the banner of Prosper Africa, US agencies—jointly led by Commerce and USAID, with a big role envisioned for the new US International Development Finance Corporation, will increase services to lower investment risk (e.g., loan guarantees, market intelligence); build greater awareness among the US private sector of the deal facilitation tools and services the USG offers; help match US and African companies in the same supply and value chains; expand and strengthen US trade and investment hubs; leverage USAID’s private sector teams to help facilitate deals; and provide support for trade and regulatory reform in African countries.

So what would it look like to achieve two-fold growth? To answer that question, it’s important to look at where things stand now.

Trade and investment between the US and Africa have been on the decline in recent years, so the new commitment will require reversing current trends. Between 2013 and 2015, US foreign direct investment (FDI) to Africa dropped from $61 billion to $50 billion. Even so, the United States remained the third largest source of FDI on the continent behind France and the Netherlands. China, with the massive infrastructure financing of its Belt and Road Initiative, isn’t far behind (though there are signs the Chinese lending boom to Africa may be slowing). 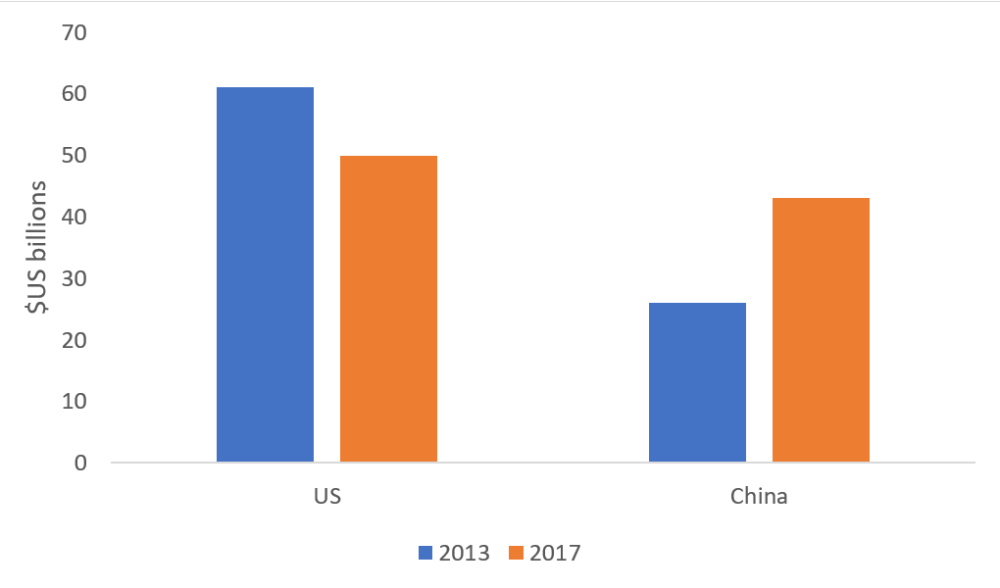 When National Security Advisor John Bolton first mentioned Prosper Africa during his speech launching the White House’s Africa Strategy late last year, his remarks focused heavily on the threat of Chinese lending and investment to both African and American interests and expressed the administration’s motivation for the United States to offer a competitive alternative. While the recent Prosper Africa launch was considerably lighter on China-related rhetoric, instead seeming to emphasize the role of the US private sector, Green’s references to the debt-trap risks brought by “authoritarian funders” reminded audiences that Prosper Africa is, in no small part, a component of the US response to growing Chinese commercial dominance in the region.

US exports to Africa are fairly diversified, but fall largely in the categories of capital goods, industrial supplies, and transport equipment. 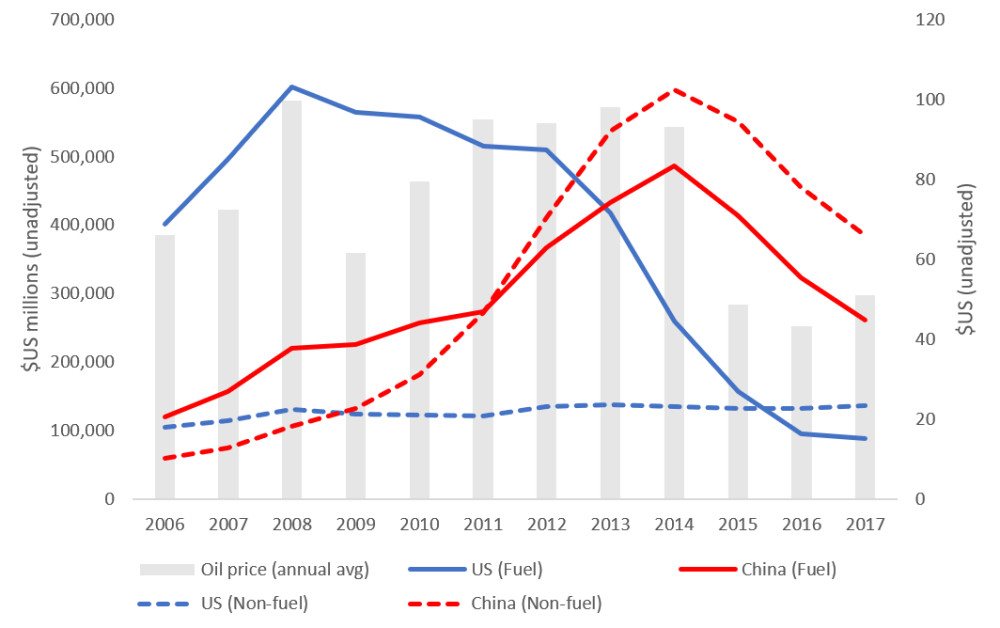 Like exports, imports to the US come primarily from just a handful of countries. Three quarters of all imports (2016-2018) come from South Africa, Nigeria (mostly oil), Angola (also mostly oil), and Cote d’Ivoire. Forty-five other Sub-Saharan African countries currently export relatively little to the US.

Through Prosper Africa, the US government is looking to deepen commercial relationships with these largest trade partners. The Department of Commerce has signed MOUs with Cȏte d’Ivoire, Ethiopia, Ghana, and Kenya to increase bilateral trade and investment. An MOU with Mozambique—which isn’t currently among the largest US trade partners but is attracting massive US investment into its burgeoning natural gas industry—is forthcoming.

The Office of the US Trade Representative has also promised to develop at least one new bilateral free trade agreement on the continent. As evidenced in the chart below, the example of Morocco—the United States’ only bilateral FTA in Africa—demonstrates that such agreements can boost trade flows.

Figure 5: US-Morocco trade after the signing of the bilateral FTA

But tempering expectations for the realization of multiple FTAs (or even one) with African countries may be warranted. Of the 20 countries with which the United States has free trade agreements worldwide, three-quarters are upper-middle or high income (while most African countries are low or lower-middle income). What's more, the United States just hasn't been developing many new FTAs recently. In the past 10 years, only two new agreements have been finalized.

Furthermore, with the entry into force of the Africa Continental Free Trade Agreement (AfCFTA) last month, bilateral trade agreements could be somewhat of an outdated, overly narrow pursuit. Yes, half of the world’s 10 fastest growing economies are in Africa, but the market size of individual African countries remains relatively small. The GDP of the Chicago metro area is nearly double that of even the largest individual African economies (Nigeria and South Africa). The AfCFTA, on the other hand, has become the largest free trade area in the world with a combined GDP of over $3 trillion. As others of have previously suggested, there may be merit in thinking about how future trade agreements can help foster regional integration, both for the growth and development outcomes they can bring as well as for the benefit of US firms which stand to gain access to a major, growing market.

Thanks to Erin Collinson, Kim Elliott, and Scott Morris for helpful suggestions.