COVID-19 and Girls' Education: What We Know So Far and What We Expect

The potential impacts of the COVID-19 pandemic on girls’ education are numerous and diverse. Most obviously, many schools around the world remain closed, affecting girls’ education directly. But both research and advocacy pieces highlight a host of other potential concerns that either directly or indirectly affect girls’ education and ultimately, their overall wellbeing. Thus far, most of the data from the current epidemic relates to access to distance learning. It’s too early for us to predict with confidence the impact of the pandemic on dropouts and longer-term outcomes. But research from previous pandemics and initial findings in this one can give us clues. Many of these channels affect boys’ education as well.

What we can learn from previous school closures and crises

Much of what we hypothesize about the impact of this crisis draws on what we learn from previous crises. The figure below summarizes some of these channels. Let’s start with the most obvious: school closures lead to learning loss. We know that’s true even during non-emergency school closures, in both rich countries and poor countries. Those learning losses can endure: after schools closed for more than three months due to an earthquake in Pakistan, children’s learning levels were significantly lower, even several years after schools had re-opened. Kids who fall behind in school are more likely to drop out later. We also know that during school closures, girls may be tasked with more household work, including childcare, which can further cut into learning time.

Note: Click here for a more detailed version of this figure which including references to where and when each channel has been documented. 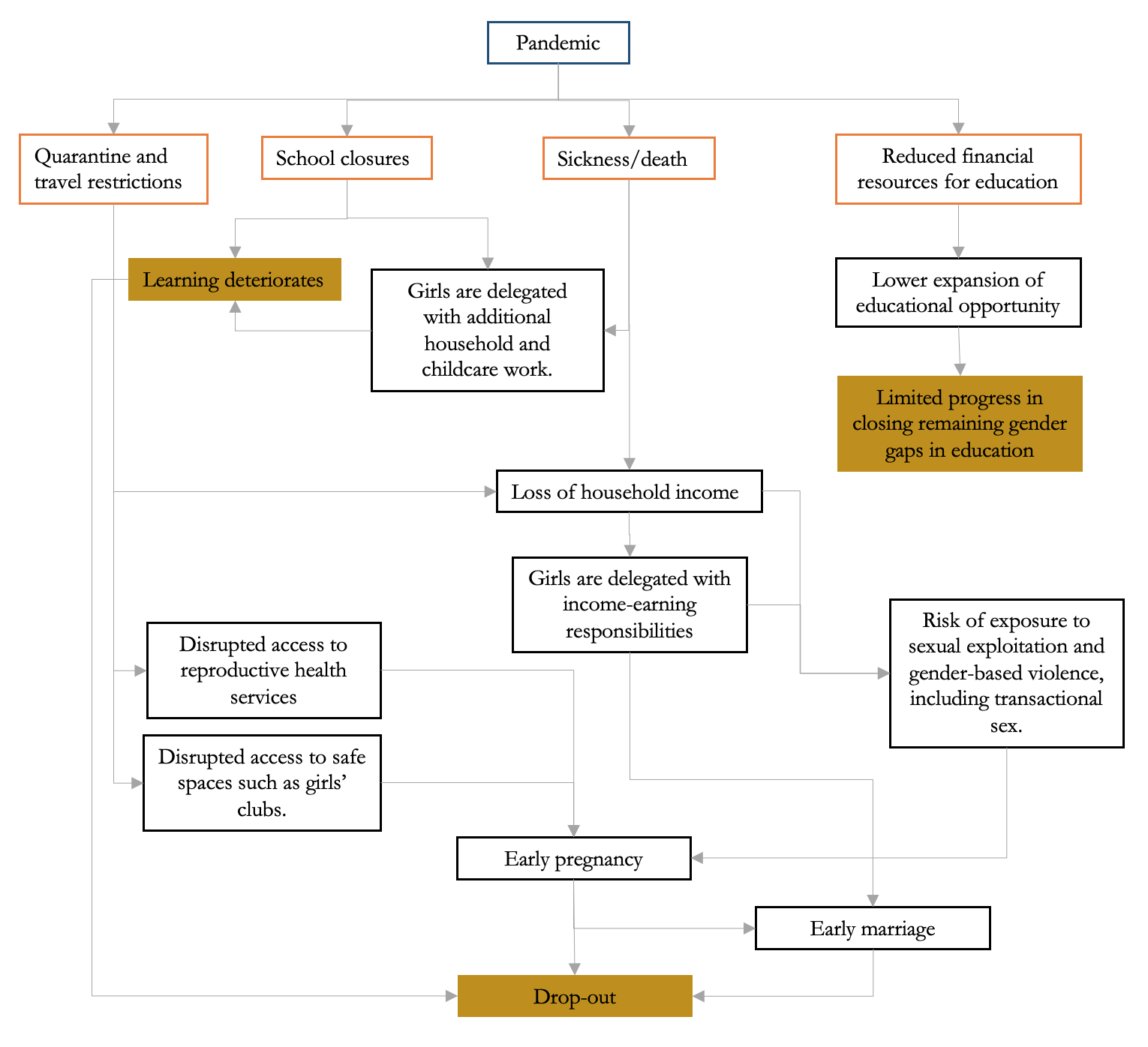 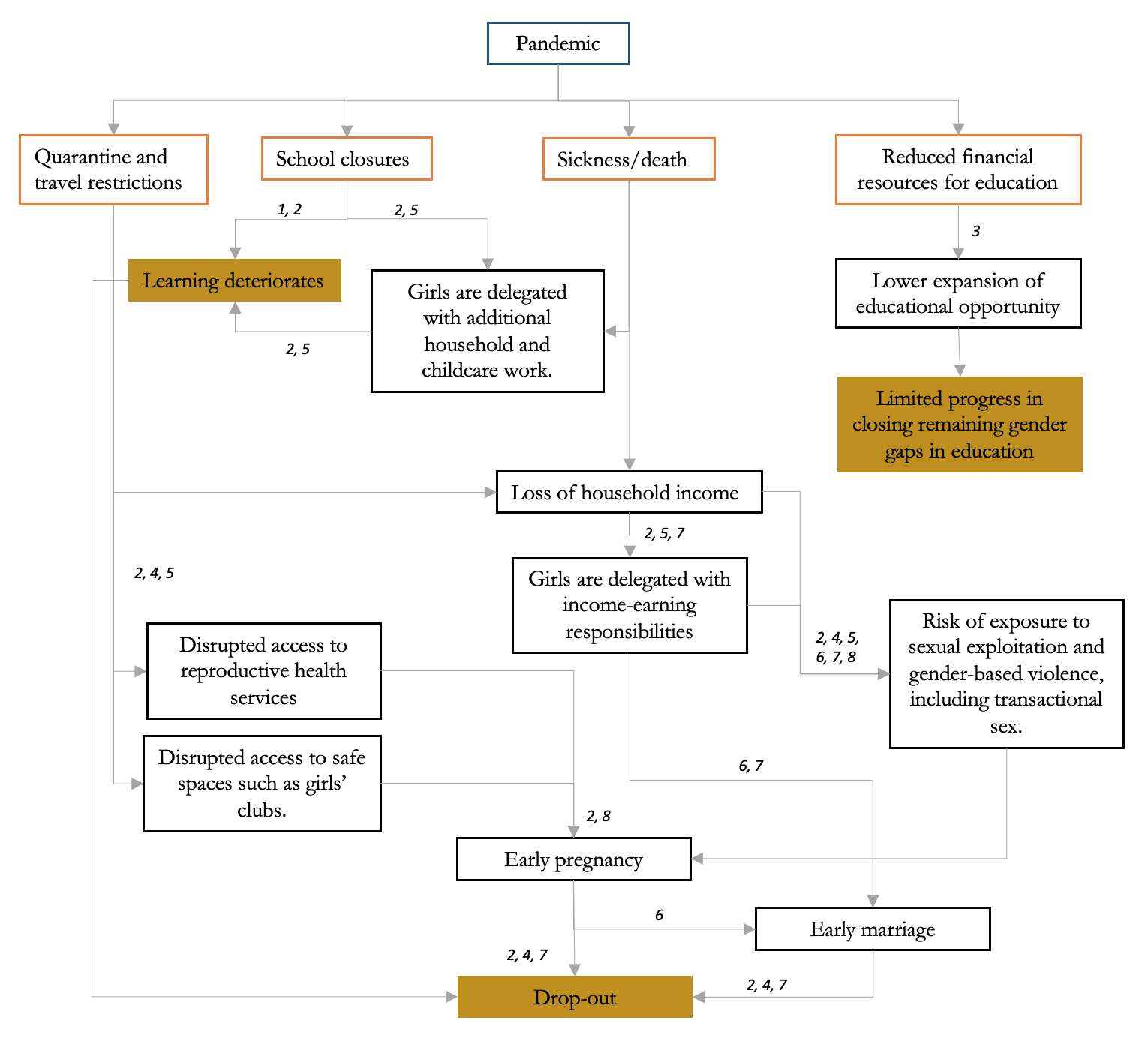 With a health crisis like the COVID-19 pandemic (or the Ebola epidemic before it), sickness and mortality among parents or other household members also interferes with girls’ education by at least two channels (beyond the trauma of losing a parent, in the case of mortality). First, losing a parent may result in reduced income and so a greater need for children to work for pay. In the wake of the Ebola epidemic, girls in Sierra Leone reported gathering stones to sell, selling fruit in the market, and buying and selling scrap metal, among other activities. In some cases, it can even mean transactional sex. In Liberia during the same crisis, girls sometimes became the main income earners in their households. Second, girls may become primary caregivers for sick members of the families and for younger siblings. All of these responsibilities pull girls away from school, sometimes permanently in cases where girls become the household breadwinners. While there have been fewer cases of and deaths from COVID-19 in African countries, other developing regions—like Asia and Latin America—have been hard-hit, with more than 96,000 deaths in India and more than 141,000 in Brazil.

The combination of school closures and the disruption of other health services can translate to increased likelihood of adolescent pregnancy, which—despite recent, laudable moves in several countries to make it easier for girls to return to school—still makes getting back to the classroom more difficult. Travel restrictions likewise can reduce access to both reproductive health services and to “safe spaces” like after-school girls’ clubs, which can also translate to increased adolescent pregnancy.

Loss of household income can also lead to girls marrying young as a means to generate income for the family through their dowry, especially if compounded with unplanned pregnancy. During the early part of the Ebola crisis, some families opted to send away their children to communities deemed to be safer from the disease, which in some cases exposed the girls to potential sexual abuse by foster parents or guardians. This seems to be less of a concern during the current pandemic, partially because travel restrictions were often implemented with wide coverage and short notice.

Finally, an effect not from school closures directly but from previous health and financial crises is that education budgets may get crunched, both at the national level and at the household level. During the East Asian financial crisis in the 1990s, pre-existing disparities between boys and girls were exacerbated. Many countries still have gender gaps in access to secondary education, and budget crunches may slow down the expansion of secondary school, limiting opportunities for girls.

What we know so far from this pandemic

Many of the same channels likely apply in the current pandemic, but data remain limited. In terms of access to learning opportunities while schools have been closed, there is no single story that applies across low- and middle-income countries. A study of adolescents in Ecuador found that girls were both studying more and doing more housework than boys. Across multiple countries, girls reported either less confidence in their computer skills—relevant for distance learning—or less access to the internet. But in other countries (Ethiopia, Peru, and Vietnam), girls have reported at least slightly more access to ongoing educational opportunities than boys. And in other places (Kenya), the numbers are equal.

We haven’t yet seen actual data on dropout rates. UNESCO predicts comparable rates of risk of not returning to school for boys and for girls, which translates to 5.2 million girls in primary or secondary school at risk. The Malala Fund does predict differential risk to girls based on experience in past epidemics, and a survey of head teachers in Ethiopia predicted higher dropout rates for girls in the wake of the school closures. A cross-country survey of frontline service organizations reflects similar concerns that girls will be more adversely affected than boys by school closures. Beyond access to distance learning and school dropouts, there are reports of greater mental health difficulties for female medical students in the Philippines and of significantly more time doing housework for girls than for boys in Thailand.

The first measures of learning loss (from a high-income country) don’t report gender differences (remember, researchers, disaggregate your findings by gender!), but they do indicate both significant learning loss on average and increasing inequality both within and between schools.

On net, the early indications on access to distance learning do not suggest dramatic, consistent, cross-country gender inequality. But for the outcomes that matter most— getting girls back into schools as they re-open—we just don’t yet have the data.

This post is focused on girls’ education, and while girls face unique obstacles (like disproportionate consequences from adolescent pregnancy), boys face challenges of their own. While child labor in general has been falling over the past two decades, that reduction has come faster for girls than for boys, especially in older age brackets. Boys enter the labor market earlier and in larger numbers than girls and are more likely to work outside of their homes, often as farmhands (e.g., the majority of child laborers work in agriculture). Boys also face the risk of being recruited to militias in areas of unrest, especially with extended school closures. The current pandemic threatens to disrupt recent gains in children’s rights for both girls and boys.

In the coming months, researchers working in countries around the world will continue to document the impact of the crisis on girls’ education and on their well-being more generally. At the same time, failing to act in the absence of better data is a losing strategy. By the time numbers come in documenting increased adolescent pregnancies and dropout rates, the window of opportunity to help at least some of these girls most effectively will have closed. So, what to do? Learn from past crises and invest in no-regret policies. Make sure that girls have access to information and resources for reproductive health, social safety nets to mitigate the need to enter the labor market (particularly in high risk work), and as schools open, ensure that communities and schools make targeted efforts to get girls—and ultimately, all vulnerable children—back in the classroom.

The order of authors of this blog post was determined randomly. This post benefitted from suggestions by Shelby Carvalho, Susannah Hares, and Rita Perakis.