How Much Will COVID Cut Education Budgets?

COVID-19 has had an immediate impact on education. With schools closed in virtually all of Africa, Asia, and Latin America, children—especially the most vulnerable—are forgetting what they’ve learned this year. If past school closures are any guide, some children won’t come back when schools re-open.

But that’s not the worst of it. School systems run on money. It’s impossible to provide access to schooling without financial resources (there’s no teacher salary fairy), and despite occasional claims to the contrary, the best evidence suggests that the quality of education is also responsive to financial resources.

Before the outbreak of COVID-19, global growth was projected to be 3.3 percent. Earlier this month, the International Monetary Fund updated its projections to -3.0 percent. (Don’t miss that negative sign.) By way of comparison, the global financial crisis of 2008–2009 resulted in GDP growth of -0.1 percent. This is massive.

How Are International Donors Responding to Education Needs during the COVID Pandemic?

But no region of the world is expected to escape this entirely. Despite its optimism, the World Bank is projecting Africa’s first recession in a quarter century. That economic slowdown translates to less government revenue. For Africa, the World Bank is projecting a drop in revenue of between 12 and 16 percent, depending on how the pandemic plays out. This is most severely felt by the oil exporters, who are facing the joint shock of falling oil prices and the pandemic.

During the 2008–09 global financial crisis, rich countries were able to protect education spending

If the proportion of government spending on education were to remain the same (between 3.7 and 4.7 percent of GDP in low- and middle-income countries), then back-of-the-envelope calculations that combine that ratio of past spending with revised growth projections yield a drop in total education spending of between 2 and 4 percent in middle-income countries, where the recession will hit harder. But if the historical experience of education spending during previous major economic contractions is predictive of what might happen to education budgets post-COVID, we are less optimistic.

LMICs seem especially vulnerable to external shocks due to their heavy reliance on external, volatile private sources of finance, more so even than some low-income countries (which tend to rely more on grants and concessional finance from donors). LMICs might face steeper declines in public revenues due to falls in demand for commodity exports; sharp falls in remittances; and swift, significant capital outflows as investors flee to safe havens.

In low-income countries, the global financial crisis did not hit with the same intensity, and education spending for our sample actually accelerated after 2008—though we would caution that the government expenditure data are notoriously noisy for this group of countries, and case studies suggest that several low-income countries did cut their budgets. 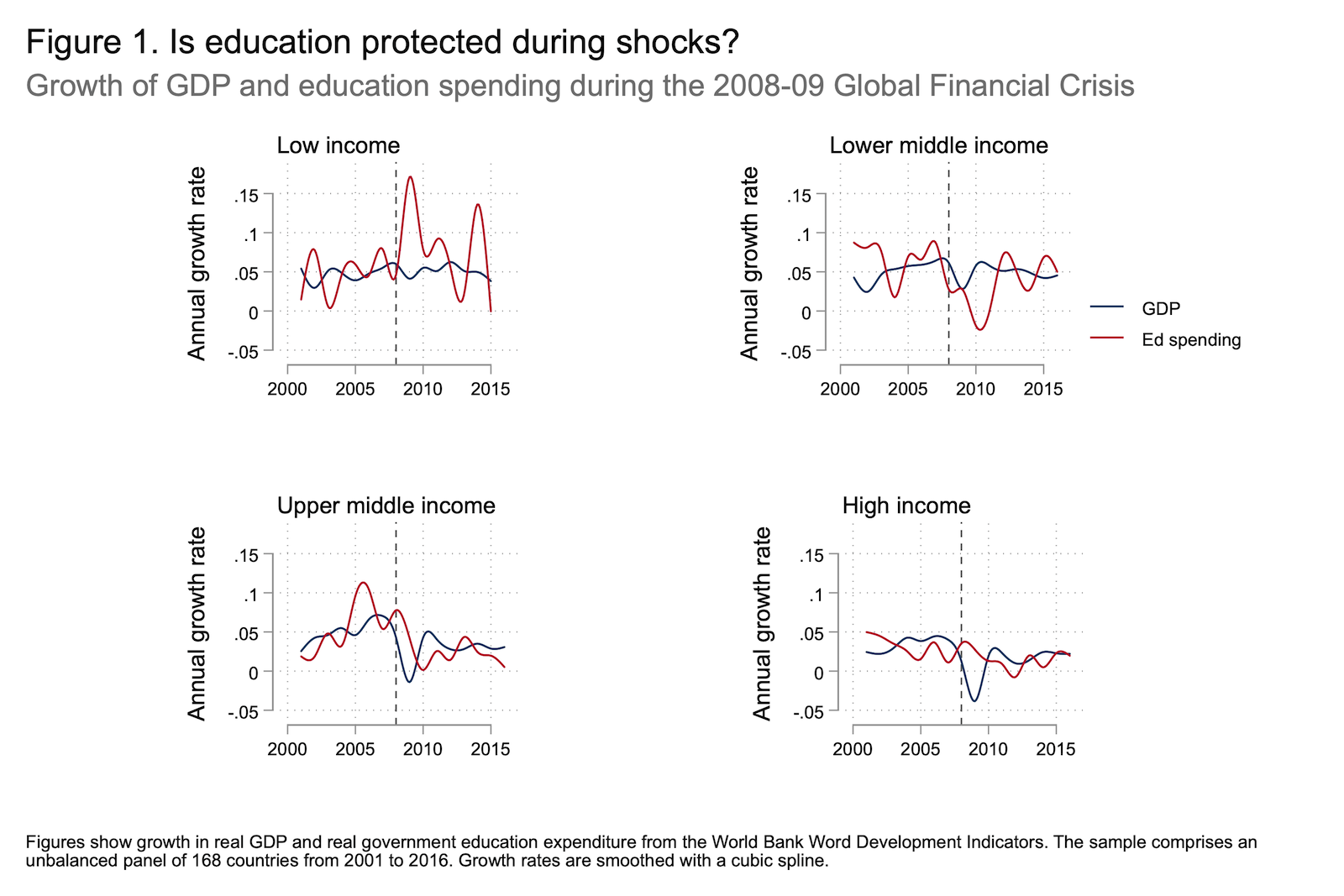 Economic growth has been a major driver of increased public spending on education, but how countries prioritise education as a share of the national budget also plays an important role

As population and school cohorts grow over time, education needs will grow significantly in many developing countries. The Education Commission calculated that to get all children in school and learning within a generation would require education spending to rise from 6 percent to 8.5 percent of GDP between 2015 and 2030, shared among governments, households, and external financing in the form of aid and loans. The group projected that domestic spending would need to rise as a share of GDP to 5.8 percent from its 2015 average of 4.0 percent through greater prioritization and improved resource mobilization (i.e., taxation), but this projection is much less feasible in the wake of a global health crisis, where it is very likely that education sector budgets are squeezed in favor of higher health spending.

The stagnation of education spending as a share of GDP is likely to be a significant financial barrier post-COVID and presents a very real risk that the SDG for education will fall even further off track.

Aid to education is not going to fill the gap

In the wake of the Ebola crisis of 2014–2015, donors stepped up to help fill the gaps in education. But unlike previous health crises, COVID-19 directly affects the economies not only of low-income countries, but countries all over the world. In fact, the biggest income losses are expected in the richest countries—i.e. the donor countries. The global financial crisis is therefore probably a better predictor of what is to come. Global aid to education more than doubled between 2002 and 2009. Since 2009, it has remained at roughly the same level while dropping as a share of total aid. With high-income countries around the world falling into recession, aid to education is likely to stagnate, if not fall further behind. The international financial institutions are boosting aid, but how much of that lands in the education sector and whether it fills the gap remains to be seen.

The Education Commission’s pre-COVID estimates showed that even under optimistic growth projections and scenarios in which developing country governments managed to significantly increase spending efficiency and invest the maximum possible from domestic resources, in line with top performers, they would still be unable to fully finance their education systems to meet the Sustainable Development Goals. In the wake of the global pandemic, lower future domestic revenue streams, the cost of the crisis and recovery, and squeezed education budgets will without doubt further exacerbate the finance gap.

Governments will have to make hard decisions and adjust their spending in the midst of the crisis. Faced with urgent short-term needs, it will be tempting to let education spending—a long-term investment in human capital—stagnate. Trade-offs between sectors and within the education sector will need to be made, and governments may have to choose between some of their most ambitious education initiatives—from offering free universal secondary education to expanding pre-school services.

Donors and governments can keep the value of education at the center of policy discussions so that essential investments in the education sector don’t fall by the wayside. The way to do this will vary by country but will likely include a combination of finding savings within domestic spending and by mobilizing additional international financing for education—or fighting the improbable battle of raising domestic tax collection in the midst of an economic downturn.