Companies that invest in mining projects around the world look to clear a hurdle rate of profitability, or a minimum estimated return on cash invested. In practice, that means that they usually discount future profits by their cost of capital plus any project- or country-specific risk premiums. The riskier the project or country, the higher the hurdle rate.

In mining projects, project and country risk are major drivers of corporate strategy. According to EY, a consultancy, the top metals and mining business risk in 2020 was securing a license to operate. BHP, the global mining giant, divested a number of assets in 2015 in order to focus on “high quality” projects located in “low-risk” locations.

In order to compensate investors for higher risk and provide a competitive environment for mining, countries have been expected to lower their royalty rates and tax bases. In response, developing countries like Guinea and Zambia have changed their mining fiscal regimes to enhance their attractiveness to investment. On top of changes to the tax system, countries are pressured to provide project-level incentives to mining companies, which can lower the effective tax rate for a given mining project. A recent report from the International Institute on Sustainable Development showed this was more prevalent in low-income countries like Niger and Madagascar.

With pressures to lower taxes and project-based incentives, and the possibility of kickbacks in exchange for favorable deals, lower-income countries seem like the kind of place where companies get away with paying a smaller share of mining profits to host governments. Yet our open-access paper in the October 2021 issue of World Development shows exactly the opposite: in countries with higher country risk, which tend to be lower-income countries, government “take”—or share of total project returns—is actually higher.

Making this calculation is hardly straightforward: ore deposits in such places might be superior, which could justify higher government take. Or they might be older, leading to smaller deductions. We combine data on government revenue from the resource sector that became available thanks to extractive industry transparency efforts, and collected by the Natural Resource Governance Institute, with project-level data on gold mines that includes geological and cost information about different mining projects. Just about any way the data are sliced, lower-income and higher-risk jurisdictions collect a higher take, even after geological variables and mine age are controlled for.

We reproduce a figure from the paper that depicts this relationship in its simplest format: government take rises from around 3 percent of pre-tax profits in high-income countries to nearly 13 percent in low-income countries. 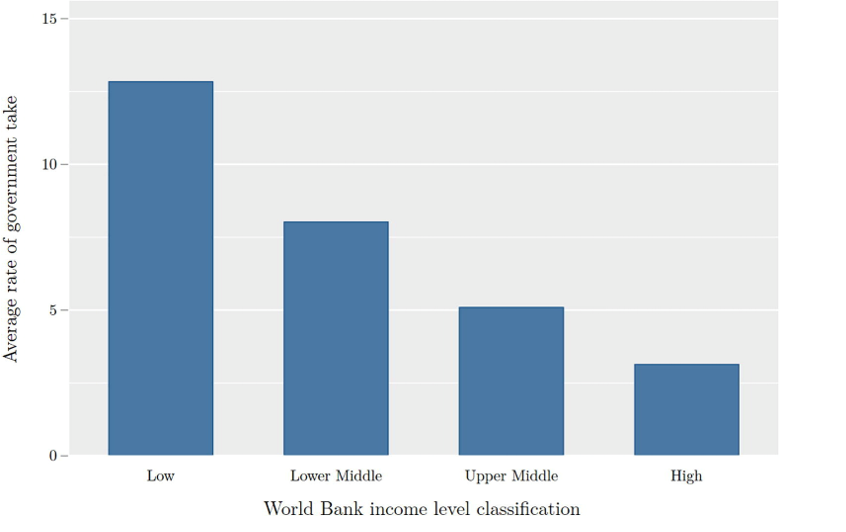 Note: Government take is averaged across mines and is expressed as a percentage of net revenues from mining operations.

So what explains this counterintuitive result? Based on a theoretical model, we predict that side payments (both licit and illicit) rather than official taxes might be the preferred channel to compensate politicians in some countries. This would be more likely in corrupt countries, where government officials could provide favorable concessions in exchange to informal kickbacks. A UN study, for example, estimates that African countries lose out some $40 billion annually in trade mispricing in the commodity sector. Surprisingly, we find no evidence that corruption or poor governance quality reduce the government take. If anything, they are positively associated with greater take.

Consistent with our predictions, however, we find that countries that are more dependent on natural resources have higher take, indicating greater ability and motivation by their governments to collect mining taxes.  Also, domestic companies face much lower take rates, suggesting that rents may be shared domestically through means other than taxation in less risky countries. This also implies that rich countries that rely on domestic companies for extraction could be losing from dolling out excessively favorable concessions.

All in all, our puzzling results call for further research for confirmation and elaboration.

If lower-income countries that otherwise are known for higher political risk are indeed simply better at collecting their fair share of mining rents as taxes, this wouldn’t be the first time that governments accused of suffering from low capacity manage quite the opposite. In post-war Liberia, for example, price controls prevented key goods from being more expensive, protecting consumers from monopolistic pricing. More broadly, “pockets of effectiveness” in the public sector seem to prevail across many governments otherwise labelled as low capacity.

Our paper is the first, to the best of our knowledge, to systematically test for the determinants of government take using novel, project-level data on government payments. Even as the primacy of hydrocarbons declines with the onset of energy transition, the importance of metals and minerals is expected to increase. If our finding that government take is consistently higher in lower-income countries holds up to new data and analyses, policymakers in places like Canada and Australia—who face demand from Indigenous populations for a higher share of resource revenues—may wish to pay closer attention to how these countries succeed in getting a fairer share of mineral rents.

We estimate that the short to medium-term fiscal impact of previous pandemics has been significant in 170 countries (including low-income countries) during the 2000-2018 period.