by
Mead Over
June 21, 2010
A new research study by Hoare et al in PLoS (ungated) projects that, within ten years after countries attain universal access to antiretroviral treatment for AIDS, one fifth of all patients starting treatment will never have a chance to benefit from the least-expensive and least-toxic treatments, because their initial infection will be a drug resistant strain of HIV. We all know that drugs can get “worn out” from overuse. In rich countries, some of us remember when penicillin used to reliably treat many diseases, but now many disease agents are resistant to it. How, why and when do drugs stop working? CGD’s new report, The Race Against Drug Resistance, drives home the limited lifespan of all drugs and urges global action to contain this growing threat. A graphic in the report’s Annex depicts the lifespan of many different drugs in several important classes arrayed on a historical timeline. Among antibiotics, penicillin started failing after about ten years of use. 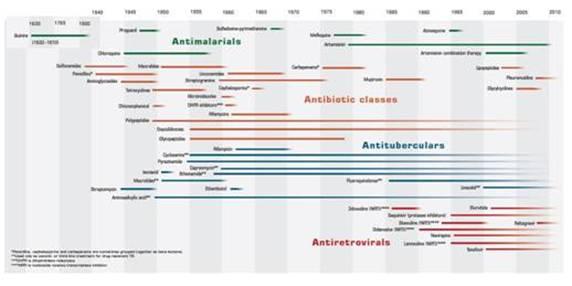 Source: Annex B of "The Race Against Drug Resistance".  For larger image click here. Antiretrovirals, at the bottom right of this figure, are not immune to drug resistance.  In fact, because the AIDS retrovirus, HIV, replicates literally billions of times each day inside the body of a single patient, the chances of a resistant strain of HIV appearing are higher than they would be for a microbe that replicates more slowly.  Note in the figure that several antiretrovirals have had extremely short lifespans. Increased access to any given drug also means an increase in the risk that the drug will be worn out –because the more exposure a pathogen has to a drug, the more chances that pathogen has of “discovering” how to evade it.  This tradeoff between how long a drug lasts and how many people it reaches each year can be displayed as a tradeoff frontier like the left-most panel here:

Of course, as the CGD working group’s report explains in fascinating detail, this tradeoff is not immune to policy. The report details a range of policy options available to individual countries, pharmaceutical manufacturers, and the broader public health community. Collective, global action can shift the tradeoff frontier to the northeast – so that we can have more years of drug efficacy for any given level of access. The PLoS article provides useful insights into some of the parameters affecting the speed with which antiretrovirals will become worn out and scarily suggests that much ART resistance may remain hidden for some time, meaning that measured resistance may be underestimated. But, because the article assumes universal access to ARVs, it sheds no light on the tradeoff between access and the duration of drug efficacy. Because universal free access to ART is unlikely in the most severely affected countries, the question then arises whether some of the policies recommended in the new working group report can help minimize the development and spread of drug-resistant HIV variants in situations where free public access is less than universal. As laid out in logical sequence on pages 24 – 30, the unfettered operation of existing market-driven supply and consumption of drugs like ARVs actually hastens drug obsolescence. Unfortunately, if left to their own devices, physicians and patients may insufficiently encourage adherence to ARV regimes, a practice that speeds the development of drug resistance within an individual patient and can lead to the spread of that resistant strain to others. In a 2004 study of the benefits and costs of ART in India, my coauthors and I recognized this issue by defining “structured” ART as having the following seven features: At that time in India, when free public provision of ART had just begun, most AIDS patients in the country sought ART in the private sector and the limited evidence available suggested that most of it – and indeed most ART available at that time in the public sector – was “unstructured.” One solution to this problem is regulation of the private sector in an attempt to assure that private sector ART is “structured.” Another approach, adopted by the AMFm initiative (see Box 4.6 on page 44 of the report) is to subsidize the price of a drug-efficacy extending technology in order to crowd out the free market’s drug-corroding influence. My coauthors and I incorporated assumptions of the magnitude of this crowding-out effect in order to arrive at advantageous estimates of the cost-effectiveness of the AMFm initiative for malaria and of ART in India. Through a subsidy—either of a more durable drug (as in the case of the AMFm) or of an adherence maximizing form of treatment (“structured” ART as we recommended in India )—the tradeoff between access and drug durability will become less acute, as in the second panel of the figure above, thus benefiting both current and future patients and reducing the potential future fiscal burden of more expensive newer medications.

Putting Market Structure for Antimicrobials Out to PASTEUR?
Anthony McDonnell
and
Morgan Pincombe
May 09, 2022

Drug-Resistant Infections Are One of the World’s Biggest Killers, Especially for Children in Poorer Countries
Anthony McDonnell
and
Katherine Klemperer
January 20, 2022