This year, five years after the Paris Agreement, countries will come together and look ahead to reducing their carbon emissions. While the focus on curbing future emissions is essential if the world is to avoid the worse impacts of climate change, the responsibility of countries for climate damage to date is also relevant to setting their future commitments equitably, including on finance. So, how should we value those historic emissions and how does this compare to promised levels of climate finance?

This note looks at cumulative historical emissions but adds two adjustments to quantify countries’ liability for climate damage. First, we use recent thinking on carbon prices to cost emissions. Second, we allow that cost to fall for historic emissions and include a cut-off to reflect the rising certainty of climate damage. The assumptions necessary for this are difficult and contested so, we welcome feedback on ours. Even so, in the arguably conservative estimates we present here, the total liability for historic emissions could reasonably be $26 trillion, around 31 percent of global GNI. For just the OECD countries, paying this off would cost around $150 billion per year to 2100.

It is the cumulative total of emissions that is problematic for the climate, so who is responsible for that stock? Our World in Data uses Carbon Dioxide Information Analysis Centre (CDIAC) and Global Carbon Project estimates to calculate carbon emissions stretching back to 1751, when carbon emissions were tiny relative to today’s volumes. It was only in the 20th century when emissions began to increase steeply, and it took until around 1991 for them to reach half of today’s total accumulated emissions. (Ideally, in valuing a country’s liability for climate damage, we’d have data on all greenhouse gas emissions, not just carbon dioxide. But there’s little data beyond carbon before 1990, and even now carbon accounts for around three-quarters of annual emissions.)

Understandably, it is the more populous countries that have emitted most, but a country’s emissions profile over time and its share of accumulated global emissions also depend on whether and how recently it industrialized. A breakdown highlighting selected countries is shown below.

The timing of emissions matters

The timing of these emissions also matters, for two reasons. First, climate impacts rise exponentially with emissions and global mean temperature increase. According to the Intergovernmental Panel on Climate Change (IPCC), “overshooting” 1.5°C would lead to more significant risks of passing through “tipping points,” defined as thresholds beyond which certain impacts can no longer be avoided even if temperatures are reduced later.

Second, countries have become increasingly aware of the damage from emissions. This evolving awareness is reflected not only in the adoption of international agreements like the Paris Agreement and the creation of the IPCC, but also in the frequency with which they are mentioned by leaders (we plan to look systematically at this). It’s more difficult for countries to be responsible for damage before they understood the harm of pollution but as countries and the world demonstrated they understood that emissions are harmful, their responsibility for the damage is clearer.

The cost of carbon

There are several ways to think about the cost we should place on carbon. For economists, perhaps the most important is the concept of “externality”—the cost of the pollution that spills over onto someone else (outside of the market or transaction). This idea also motivates the concept of a “shadow price” of carbon, which puts a per-unit value on that externality.

The High-Level Commission on Carbon Prices, chaired by Lord Nicholas Stern and Nobel-laureate Joseph Stiglitz, recently produced an authoritative estimate of the “explicit carbon-price level consistent with achieving the Paris temperature target.” The Commission concluded that each tonne of carbon should incorporate an additional cost of US$40–80/tCO2 by 2020 and US$50–100/tCO2 by 2030. Strictly, this could differ from the true externality of carbon, but the damage caused depends on when emissions peak—so, it’s necessary to tie any estimate to a scenario, and the global consensus reflected in Paris seems appropriate.

It’s also worth noting that there are other types of prices associated with carbon. The externality is distinct from the costs related to reducing or removing carbon – for example the mitigation cost in different projects (often known as marginal abatement costs) which can be negative (i.e., mitigation saves money) but very high in some projects. Finally, there are a number of related metrics—in our Commitment to Development Index, we measure policies like a country’s per tonne fossil fuel subsidy and the level of carbon pricing.

For our purposes, we want to understand the cost of the damage likely to be caused by emissions to date, and which countries are responsible for that damage. As a starting point, we take the lower-end estimates of carbon costs in 2030 of $50/tCO2 from the High-level Commission report and discount those historically by 2 percent per year. This is consistent with the Commissions figure of $40 for 2020, and also reflects other suggestions in the literature (e.g. IMF, 2019; Climate Leadership Council, 2019). This places a higher cost on more emissions which, as above on their timing, reflects that they will be more damaging due to the exponential increase in damage with increasing emissions, and because there is greater certainty over the impacts.

We also consider a cut-off point—that is, we set the price of carbon to zero before a certain date—reflecting societal awareness of emissions’ polluting impact. Whilst this awareness clearly emerged earlier in the 20th century, we have chosen 1989 to coincide with the creation of the Intergovernmental Panel on Climate Change. This ignores 48 percent of global emissions. Again, we recognise that this produces a conservative estimate (see table 2 below for an alternative), and also reduces both the absolute responsibility of early industrialisers like the UK, Germany, and the US and their relative share of the current global liability.

Finally, we attribute the liability to the country “producer” of the carbon rather than the end consumer who may import it. This aligns with the approach taken by the UN and the Paris Agreement, and with the principle that the producer is the agent in control and responsible—but it does ignore that some of these emissions are generated responding to demand which tends to be in higher-income countries.

This produces a damage cost schedule like the one shown in figure 2. 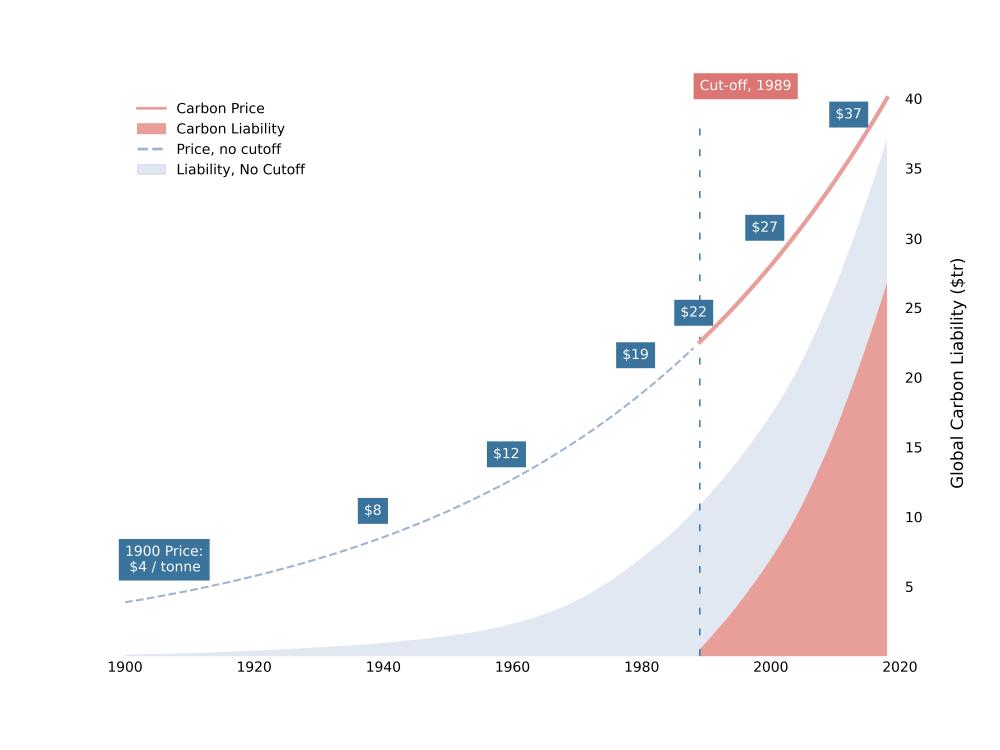 If we apply this to actual emissions, it provides the results in table 1. 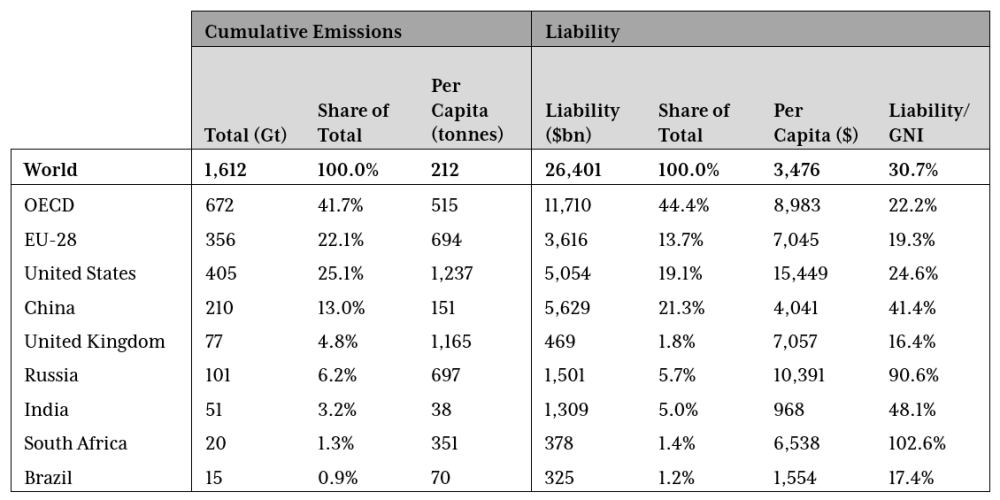 OECD and China’s liabilities in context

At the global level, a figure like $26 trillion sounds enormous, but this is a liability built up over a generation of emissions. Relative to total global debt of perhaps $275 trillion, it’s an increment under 10 percent. The OECD carbon liability of almost $12 trillion is roughly a quarter of its $49 trillion private pension assets. As we note above, relative to the (flow) of global GDP, it’s under a third. The per head costs of climate damage to date (some $15 thousand in the US) are also significant, but manageable—conceptually this would be the per head payment to clear the entire debt of emissions since 1990.

These figures are also relevant for thinking about compensation from polluters. Returning to the concept of the carbon price, this is the value of pollution that wasn’t paid for by the initial activity (and in our scenario, after countries fully understood they were polluting)—so the polluter is responsible. Countries could seek to compensate for this damage over time. So, spread over the 80 years to 2100, the OECD’s liability would equate to $146 billion per year (part of that is owed to itself). This provides an interesting reference point for the commitment for “developed countries” to mobilize (though not provide) $100 billion of climate finance per year through 2025, with the Paris Agreement endorsing that, and promising a new goal after 2025 “from a floor of USD 100 billion per year, taking into account the needs and priorities of developing countries.”

Another implication is that whilst OECD countries contributed over 40 percent of the liability, under these assumptions, China also contributed over 20 percent. So, China—along with India and Russia, who each contributed 5 percent—should also be contributing to any successor climate finance commitments.

These results may seem a long way from the reality of climate negotiations. Still, they provide a starting point for discussions. If China, the US, or the UK don’t think this is a fair assessment of liability, is that because they disagree about the cost of carbon and how it changes, or about when countries should take responsibility?

Of course, this is just one scenario. If we consider a lower or higher cost of carbon, the results change proportionately and the cut-off makes a difference to which countries are responsible—for example, without the 1989 cut-off (also shown in the above chart and table 2 below), the OECD’s contribution rises $5 trillion to $16.5 trillion and 45 percent of the total liability. 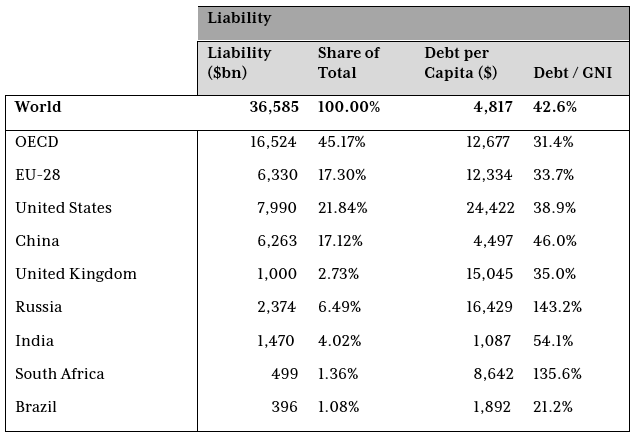 Implications for climate finance and next steps

One element of the climate negotiations relates to financing from “developed” to “developing” countries. Our estimates are broader in the sense that they relate to the damage caused globally, not just to developing countries. Still, we think that valuing the climate damage done to date is relevant, and this is a first cut of those calculations.

We welcome feedback both on the scenario we’ve chosen, on others of value, and on whether it would be useful to publish a model in which users could specify the assumptions. For the two scenarios we discuss, you can see our calculations here.

Annex. Table 1 and 2 repeated for comparison