COVID-19 and Budgetary Space for Health in Developing Economies

The sizeable economic and health consequences of COVID-19 are clear as the pandemic spreads, translating into additional burden on health systems not just now but for years to come. But given cratering revenues and the long shadow of COVID-19 on discretionary public expenditure, what will be the budgetary space for spend on healthcare? In this note we outline the potential shortfalls in domestic health spending in developing economies over the coming years, discuss potential options, and offer one immediate action: the need to protect and expand essential spend on health during crisis and beyond.

The International Monetary Fund and the World Bank now project 3 percent and 2.5 percent reductions in GDP in 2020 in developing economies, respectively. However uncertain or even optimistic these projections may be given the persistence of the COVID-19 pandemic and its effects, there is no question that growth prospects are currently worsening—this worsening translates, for example, into an estimated 30 million more people in extreme poverty by 2021 compared to the April 2020 GDP projections, and 100 million more compared to the pre-COVID trajectory. The corresponding impact on health budgets is likely to be significant because economic growth has historically been the main determinant of real increases in health spending, on average across a large pool of countries.

This projected slowdown in real health budget growth comes at a time when more resources for health are acutely needed to sustain the pace of progress towards universal health coverage (UHC). Despite general upward trends in real health budgets over the past decade, there is still underinvestment in health relative to UHC requirements. Recent estimates informed by pre-COVID-19 calculations suggest that per capita health expenditure would have to quadruple in low-income countries and double in middle-income countries by 2030 for an essential UHC package of services to be affordable. In other words, governments need more money (per Table 1) just to maintain their present policy trajectory.

In addition, more resources are needed to fight on two other fronts: the immediate response to COVID-19 (e.g., the World Bank estimated additional financing to the tune of 1.5 percent to 3 percent of GDP for sub-Saharan Africa to fight COVID-19) and the likely increased demand due to the indirect effects of COVID-19 (e.g., the effects of the worsening economy on health and nutrition) and response policies (e.g., deferred treatments during lockdown). Consequently, budgetary space for health in developing economies is under considerable pressure and likely to remain so over the next years, both in terms of the volume of available financing resources and in terms of the capacity of public finance management systems to deliver these resources to the frontlines.

Even in the immediate response to the crisis, the fiscal response is not being mainly directed to the health system, which is perhaps surprising given that COVID-19 is first and foremost a health crisis. According to IMF’s near real-time fiscal response tracker, countries are spending a bit more in health (0.2 percent of additional GDP in low-income countries, 0.3 percent additional GDP in emerging markets/middle-income countries), but not much more. It might be the case that the increase doesn’t even cover the additional resources required to fight the pandemic, pushing the health system towards out-of-pocket payments at a time when the opposite is needed. The small increase in health spending is also nothing close to the increased spend on the rest-of-government expenditure—principally social protection and firm bailout (Figure 1). The priority placed on health seems small compared to the scale of the need and the close relationship between controlling the pandemic and having the economy operate.

Figure 1. Fiscal response to COVID-19 in emerging and developing economies 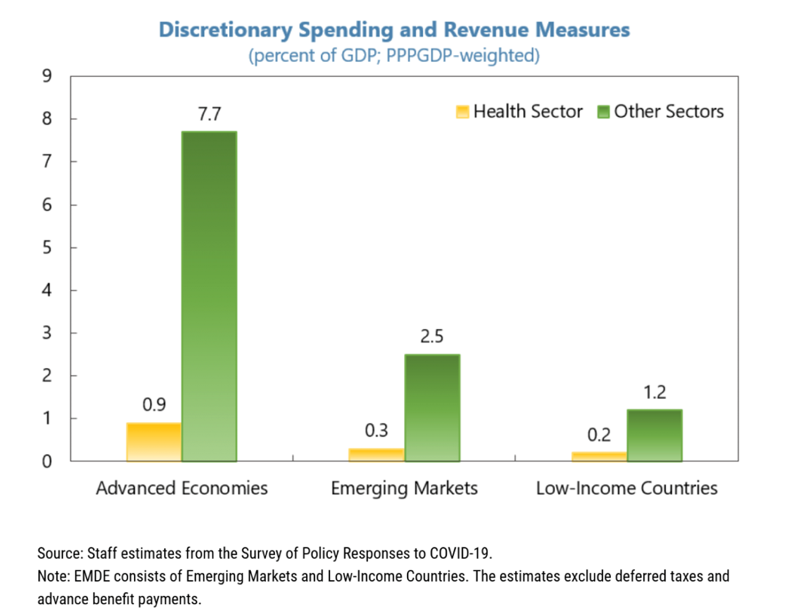 And there may even be expenditure cuts; a recent report by the Guardian described plans to reduce federal spending on primary health care in Nigeria by 40 percent in next year’s budget.

The question is what will happen in the medium run. If the past is any guide, there is some hope that health spending levels will be sustained. During and for many years following the 2008–09 global financing crisis, education budgets contracted. However, health budgets did not: their growth slowed and closely followed the trajectory of real GDP, but remained, on average, positive and superior to real GDP growth. Moreover, health was not (further) de-prioritized—on the contrary, allocations relative to GDP increased in low- and lower-middle-income countries (Figure 2).

More broadly, there is little indication that domestic government health expenditure (GGHE-D) as a share of GDP goes down for up to two years following a GDP contraction (Figure 3). Similarly, public spending on health in Sierra Leone, Guinea, and Liberia actually increased after the Ebola outbreak, the most recent international public health crisis before COVID-19 (Figure 4). 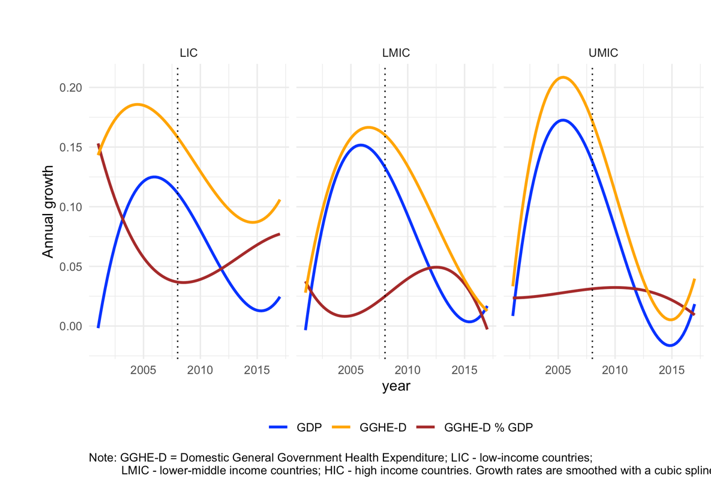 Figure 3. Trends in GGHE-D as a share of GDP before and after years of GDP contraction 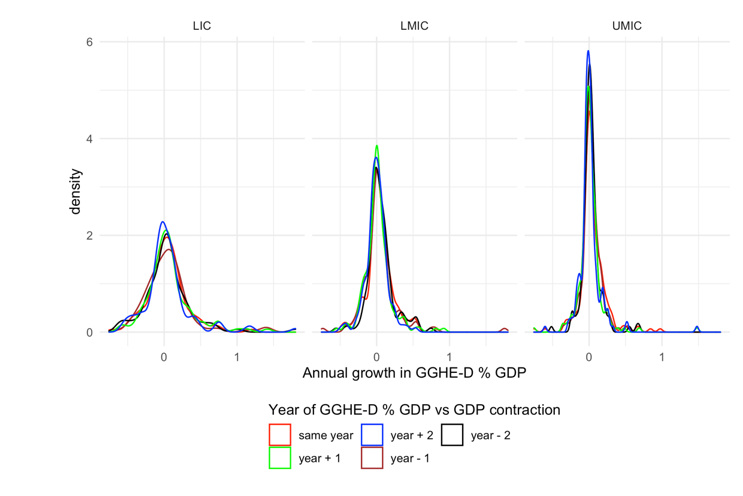 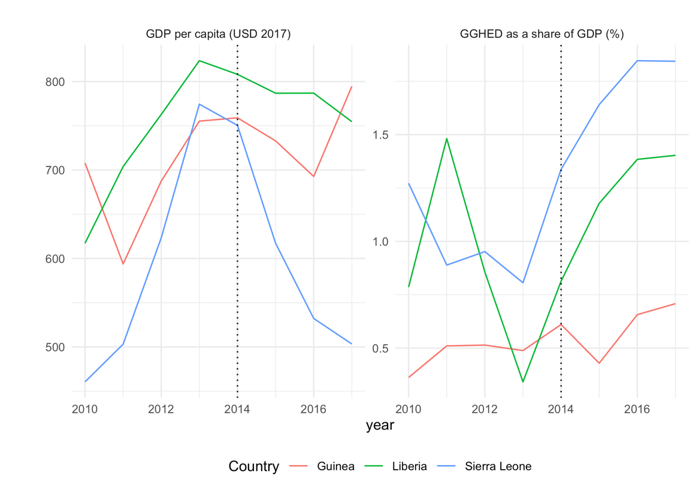 Health aid, currently in the region of US$26 billion annually, has been growing in real terms over recent years but there are few reasons to be optimistic about medium-term trends. Aid agencies are spending significant resources supporting efforts to contain and mitigate COVID-19, and are already seeking more individually (e.g., the Global Fund) and collectively. For example, the Access to COVID-19 Tools Accelerator is seeking an additional US$31 billion (more than the entire current health aid spend for a year) for the next 18 months. This means there may be less money for the rest of these aid agencies’ crucial work.

At the same time, high-income countries themselves are suffering significant economic shock, fiscal deficits, and unprecedented levels of debt, which may well slow down development assistance as it did after the global financial crisis—and the downturn and its likely impact are greater this time. For countries that spend a set percentage of their gross national income on official development assistance (ODA), a projected fall in GDP will have an impact even if the actual target for ODA spending does not change. In the UK, for example, which has a 0.7 percent target, the fall in UK GDP of 14 percent this year will have an impact even if the 0.7 percent target and means of spending remain intact—with aid cuts already announced. The economic hardship caused by this pandemic may lead to a greater number of countries seeking support from what may end up being a smaller pot.

A further complication is that most multilateral organisations have rules whereby countries start to lose funding once their wealth goes above a certain level. This may no longer happen, which will impact already-drawn plans for transition. For example, the Global Fund’s 2020–2023 strategy and 2019 replenishment heavily rely on an extra US$48 billion raised as co-financing from countries, which may now be out of reach. Although low-income countries relied most on aid to sustain their populations' health (with about 80 percent of all preventive care financed externally), there was already an expectation they would need assistance for longer. Many more lower-middle-income countries, however, were due to “graduate,” and their aid prospects are the most uncertain at the moment.

Last but not least, it is likely that health security—currently representing less than 1 percent of aid—will gain further prominence, possibly at the expense of other health areas in order to prevent future outbreaks, particularly given that few national governments have put meaningful domestic resources in health security to date, or have done so in cycles of “panic and neglect.” It remains to be seen what will happen to non-communicable diseases, for example, which make up less than 2 percent of current aid but would represent around 40 percent of the costs of an essential UHC package in developing countries. Furthermore, the possible fragmentation of the global health architecture occasioned by the United States’ announced withdrawal from the WHO may have a “pull effect” on other global health budgets.

Prioritization and efficiency gains, the only options within governments’ control

The unprecedented and sudden budgetary pressures brought by COVID-19 in developing economies land on a terrain of health underspending relative to the UHC vision and generally weak public finance management systems. Rising to the double challenge of fighting COVID-19 and staying on course for UHC will require finding rapid solutions to both spending more and spending better while making full use of the suite of available responses.

More broadly, governments may mitigate some of the uncertainty by conducting and routinely updating budgetary space for health assessments. These assessments should be embedded in policy and budget processes rather than treated as one-off exercises; based on realistic—not aspirational or hypothetical—scenarios; and build on the available knowledge base. Better data are required for any such assessment to be meaningful, particularly for aid, where important gaps in the transparency of COVID-19-related funding remain, and for efficiency, where using recent knowledge resources would fill previous gaps in the selection and use of efficiency indicators. Investment cases for health priorities should also reflect these real-world constraints to obtain the most health for the money invested.

Donors, governments, and researchers need to come together—possibly under the umbrella of a global budgetary space for health monitor inspired by existing global health initiatives, as with priority-setting and procurement—to facilitate the embedding of routine budgetary space analyses in policy decisions and medium-term expenditure planning.

See here for the appendix. 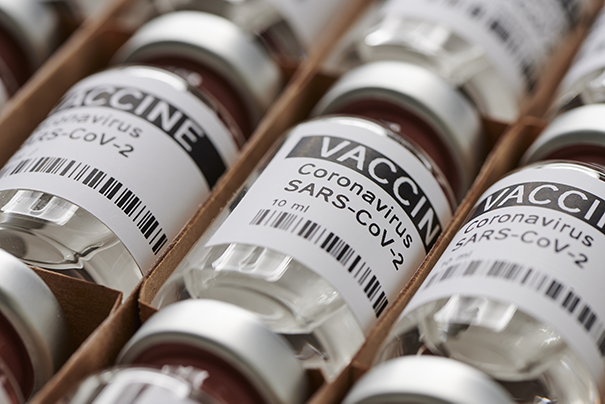