We Don’t Want Kinky Energy Either

Lant Pritchett is again attacking “kinky development” for skewing goals toward minimal provision for the poor rather than broader economic development. Lant’s rant is that defining the poverty line at $1 per day is “egregiously paternalistic” if true poverty is really closer to $10 or maybe $15 per day. He worries about the wrong goal leading to all kinds of misplaced resources.

Lant’s critique resonates in the energy field, too. Energy wonks will gather in New York City on April 3 for the third annual Sustainable Energy for All (SE4All) forum to discuss progress on SDG7, whose aim is “By 2030, [to] ensure universal access to affordable, reliable and modern energy services.” The target is wonderful. The details are where this gets a little kinky.

One of the principal SE4All trackers is a tool developed and managed at the World Bank, the multi-tier framework (MTF) for measuring access to household electricity supply. The next round of the MTF will be launched at the forum.

We’ll start with the positive, which is right there in the MTF’s title: it’s multi-tier. This is much better than a binary 0-1 of energy access, such as counting physical connections or the current IEA standard which defines “modern energy access” as an estimate of the percentage of people with annual consumption above 100 kWh/person for urbanites and 50kWh for rural citizens. The MTF is also tracking attributes of energy delivery such as reliability and affordability. Most importantly, the MTF is a vast improvement because the tiers imply moving up an energy ladder. The MTF suggests that getting a lightbulb is not a simple goal itself, but rather one step up toward higher energy services.

The Multi-Tier Matrix for Measuring Access to Household Electricity Supply 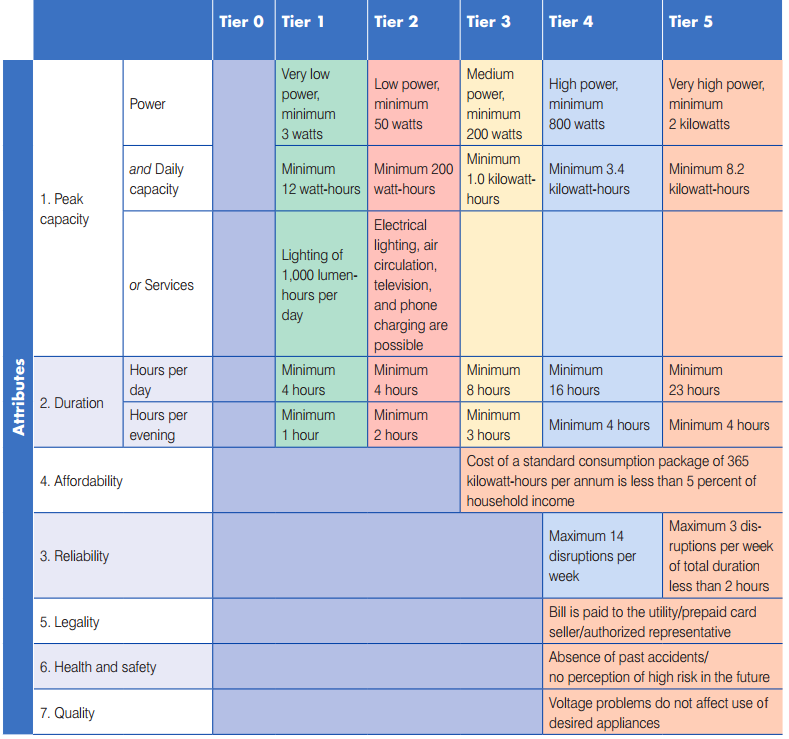 Despite these improvements, there are (at least) three big shortcomings of the MTF for household electricity.

Does any of this really matter? Absolutely. Goals influence decisions. If the aim is just to get everyone to 73 kWh per year and declare success, then there’s no problem providing low power home kits to poor people and forget about building a modern energy system to meet future needs. If the goal is just to get households to use a few basic appliances, then there’s no reason to worry about building modern energy systems for industry and commerce. If we only focus on giving a little bit of energy to poor people, then we don’t need to worry about future energy demand or job creation. But none of this seems aligned with the historical record of how energy was accessed in the rest of the world: people moved to cities and towns and power was deployed principally to generate economic activity.

The SE4All Forum will undoubtedly put needed attention on accelerating the path to eliminating energy poverty. And the yeoman’s work of the World Bank’s ESMAP team has inarguably strengthened our toolkit for measuring progress toward that goal. But we should not let a wonky analytical tool mask the role of energy in the development process by setting the bar too low—and too kinky.