The Worker Crisis in Southern and Eastern Europe: Too Many Leaving, Not Enough Coming

This is the fourth in a series of blogs looking at regional aspects of future global demographic and migration patterns discussed in my paper Global Mobility: Confronting A World Workforce Imbalance. You can read other blogs in the series here.

The tragic images of drowned young bodies on Greek island beaches are evidence of a sickening irony: the challenge confronting Europe’s Mediterranean countries is that they face a ballooning shortage of young people, yet their governments would apparently rather let young migrants die than let them in. That is a problem across much of Southern and Eastern Europe: opposition to immigration in countries where aging local populations are likely to make people from other places increasingly important to sustain living standards.

Many countries in the region face three interlinked problems: people aren’t having kids, the kids they do have are leaving, and the remaining population is rapidly aging into retirement. Start with the babies: compared to a “replacement” fertility rate of 2.1 births per woman, the fertility rate is 1.2 births per woman in Spain, the same in Ukraine, 1.3 births in Italy, below 1.5 in Greece and Portugal, and only just above 1.5 in Russia.

Few new workers and aging old workers combine to shrink workforces: under the UN medium forecast, Portugal, Italy, Greece, and Spain will all see their working age populations decline by more than 25 percent (in Figure 1, the gray bars depict the percentage change forecast for the population aged 20-64 between 2020 and 2050). And they will all see more than seven people over the age of 65 for every ten people aged 20-64 by the year 2050 (in Figure 2, the teal bars show the change in predicted old-age dependency ratios 2020-2050). The four countries are all in the top six globally on this measure, behind only South Korea and Japan. Add in those under 20 to the dependency numbers and all four countries will see more dependents than working age people in 2050. 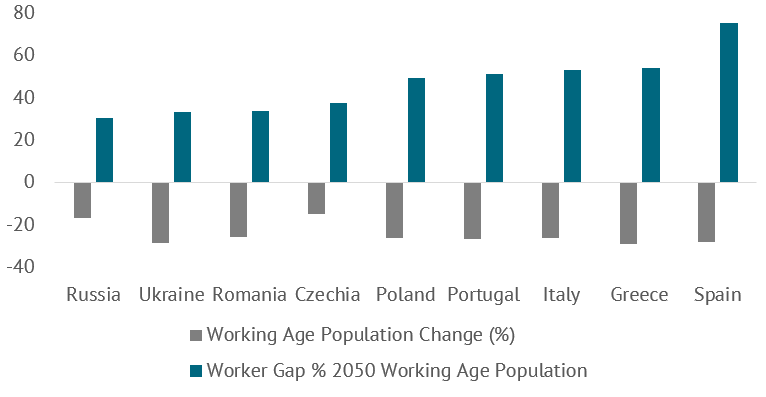 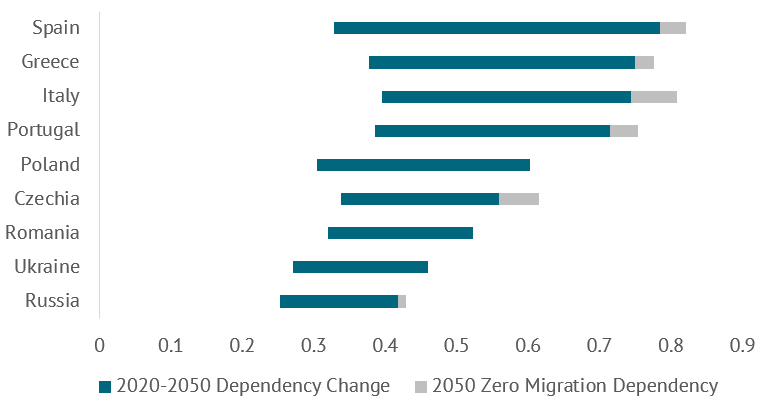 The story across parts of central and Eastern Europe is similar, if not quite so dire: Poland, Romania, and the Ukraine will also see working age populations fall by 25 percent or more between 2020 and 2050. They will also see rising old-age dependency ratios, to 60 percent in the case of Poland, 52 percent in Romania, and 46 percent in Ukraine. Given UN forecasts for dependents (under 20 as well as over 64), Spain would need 76 percent more working age people than it is predicted to have in 2050 to keep dependency ratios unchanged from 2020. This “worker gap” is 50 percent or above in Poland, Portugal, Italy, and Greece, and between 30 and 40 percent in Russia, Ukraine, Romania, and Czechia (the teal bars in the first figure depict the scale of the worker gap).

Meanwhile, emigration rates from Greece tripled between 2009 and 2012, with about half the migrant flow returning immigrants and the other half Greek citizens—primarily younger, highly educated workers. Italy and Spain experienced similar growth in outflows that have remained elevated more than a decade after the financial crisis. Some Eastern members of the European Union have also experienced rising emigration. Poland saw emigration rates of about 20,000 a year in the period 2003-2005; that climbed to above 200,000 a year for much of the past decade.

This emigration primarily involves young people seeking opportunity often in the face of few good jobs at home (In Greece and Spain unemployment rates remain over 15 percent), And countries in the region will benefit from their emigrant populations through trade, investment and remittance links. But to ensure there are the firms and workers to benefit from those links and support a growing population of retirees, the countries of Southern and Eastern Europe will need more immigrants as well. That’s because the mass exodus of the young and educated isn’t so much about a simple lack of jobs at home as a mismatch between the jobs young educated people have reason to expect and the jobs that are available. More temporary and permanent migration is at best a partial fix to those problems, but can fill both skills gaps and jobs that young native-born don’t want to take.

Sadly, in contrast to much of Northern and Western Europe, the UN predicts net migration will play little to no role in reducing dependency ratios in Southern and Eastern Europe under business as usual. (The gray bars in the second figure depict how much larger the 2050 dependency ratio is under the UN zero migration forecast.) The largest impact on old-age dependency ratios is a 7-percentage-point reduction from zero-migration to business as usual predicted in Italy. The figures range from zero to 4 percentage points in Portugal, Spain Greece, Russia, and Ukraine. Poland and Romania are predicted to see a net negative impact of migration on 2050 dependency ratios because of the age structure and number of people leaving and arriving.

As George Yang and I noted in an earlier paper, the European countries that border the Mediterranean have a particular opportunity presented by their proximity to the continent still in the dividend stage of the demographic transition. Thanks to a working age population that will climb by 698 million and a falling dependency ratio, Africa as a whole will see a “negative worker gap” of 316 million people in 2050. The region will struggle to create good jobs for nearly that number of people, and would significantly benefit from the remittance and FDI flows along with trading opportunities that accompany larger emigrant populations. But current policies north of the Mediterranean squander that dual opportunity, with deadly consequences for many of the potential migrants involved.

Southern and Eastern European countries are home to significant anti-immigrant sentiment. 2019 Pew polling suggests that only 10 percent of people in Greece believe “immigrants today make our country stronger.” That proportion is 12 percent in Italy, 18 percent in Russia, and 21 percent in Poland (Spain is an outlier, with 56 percent seeing immigrants as a positive force).

The better news is that young people everywhere are more pro-migration, perhaps in part due to a recognition that they will face the consequences if it does not occur. And governments in the region are also displaying some recognition of the growing problem they face: despite the Hungarian government’s harsh words about migration, the country has recently opened up to more temporary workers from outside the EU to respond to a chronic labor shortage in manufacturing, IT, and construction, a problem shared by other countries in the region. Since before the pandemic, Russia has been losing foreign guest workers to countries in the EU as well as Turkey and Iran, emphasizing the increased competition for migrant workers in upper-middle-income countries. COVID-19 and responses saw half of those remaining leave. Poland, meanwhile, has been encouraging migration from Ukraine. But especially in times of higher unemployment and in the face of popular opposition, governments need to make sure migration not only benefits all but is seen to benefit all.

This could involve greater use of temporary migration schemes but also an active engagement with potential sending countries encompassing language skills, training, worker rights and conditions as well as efforts to integrate migrants into communities they settle in (something that will take work: over the past 10 years, migrants to the Commonwealth of Independent States countries report some of the highest levels of dissatisfaction and the desire to move home of migrants to any major immigration destination). And worker mobility policies should also support any domestic workers who fear competition or displacement with training, social services, and safety net systems. Given the considerable net positive economic impact of migration, it is both possible and a priority to ensure migrants, sending countries, and receiving communities all benefit from the process.