Northern Europe and Worker Mobility: Aging in Place with the Help of the Neighbors

This is the second of a series of blogs looking at regional aspects of future global demographic and migration patterns discussed in my paper Global Mobility: Confronting A World Workforce Imbalance. The first blog in the series focused on East Asia.

Large parts of Northern Europe are about to witness a phenomenon most haven’t seen for 200 years or more: a long-term decline in working age populations. Perhaps one result will be a reversal in the trend toward returns to capital outpacing growth in wages, but (as George Yang and I discuss in a recent paper) the scale of the coming shortfall in working age people as populations age will likely have other less attractive consequences for overall economic growth and the challenges of financing old-age safety nets and health care.

In common with the rest of the planet, Northern Europe is seeing declining fertility alongside aging. But because the process is more advanced in high-income economies, much of the region has already reached the stage where this translates into stagnating or falling working age populations. In Figure 1, the gray bars depict the percentage change in the population aged 20-64 between 2020 and 2050 as forecast by the UN. In Germany, the (absolute) number of working age people will fall by 17 percent. Even in countries where the number of working age people will rise, that age bracket will expand far more slowly than the population over 65. That will increase old-age dependency ratios. In Figure 2, the teal bars show the change in predicted old-age dependency ratios between 2020 and 2050. In France there were 37 people over the age of 64 for each 100 people aged between 20 and 64 in 2020. By 2050 that will rise to 54 percent. In Austria, the ratio will be 56 percent by 2020. 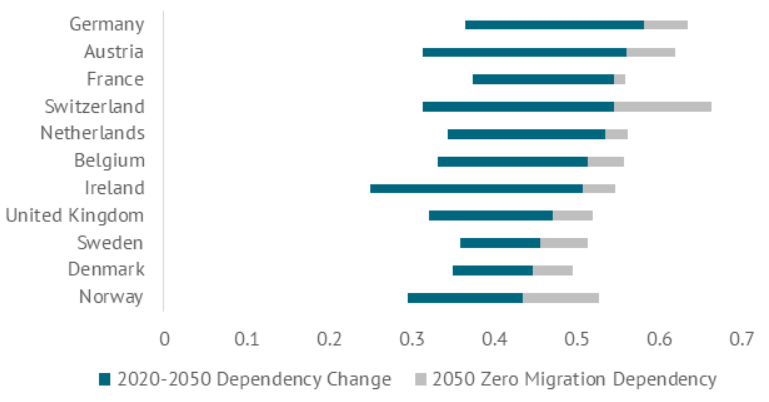 Given forecast increases in all-age dependents (those under 20 and over 64), countries in Northern Europe would need far more than their predicted number of working age people in 2050 to keep dependency ratios in that year at the same as their 2020 level. The teal bars in Figure 1 depict the scale of the “worker gap”—the percentage above forecast 2050 working age populations in 2050 required to keep dependency ratios at 2020 levels. That gap ranges from 11 percent in Sweden to 43 percent in Austria.

Worker shortages are appearing first in industries that are less attractive to native younger workers, and the range of occupations facing a lack of labor is considerable. Beset by the double crises of Brexit and COVID-19, both of which have restricted access to migrants willing to do the work, the UK is seeing challenges filling positions in laundry services, car valet services, transport, hospitality, construction, butchering, bricklaying and welding, social care work, nursing, engineering, meatpacking, cheesemaking, factory work, and even daffodil and cannabis farming. But shortages have been building for years and are happening in the EU as well: the union as a whole is seeing labor shortages in construction, engineering, software development, and health care. Germany has seen a migration slowdown exacerbate shortages of engineers, nurses, care workers, cooks, and metal workers. This is not a crisis that will end with the pandemic or (apparently) that can be solved by free movement within the EU alone. And while automation and outsourcing, greater gender equality in labor force participation, and raised retirement ages might all help ease the problem, the evidence is they will be insufficient to the scale of the challenge.

Meanwhile, “business as usual” migration patterns as forecast by the United Nations will play some role in mitigating the aging crisis. The gray bars in Figure 2 depict how much larger the 2050 old-age dependency ratio would be under the UN zero migration forecast as compared to the level of migration they predict under business as usual. Switzerland’s dependency ratio would hit 66 percent if there was no migration between 2020 and 2050, as compared to 54 percent with the impact of migrant flows. For Norway, the same numbers are 53 as opposed to 43 percent.

Nonetheless, it is clear that business-as-usual policy towards worker mobility is not enough to forestall a significant rise in old-age dependency ratios across Northern Europe, and the sclerotic economic growth and fiscal challenges that are likely to accompany that—even allowing for other adaptation strategies. The countries of the region need to adopt active labor market strategies designed to attract both temporary and permanent migrants from regions where the working age population continues to expand, dependency ratios are falling, and good jobs are scarce. That means going beyond opening up more visa slots to training, qualification recognition, and facilitating mobility. As George Yang and I have argued, Africa is the obvious source, home to a rapidly increasing working age population for which countries in the region are struggling to find good jobs. Greater labor mobility between the two neighboring continents has the potential for immense benefits to both regions as well as the workers themselves.

Publication
From Displacement to Development: How Kenya Can Create...
Jimmy Graham and Sarah Miller