Migration is a crucial and cross-cutting topic within development—and one of the  seven current components in our annual Commitment to Development Index (CDI), which ranks rich countries on their dedication to policies that benefit people living in the poorest countries. We consider the international mobility of workers as a powerful tool for poverty reduction and assess countries on their handling of migration issues.

For the next CDI, we are extending the coverage from “rich countries” to include other important development actors. Turkey, not previously included in the index, has become a significant development actor due to the influx of millions of refugees. In the first of a series of blogs as we develop the CDI, we look at how Turkey, a member of the G20, would score if it was included in the migration component of the current CDI.

Our latest analysis shows that Turkey ranks first on our refugee indicator, with a large resulting development contribution. However, its broader migration policies, including the integration of refugees and migrants, appear less development friendly and it would rank 21 out of 28 on our current overall migration measure.

Beyond aid: Promoting development through migration

When people think of how much a country contributes to development and poverty reduction, aid is usually the first thing that springs to mind. The CDI was developed to recognise that policies in areas like Security, Trade, and the Environment, also matter hugely.

A country’s migration policies can be hugely important in how they help poorer countries. Migrants have opportunities to earn higher incomes, access knowledge, gain valuable skills, and send remittances back. Refugees can not only find safety in their host countries; they can also find opportunities to build lives and livelihoods.

Our colleague Michael Clemens has shown that between 1960 and 2013, of the 71 countries that grew to middle-income or higher, 90 percent of them also saw a rise in their number of emigrants. For countries that remained poor, there was no rise. This suggests that development and emigration go hand in hand.

Turkey hosts over 3.6 million refugees, making it the largest hosting country in the world. The vast majority of these refugees are Syrians, displaced after the 2011 civil war. As of 2017, Turkey had taken in 54 percent of the total number of Syrian refugees, with Lebanon in a distant second, hosting 15.7 percent. This illustrates a broader trend with refugees: they tend to move to neighbouring countries or countries in the same region, often in the hope they can one day return home. While Germany’s openness to refugees has been rightly lauded by the development community, by nature of its proximity to Syria, Turkey has hosted around three and a half times more in the latest data year. 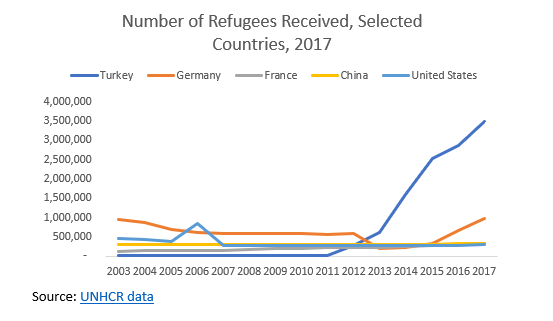 How does Turkey’s refugee and asylum contribution compare?

As mentioned above, Turkey would be a new addition to the CDI. So we’ve calculated what its score would have been on the migration measure of the 2018 CDI, had it been included. There are several indicators in the overall score (see the full methodology here):

On the Refugees measure, Turkey was well ahead of the other 27 countries assessed, although its score on approving asylum applications was much lower than most other countries. By assessing these six indicators, we are able to determine Turkey’s overall ranking on migration. 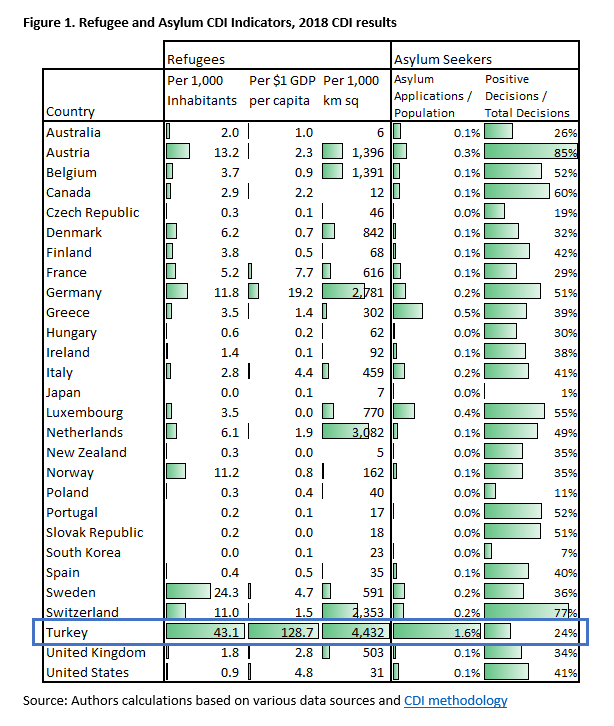 But what about the wider CDI migration measures?

Despite all that Turkey has done for refugees, they are in the bottom half of the overall migration measure, at 21 of 28. Given the nature and breadth of our index, Turkey’s very high score in number of  refugees accepted is not sufficient to compensate for its poor score on the other indicators, such as the percentage of people granted asylum. 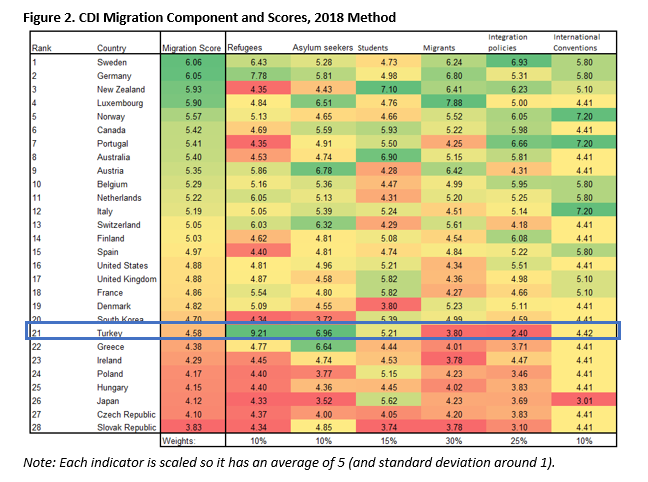 What is driving the low score, and how could Turkey improve?

Turkey scores just above average on International Students and International Conventions but well below average on Migrants overall. But the indicator pulling it down is its Integration Policies. This indicator is based on the Migrant Integration Policies Index (MIPEX), a tool that measures policies to integrate migrants across 167 policy indicators. The most problematic areas of Turkey’s integration policies, according to MIPEX, were on refugees’ access to education and the labour market.

Turkey’s MIPEX score was flat for a few years before 2014, so the arrival of Syrian refugees was not the original cause of its low score. But the magnitude of the influx makes these problems pressing, and the tensions surrounding it perhaps make them harder to address. Anti-refugee sentiment is at very high levels—with one study finding that 86 percent of Turks want refugees to be sent back to Syria. The Turkish government has recently expressed interest in granting refugees citizenship—which has the potential to improve integration—but public pushback against this has been strong raising concerns that this is politically motivated.

Budget allocations may also be an issue. Distributions to subnational governments are guided by population numbers that do not include refugees, so resources and social protections are stretched thinly in areas where refugees are numerous.

Turkey retains a geographic limitation to its ratification of the 1951 UN Convention on the Status of Refugees ("Refugee Convention"), which means that only those fleeing "events occurring in Europe" can be given refugee status. Others are given temporary protection. This prevents Turkey from realising the benefits of granting these 3.6 million people full refugee status, and therefore limits labour market access and skill contributions, fiscal benefits, and higher incomes for nationals. There has been some limited progress on granting labour market access to Syrian refugees (as our colleagues Cindy Huang and Jimmy Graham note in their work with Refugees International on broadening formal labour market access for refugees, but many still do not have access).

Turkey has made some progress on developing its integration policies in recent years. The MIPEX assessment was undertaken in 2015 and focused on policies in force in 2014. Our colleagues Cindy Huang and Jimmy Graham note in their work with Refugees International that Turkey has broadened formal labour market access for refugees and that there have been over 7,000 companies founded by Syrians. While there has been some limited progress in this area many refuges still do not have access to the formal labour market. Other new policies include funding education through the Conditional Cash Transfer for Education and a work permits program for Syrians, though this is an unpopular policy and is plagued by obstacles and disincentives, and restricts the refugees to working in the provinces in which they are registered, which are often not where the larger labour markets are.

Turkey has done more to host refugees than any other country, a fact that is recognised in the approach we use in the CDI. Still, it has scored poorly on its ability to integrate these refugees effectively which has meant that it scores in the bottom half on the migration component. This illustrates a key concept of the CDI: that development is multi-dimensional, and that countries can learn from each other’s policy approaches.

We are revising the CDI to incorporate other new countries over the coming period. A major challenge will be finding common data for all of the countries we hope to incorporate. Our migration integration measure from MIPEX, already four years old, does not extend far beyond European countries.

We’d be very glad to hear from researchers with an integration measure which covers a broader range of countries, or on other measures we should be considering. Please leave comments below, or email us at imitchell@cgdev.org and lrobinson@cgdev.org. We’re grateful for comments and contributions from Helen Dempster and migration colleagues. All views and any mistakes are solely those of the authors.