Tropical Forests Equal to the Size of India Will Be Lost by 2050, Unless We Act | Center for Global Development | Ideas to Action Skip to main content

Tropical Forests Equal to the Size of India Will Be Lost by 2050, Unless We Act

An area of tropical forest the size of India will be deforested in the next 35 years, burning through more than one-sixth of the remaining carbon that can be emitted if global warming is to be kept below 2 degrees Celsius (the “planetary carbon budget”), but many of these emissions could be cheaply avoided by putting a price on carbon.

These are the findings of my new CGD working paper with Jens Engelmann. We projected future emissions from deforestation by combining 18 million satellite-based measurements of forest loss from 2001 to 2012 with tropics-wide information on topography, accessibility, protected areas, crop suitability, and forest carbon stocks. We then estimated how tropical land users would respond to forest conservation policies based on how land users responded to changes in agricultural commodity prices in the recent past.

The bad news and the good news

First the bad news. Our projections show a steady rise in deforestation through the 2020s and 2030s and then an acceleration in the 2040s. Unchecked, these trends mean 2.9 million square kilometers (one-seventh the area of the world’s tropical forests circa 2000) will be cleared by 2050. That’s the size of India, or one-third of the entire United States. The carbon dioxide emitted by that destruction will be 169 billion tons—that’s like running 44,000 typical coal plants for a year.[i]

Now the good news. Many of those future emissions from deforestation could be avoided if countries rapidly put a price on carbon. The 169 billion tons of future emissions would be reduced by about one-quarter in response to a $20-per-ton carbon price in tropical forest countries (equivalent to a $9-per-ton average cost to land users, as explained below), or by nearly half in response to a $50-per-ton carbon price ($21-per-ton average cost).

Why reducing tropical deforestation is a bargain 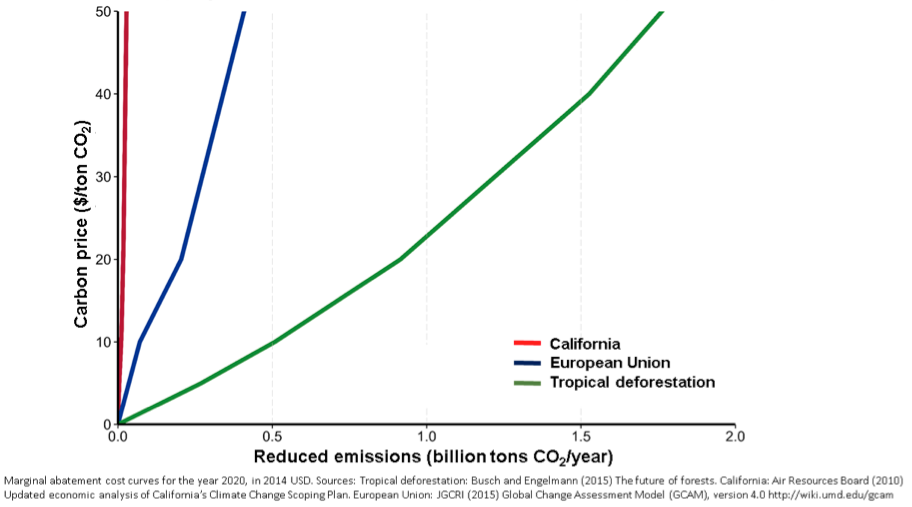 Of course, carbon pricing is just one policy for reducing deforestation. Governments might find other policies cheaper or easier to implement, often by imposing restrictions on land users. Brazil tamed Amazon deforestation using satellite monitoring, law enforcement, new protected areas and indigenous territories, restrictions on rural credit, and moratoriums on unsustainable soy and cattle production. As a result of these restrictive measures, Amazon deforestation fell by nearly 80 percent since 2004 even while Brazil’s soy and cattle production increased. In our paper we considered Brazil’s restrictive policy approach as an alternative to carbon pricing. We project that if all tropical countries put in place anti-deforestation policies as effective as those enacted by Brazil in the Amazon in the last decade, one-third of future tropical forest loss and associated emissions would be avoided. Combining restrictive measures with a $20-per-ton carbon price would cut future emissions in half.

Tropical forests: a win for both climate and development

That tropical forests offer so many low-cost emission reductions shows the potential benefits of international carbon payments, whereby rich countries pay tropical countries for keeping their forests standing. Rich countries would fight climate change more cheaply; forest countries would receive a new, green source of income that could be used to alleviate poverty. Win, win. International carbon payments have been pioneered in Brazil and Guyana at a carbon price of $5/tCO2, as well as in Indonesia and through the multilateral Carbon Fund. Our research suggests such efforts have lots of room to grow.

It is worth noting that the average cost to land users of reducing emissions is considerably lower than the hypothetical carbon market price—a $20/tCO2 carbon price implies a $9/tCO2 average cost, while a $50/tCO2 carbon price implies a $21/tCO2 average cost. In a pure carbon market the difference between the (lower) cost and the (higher) price would go as profit to land users who supply emission reductions. In practice the distribution of profits and costs from reducing emissions depends on whether forest countries’ policies favor carrots or sticks, as well as the volume of carbon payments from rich countries to forest countries.

Let’s put these costs in perspective. Not only are the costs of reducing deforestation low relative to the costs of reducing emissions in other sectors, they’re also low relative to climate damages from deforestation. The United States government’s official estimate of the social cost of carbon is around $40/tCO2 and rising; if climate change negatively affects economic growth then the cost could be several times higher. This is even before considering other domestic costs arising from deforestation—dirtier water, drought, and the like.

Watch a clip from CGD's podcast with Jonah Busch.

Our paper is not the first to estimate the marginal abatement costs of reducing deforestation (see here, here, here, here, and here from 5 to 10 years ago). But ours is the first to use groundbreaking annual satellite data on forest loss from 2001 to 2012 rather than the haphazard numbers that countries self-report to the Food and Agricultural Organization every five years. While previous studies projected that tropical deforestation will gradually decline under business as usual, patterns visible in the satellite data of how deforestation has historically spread non-linearly lead us to project that tropical deforestation will accelerate in coming decades as currently remote forest areas come under increasing pressure. And while our cost estimates are more conservative than previous studies, we still find that reducing tropical deforestation represents a sizable and relatively low-cost option for mitigating climate change.

From commitments to finance

This is a big year for the climate, with a United Nations summit in December in Paris. Many tropical countries have committed to reduce deforestation if finance is made available (through the UN climate agreement as well as commitments such as the New York Declaration on Forests and the Lima Challenge). Now it’s time for rich countries to match these commitments with performance-based finance. Reducing tropical deforestation can cut nearly five times as many emissions as Europe can at the same price—that’s a deal for the climate that’s too big and too cheap to pass up.