SDGs Ready To Go? Far From It.

After almost four years and much fanfare, 193 nations agreed to 17 Sustainable Development Goals (SDGs) and their associated 169 targets at last September’s UN Summit. You’d probably then assume that we’re all set to start the SDG agenda on January 1, 2016. Not quite so fast. Arguably the most important part of the agenda – the indicators that will determine what we actually measure and how we judge progress – has yet to be decided.

The decision on SDG indicators is in the hands of the Inter-Agency Expert Group on SDG Indicators (IAEG-SDG), a mix of UN statistical experts and member states. The IAEG-SDG have set themselves a March 2016 deadline to deliver a list of indicators to measure the SDG agenda. So where are we in the process?

Could there be over 200 SDG indicators?

The short answer is yes. After whittling down 1000+ indicator proposals to 226 potential options, the IAEG-SDG met in late October to further refine the potential list. As shown in the handy graphic below, the group managed to leave the meeting having tentatively agreed upon 161 indicators (color-coded green by the UN). This left 63 indicators that required further discussion or methodological improvements (color-coded as grey). 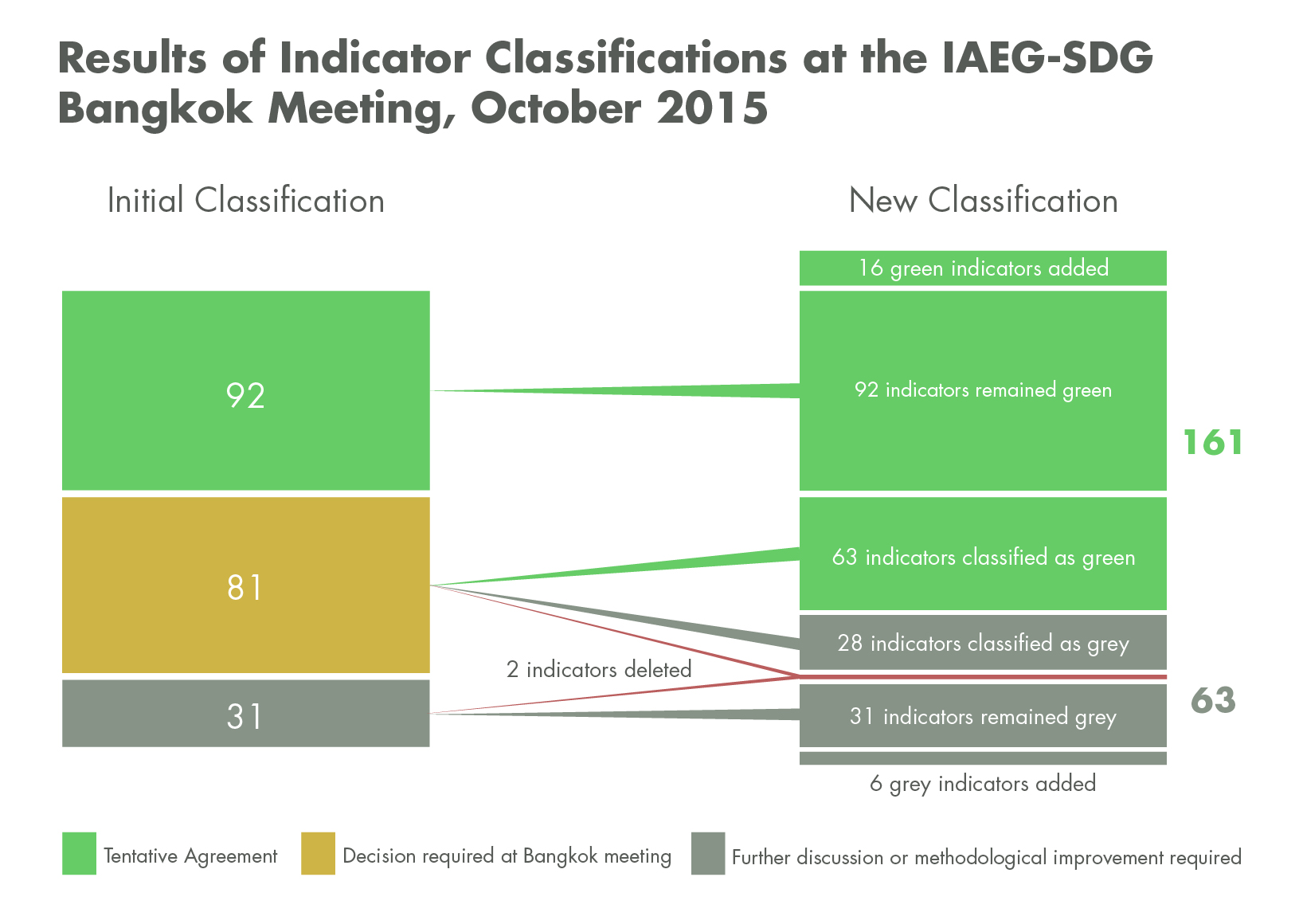 Right now, the indicator conversation is largely around the 63 indicators that require further discussion and refinement. We are in the midst of a public consultation period (through December 15) on these specific indicators, and the IAEG-SDG has helpfully asked member states and civil society to complete a survey that notes specific questions and needs the group has around these undecided indicators.

The problem with this cohort of potential indicators is that a week of consultations and the best data experts in the world won’t lead to a quick answer. Some indicators require major methodological advances and entire new data structures for collection and analysis. And these “grey” indicators aren’t all necessarily those issues for which measurement seems impossible. The indicator for target 1.4 to promote access to basic services is currently classified as grey due to a lack of agreement around what “basic services” constitutes.

It would be easy to write off the 63 indicators in favor of simply focusing on the 161 indicators for which there is agreement. (Indeed 161 indicators is already a vast number of indicators that countries will have to track annually.) However, the UN has noted that every target must have at least one indicator. There are currently 45 targets entirely defined by “grey” indicators, including three targets in Goal 1. That is 27 percent of the SDG agenda.

Why the rush to finalize SDG indicators?

To me the big question then becomes: why the rush? It took almost two years to agree on a final set of indicators for the Millennium Development Goals (MDGs). Then UN Secretary-General Kofi Annan offered goals, targets, and potential indicators to the UN Assembly in September 2001 with a note that other indicators were to be decided. The UN finalized the MDG indicators in 2003 and even then added an additional 12 new indicators as late as 2008.

The IAEG-SDG intends to discuss the 63 “grey” indicators in a series of special sessions organized by theme. It would be a shame to hurry along these discussions in pursuit of an arbitrary deadline. The indicators are the beating heart of the SDG agenda. Without them, the agenda can’t come alive through implementation. But to rush along and instill a weak heart would also be a grave mistake.