What Comes After the Demographic Dividend? East Asia is Finding Out

This is the first in a series of blogs looking at regional aspects of future global demographic and migration patterns discussed in my paper Global Mobility: Confronting A World Workforce Imbalance.

East Asia’s miracle countries are the stuff of both economic legend and considerable debate: what allowed the historically unprecedented growth that propelled some of the poorest nations in the world to high income status? One part of the story may be demographics: East Asia saw rising life expectancy and declining birth rates that dramatically, if temporarily, increased the proportion of the population that was of working age. More workers per head of the population led to more output per head for the population. Take China: only 45 percent of the population was aged between 20 and 64 in 1970 according to the United Nations. By 2015, that had climbed to 66 percent. But between 2015 and 2020, the share began to fall again, to below 65 percent. That’s just the start, the result of falling birth rates and a rising population of retirement-aged people. And it is a pattern that’s more advanced in other countries in the region. Absent a policy response, that could portend a cursed demographic future.

Japan is leading the way. As George Yang and I discuss in our recent paper, a quarter of the country’s population is already over the age of 65, and this has been a significant reason for two decades of sluggish economic growth. Responses including trying to attract more women into the workforce, raising the retirement age, and embracing automation have helped mitigate the impact (the country raised the normal retirement age from 50 to 65 in four decades), but have proven insufficient. Long wary of migration (temporary or permanent), the Japanese government now sees it as a central part of the response to aging-induced sclerosis. But it has proven hard to get people to come: in 2019, a new visa scheme attracted less than 3 percent of the migrants Japan had hoped to bring in.

Japan’s demographic present is the near future for a number of East Asian economies. South Korea has the lowest fertility rate in the world—at 0.9 births per woman. But other East Asian countries aren’t far behind. Hong Kong and Singapore are at 1.1 births, Thailand 1.5, and China at 1.7—all considerably below the “replacement” rate of 2.1 births per woman. And according to UN forecasts, working age populations are set to shrink as the number of retirement-age people rapidly expands. In Japan, the number of people in the 20-64 age bracket will be 28 percent lower in 2050 than in 2020. That drop will be 34 percent in South Korea, 21 percent in Thailand, and 17 percent in China (in Figure 1, the gray bars depict the percentage change forecast for the population aged 20-64 between 2020 and 2050). 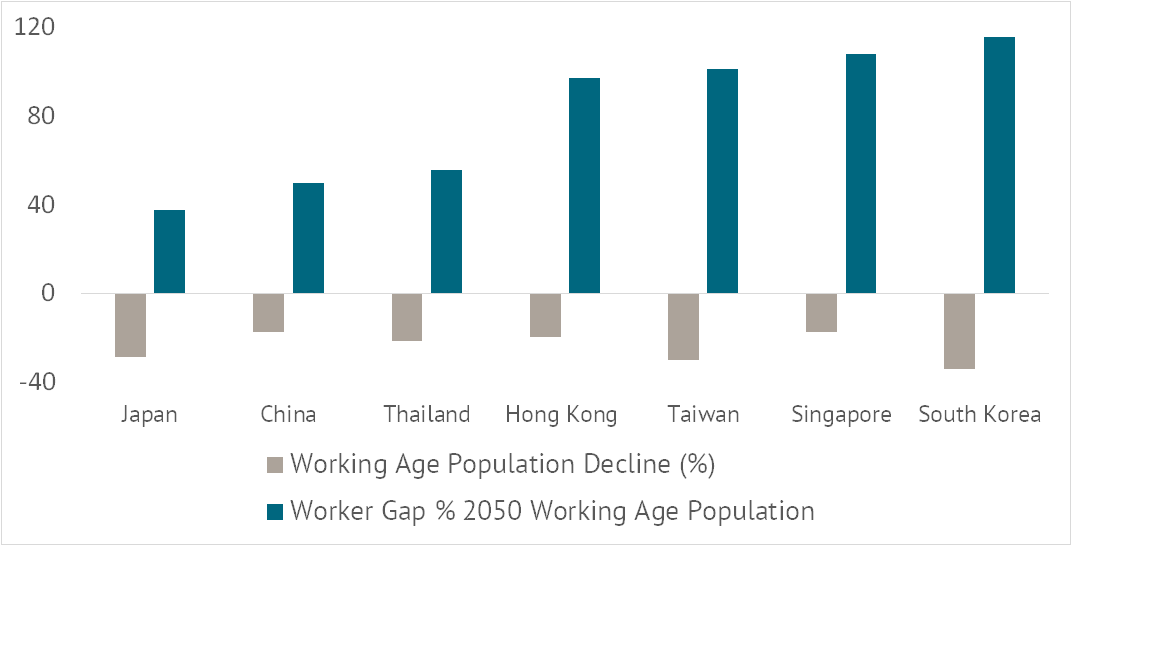 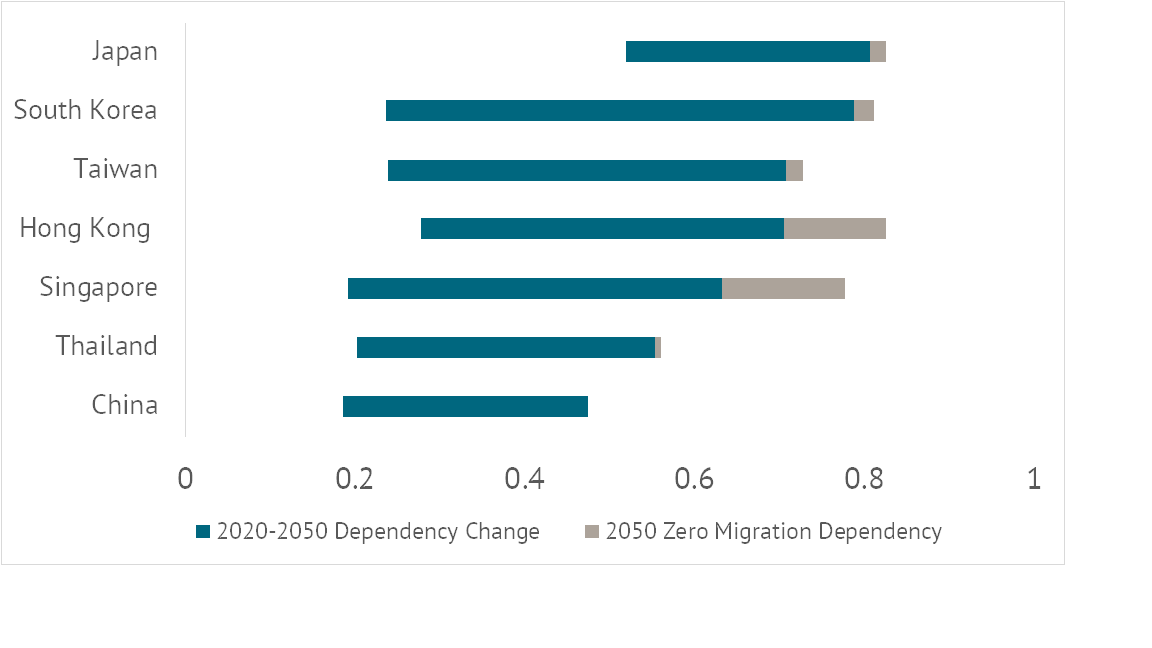 As in Japan, there is a role for raising retirement rates, faster automation, and higher women’s labor force participation to help fill the worker gap across the region, but Japan’s experience also demonstrates these approaches will be inadequate to the scale of the problem. That leaves worker mobility—more temporary and permanent migration.

Most richer East Asian countries have traditionally seen limited immigration flows. That’s reflected in the United Nations’ current forecasts for the impact of migration on demographic trends to 2050. Comparing the UN predictions for populations under a zero-migration scenario (no flows in or out) to those under “business as usual” migration patterns, predicted migration under business as usual does little or nothing to reduce old-age dependency ratios in the region (the gray bars in figure 2 depict how much larger the 2050 dependency ratio is under the UN zero migration forecast). Two exceptions are Hong Kong and Singapore, traditionally far more open to temporary and permanent migration (with 2015 migrant populations 39 and 45 percent of the total, respectively), where dependency ratios would be 10 percent or higher absent predicted migrant flows.

That said, there are local sources for greater labor flows to help fill the worker gap in the aging countries. In 2050, the Philippines will still only have an old-age dependency ratio of 20 percent, about the same as Thailand or China today. Indonesia’s, at 27 percent, will be about the same as Hong Kong’s today. Their working age populations will grow significantly over the next 30 years. The Philippines will see an increase in the 20-64 population of about 26 million—that is the same size as the 2050 worker gap in South Korea. Indonesia will add 30 million to its working age population between 2020 and 2064, about the same as the 2050 worker gap in Thailand and Taiwan combined. A little further afield, the countries of the Southern Asia region as a whole will see an old-age dependency ratio of just 22 percent in 2050, and add 339 million to their working age population between now and then—that compares to a worker gap of 384 million in China.

Many of these workers will struggle to find good jobs at home. The UNDP has estimated that between 1991 and 2013, India’s working age population increased by 300 million while the number of employed people increased by only 140 million, for example. This challenge will grow as India adds about 200 million more working age people in the decades to come. If some of those new workers are willing to move from their comparatively low-productivity, high-worker-availability home countries to the higher-productivity, low-worker-availability countries of East Asia, it would be an economic boon to them, the countries they leave, and the countries they travel to. The challenge will be getting that to happen, which will take considerable policy change at the least

East Asia is not alone in facing the challenge of an aging workforce: it is a phenomenon embracing high- and upper-middle-income countries worldwide. But that only adds to the urgency to respond. The region’s high- and upper-middle-income countries need to develop or dramatically expand and improve on the conditions associated with proactive labor mobility policies like Singapore’s Foreign Worker Permit and S-Pass. And they should accept more refugees (Japan accepted just 0.4 percent of applicants for asylum status in 2019, for example). The priority should be to create safe and equitable channels for worker mobility covering both worker rights and local safety nets and services, that benefit all three of host populations, those who move, and those they leave behind.

The restrictions on movement of people put in place to fight the COVID-19 pandemic have given a taste of the future: Thailand has about three million migrant workers who account for as much as half of the labor force in a number of export industries including food and rubber production. Some companies in those sectors said they cut back production in 2021 because of the shortage of new migrants. The fishing and construction industries have also blamed lack of (temporary) migrants for labor shortages. Malaysia (in palm oil, construction, and manufacturing) and Singapore have faced similar issues, while Korean and Chinese manufacturing firms are finding it increasingly hard to fill openings. As the local workforce ages into retirement, the (hopefully) temporary issues associated with the pandemic will become a constant struggle to find employees. Crafting policy responses that allow for safe, productive, and considerably expanded labor flows should be an urgent priority post-pandemic.