These are the findings of a study published this week in the Proceedings of the National Academy of Sciences that I authored with colleagues at the Center for Global Development, Conservation International, World Resources Institute, Duke University, the University of Maryland, and the Woods Hole Research Center.

Now the fate of Indonesia’s forests—and President SBY’s legacy—is in the hands of Indonesia’s new president, Joko “Jokowi” Widodo.  The moratorium policy comes up for renewal in May, 2015, and President Jokowi will decide whether to keep the policy in place, or to expand it.

President Jokowi’s decision will have global repercussions.  Globally, more than 10% of greenhouse gas emissions come from net deforestation, and more of these emissions come from Indonesia than from any other country. Indonesia is responsible for around one-third of emissions from tropical deforestation, driven largely to produce palm oil, paper, and wood products for consumers in other countries. In recent years Indonesia has ranked among the top five greenhouse-gas emitting countries.  If Indonesia can slow its deforestation, as Brazil has, then it will help mitigate climate change on a globally significant scale.

Though Indonesia’s moratorium policy has been widely discussed for years (see here, here, and here), our study is the first to quantify its likely effectiveness at reducing emissions.  We did so indirectly, by first estimating what would have happened to Indonesia’s emissions from 2000–2010 if the moratorium had been in place over that decade. We estimated that if Indonesia’s moratorium policy had been in place from 2000–2010, emissions during that decade would have been 213–615 million tons of CO2 (2.5–7.2%) lower than actually occurred (Figure 1)—as much as the entire emissions from Lebanon or Denmark over that period and possibly more than emissions from Norway. 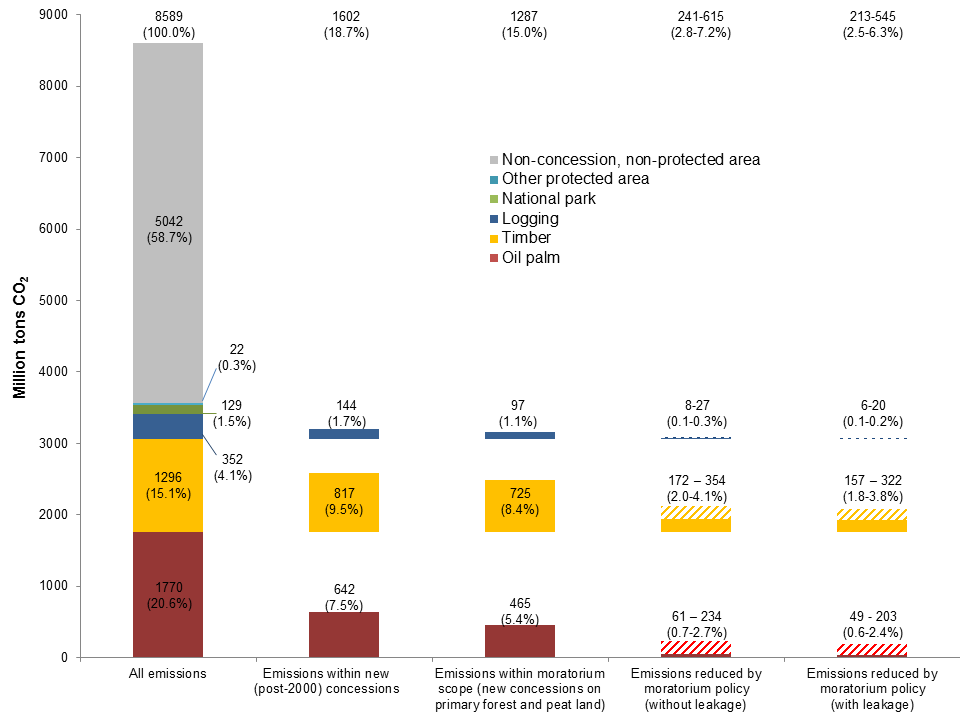 Figure 1. Emissions and reductions in emissions from deforestation and peat degradation by land-use designation, Indonesia, 2000–2010, in million tons CO2 (percent of total) if the moratorium policy had been in place over that decade. Source: Busch et al. (2015)

We then projected those results forward to estimate the likely impact of the moratorium since 2011. Without Indonesia’s actual moratorium from 2011–2015, its emissions from deforestation and peat would have been an estimated 1.0–2.7% higher. In extrapolating pre–2010 data to the post–2011 moratorium we assumed that all issuing of new licenses had in fact been completely suspended, and we ignored some indirect ways in which the moratorium might have influenced behavior (e.g., a rush to acquire new licenses in the months before the policy came into effect, or a chilling effect on opening peat lands within existing concessions).

The amount of carbon that Indonesia has likely kept out of the atmosphere with the moratorium policy is large in absolute terms, but small relative to the country’s total emissions and its policy targets. If Indonesia is to meet its target of reducing emissions 26–41 percent by 2020, a stronger policy response is needed.  Here are six recommendations to make that happen: “three E’s” for President Jokowi to consider before he makes a decision on the moratorium in May, and “three P’s” for others to assist.

Enforce. Though its effect on emissions has likely been modest, the moratorium represented a political and symbolic sea change in how forests are treated in Indonesia.  The moratorium created an opening for greater law enforcement and further reforms in the forest sector; what happens next is up to President Jokowi.   One hopeful sign is a transfer of the function of issuing concession licenses out of the Ministry of Forestry, where decisions to grant licenses were widely regarded as “transactional,” to a new one-stop permitting service for investors administered by the Indonesia Investment Coordinating Board.

Price. Without a price on carbon pollution, emission reductions by some land-users will be needlessly low, while emission reductions by other land-users will be needlessly expensive.  Our paper estimated that a hypothetical carbon price of $3.30–19.45 could have been as effective as the moratorium, by spreading the responsibility for slowing deforestation to license-holders of pre-existing concessions and land users outside of concessions.  Carbon pricing also has the benefit of creating winners as well as losers. But carbon pricing requires the development of new institutions for implementation, while a moratorium can be enacted immediately.  Thus the current moratorium is a good bridge strategy to future carbon pricing.

Publish. The precise amount of carbon kept out of the atmosphere by the moratorium is not as clear as it could be due to limitations of the available data.  Researchers would benefit from more comprehensive and transparent data on the location and establishment dates of concessions being provided to public, as is being enabled through Indonesia’s One Map initiative. A standard and scientific definition of primary forests should be made public as well, perhaps based on recent work by Belinda Margono and co-authors.  Further scientific research is also needed on the extent of peats soils and emissions arising from their degradation.

Pay. While the success of the moratorium policy rests with Indonesia, developed countries can help Indonesia achieve its goals by putting results-based finance on the table.  Norway’s 2010 pledge of up to $1 billion in results-based finance for Indonesia accelerated progress on addressing deforestation.  Other rich countries should join Norway and Germany in scaling up their results-based payments for forests.  Rich countries have committed to international results-based payments for reduced emission from tropical deforestation (REDD+), but funding to date for REDD+ has been too low and too slow.  The head of Indonesia’s REDD+ agency, Pak Heru Prasetyo, has called for $5 billion a year in external funding to help reduce deforestation.

In sum, the current moratorium policy has probably had a modest effect on reducing emissions. But if Indonesia is to meet its climate targets, and everyone the world over is to enjoy the benefits of a safe and stable climate, an even stronger policy response is needed, with 3 E’s (“extend, expand, enforce”) and 3 P’s (“price, publish, pay”). 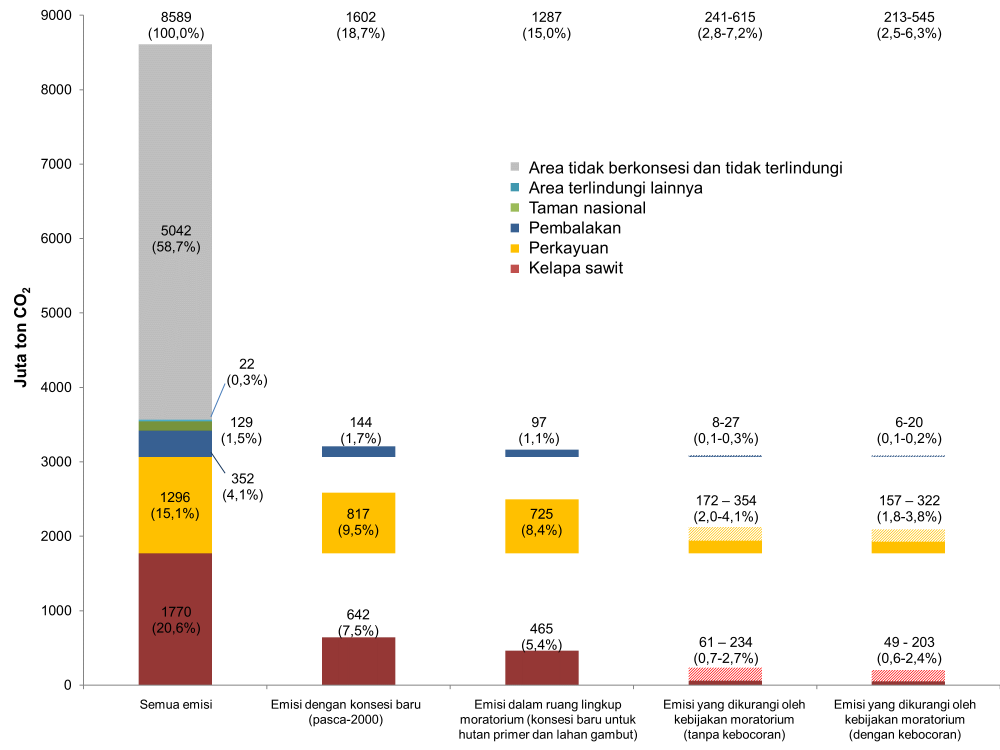