The Importance of Domestic Resource Mobilization for Debt Sustainability

As my colleague Sarah Rose aptly points out in a recent blog post, USAID is promoting domestic resource mobilization as a central component of USAID’s “journey to self-reliance” framework. But even for countries that are far away from graduating from foreign aid, the importance of domestic resource mobilization for maintaining macroeconomic stability and sustained economic growth is well documented. A look at the experience of countries that have received HIPC debt relief validates this point and underlines the need for attaching a high priority to tax policies and practices in international assistance programs for low income countries.

In 2008, a number of HIPC Initiative beneficiaries had yet to receive full debt relief from the initiative. Almost half were either in debt distress or were at a high risk of debt distress. By 2014, 35 of the 36 countries that have benefited from HIPC debt relief had reached the completion point of the process and had considerable amounts of debt wiped off their books. The impact with respect to reducing debt distress was impressive. However, as can be seen in the chart below, since 2014 there has been a steady increase in the risk of debt distress among HIPC beneficiaries, a rather alarming development given the billions of dollars that have gone into the initiative and the conditions attached to it. 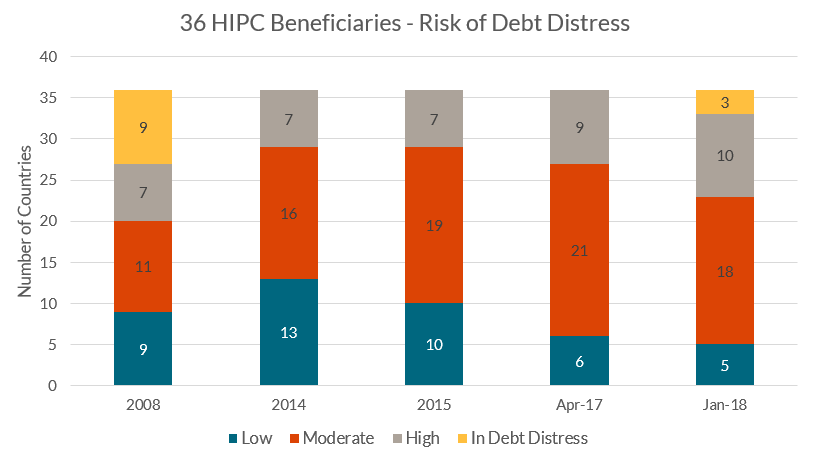 A recently released report by the IMF entitled, “Macroeconomic Developments and Prospects in Low Income Developing Countries (LIDCs)” explains in great detail the reasons for the elevation in the risk of debt distress among low income countries, including the HIPC Initiative beneficiaries. One of the primary reasons was a decline in commodity prices that led to a drop in revenues for many commodity exporters not matched by a reduction in expenditures. But even among diversified exporters there has been a deterioration in fiscal balances leading to rising debt levels, with declining revenues the main factor in roughly one quarter of the cases. 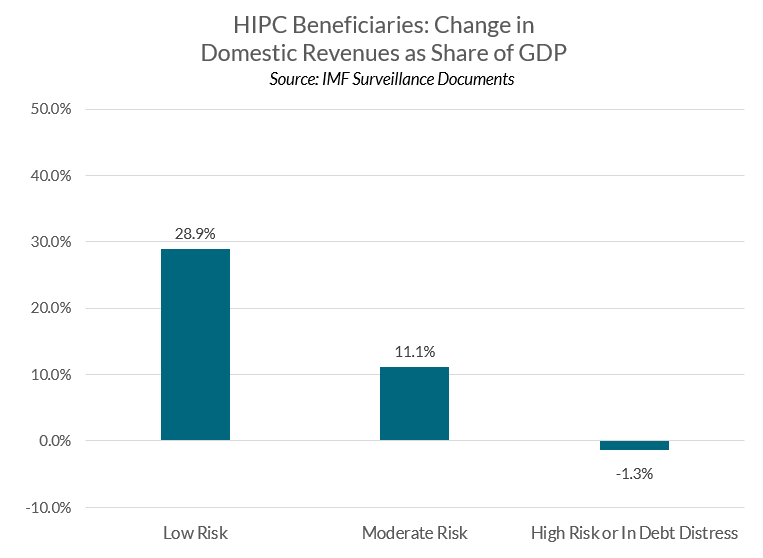 While countries in the high risk/in debt distress category have generally seen a decline in government revenues as a share of GDP, there are some notable exceptions. Both Afghanistan and Haiti, ranked as “high risk” due to weak institutional capacity rather than elevated debt levels, have had success in increasing tax revenues. According to the Inter-American Development Bank, tax collection in Haiti reached an average 14 percent of GDP during 2015-2016, up from 11 percent in 2008-2009 despite the devastating effects of the earthquake. In Afghanistan, revenue as a share of GDP rose from a low of 8.7 percent in 2014 to 10.3 percent in 2015 and well over 11 percent in 2016.

Much of the success in Afghanistan and Haiti is due to a concerted effort by government authorities with the support of the international donor community and international financial institutions. The embodiment of this collaborative approach is the little known Addis Tax Initiative (ATI), which was launched at the at the 3rd Financing for Development Conference in Addis Ababa in 2015. ATI is not a new international fund, but rather a pledge among like-minded countries to increase resources and attention on the basic practice of collecting taxes in a fair, efficient, and effective manner in order to fund government programs in a sustainable manner. It deserves the international community’s continued support through prominent references in communiques by the G20 and other groups. At the same time, more donors—including the United States—should fund the Revenue Mobilization Trust Fund at the IMF.