An Epidemic and a Commodity Price Rout at the Same Time? It Happened in 2014

The COVID-19 health crisis, and the efforts to contain it, have destroyed over $20 trillion of value in global equity markets, pose an existential threat to smaller businesses, and will lead to the layoffs of tens of millions of workers. At the same time, sharply lower global demand combined with a Saudi-Russian price war in the oil market has reduced commodity prices by around a third. While this seems unprecedented, a concurrent economy-halting epidemic and commodity price rout has happened before, in Liberia, West Africa during the Ebola outbreak of 2014.

As the United Nations Conference on Trade and Development reported last year, two out of every three developing countries are dependent on commodities, defined as having commodities constitute at least 60 percent of merchandise exports. For these 91 countries, resource dependence may make the economic impact of the coronavirus response that much deeper. Learning from Liberia’s experience can help inform policy to mitigate the negative impacts and plan for a growth rebound.

Through 2013, the Liberian economy saw impressive economic growth. After emerging from civil war in 2003, Liberia received an influx of foreign aid and debt relief, and attracted foreign direct investment commitments targeting new projects in the iron ore, rubber, and palm oil sectors that stood to be worth many times the country’s gross domestic product. With these efforts, Liberia’s real GDP growth averaged more than 7 percent from the end of the civil war up to 2013, despite the food and financial crisis of 2007-2009. The economy was buoyed by high commodity prices, improving Liberia’s terms of trade as well as incentivizing new investments.

Just as Liberia was finding its footing, Ebola struck in March 2014 and lasted for two years, taking the lives of over 4,000 people and leading the government to impose significant restrictions on movement and work. In spite of an influx of help from abroad, the outbreak resulted in a decline of economic activity and livelihoods. During the epidemic, a survey of firms in the country’s hard-hit capital, Monrovia, showed that 20 percent of businesses shut down, and employment dropped by 47 percent.

In a cruel coincidence, the prices for Liberia’s main exports fell around the same time, as shown in Figure 1. Iron ore prices had begun to fall in January 2014. By January 2016, just as Liberia was declaring itself Ebola-free for the third time (occasional cases would resurface), iron ore was trading at just US$42/ton, less than a quarter of its price in 2011. All but two of the iron ore projects shuttered, with Ebola used as an excuse (though one Canadian gold miner did manage to get operations up and running during the crisis). Rubber had also peaked in 2011 and was in a slow decline, falling to around a fifth of its peak by January 2016. Oil palm investments, where commodity prices weren’t holding up much better, faced issues with social license and access to land, and companies found it hard to execute on planned investments.

Figure 1. Commodity prices and the Ebola outbreak in Liberia 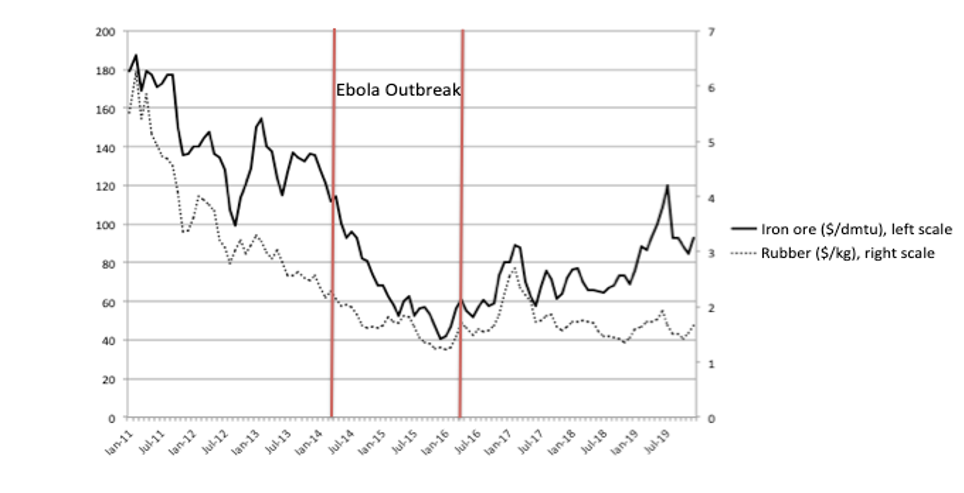 Real GDP growth fell to zero and even turned negative in 2016. Liberia’s agenda to transform its economy by 2030 had to be re-examined, and a plan focused on stabilization and recovery was launched. Foreign aid picked up to fight the Ebola epidemic, doubling by 2015, with the increase equal to a quarter of GDP. Foreign aid, while on the surface responding to the medical tragedy, also helped to bail out the economy from the commodity price shock. As Figure 2 shows, in 2013 the economy recorded nearly 9 percent GDP growth, with agriculture, forestry, and mining driving around half of the growth. However, the contribution of these sectors became zero and then negative in 2014-16 due to the fledging economy being hit by the twin shocks of the Ebola outbreak and the falling prices of key export commodities. An incipient economy-wide recovery in 2017-18, including a surge in mining from new industrial gold production, was feeble and transitory as the economy would contract in 2019 on the back of weak consumption and output, underpinned by rising inflation.

What lessons are there from Liberia for other commodity-dependent countries as they face a pandemic and commodity price slump?

First, economic growth in the resource sector is hard to create without new projects. While price recovery is a welcome relief for existing operators, it doesn’t lead to the same amount of new economic activity that comes when capital-intensive new projects are started. Even with a short-lived health crisis, the long-term impacts of low commodity prices may be significant.

Second, a general fiscal stimulus in response to the pandemic can send unexpected (and needed) relief to those parts of the economy primarily affected by commodity prices. For many low- and middle-income countries, governments do not have the ability to borrow the funds needed to reduce the economic impact of the health crisis and response. Nor do they have the ability to use their central banks to buy up new government bonds like high-income countries are doing, since a monetary expansion would depreciate the exchange rate and lead to higher costs of imported goods—including food—that will make life more difficult for their citizens. In Liberia, foreign aid provided that stimulus, but aid in that period was easy to get: only three countries were seriously hit by the Ebola crisis of 2014-16. In contrast, the whole world, and donor countries in particular, face the coronavirus pandemic.

Third, the response to COVID-19, despite its uncountable human tragedy in many countries, can serve as a big push to recalibrate the economy of commodity-dependent countries around those products and services that are likely to create prosperity in the coming decades. For most countries, that will mean a doubling down on efforts to diversify. While there is no single formula to achieve economic diversification, each country must look to the opportunities presented by the market, building on relevant local capabilities, to produce more goods and services that do not depend on global commodity prices for profitability. Governments that respond to the COVID-19 crisis with this goal in mind may be able to bounce back faster.

Mounir Siaplay is the former Deputy Governor for Economic Policy at the Central Bank of Liberia. Eric Werker is a non-resident fellow at the Center for Global Development and Senior Advisor to the International Growth Centre’s Liberia Program.