The EU Migration Pact: Why Effective Returns are Necessary | Center for Global Development | Ideas to Action Skip to main content

The EU Migration Pact: Why Effective Returns are Necessary 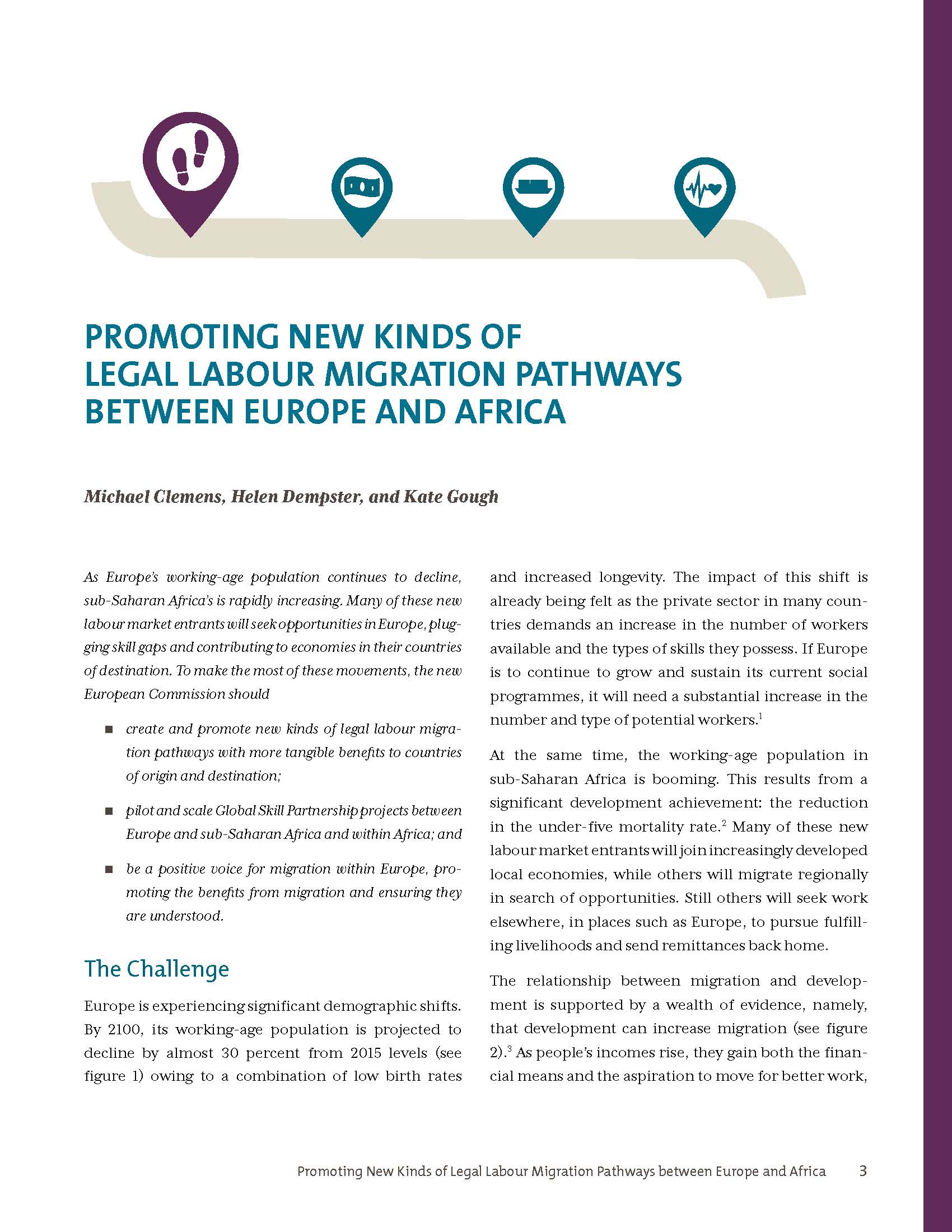 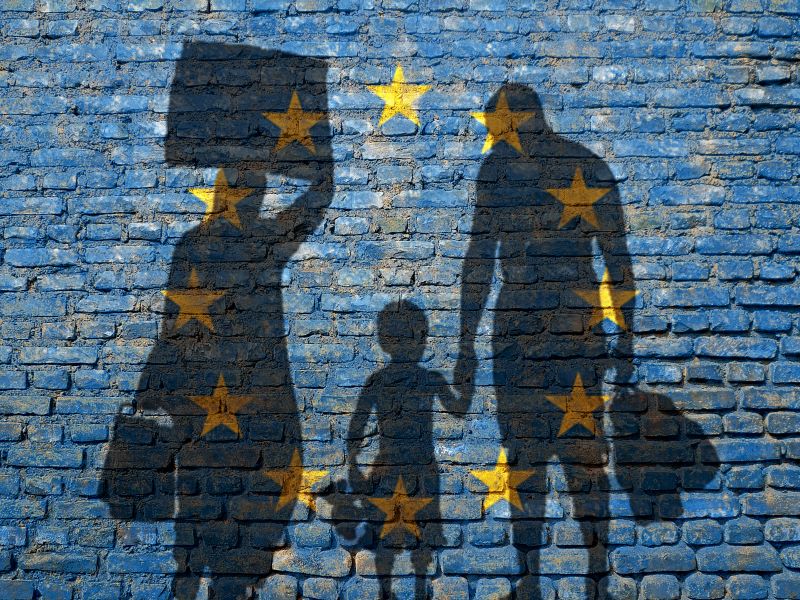 Here’s How You Can Use Legal Pathways to “Manage Migration”
Helen Dempster
and
Anita Käppeli
October 24, 2019

On September 23, the European Commission announced their New Pact on Migration and Asylum, “proposing a fresh start on migration: building confidence through more effective procedures and striking a new balance between responsibility and solidarity.”

This focus on strengthening returns and border security is important. But Europe must do more to open up new legal pathways for migration; channeling many of those who are currently applying for asylum towards more productive routes. Without this balance, Europe cannot hope to reduce irregular migration.

What does the Pact say?

The Pact has been described as a house with three floors, effectively designed to reduce the number of people moving upstairs. The first floor outlines the need for comprehensive partnership agreements, designed to “keep people… in their countries.” Such a view ignores the positive benefits of migration, in both Europe and countries of origin. In addition, the investments in addressing the “root causes” of migration within these partnership agreements have, to date, done little to prevent onward movement.

The second floor invests in increased border security and deterrence. And the third floor proposes a system of “permanent, effective solidarity,” or shared responsibility for asylum seekers. Since 1999, the European Union (EU) has been working towards a Common European Asylum System (CEAS), setting minimum standards for asylum protection and aligning procedures. While some progress has been made, in particular with regards to the rights of applicants, uniform standards when examining the grounds of the applications are still largely missing. Generally, asylum is only granted to people who qualify as refugees under the 1951 Convention—people who are fleeing persecution or serious harm. But as the grounds vary across Member States, the system currently presents a “lottery” for asylum seekers. The new Pact therefore aims to standardize asylum application success rates across European Union (EU) countries, speed up processing times, and ensure shared responsibility.

Countries can either accept asylum seekers, or engage in “return sponsorship,” taking responsibility for returning people who have a legal return order by another Member State. Such a system has been designed to appeal to both Member States who have refused redistribution in the past, and others who have been overwhelmed with new arrivals. Any returns must not violate the principle of non-refoulement—no-one should be returned to a country where they would face torture, cruel, inhuman, or degrading treatment or punishment, and other irreparable harm. As a result, usually, Member States will have lists of “safe countries” where failed asylum seekers can be returned to.

A harmonized system for returns and asylum applications is needed…

In 2019, 540,800 people applied for asylum for the first time within the EU; 206,000 were accepted. Yet, whether or not an asylum seeker is accepted hugely depends on where they claim asylum (see figure 1 as an example). While they are waiting for their decision, many asylum seekers do not have the right to work, a policy which leads to crowded reception centers, and a detrimental impact on the growth of both themselves and their host countries.

Yet the majority of asylum claims are rejected—62 percent in 2019. Every year, roughly a third of failed asylum seekers return home, through enforced and voluntary returns. And the return rate has decreased over recent years, from 45.8 percent in 2016 to 36.6 percent in 2017 (although not all Member States provide data). Returns are expensive, complicated, and require effective cooperation with countries outside the EU and those covered by its economic agreements (commonly referred to as “third countries”). Many of these third countries refuse to readmit failed asylum seekers.

This lack of a functioning return infrastructure has fostered a large population across Europe with few legal rights, and a lack of access to basic health, education, and social security infrastructure. For example, between 2013 and 2017, Italy only managed to repatriate 20 percent of their failed asylum seekers. Hundreds of thousands of them, mostly sub-Saharan African, are now propping up the agricultural sector, facing exploitation and precarious living conditions. While such populations should be included in regularization campaigns, a reformed asylum system should prevent such situations from occurring in the future.

These issues demonstrate that the EU asylum system is not fit for purpose. Prospective asylum seekers have no certainty regarding their chance of a successful application, and if they are denied, may or may not be returned home. But many of these people are seeking asylum due to the lack of legal migration pathways to Europe. Increasing these pathways, including economic migration and refugee resettlement, would reduce demand on the asylum system and create policy space for reform.

Despite the need for such reform, it will be difficult to see through in practice. For example, if a Member State elects to support “return sponsorship,” they are encouraged to use their bilateral influence to coordinate with the migrant’s country of origin. To date, many countries (particularly in sub-Saharan Africa) have largely refused to coordinate on returns. The feasibility of this proposed approach is therefore doubtful.

That being said, such a focus on agreeing on returns within a predefined period of time could provide countries of origin with more leverage to negotiate mutually beneficial and comprehensive partnership agreements.

Here, unconditional respect for the principle of non-refoulement and safeguarding the rights of those who are returned is paramount. The European Commission has proposed a “Returns Coordinator” to streamline processes and uphold legal safeguards. This coordinator should also ensure that member states provide an accessible appeals mechanism, free legal advice, and special protection for vulnerable groups. But this remains to be seen.

Why countries should opt for migrants over returns

Under the new Pact, countries could elect for “return sponsorship”, instead of taking asylum seekers. But Member States pursuing this approach are harming their own labor markets.

Let’s take Austria as an example. Austria has expressed cautious support for “returns sponsorship.” Yet Austria is rapidly aging. In 1950, Austria had 6.4 working-age people to every person over 65 (see figure 2). Today, it is 3.5. By 2050, it will have declined to 1.9. Already, the ICT, hospitality, construction, and building sectors are suffering from labor shortages, reducing productivity and economic growth.

Accepting more asylum seekers would be one way to address this gap. The vast majority of asylum seekers are young and can contribute to the labor market with the right engagement in education and training, something that Austria has under-invested in.

In the long-run, the fiscal benefit of accepting asylum seekers far outweighs this initial outlay. Some have estimated an annual GDP increase of between 0.2 percent and 1.4 percent. By opting for returns, Austria will be spending money, rather than reaping these rewards. They will also likely be sending people back to countries where they will face economic hardship, rather than making the most of their skills and talents.

In addition, Austria (and other European countries) should invest in creating new legal migration pathways to bring in migrants with the precise skills Austria needs to grow. Such pathways could be developed with key partnership countries in sub-Saharan Africa, thereby promoting development and fostering mutual migration benefit.

The new Pact is not a silver bullet, but it has to be better than the current approach (with its horrendous implications). Harmonized and consistent returns and asylum application procedures are necessary for improving the effectiveness of the system.

But these efforts must go hand-in-hand with increased investment in legal migration pathways. Europe has consistently professed the need for both, yet investment to date has not reflected this balance. Only by combining these efforts can Europe reduce irregular migration and ensure asylum seekers can offset demographic decline and plug widening skills gaps.

This is the first of three blogs written by the Center for Global Development focused on the EU’s New Pact on Migration and Asylum. The first focuses on why both returns and legal pathways are needed to effectively manage migration. The second will focus on how to operationalize Talent Partnerships. And the third will focus on how to create a true partnership of equals with African countries of origin