COVID-19 has exposed the cracks in social, environmental, and economic models underlying many high-income societies, and started conversations many previously thought too difficult. One of these conversations is around undocumented migrant workers: the role that they play in many of our value chains, the often-dire working conditions they suffer under, and the right policy moves to confront these inequalities, both now and in the future.

The United Nations has called on countries to explore “various models of regularization pathways” to ensure undocumented migrant workers can contribute to the COVID-19 response. Already, some countries have begun to make changes. Since the start of the pandemic, two European countries—Portugal and Italy—have implemented partial measures to regularize their thousands of undocumented migrant workers. Spain and Ireland are considering similar moves.

These moves are not new. Over the past 25 years, European Union (EU) Member States have implemented nearly 70 regularization programs, involving more than six million migrants. Such moves are usually driven by a combination of four reasons:

With COVID-19 comes additional considerations. Countries want to recognize and praise the role irregular migrants have played during the COVID-19 response, specifically in agriculture and care work, and include them in healthcare responses to combat the spread of the pandemic. Such justifications are laudable and should be folded into long-term policy responses.

Evidence shows that regularization policies positively affect the employment trajectories and livelihoods of regularized migrants. They are able to obtain higher wages, become more productive, increase investment, and suffer from less labor exploitation. The impact of regularization programs on more macro objectives, such as increased formal employment, is mixed. Much appears to depend on the permanence of the program, with more long-term solutions having greater effect.

These impacts, coupled with the existing and new justifications, make COVID-19 the perfect impetus for moves to regularize undocumented workers.

The Case of Spain

Undocumented migrants make an irreplaceable contribution to the Spanish society and economy. Four out of five undocumented migrants are under the age of 40, thereby offsetting the demographic decline in the Spanish working-age population. They occupy essential and COVID-19 frontline roles within the labor market including care work, agriculture, and cleaning, while paying indirect taxes.

While Spain is one of the few countries that provide undocumented workers with access to public healthcare and education, very few make use of these services (often due to age and family composition) and others avoid the formal system due to fear of deportation.

According to research recently published by Fundación porCausa and Carlos III University of Madrid, approximately 430,000 immigrants currently reside irregularly in Spain, or 12 percent of the total migrant population. As Figure 1 shows, this percentage is relatively low compared to other points in recent history.

About 77 percent of undocumented immigrants in Spain come from Central and South America, arriving legally as tourists, students, workers, or asylum-seekers, before overstaying. This is particularly relevant for Venezuelans, most of whom are denied asylum. Less than one in ten immigrants residing irregularly in Spain are from Africa, despite media attention and political rhetoric.

Figure 1. The evolution of irregular migrants in Spain 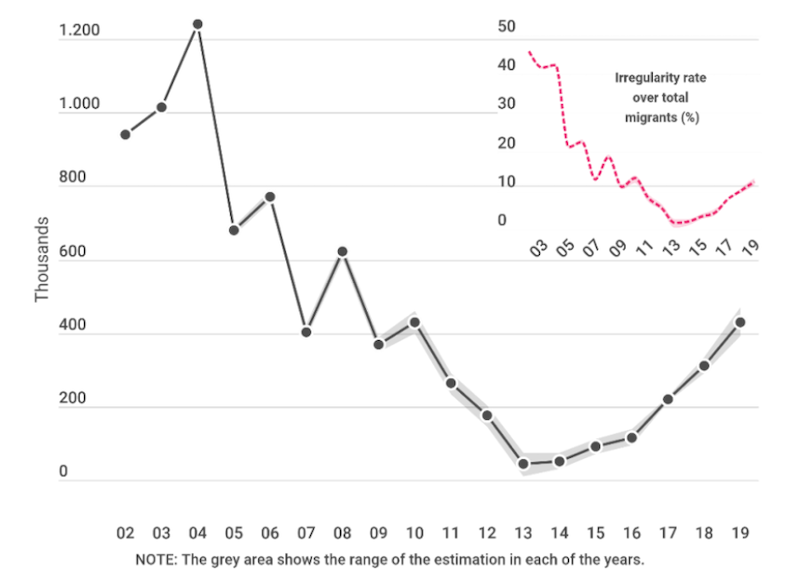 The positive impact undocumented migrants could have on Spain would be much larger if they had the legal right to work and live. According to the research, regularization would cause a person’s net contribution to the economy to increase from approximately -€2,000 to at least €3,250.

As other evidence has shown, such moves would also likely reduce labor vulnerabilities and abuses, lessen fear of accessing public healthcare and education, and ensure regularized migrants were included in all COVID-19 response strategies.

As to the effects on the country as a whole, there is very little evidence that such regularization measures would cause a significant increase in new irregular immigration from non-EU countries. Over the last two decades, the intensity of migration flows has moved in accordance with the unemployment rate. Three regularization programs in the 2000s (Figure 2) had no proven impact on migration inflows. This suggests that migration is responding to labor market and private sector demand, rather than specific policies enacted by the Spanish government.

Figure 2. The relationship between migration flows and the unemployment rate in Spain 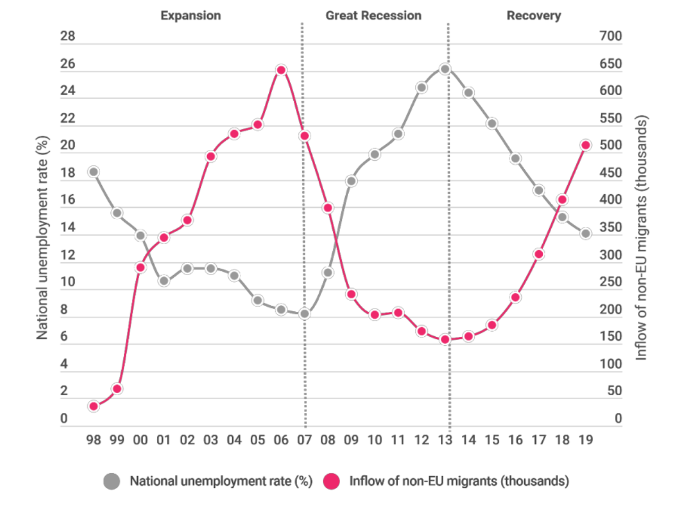 There are a number of different ways that Spain could regularize undocumented workers. In 2000, 2001, and 2005, conservative (the first two) and socialist governments (the latter) imposed general amnesties, which regularized one million migrants in total.

The current government could employ this approach again to reach the current 430,000 undocumented workers, or use a more sectoral approach. Either way, such a move would allow President Pedro Sánchez to fulfil his pledge to reform national and European migration policies, and the EU to rationalize, and recognize the benefits of, labor mobility.

Towards a Migration Governance Model

Despite their effectiveness, regularization moves are a stopgap. They do very little to address the broader social, environmental, and economic drivers compelling people to move in the first place, whether documented or not.

Researchers at CGD and porCausa have long argued for a migration governance model that pairs effective border enforcement and security efforts, with the expansion of legal pathways, and a recognition of the essential nature of migrant labor in high-income economies. This is the best way to recognize international protection obligations, reduce irregular migration, improve socio-economic outcomes, and contribute to development in countries of origin.

Such an approach will require a combination of political will and policy innovation, particularly a willingness to take risks and fail (albeit at a small scale at first). This innovation is the rationale behind the increase in legal migration pathway pilots in Belgium and Germany, as well as more established models in New Zealand, Australia, and Canada.

We also commend new organizations, such as Labor Mobility Partnerships (LaMP), that have been created to facilitate such policy moves, and are excited to see funding instruments that policymakers can access to fund legal migration pilot projects.

Before COVID-19 hit, European countries were already moving toward a new migration governance model that combined humanitarian and labor market objectives, both of which are in our long-term interest. The ability of our societies to design and implement innovative models for human mobility, adapted to the needs of the 21st century, require an unprecedented transformation in the way we see the role of migrant labor in our economy, both regular and irregular. We cannot let the shock of COVID-19 go to waste.

Event
COVID as a Gendered Crisis: Forging a Shared Agenda for...
Megan O'Donnell and Shelby Bourgault

Event
A Bank for the World: How the Business Model of the World...
Amanda Glassman and Masood Ahmed