Cutting Development Assistance after a Coup May Be Bad Response

Cutting development assistance to a country after some negative political shock is undoubtedly a well-intentioned effort by donors to incentivize better political institutions. Aid donors do not want to be seen to support coups, which would come with reputational and political risks at home. Instead, the argument is made that donors should offer a carrot and a stick to developing countries to encourage better institutions.

There are some concerns with this argument. Do the donors know best? Are rich-country political institutions the ideal for poor countries? How much of the incentive is felt by coup leaders, or are the costs borne largely by innocent citizens, including the poor?

What we may well have here is a plausible situation of multiple equilibria in the development of political institutions. Let me try to explain. I take it as given that external assistance (both technical and financial) can help develop political, legal and administrative institutions that are good for longer-term development including eliminating poverty. Some aid skeptics out there may disagree, but I think it plausible that external assistance can help promote well-defined property rights, a higher quality of fiscal management, more efficient revenue mobilization, greater transparency and accountability in the public sector and a better quality of public administration generally; in short, more capable states. These are the aspects of institutions that are emphasized by the World Bank’s Country Policy and Institutional Assessments (CPIA). Naturally these things take time, and patience is needed.

I also take it as plausible that little or no external or domestic effort will be forthcoming if the country’s institutions are just too dysfunctional to start off with. There is some minimum threshold that must be reached to have any hope of helping to develop better institutions. (Think of this as a very low score in the World Bank’s CPIA, which would essentially kill aid from the Bank, and most donors.) And I take it as likely that both external assistance and domestic efforts will start to stabilize and even decline when institutions are sufficiently well developed.

Putting these elements together (and with some more technical economic assumptions that need not bother us here) we have the makings of a classic story of multiple equilibria, known to economists as a “poverty trap,” although here I will call it a “poor institutions trap”—a PIT. The following picture helps explain how a developing country can get into a PIT, despite otherwise good initial conditions, favorable to development. 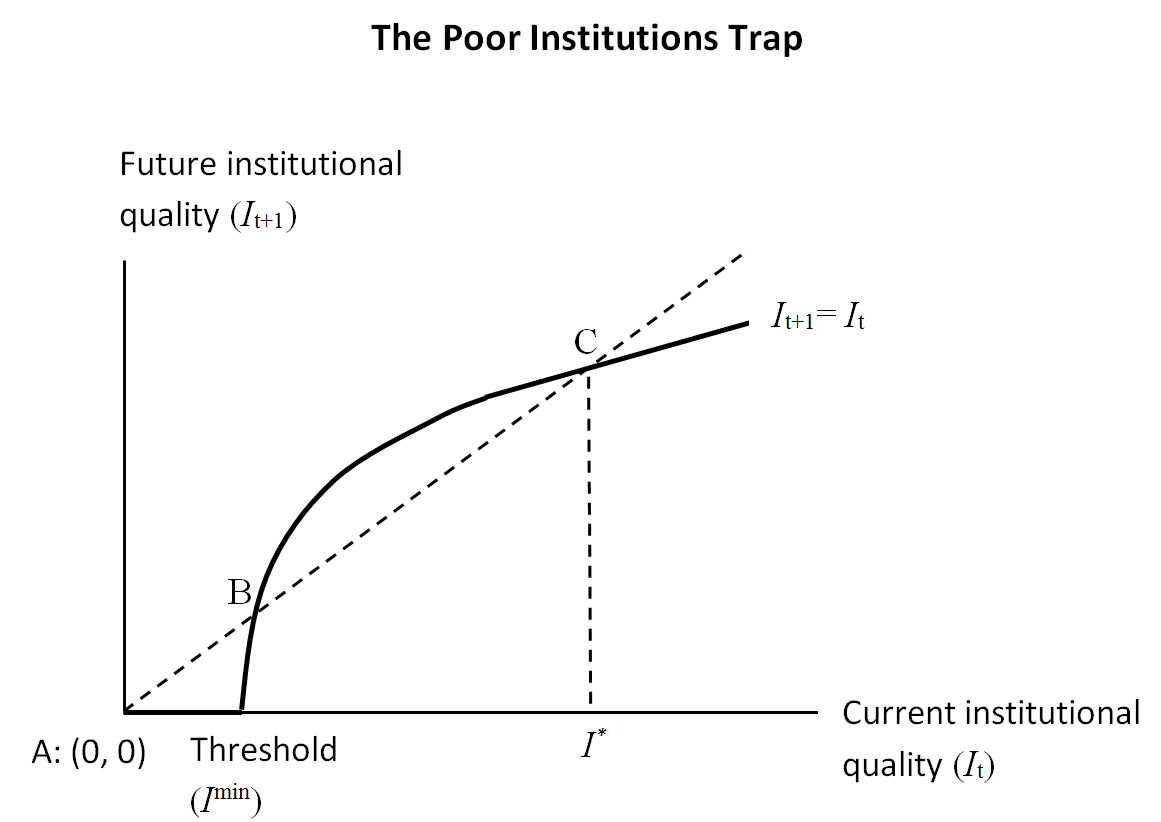 We can identify three “steady-state equilibria”—essentially meaning points at which institutions have stabilized for a given country. Point A is the PIT—the worst case in which persistently bad institutions prevail. Point C is where the country needs to be. Between these two equilibria, we have point B. This is clearly better than A, but alas it is dynamically unstable.

To better understand the implications of this instability, imagine a small positive shock to institutions in a country at its point B. This will put the country on a virtuous cycle, progressing toward point C. But a negative shock will create a vicious cycle—a downward spiral all the way into the PIT, at point A. And getting out of the PIT will not be possible with a small positive incentive for reform; then the country will just bounce back into the PIT in due course. Getting out of the PIT will require a more substantial gain in institutional quality (to get past point B) than simply reversing the (possibly small) shock that landed the country in a PIT.

I suggest that some poor countries today are at their middle point B, while others are at A. For example, I am willing to conjecture that Madagascar was at its own “point B” prior to the coup in 2009. In the wake of the coup, development assistance contracted markedly (by about half), tourism slumped (apparently it is even hard to get travel insurance to Madagascar) and an already poor country got poorer. Unlike much of the developing world, Madagascar has made no progress against absolute poverty for many years, and by some measures things have got worse. The political crisis continues.

The international community’s decision to pull out in response to the coup in Madagascar was no doubt seen as providing an incentive for a rapid rebound to democracy, and a favorable continuing trajectory of development. But when viewed in terms of my model, the impact may well have been much larger than expected, by helping to put the country in a PIT. I don’t know for sure if that is the case, but nor do the donors. And there are big risks to poor people in decisions made in ignorance. At a minimum, we should try to better understand the dynamics of institutional development—to see whether the PIT model I have sketched above is realistic, and what implications this holds for development assistance. That is not an easy research question, but it surely reflects an important knowledge gap in our understanding of development.

If my characterization is roughly right then the lesson for aid donors is clear: By all means be willing to reward positive political shocks, but be careful about punishing negative ones. Given the instability, this response may well help put longer term institutional development in the country back even further. A more prudent approach may well be to maintain the baseline of assistance, stay engaged on the planned development path and remind all of the benefits of doing so. This path should include support for better political institutions. But be wary of cutting aid in poor and fragile economies when there is a negative political shock.  That stick you are wielding may hurt far more than you think!