Since 1964, the UN has agreed on a list of the “Least Developed Countries” (LDCs)—supposedly the poorest countries in the world—to receive support such as trade preferences and international aid. The EU for example offers duty-free quota-free access to all goods exports from LDCs (with the exception of arms).

The possibility of leaving the EU means that the UK now needs to revisit the questions of whether and for which countries to offer trade preferences, particularly since the key ‘enabling clause’ underpinning trade preferences does not confine preferences to least developed countries.

Taking a closer look at the group of (currently 48) countries that make up the LDCs throws up a few surprises. First of all, as a group LDCs are on average 50 percent richer than the World Bank’s 31 “low-income countries” (those with a GNI per capita of $1,025 or less). The simple explanation for this is that the LDC category is also based on measures of human development and economic vulnerability, which means that it includes some (but not all) lower-middle income countries in addition to low-income countries.

It seems particularly odd that a couple of upper-middle income countries still make the cut. This is partly to help out small (and vulnerable) island states, but why help upper-middle Tuvalu, and not include lower-middle Tonga or Micronesia? Though there are plans for them to “graduate,” Angola and Equatorial Guinea are still currently included despite being upper-middle because their wealth is driven by oil exports that don’t benefit the majority of the population. Nigeria though is not included because its economy is too large and therefore not deemed to be vulnerable, despite its heavy reliance on a single export commodity and high level of poverty.

In total there are 35 lower-middle income countries that are excluded from the LDC list. Three countries (Ghana, Papua New Guinea, and Zimbabwe) actually refused the offer of being classified as LDC [1], presumably because they didn’t think the stigma of being classed as “least developed” would help their investment promotion efforts.

How are LDCs Classified?

The formula for classifying LDCs is byzantine. It’s a composite index including per capita income, a “Human Asset Index” (itself comprised of 4 indicators), and an “Economic Vulnerability” index (comprised of 6 indicators).

The median income and the Human Development Index suggest that LDCs are indeed *amongst* the poorest countries, but there is certainly overlap with other countries, and no particular “kink” at the “graduation” point. Whilst four countries have “graduated” from LDC status, they don’t seem to have really moved to a substantially higher level of average incomes or human development. 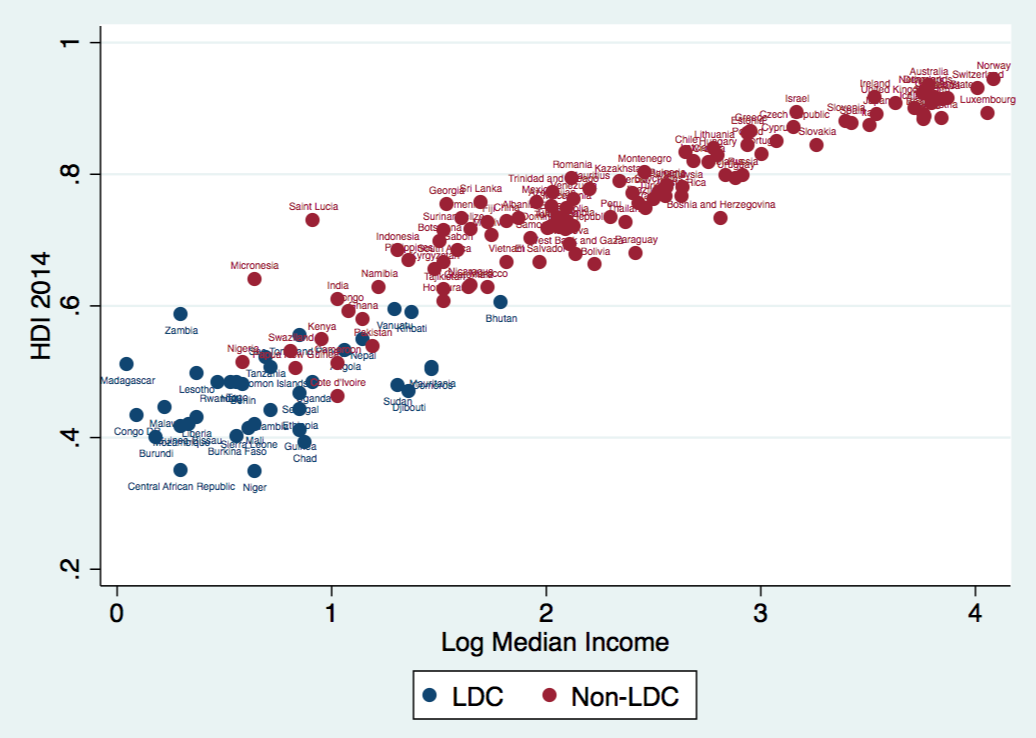 A recent paper by Marcin Wojciech Solarz and Małgorzata Wojtaszczyk makes a similar point, showing the overlap between LDCs and other poor countries on a range of indicators: for every indicator (including for example life expectancy and life satisfaction) there is a group of non-LDC countries that do worse than LDCs. 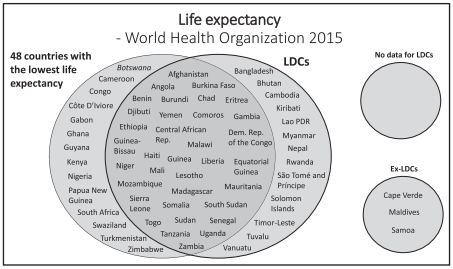 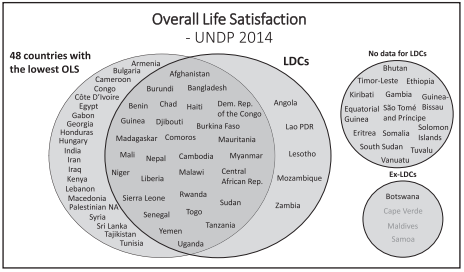 Should we even be talking about “least developed” countries any more?

The World Bank doesn’t. Earlier this year, they scrapped the term “developing countries” altogether, replacing it with the more neutral income classifications (low/ lower-middle/ upper-middle/ high) and regional groupings (Africa, Asia). Tariq Khokhar noted that Bill Gates has called the label developing country label ‘passe,’ and Hans Rosling ‘intellectually lazy.’ In many respects there is less of a stark contrast between “developing” and “developed” countries than there is used to be (for instance in infant mortality and fertility), while in other respects there are more differences within developing countries than there are between developing as a group and developed (e.g. income).

So if not LDCs, who should we give trade preferences to?

Notwithstanding the case for the unilateral reduction of all import tariffs, if the UK does choose to maintain tariffs for some higher income countries but offer preferentially lower tariffs to poor countries, who should get those preferences? The grouping of “Least Developed Countries” is really pretty arbitrary. Paul Collier has argued that preferences should be offered to those countries that are on the cusp of being able to engage in modern sector exports, and who are therefore able to take advantage of them. This group of countries may not always be the “least developed.”

So, this would argue for giving preferences to both those who need them most (the poorest countries) and those who could benefit most (those on the cusp of trade integration). A further ambition would be to have a simpler metric. One simple rule for extending preferences would be to include all low-income and lower-middle income countries. This classification would include some of the larger countries such as Nigeria or Pakistan that are currently excluded from the LDC list because their economies are too large. It’s possible that extending preferences to a larger group of countries would erode the value of these preferences. But when the EU temporarily cut tariffs for Pakistan after the 2010 flooding, it didn’t seem to hurt exports from other low-income countries.

We’ll explore this issue in more detail in a follow-up post.