Back to School: An Update on COVID Cases as Schools Reopen

Back to School? Tracking COVID Cases as Schools Reopen

Two weeks on, we’ve updated the data. In the countries where the epidemic was sizable and where schools have been open for a few weeks (figure 1), the trend remains more or less the same. A spike in France ten days ago seems to have reduced to previous levels, and may be explained by a change in how cases are reported that resulted in more than 3,000 cases being reported on one day. Finland looks like it could be heading for a second wave, but the absolute case numbers and mortality numbers remain low.

Figure 1. Daily case numbers for countries in the first wave of school reopening. 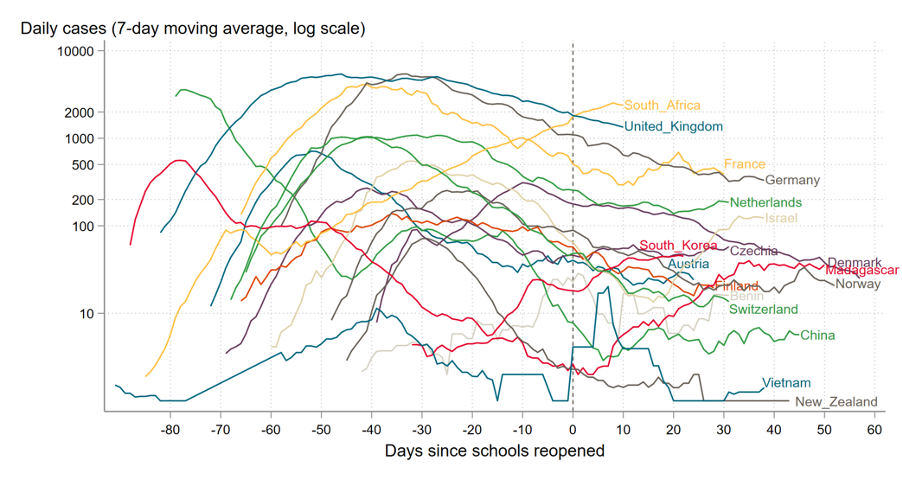 More countries have opened their schools since our last blog, including several developing countries (figure 2). South Africa opened its schools well before its peak and cases continue to rise at an alarming rate. Cases in Pakistan are also rising fast, and schools are still due to reopen in mid-July. In other countries where schools are open or soon to reopen, data is patchy and inconsistent. For example, in Zambia, no cases were reported for four straight days, then 137 were reported on the fifth day, followed by another four days of no new cases—a pattern that suggests inaccurate reporting, although overall case numbers remain low. It’s worth noting that many of the countries that have recently or will soon reopen schools may be less prepared to undertake rigorous testing and tracing than some of the countries that reopened in the first wave.

Figure 2. Daily case numbers for countries in the second wave of school reopening. 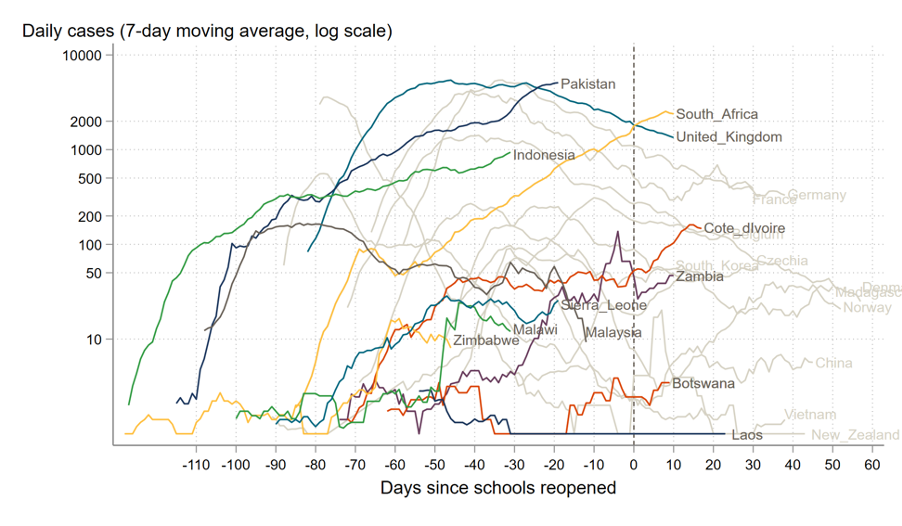 As we discussed in our previous blog, school closures and reopenings happen in tandem with other policy changes, which means inferences about the effect of reopening schools on COVID-19 cases cannot be made from this data. And, as case numbers reduce, national new case data becomes less helpful and policymakers will need to look at far more localised data to make decisions about closing schools down where outbreaks occur. Over the last few weeks, for example, schools have been closed at a local level in France and South Korea after outbreaks were identified.

We’ll continue to track reopening patterns. But in the meantime, it remains true that countries that reopened schools 25-30 days after their peak don’t tend to show a change in trend in new cases.

Thanks to Justin Sandefur.