Back to School? Tracking COVID Cases as Schools Reopen

In the last six weeks more than 20 countries have started to reopen schools as they slowly gain control of the COVID-19 pandemic. Several more countries—including England and South Africa—will open their school gates next week. Reopenings are usually for a few age groups only—often younger children—and not always in every part of the country. They are generally accompanied by mandated hygiene and social distancing measures and in many places test and trace systems were implemented ahead of school reopening.

On average, countries reopened schools 25 to 30 days after the peak in new cases. Of the twenty countries that have reopened, only three—Madagascar, Czechia, and Vietnam—look as if there may have been any change in the trend of new daily cases when schools reopened.

Planning for School Reopening and Recovery After COVID-19

Most countries that have already reopened their schools have continued their downward trend in new cases (Figure 1). But there are exceptions. Governments will need to use regional and sub-regional new case data to make decisions about localised school closures if spikes in new cases occur. For example, in South Korea around 250 schools near the capital Seoul were closed on May 28, just a few days after they opened, after a spike of 79 cases was reported. Schools across the rest of the country remain open.

Figure 1. Daily new cases in countries that have reopened schools 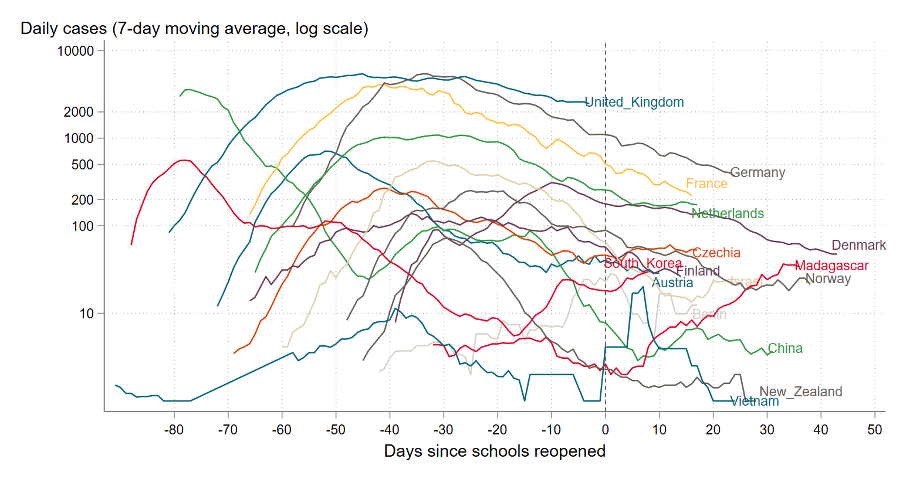 Note: Time is measured in days since schools reopened. Lines show a 7-day moving average of daily cases starting 9 days prior to when schools closed.

In addition to South Korea, we see a small secondary spike in daily cases in Vietnam after schools reopened, but the actual number of cases is low and was quickly brought under control. And in figure 2 we see that very few countries saw any change after schools reopened, although the trend in Madagascar and potentially Czechia is concerning.

Figure 2. Daily new cases in countries that have reopened schools (by country) 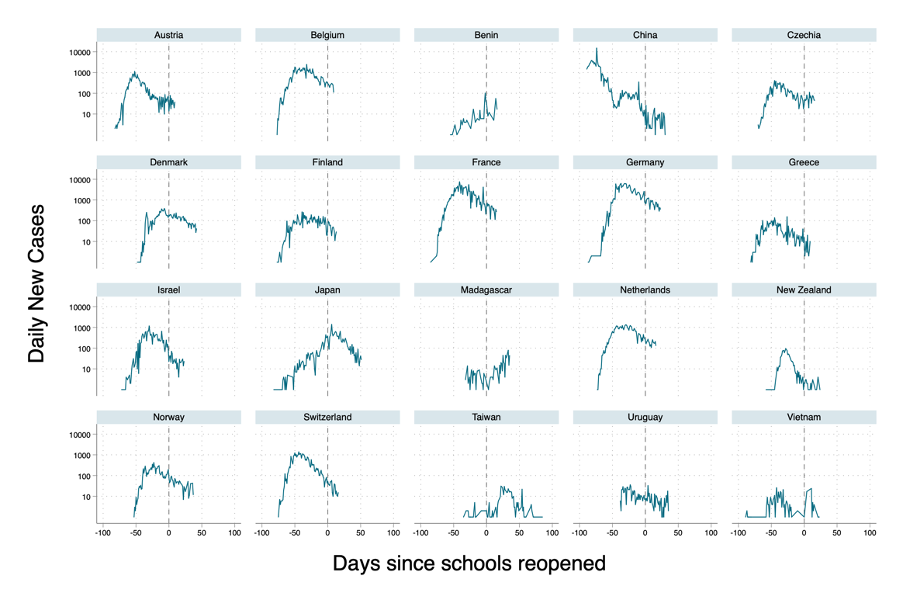 The next batch of countries to reopen schools may look different than the first batch. Part of the United Kingdom (England) and South Africa will reopen on Monday. Pakistan and Indonesia currently plan to reopen in July. The United Kingdom has more daily infections than other countries did when they reopened and has not yet properly established a test and trace system, but it is about 25 days past its peak and is sloping downward. South Africa has a large number of new daily cases and, unlike most countries which have reopened, appears to be well before its peak. Pakistan and Indonesia are both still on an upward trend, although it appears to be flattening. Time will tell whether these moves are premature or not. 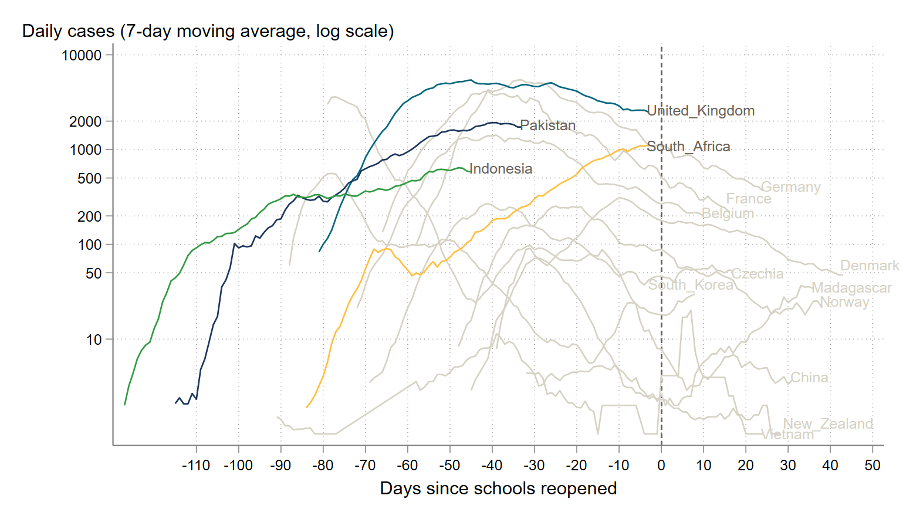 Note: Time is measured in days since schools reopened. Lines show a 7-day moving average of daily cases starting 9 days prior to when schools closed.

School closures and reopenings happen in tandem with other policy changes (see figure 4). And inferences about the effect of reopening schools on COVID-19 cases cannot be made from this data without considering, for example, whether the counterfactual might have been an even faster decline in cases if schools had remained closed. (See below for more on difference-in-differences approaches.)

Figure 4. School closures (and reopenings) are often bundled with other policy changes 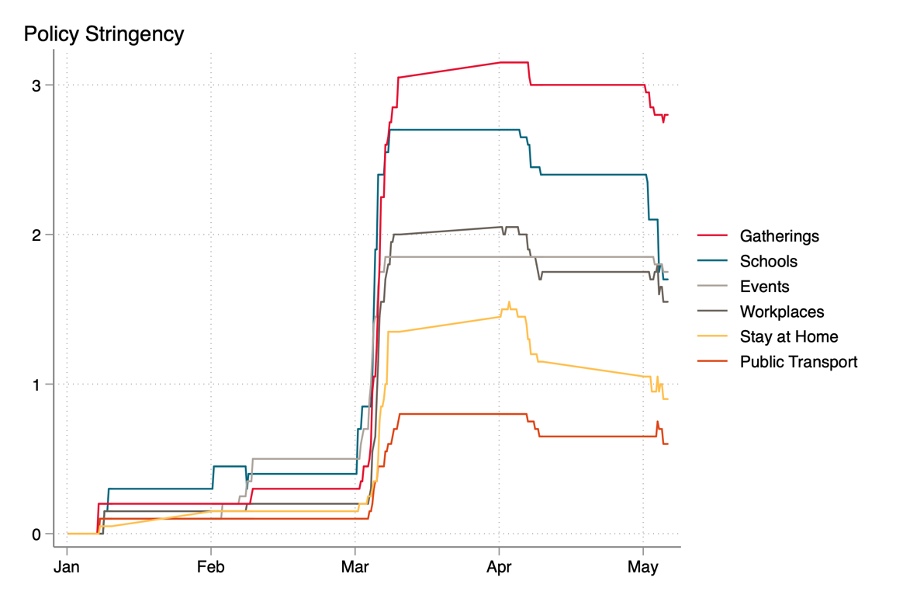 Source: Authors’ calculations based on data from Hale et al (2020)

Note: The sample includes only the 20 countries shown in Figures 1-3 which have already reopened schools. .

Eventually, more sophisticated difference-in-difference studies comparing countries or sub-national districts that have and have not reopened schools may be able to provide a clearer picture of causal effects, by constructing a plausible counterfactual. But even these studies will face a range of challenges, for instance those outlined by Goodman-Bacon and Marcus:

Some early difference-in-difference estimates for the effect of stay-at-home orders, for example Dave et al., suggest the orders do matter, though they don’t focus specifically on school closures. And, of course, the effect of introducing and withdrawing restrictions may not be symmetric if, for example, people are shocked into drastic behaviour changes which then become sticky.

We’ll have to wait and see, but in the meantime, countries that have already reopened schools don’t show a huge trend break in new cases—though we note again that those countries may have been better prepared than some which are about to reopen now, such as South Africa.

For more on school reopening, read our latest report.