The COVID-19 pandemic has pushed 120 million people across the globe into extreme poverty, and the limited data available thus far suggests that the wealth of extremely rich individuals has risen at the same time. This implies that income inequality within many countries is increasing, including low-income and emerging market ones. While one would need to await official data to confirm the evolving income distribution in these countries, this trend is likely to have far- reaching implications for political stability in many countries, if validated. A recent United Nations Development Programme report emphasizes the role of economic factors, including economic inequalities, as a key factor driving the phenomenon of extremism in some parts of the world.

In this blog post, we provide new evidence that in addition to its human cost, terrorism can have important consequences for public budgets. Most of the costs of terrorism—like loss of life and political upheaval—are well-known, but the macroeconomic and fiscal impacts are less well understood. Terrorism can suppress economic activity, reduce government revenue, and cause government finances to be redirected away from social spending to the military, all of which can exacerbate the inequalities that COVID has deepened. In this light, we argue that fiscal policies that build social cohesion—addressing what may be the underlying drivers of extremism—will be helpful in both addressing inequality and reducing the fiscal risks posed by terrorism.

Terrorism and its economic impact

Across the world, the frequency of terrorist attacks has risen from 619 in 1970 to 9,060 in 2018, increasing the number of terror-related fatalities from 166 to 22,255 per annum over the same time period, according to the Global Terrorism Database. The concentration of attacks and fatalities in the Middle East and Africa regions is evident from the data plotted in Figures 1 and 2. In addition to the grievous human toll, terrorism generates sizeable economic costs. An immediate consequence of the negative effect terrorism has on economic activity is the deterioration of public finances.

There are three main ways in which terrorism can affect fiscal outcomes. First, it influences real economic activity, which in turn has consequences for government revenues, fiscal deficits, and public debt. The direct effects of loss of life and the destruction of physical infrastructure due to violence and the indirect effects on trade, tourism, and business confidence all adversely affect growth. Second, terrorism negatively affects both the tax base and the efficiency of tax administration. Tax receipts, for example, vary with the health of the economy. Economic downturns due to insecurity and violence can lead to a decline in tax revenues. Beyond their effects on real activity, terrorism can destroy part of the tax base (e.g., through the destruction of business firms) and weaken the efficiency of tax administration. Third, terrorism affects the composition of government spending. Military expenditures typically increase in response to conflict and terrorism and tend to remain high even after the cessation of violence. The increased spending on defense compresses the amount available for other areas such as education, health, and productive public investment. The beneficial effects of defense spending on the nondefense sectors of the economy are likely to be small in developing conflict-affected countries since a large proportion of defense spending tends to be on imported armaments.

Figure 1. Fatalities due to terrorism across the world, 2018 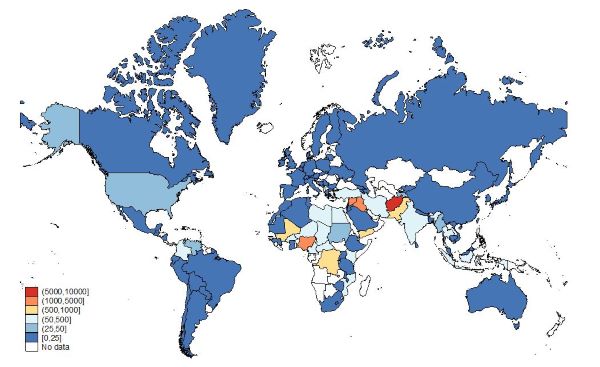 Figure 2. Terror attacks across the world, 2018 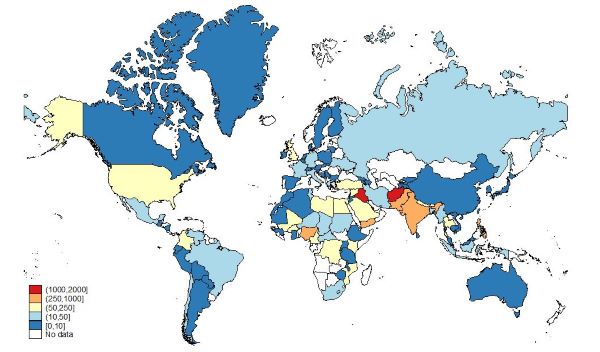 Modeling the fiscal impact of terrorism

In a forthcoming paper appearing in a Cambridge University Handbook on Terrorism, we modeled the short-to-medium term impact of terrorist activity on the budget and key economic variables. We used two proxies for terrorism. In the first, we used the International Country Risk Guide rating available for many countries, which provides an indicator for the violence in a country arising from civil war, terrorism, and civil disorder, and the actual or potential impact on governance. Second, we took the number of terror-related fatalities from the Global Terrorism Database when deaths during the year were above or equal to 1,000 people. We collected data for 191 countries between 1970 and 2018, of which 39 are advanced economies, 93 are emerging markets, and 59 are low-income. 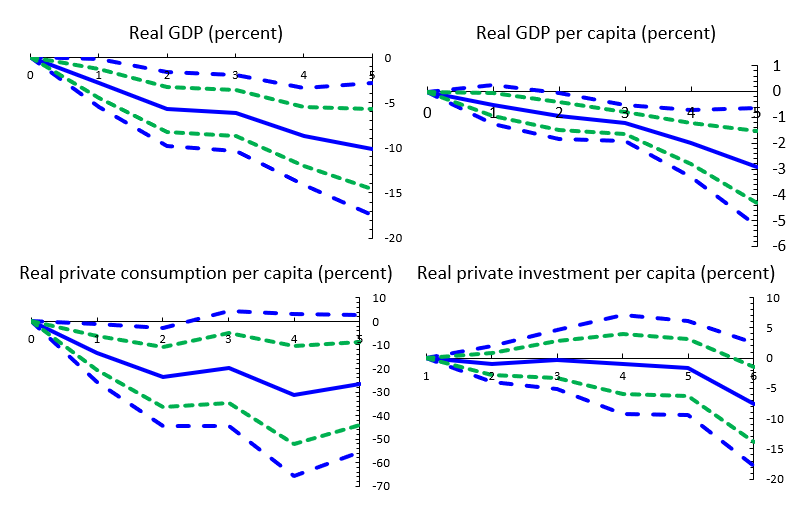 Note: This figure depicts the percentage effect of a terror shock on the macroeconomic variables indicated, estimated based on a large heterogeneous sample from 1970–2018 using the local projections method of Jordà, American Economic Review (2005). x-axis in years; t=0 is the year of the terror shock. Solid blue lines denote the response to a terror shock, blue dashed lines denote 90 percent confidence bands and green dashed lines denote 68 percent confidence bands, based on standard errors clustered at country level.

In the very short-run (1-2 years after the shock), government debt rises by 5 percentage points of GDP (top left, figure 4). We also found that revenues go down by as much as 25 percent after 2 years, while expenditures fall by less than half that amount (top right and bottom left, figure 4). Military spending increases but tapers off after the third year (bottom right, figure 4). 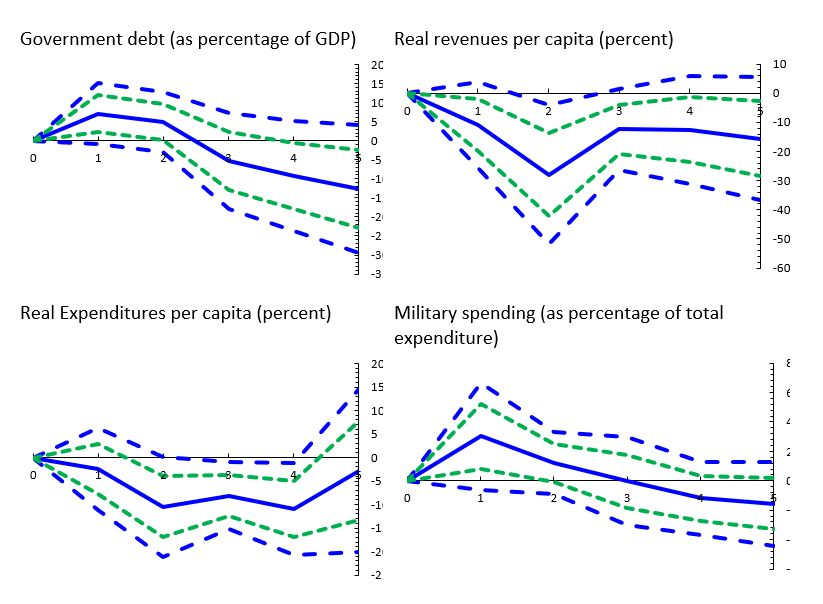 Note: This figure depicts the percentage effect of a terror shock on the macroeconomic variables indicated, estimated based on a large heterogeneous sample from 1970–2018 using the local projections method of Jordà, American Economic Review (2005). x-axis in years; t=0 is the year of the terror shock. Solid blue lines denote the response to a terror shock, blue dashed lines denote 90 percent confidence bands and green dashed lines denote 68 percent confidence bands, based on standard errors clustered at country level.

When we disaggregated countries by income level, we found that public finances in low-income countries are relatively more vulnerable to acts of terrorism than those in emerging market economics that are richer and more diversified. Moreover, after excluding fossil fuel producers the negative fiscal consequences of terrorism on revenues and expenditures are even greater in the remaining low-income countries. This is because the tax base of the latter countries is relatively narrow and is critically affected by terrorist acts. We find that terrorism appears to have a more salient effect during economic downturns than during periods of high growth.

What lessons can policymakers draw from this research?

The advent of COVID-19 has increased poverty and most likely worsened income distribution in several low-income and emerging economies. This could result in increased extremism and greater risks of terrorism. We have shown that, beyond the immediate human and political effects, terrorism has large and negative effects on public finances. Because terrorism reduces economic activity and tax revenues, it could thwart countries’ efforts to address the inequalities that have been exacerbated by the pandemic. To help build social cohesion and reduce the risks of terrorism, countries should allocate resources to programs that benefit the poor as their economies recover. This includes allocations for education and health as well as direct income transfers. Pro-poor spending can be part of a smart fiscal policy that builds social cohesion, reduces the risks of terrorism, and lays the foundation for inclusive growth. This would need to be accompanied by inclusive governance, steps to increase social trust, and curtailment of repressive state security.

Benedict Clements is a Professor at the Universidad de las Américas en Ecuador.

João Tovar Jalles is an Assistant Professor at the University of Lisbon.

Saida Khamidova is an independent researcher.