This year’s Nobel Peace Prize, awarded last week to Denis Mukwege and Nadia Murad, calls attention to sexual violence during war and civil conflicts—a horror too often unstated and wished away. There’s another largely hidden horror the world needs to reckon with: the toll that civil conflicts, some so local that they rarely make the news, takes on children.

During civil conflict, children may lose their parents or migrate with their families away from their source of livelihood. Education, food supplies, and health services may be disrupted, with lasting, if not lethal, impacts on children.

In a new CGD paper, “The Impact of Civil Conflict on Child Malnutrition and Mortality, Nigeria, 2002–2013,” we show that young children in Nigeria living close to a conflict zone are more likely to suffer acute malnutrition, and more so the greater the severity and duration of the child’s exposure to conflict. For example, children under age five in urban areas are 5 percent more likely to be acutely malnourished for every conflict death within a kilometer of their home. The effects are larger for rural children and are driven by results from the northern regions of Nigeria where Boko Haram is active. Figure 1 shows the location of conflicts in Nigeria in 2012 and their magnitude in terms of number of deaths. 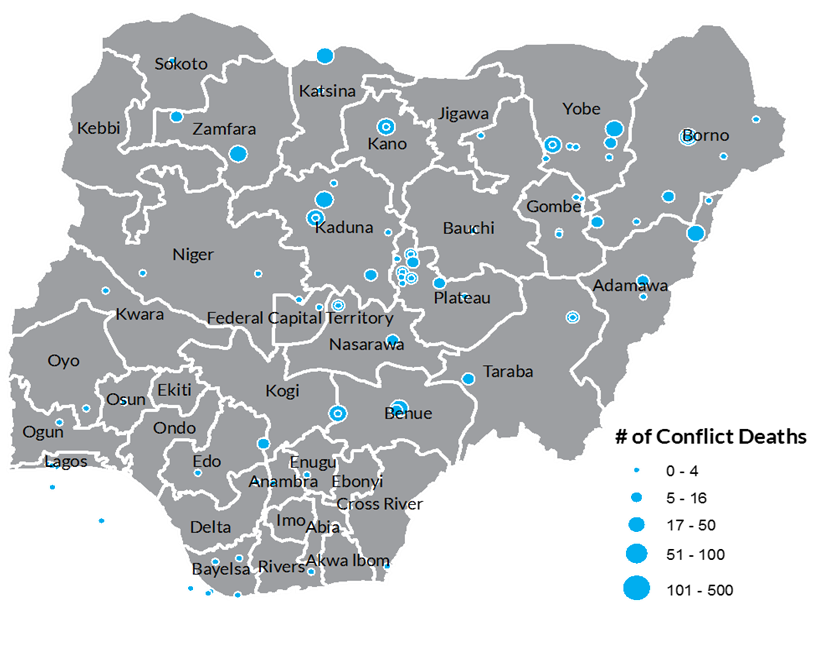 The Impact of Civil Conflict on Child Malnutrition and Mortality, Nigeria, 2002-2013 - Working Paper 494

Nigeria’s conflict with Boko Haram has made the headlines, but civil conflict is widespread. In 2016, 357 million children worldwide were living in a conflict zone. That finding helps illustrate the striking result, reported in a recent Lancet article, that the number of infant deaths associated with conflict was more than three times the total number of deaths for combatants.

The hidden toll of war and conflict is huge—for women and for children. Meeting the Sustainable Development Goals to improve child health and nutrition depends not only on reducing conflict, but also on greater efforts to target critical services to mothers and children affected by conflict. Otherwise, it is the innocent bystanders who will continue to bear the brunt of conflict—including from the thousands of low-level conflicts that don’t make the headlines.