Why Do Some Donors Give More Aid to Poor Countries?

Donors vary considerably in how much they focus their spending on poorer countries. A histogram of aid to recipient countries by per capita GDP (2019 current USD) for each of the largest 10 donor countries demonstrates this (Figure 1). From the graph, ranked by a weighted average of GDP per capita of all donor recipients, the Netherlands targets its spending the most towards poor countries. On the other hand, Germany targets considerable spending towards middle income countries.

Figure 1. Where does DAC ODA go by recipient GDP per capita 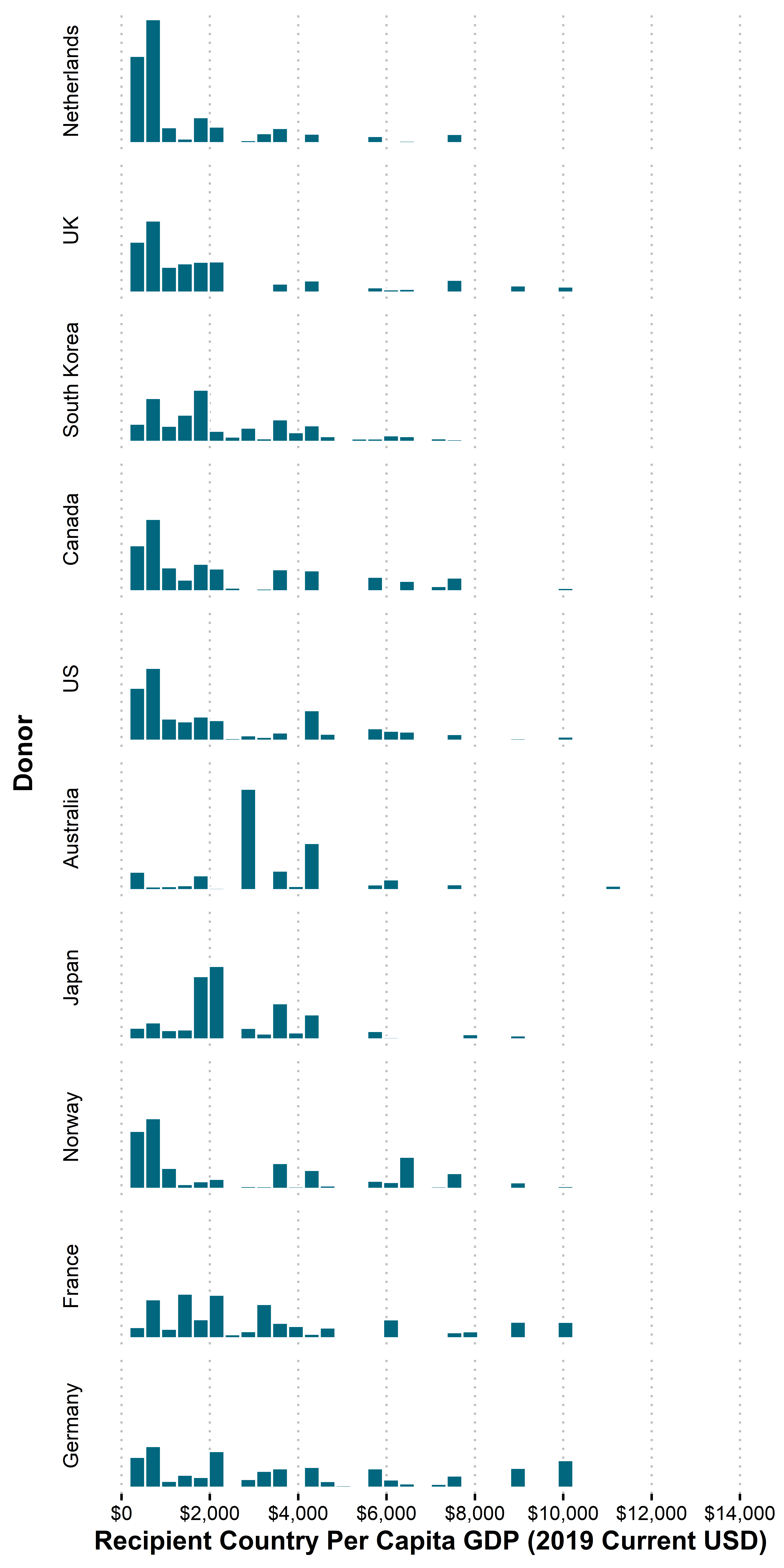 We Should Be Spending More of Available Aid in Poorer Countries, Not Less

There are good reasons to believe that the utility-maximizing allocation is focused heavily on the world’s poorest countries, where an extra dollar is likely to make the greatest difference to welfare.[1] However, donors may also allocate resources towards humanitarian causes: particularly seeing disadvantaged subgroups within countries including refugees fleeing violence or natural disasters as deserving particular attention. In addition, donors might believe their aid will achieve more in democratic or ‘well governed’ countries. Perhaps less legitimately, donors might prefer to allocate more aid to countries with closer political or economic ties: ex-colonies, allies, supporters in the UN, or trade partners. Similarly, they might choose to focus their aid on the ‘near abroad,’ as a tool of diplomacy or reflecting higher immediate self-interest. [2]

There is considerable literature examining actual donor aid allocation decisions that suggests all of the above factors can play a role.[3] This paper will not add new analytical rigor or technique but will use some of the indicators highlighted as significant by that literature to examine if they can help explain the patterns observed in Figure 1.

It is important to emphasize that this exercise (along with the rest of the literature) will suffer weaknesses that demand caution in interpretation including multicollinearity, nonlinearity, omitted variables and attenuation bias. As our variables are inexact measures of what donors (may) care about, some of what remains ‘unexplained’ in our regressions will be due to noisy data imprecisely reflecting the actual variable of interest.[4] And other influences on allocation practices, perhaps due to climate mitigation priorities or military engagement, for example, are excluded.

Aid data was obtained from the OECD CRS database for 2019 DAC ODA funding disbursed,[5] looking at bilateral ODA grants, loans, or equity investments (excluding donor administrative costs). We summed the grant equivalent spending by recipient and donor country, yielding a dataset of one observation per donor-recipient pair (as a robustness check, we perform the same analysis on an average of 2014-19 data).[6]

For our independent variables, we gathered data from the WDI (GDP per capita, Population, Refugee outflows and inflows), Worldwide Governance Indicators (a mean of all of the indicators within the WGI dataset, including Voice and Accountability, Political Stability and Violence, Government Effectiveness, Regulatory Quality, Rule of Law, and Control of Corruption), CEPII (bilateral distance between the capital cities of two countries, bilateral colony dummy), the Freedom House Democracy Dataset (overall score), and the World Integrated Trade Solution (WITS) (recipient country percent share of donor's exports). Note recent GDP per capita data excludes countries including South Sudan, Venezuela and Syria. See Annex Table 1 in the PDF version of this note for details.

We used as our dependent variable the proportion of total ODA channeled to a particular recipient (e.g. if Australia disburses 10 percent of ODA to Tanzania, then our dependent variable value is 0.1). We regressed this on log GDP (current USD) per capita, log population, log bilateral distance, recipient refugee outflows per capita, recipient refugee inflows per capita, recipient total Freedom House democracy score, bilateral colony dummy, bilateral exports, and recipient Worldwide Governance Indicator. In addition to performing individual regressions for each donor country, we also group the donor countries together and run regressions on the outcome of proportion of total ODA given by either (a) all DAC countries or (b) the top 10 largest donors.

Looking at DAC-total results, overall, 45 percent of variance remains unexplained.[7] The most important variables determining the magnitude of commitments or grant equivalents are population and GDP per capita (Annex Table 2, available in the PDF). Running the regression separately for the 10 largest donor countries,[8] we find that around 55 percent of the variance is left unexplained in the average regression (Annex Table 2 in the PDF).[9]

Running regressions on subsets of variables, we examine how much of aid allocation can be correlated with recipient need (GDP per capita, population), recipient and humanitarian need (adding refugee inflows and outflows), recipient and humanitarian need as well as ‘capacity’ (adding democracy and governance scores) and then finally adding the rest of the variables, regarding donor ties (distance, trade, colonial history). Figure 2 contains the results, as well as some robustness tests, explained later.

Figure 2. R-Squared of OLS on proportion of ODA 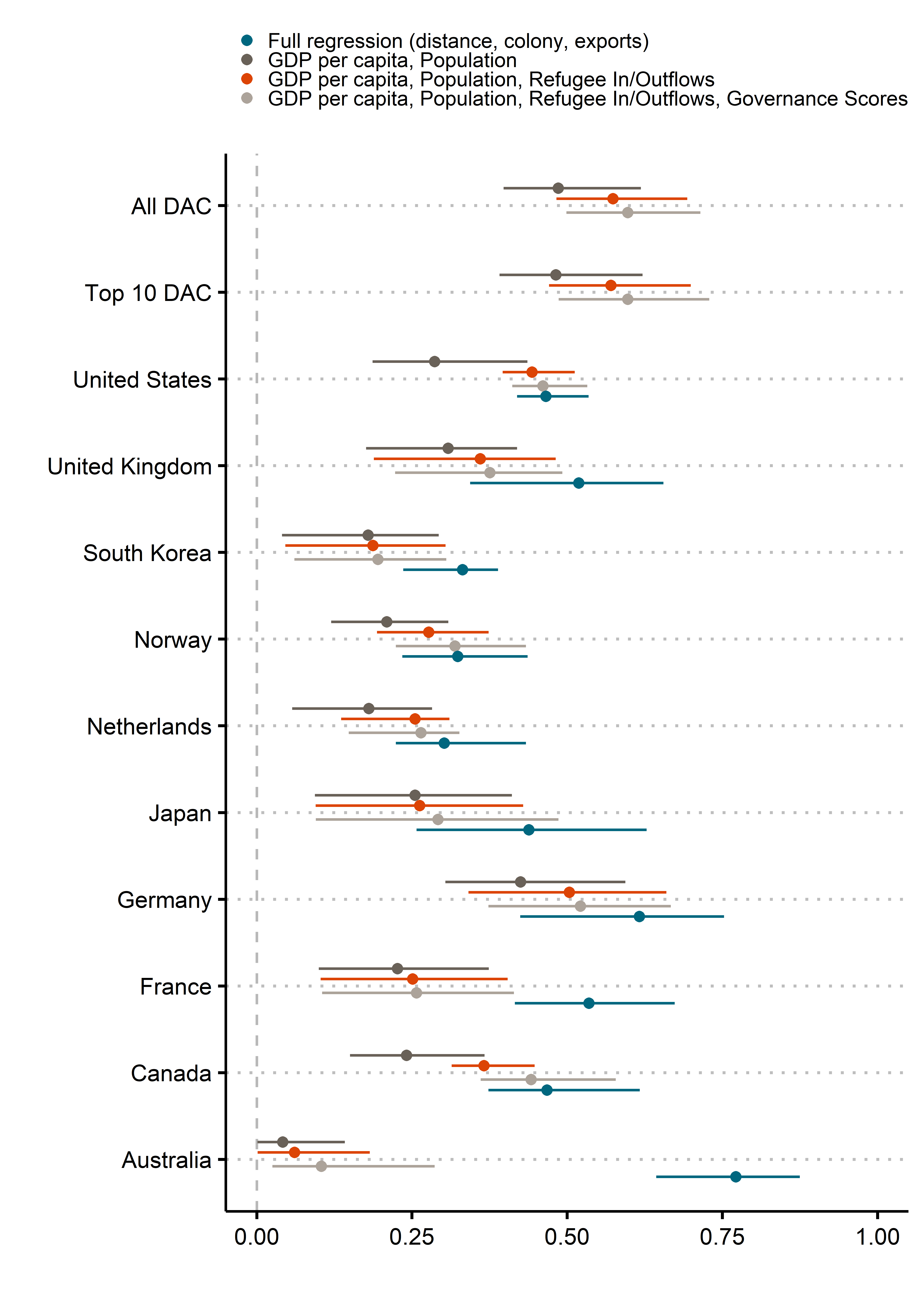 Note: Each interval shows the minimum, maximum, and mean R-squared values from all OLS regressions (zeros excluded, zeros included, logged outcome) across all years (2014-2019 or 2019 only) and all outcome variables (grant equivalent spending, commitments). Logistic and Poisson pseudo-R-squared values were excluded. For Australia, the main driver of the jump in variance explained in the full regression was the distance variable, which was significant and negative across all regression specifications.

Figure 2 shows the greatest jump in R-squared comes from accounting for need. After that, the largest jump in R -squared comes with the addition of donor ties. For the United Kingdom, South Korea, Japan, France, and Australia, donor ties appear to play a large role. On the other hand, the U.S. and Canada’s focus on humanitarian concerns can be seen from the jump in R-squared when refugee inflows and outflows are added. Norway, Netherlands, and Germany appear to be motivated by all three of need (GDP per capita and population), humanitarian concerns (refugees) and donor ties (distance, colony, exports).

In Annex Table 3 (see PDF) we run regressions using the absolute number of poor under the $1.90 and $3.80 threshold in place of population and income.[10] This produces similar results (population in poverty is positively and significantly associated with aid flows). All coefficients come in with the same sign, but refugee outflows per capita and Freedom House democracy score is not significant in the $3.8 poverty headcount regression, and the Worldwide Governance Indicators are not significant in the GDP per capita regression.

To test robustness of results to a (somewhat) longer timeframe, we ran OLS regressions using the average of 2014 to 2019 data in place of 2019 data. We also substituted commitments for grant equivalent disbursements. To test for non-linearities, we logged the outcome variable. To account for many donor-recipient pairs reporting zero ODA, we ran Poisson regressions on 2019 non-negative data for the outcome variable,[11] as well as a logistic regression on whether a country decided to give money to a recipient country. In short, the two variables that were most resistant to any regression specification were population and GDP per capita. The indicators for governance and for refugees did sometimes change. The R squared for the various OLS regressions are summarized in the intervals of Figure 2. We also examined whether adding a variable which measured the share of the recipient country in other donors' ODA contributions was significant in the individual country regressions for the top 10 donor countries. This share was positive and significant for Canada, Germany, UK, Netherlands, and Norway.[12] This suggests, if anything, a narrative of ‘donor darlings’ rather than that donors are coordinating to concentrate their individual bilateral aid in few countries while ensuring more equitable ODA allocation as a whole across all recipient countries.

For the all-DAC regression for years 2014-2019, with both logged and not-logged outcome variables, using commitments instead of grant equivalent disbursements does not change the signs of coefficients, except the Worldwide Governance Indicators, which now is positive instead of negative (still not significant though) in the 2014-19 log OLS regression. Using logged outcomes overall causes the variance explained to increase (an R-squared of 71.5 percent in the All DAC regression for 2014-2019 versus 56.8 percent in the unlogged case), but the coefficients remain the same sign for the all-DAC 2014-2019 regressions on both grant equivalents and commitments. Similarly, the all-DAC Poisson regressions have similar signs to the OLS.[13] With the 2019 Logistic regression, refugee inflows, world governance indicators, and Freedom House democracy scores swap signs compared to the 2019 OLS regression, and are now negative, positive, and negative respectively, but not significant.

Most differences in global aid allocation cannot be explained using our measures of need, humanitarian demand, capacity and donor relations in a simple linear regression model. This may suggest considerable role for choice and political expediency in aid allocation decisions. After need, across countries, donor ties appear the second strongest detectable motivation for directing aid, but some countries do appear to be more motivated by humanitarian demand, including the US and Canada.

Were aid focused with greater precision on the world’s poorest countries, there is considerable reason to think it would have a larger impact on global quality of life.[14] That this is such a comparatively minor factor in revealed allocation decisions is therefore disappointing.

Many thanks to Ranil Dissayanake for very helpful comments.

[2] Donors might believe their aid will be more effective given these ties or proximities. We have not seen empirical evidence suggesting this. Chiba and Heinrich suggest the colonial bias is accounted for by the greater saliency that donors give to policy concessions from former colonies. Chiba, D., & Heinrich, T. (2019). Colonial legacy and foreign aid: decomposing the colonial bias. International Interactions, 45(3), 474-499.

[4] Note one concern that may not be substantive: Hoeffler and Outram (2008) discuss the problem and literature around the fact that the aid variable is zero for a large number of donor-recipient pairs, and conclude that it does not lead to significant bias. Hoeffler, Anke, and Verity Outram. "Need, merit, or self‐interest—what determines the allocation of aid?." Review of Development Economics 15.2 (2011): 237-250).

[9] We ran an OLS regressions with all variables on 2019 grant equivalent spending for each of the top 10 donor countries. Then, we took the complement of an unweighted average of the R2 on each regression.

[10] Data are from PovcalNet. However, 47% of ODA flows to countries that do not have an estimate for poverty numbers since 2015.

[12] An additional confounder, however, is that GDP and population often are no longer significant in these regressions, indicating collinearity.