China has emerged as a leading participant in multilateral development organizations. In many ways, this is a welcome development. Today’s global challenges, including COVID-19 and climate change, require an international response and have prompted renewed calls for increased multilateral engagement by the major economy countries. This, combined with the recognition of multilateral institutions’ high standards for transparency and environmental safeguards, have led the United States at times to encourage China to step up its multilateral contributions. At the same time, countervailing voices focused on strategic competition increasingly view China’s multilateral participation with skepticism.

When the People’s Republic of China joined the World Bank in 1980, it was allocated 12,000 International Bank for Reconstruction and Development (IBRD) shares, becoming the Bank’s sixth largest shareholder with 3.47 percent of the of the voting power. By 2013, decades of rapid economic growth had propelled China to its current position as the IBRD’s third largest shareholder, eclipsing France, Germany, and the United Kingdom with 5.03 percent of IBRD voting power.

In many ways, China’s rise in stature at the IBRD mirrors its growth in influence across the multilateral development system. This is certainly true of China’s increasing voting share in the World Bank, IMF, and UN system, all of which tie financial contributions to economic size (see Figure 1). But China’s growing importance in the multilateral system is also the product of distinct policy choices made by the Chinese government. These policy choices go beyond the wealth-based financial contributions that dictate IBRD shareholding to include voluntary financing, borrowing, and commercial contracting. In concert, they make China a unique player in the multilateral system by virtue of to its simultaneous roles as a multilateral organization donor, shareholder, aid recipient, and commercial partner.

Figure 1. China has more than quadrupled its discretionary contributions to multilateral development institutions and funds over the last decade

* Because of the varying schedule of replenishments and/or varying data availability, data for 2010-2012 (2019-2021) reflect the earliest (latest) available data for each underlying institution within the given range. Vertical funds reflect the earliest contribution to each fund (CGIAR, and GFTATM, GEF) within the 2010-2012 range. For the later dates, the range extends from 2015 to 2021 in order to capture one-time contributions to the GIF (2015) and We-Fi (2017). China’s contributions to Gavi, which began in 2016, factor into the second period but not the first.

Fundamentally, China’s evolving role in the multilateral space requires us to reexamine the metrics we use to evaluate scale and scope of its participation. This analysis seeks to address that gap. By collecting and collating financial, procurement, voting, and other data provided by the major development-focused multilateral institutions and funds, we have sought to provide a clear, cross-institutional, comparative picture of China’s role in multilateral development organizations and the evolution of that role over the past decade.

International financial institutions (IFIs) provide financial and technical assistance for development in low- and middle-income countries. China’s influence in the IFIs—primarily MDBs and regional development banks (RDBs) —has grown considerably over the past decade. China now has the second-highest aggregate voting power in the IFIs it supports, though it lags considerably behind the United States (see Figure 2). The biggest growth in China’s voting power over the last decade has been in the IBRD and the International Finance Corporation (IFC), both entities of the World Bank Group, as well as in regional development banks in Africa and Latin America (Table 1). The launch of Asian Infrastructure Investment Bank (AIIB) and New Development Bank (NDB) within the last five years—both with sizeable capital and in both of which China is the largest (or co-largest) shareholder—also contributes to China’s growing influence in the broader multilateral system.

Figure 2. China has the second-highest aggregate voting power in the IFIs it supports*

Table 1. China’s voting share/rank has increased over the past decade across nearly all IFIs*

Some of China’s increased voting power in the IFI system reflects China’s economic growth; shareholding in the IBRD and IFC are directly linked to economic size. However, China’s gains in voting share in some of the RDBs are the result of active efforts and discretionary share purchases on the part of the Chinese government. Large shareholders in IFIs generally possess influence in molding institutional agendas and have vested interests in ensuring activities are well managed and well resourced.

Unlike shareholding, contributions to development bank concessional financing windows (resources set aside to allocate to countries at more favorable interest rates and repayment schedules) are entirely discretionary. China has increased its support of these windows over the last decade, particularly for the World Bank’s IDA (Figures 3 and 4). Voting power within these entities is more limited than it is for MDB shareholding, but IDA contributions do factor into the formula for IBRD voting power.

Figure 3 & Figure 4. China's voluntary contributions to AfDF, ADF, and IDA replenishments have grown between 2010 and 2020; U.S. contributions have shrunk

In addition to institution-wide fundraising exercises through capital subscriptions (for the MDBs) and periodic replenishments (for concessional financing windows), China also contributes to a number of special purpose funds associated with the banks that complement the institutions’ core funding. Worth particular mention are two $2 billion China-led funds associated with the Inter-American Development Bank (IDB) and African Development Bank (AfDB). These large funds can help increase China’s financing and influence where shareholding and voting power is limited by a region-based formula. For example, China contributes just $50 million (one percent) of the AfDB’s $5 billion in paid in capital.

Chinese firms outperform firms from other countries in securing MDB contracts for goods, works, and services (Table 2). In 2019 alone, Chinese firms won contracts from the IBRD, IDA, AfDB, IDB, ADB, and EBRD worth $ 7.4 billion (14 percent of total contracts by value). This reflects institutional rules that favor the lowest bids for procurement contracts. It also reflects the heavy presence of Chinese firms in infrastructure sectors, which account for the largest value contracts at the MDBs. Though findings of corrupt practices arise in a very small share of MDB contracts, resulting the debarment of implicated firms, Chinese firms account for a significant share of such debarments. Still, our analysis also suggests that through participation in MDB contracts, China’s firms operate under a highly transparent, rules-based system.

Table 2. China has consistently ranked among the top countries awarded contracts by IFIs

+Indicates that no contracts were awarded to Chinese firms by the respective MDB during this year.

China is a top contributor to the UN’s development focused entities,[1] but this largely reflects its level of assessed contributions, which are based on economic size (Figure 5). For voluntary contributions, China ranks 22nd. 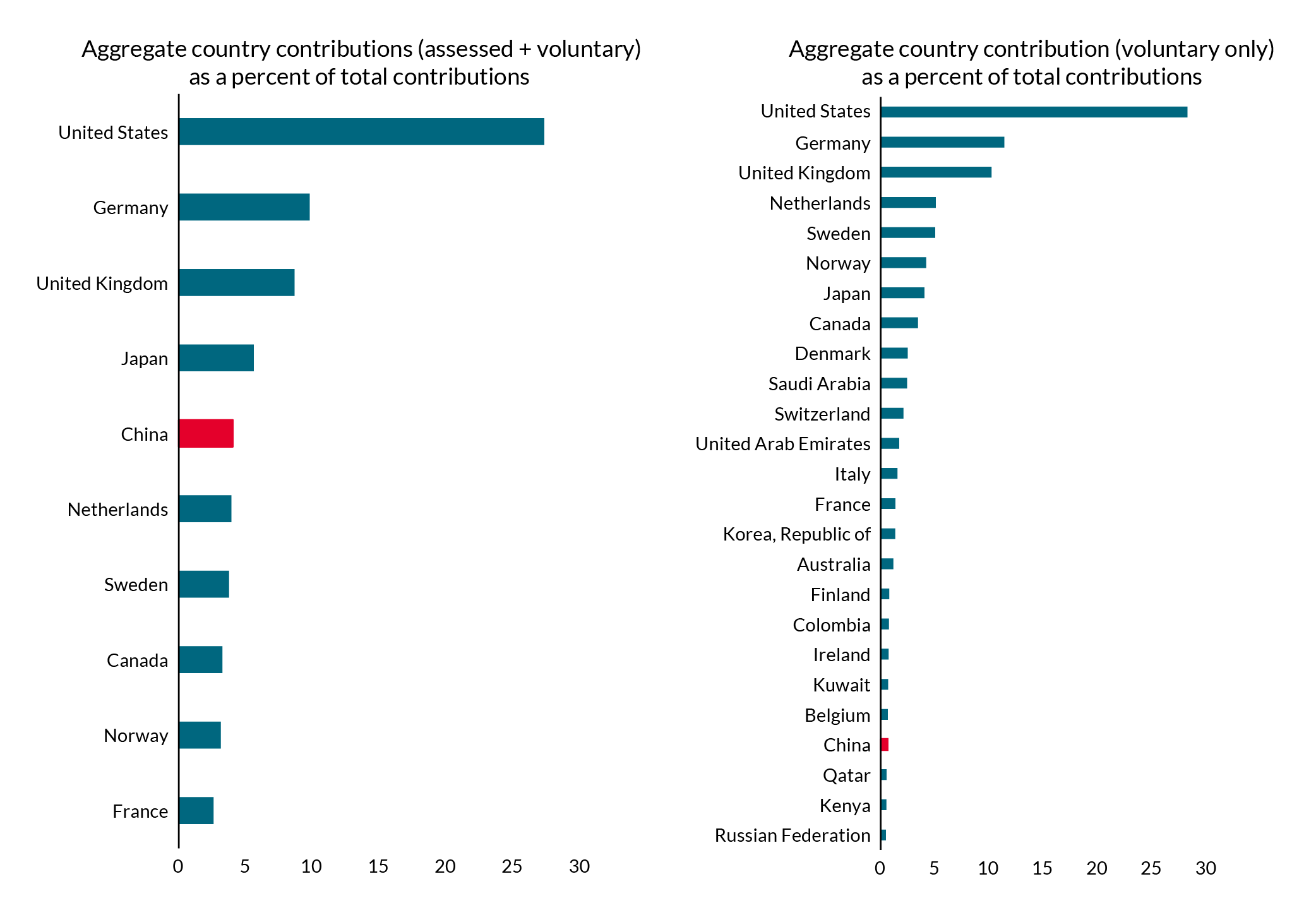 Figure 6. China is a top donor to WHO, UNESCO, FAO, IFAD, ILO, UNIDO, and ITU, but its largest voluntary contributions are to IFAD, WFP, and UNDP (2019)

China’s voluntary funding of UN development-focused entities increased by 250% between 2010 and 2019. Particularly notable are the increases in China’s contributions to IFAD and WFP (Figure 7). This reflects Chinese policymakers’ recent focus on food and agriculture sectors’ role in development.

Figure 7. China increased its voluntary UN contributions, almost across the board but notably to agriculture-oriented entities

In addition to contributing to established UN entities, China also established, in 2016, the UN Peace and Development Trust Fund (UNPDF) with a commitment of $200 million over 10 years to advance peace and development objectives. As of 2020, China has put $100 million toward the fund.

Table 3. China contributes to just six vertical funds and is a top donor for only one

That said, China’s contributions to vertical funds have doubled over the past decade, with the biggest increase going to Gavi, the Vaccine Alliance (see Figure 8).

Figure 8. China’s contributions to vertical funds have grown since 2010 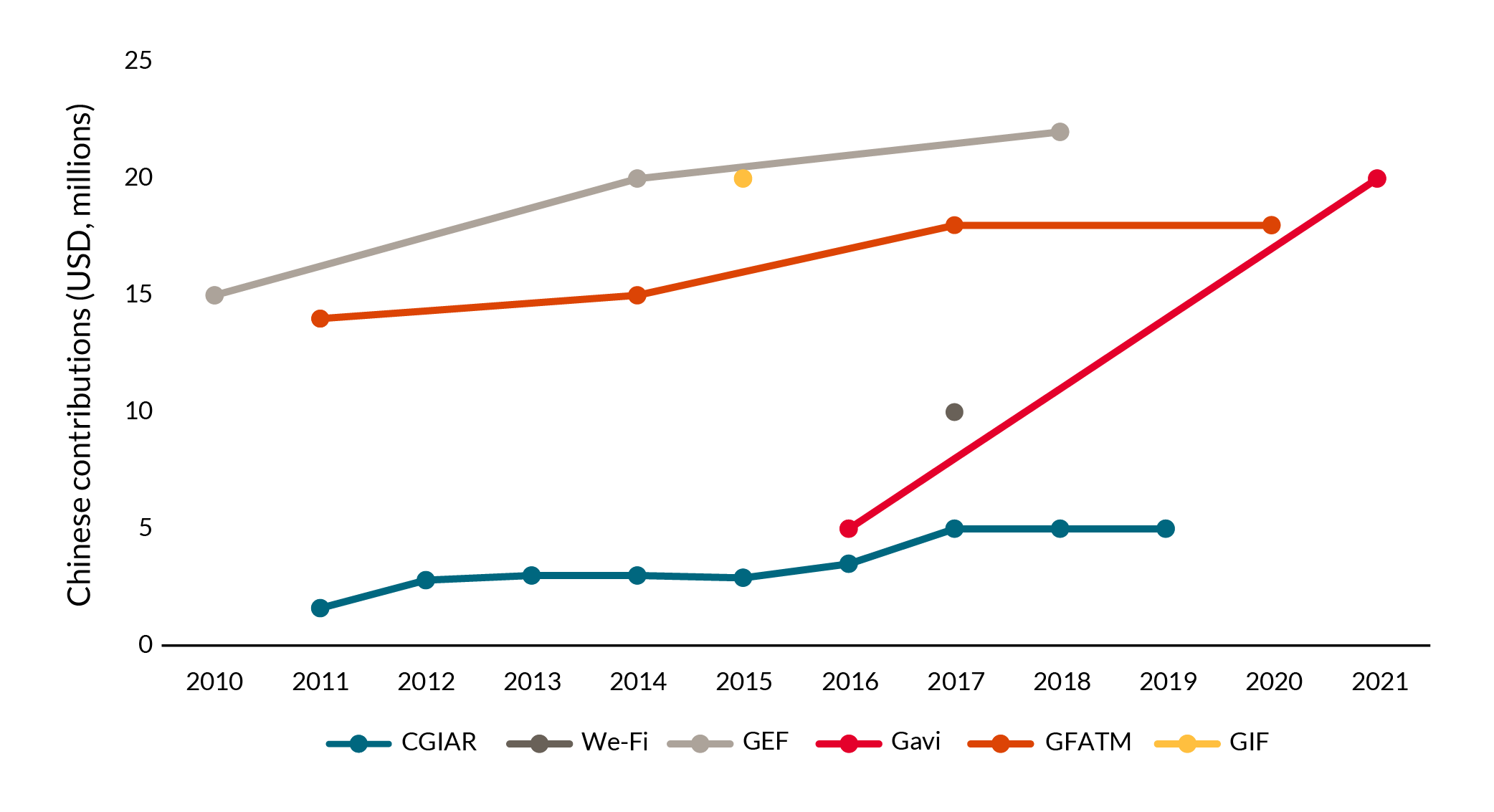 When it comes to global development efforts, strategic competition now defines the stance between China and the United States, and to a lesser degree between China and the G7 countries. This poses a dilemma when it comes to China’s role in multilateral development institutions. Western countries have long encouraged China to step up its role as a donor to multilateral institutions, premised on the belief that multilateral aid will be better spent in developing countries than bilateral assistance, particularly in China’s case. This rationale remains strong.

At the same time, there are growing fears that China’s large footprint in multilateral institutions gives it undue influence and advantage, given its singular position as a large shareholder, donor, client, and commercial partner. But acknowledging the reality of the unique position that China holds in the multilateral system doesn’t undermine the call for China to do more as a multilateral donor.

It may, however, point to the need for further scrutiny in some areas, particularly where China may obtain advantages over other countries and actors in ways that undermine development goals and multilateralism.

For example, although MDB procurement rules aim to promote transparent and open bidding, Chinese firms have come to dominate MDB commercial contracts to a degree that undercuts political support for these institutions in other countries. Of course, any procurement reform efforts should avoid becoming a discriminatory spoils system for the largest MDB donors. But reasonable efforts to temper China’s dominant position could include broadening the measures of bid quality beyond price has been a recent innovation which deserves more consideration, as well as greater efforts to promote procurement opportunities, particularly in developing countries themselves.

Another area of scrutiny pertains to the rules and norms of multilateral development institutions as they apply to China’s bilateral behavior. For example, the IMF, World Bank, and UNDP together play a leading role in working with developing countries to ensure access to finance that is sustainable, transparent, and offered on terms that are appropriate to each country’s circumstances. In cases of debt distress, these multilateral actors seek to guide commercial and bilateral creditors toward cooperative approaches to timely resolution. Today, the Chinese government factors prominently as a leading bilateral and quasi-commercial creditor in many cases of debt distress. Yet, China’s record when it comes to cooperation with multilateral resolution efforts is mixed. The multilateral institutions themselves have been measured in criticizing any of their member governments when it comes to their roles as bilateral creditors.

In general, the United States and other allied governments shouldn’t be alarmed by China’s position in multilateral development institutions today, and they should continue to promote China’s role as a donor to these institutions. That said, they need not be indifferent to areas where China’s multilateral relationships are at odds with their interests. Procurement and debt sustainability are two examples that merit greater attention. In the spirit of multilateralism, these agendas should be addressed cooperatively, with reform targets that are non-discriminatory even as they seek to address concerns about China.

Governments should seek to promote China’s participation in multilateral institutions for the same reasons they themselves participate: the leading challenges facing the world today require cooperation more than competition. Whether the threat is climate change or a global pandemic, an effective response demands cooperation between China and other governments within multilateral institutions.

[2] Rank is among government donors only; private donors are excluded from the ranking.