Why the COVID Crisis Is Not Edtech’s Moment in Africa

With schools closed for hundreds of million students around the world, many have hoped that “edtech” can help keep children learning via internet, apps, and mobiles. A new database published by the “EdTech Hub” shows that though use of edtech products serving African countries has doubled in the last month, the total number of users is still very low, and most were viewers of one TV show. That, coupled with the fact that most firms come from just a few countries, suggests that edtech in Africa is far from maturity.

At last count, the EdTech Hub database profiled 168 companies, organisations, and initiatives in low- and middle-income countries. Though not limited to Africa, this is where the majority of organisations in the database are focused. The vast majority (160) have at least one African country as their target market. The database includes no organisations from China, which is the world’s largest edtech market. There is also little from India, home to the highest-valued edtech firm in the world (ByJu’s), and perhaps the most promising independently evaluated product out there (Education Initiative’s “Mindspark”).

Just 19 million out of over 450 million children in Africa are using edtech. Most of these “users” are watching TV.

Most of the products in the database are targeted primarily at teachers or adults—for example teacher training or record-keeping systems. Sixty-seven products are targeted primarily at children—and so could potentially be of use to those at home due to school closures. These products have a combined total of 19 million regular users, compare to the more than 450 million children aged 14 or younger in all countries in Africa (this total may be an underestimate as it assumes no user uses more than one product). The vast majority—17 million—of these “users” are viewers of a TV show, produced by Ubongo. The show broadcasts in 14 countries, and viewership data is from just 6 of these, implies the estimated number of viewers is a massive undercount. Just two products have over 1 million monthly users: Ubongo and Eneza, an SMS-based interactive learning app. Fourteen products had reached over 100,000 total users before the crisis started.

Users have doubled since schools closed, but from a small base

The average numbers of child users has increased by 97 percent since schools closed, but this still leaves a tiny fraction of children served by any product. The majority of entries to the EdTech Hub database had been made by March 2020, just before schools began to close around the world. I emailed the public email address listed in the database for the 63 firms that make student-focused products and had submitted by March, to ask if their user-base has increased since schools closed. This email received responses from 13 firms, including estimates for the two biggest firms: Ubongo had grown from 13 million to 16.9 million viewers, and Eneza from 580,000 to 1.2 million. Scaling up firms that didn’t respond by the same average 97 percent increase might lead to a new total of perhaps 28 million out of 450+ million children.

Ubongo is a kids’ TV show that is something like the East African version of Sesame Street. As well as having substantially more users than most products, Ubongo also stands apart in having some independent evidence of effectiveness. This includes two small RCTs in Tanzania and Rwanda, and a (much) larger observational study using 39,000 children from the Uwezo survey.

The second biggest product is an SMS-based learning app, Eneza, with over 1 million unique monthly users. Though it has passed something of a market test, there is yet to be any independent analysis of the effectiveness of Eneza at improving student learning.

Figure 1. Few firms had many users before the crisis 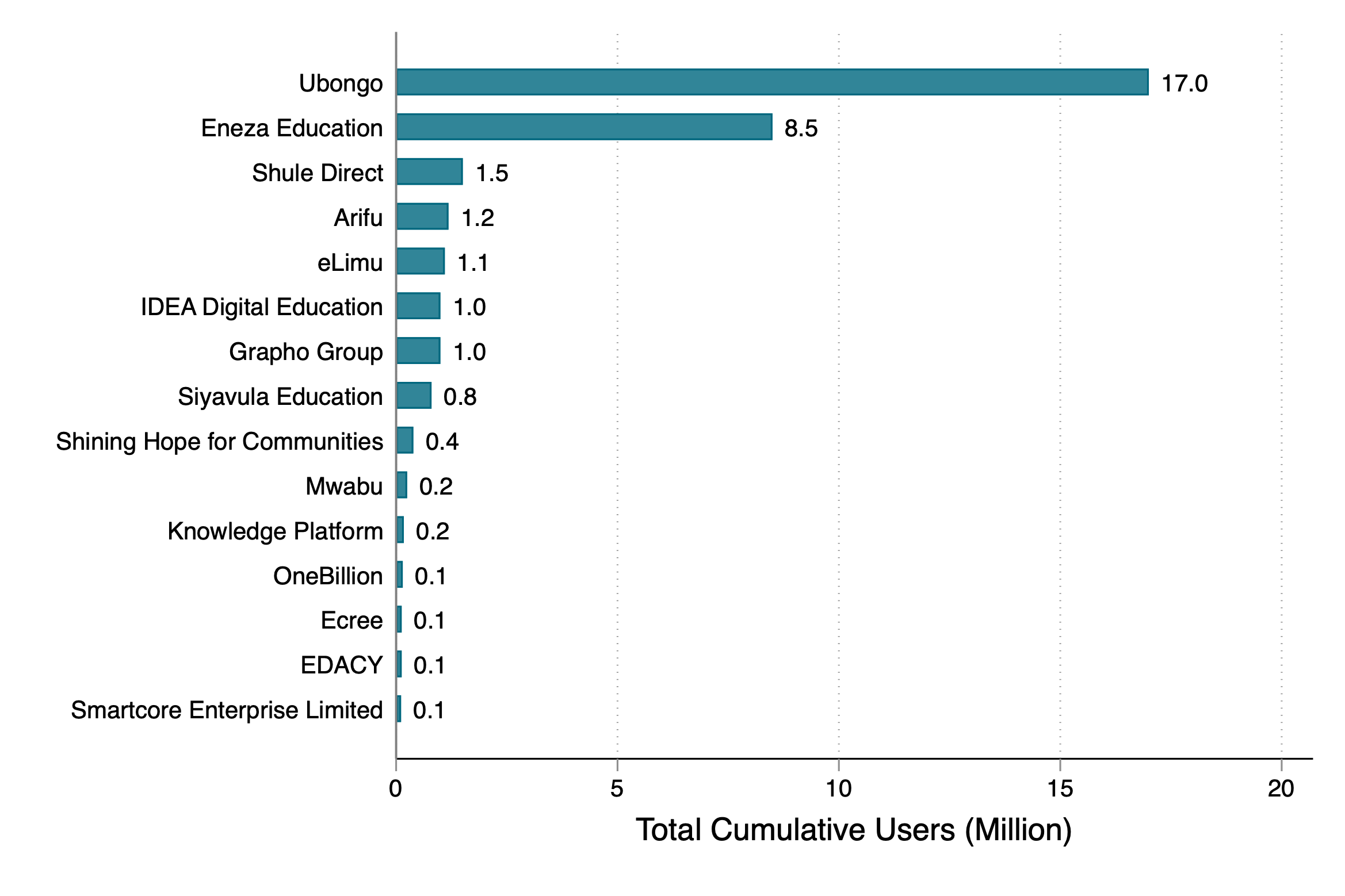 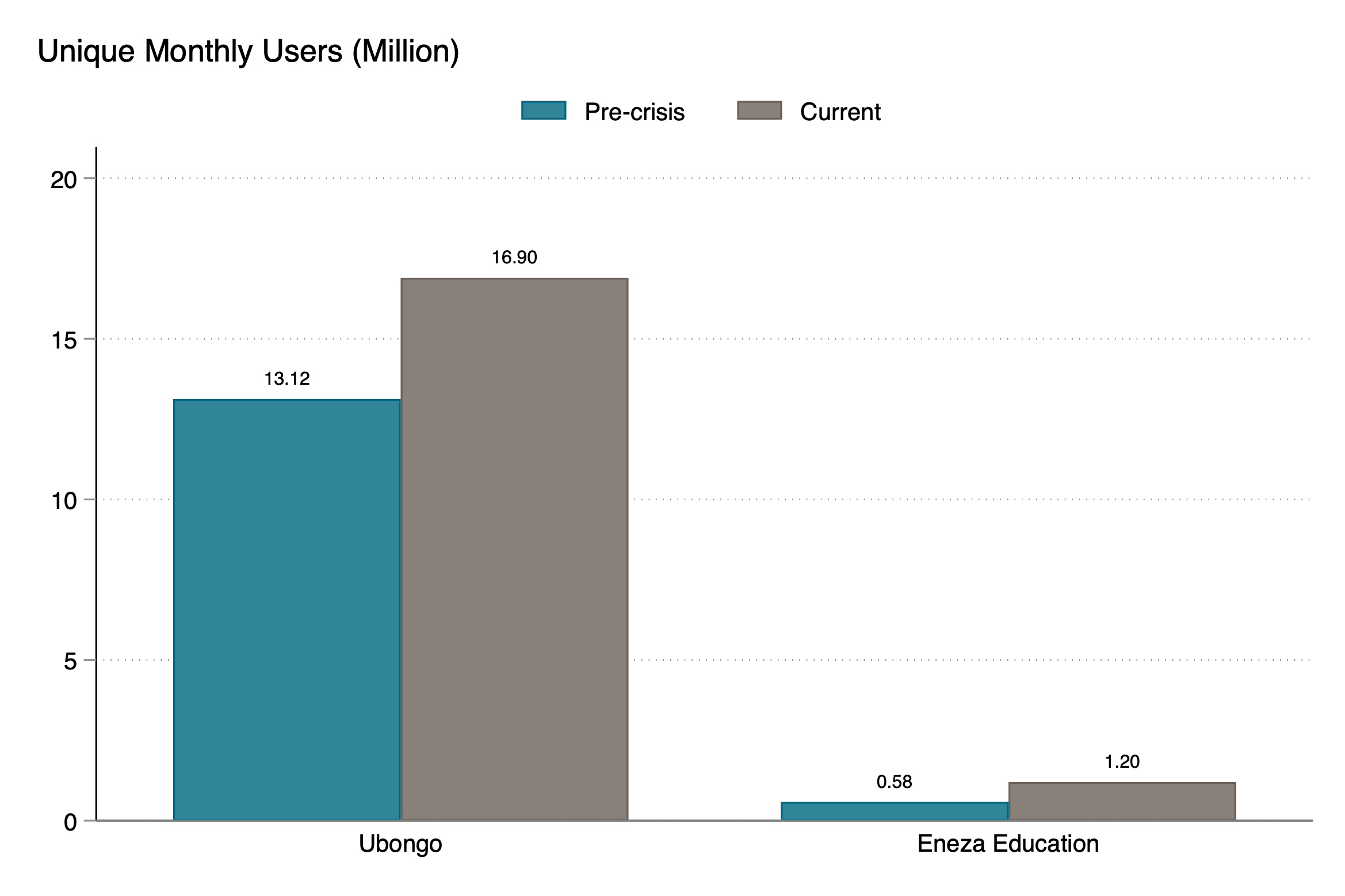 Over half of the firms in the database come from just three countries; South Africa, Kenya, and Nigeria. There is a clear gap in Francophone countries—with just one product from Togo, one from Mauritius, and one from Morocco. This likely reflects some under-counting by the database, but also less activity in Francophone countries. Regardless of where they are based, most organisations serve multiple national markets. But large countries are served disproportionately. There is clear theory and evidence linking innovation to market size. The bigger the potential profits, the more teams will attempt to create solutions, and as most attempts will fail, you need a lot of attempts: 83 percent of Silicon Valley tech firms started in 2000 had gone bust by 2009. In India, more than 90 percent go bust within their first 5 years. Take Tanzania: 1 of 9 products in the database has reached a large scale. Looking at the number of products available in each country, most large countries with over 10 million children are relatively well served with over 30 products to choose from. But this drops off rapidly, with most smaller countries having less than 10 products available. And this matters—half of the children in Africa live in countries of less than 5 million children.

Figure 2. Where edtech products used in African countries are being built 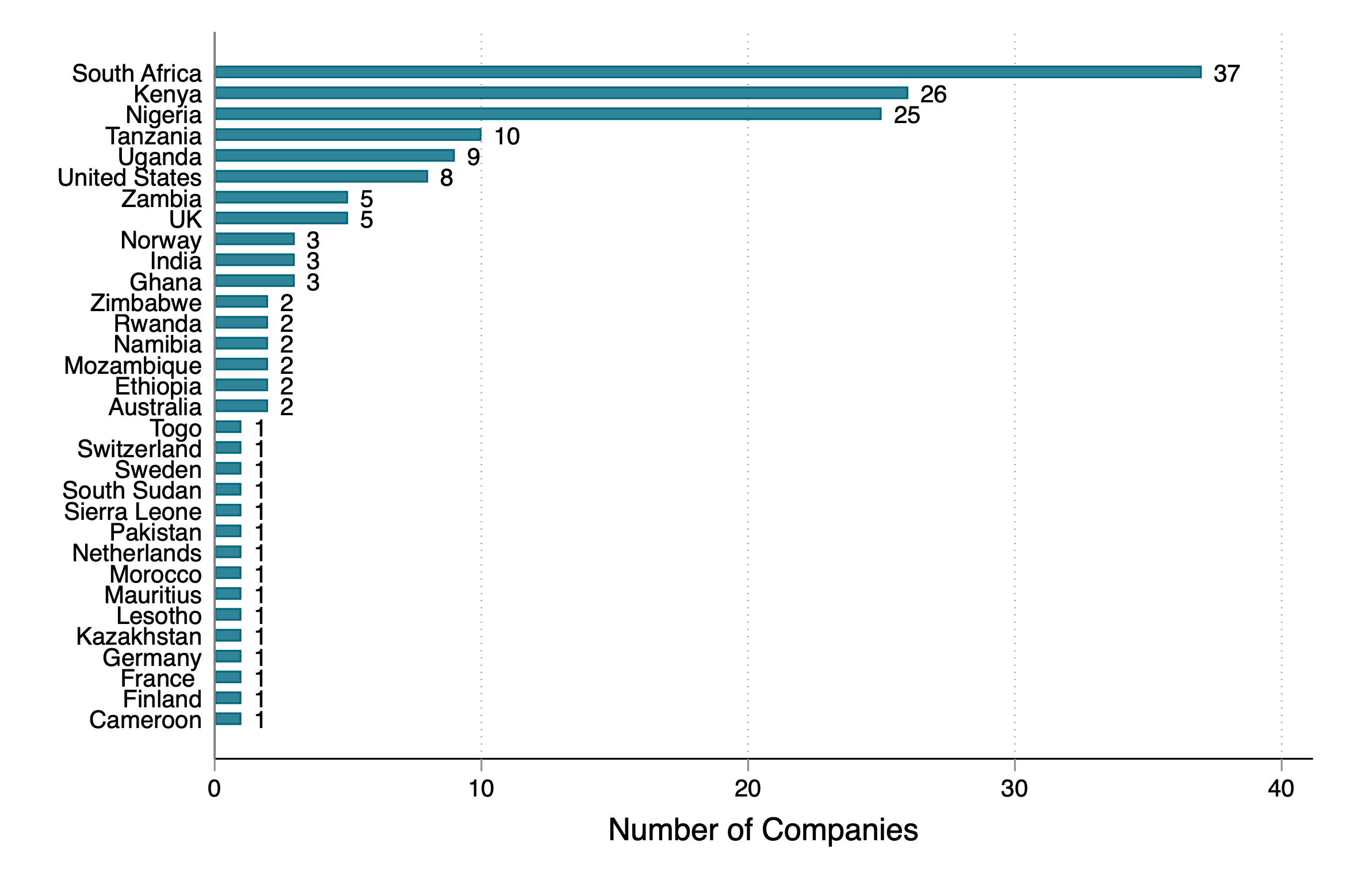 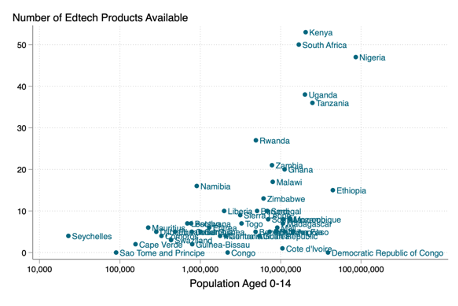 Note: Data from EdTechHub.org. 13 firms listed more than one country as their home country; the figure on the left presents data only from the first listed country. The figure on the right shows the number of available products in a country, regardless of where the organisation is based.

The future of edtech will be complementing teachers, not replacing them

Evidence increasingly suggests that technology done well should be thought of as a complement to traditional teaching, not a substitute. You need them both. A new NBER working paper by a team of economists from California and Moscow finds diminishing returns to more computer-assisted learning. The first “dose” is more useful than the next.

Figure 3. Edtech and traditional teaching are complements, not substitutes 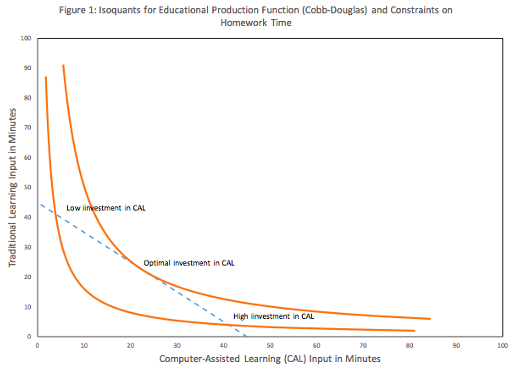 A second recent NBER paper by a different team found that new learning software delivered by a nongovernmental organization in Chinese schools had positive effects on learning, but the same software had no impact when delivered by the government. So the human element matters not just in the classroom, but also in the bureaucracy.

This raises an important challenge for the current crisis. What is needed right now are things children can do alone at home, delivered through low-tech options like TV, radio, and feature phones. What will be needed in the future is software that can be used to complement existing teaching—for instance by supporting teachers with remote coaching. And more than that, for both parents and governments to be able to choose effective software, what will be needed (as we researchers are so fond of saying) is more research on which products actually work.

Correction: This blog post and the first chart were updated to correct the user figures for Eneza Education. Eneza’s total usership is 8.5 million, instead of 60.0 million as initially reported.

Is your edtech product missing? Add it to the database here https://edtechhub.org/database/

The EdTech Hub database was assembled by EdTech East Africa, the EdTech Hub, the Center for Education Innovations, Injini, Caspar Groeneveld, and Tom Kaye. Thanks to Alexis Le Nestour, Jack Rossiter, Justin Sandefur, and Rita Perakis for helpful comments on this post.