Why Colombia Granted Full Rights to its 1.7 Million Venezuelans, and What Comes Next

This is one of a series of blogs exploring the issues facing refugees’ economic inclusion within the top refugee and forced migrant hosting countries. All are being authored with local experts, and provide a snapshot of the barriers refugees face and what the policy priorities are going forward. All blogs can be found here.

In the last five years, the exodus of people from Venezuela has become the second largest displacement in the world. More than 5.4 million have fled, with 1.7 million, or 30 percent, ending up in nearby Colombia.

The Government of Colombia has been incredibly generous towards this population, enacting several rounds of work permits which granted the right to work, move, and formalize their status. They should be celebrated for these moves, while supported to overcome the remaining constraints to full economic inclusion.

“Foreigners in Colombia shall enjoy the same civil rights as Colombians”

Article 100 of Colombia’s Constitution states, “Foreigners in Colombia shall enjoy the same civil rights as Colombians.” There are many refugee-hosting countries whose constitutions include similar language, yet few that have followed through on such a promise.

Within just a few years, 1.7 million Venezuelans have entered Colombia, fleeing violence and economic deprivation at home. The Government said they made an immediate decision to facilitate their full economic inclusion for three main reasons:

To implement this approach, the president’s office created a new position: Manager of the Colombian-Venezuelan border, with an associated office. The National Planning Department, with the support of this office, issued the CONPES 3950, a policy document detailing the strategy for integrating Venezuelans over the next three years. The document strongly argues that migration is not just an opportunity for the migrants, but also for receiving countries.

The Challenges in Regularizing 1.7 Million People

Still, economically integrating such a large population has come with its challenges. In 2017, the Government of Colombia created the Permiso Especial de Permanencia (PEP), a temporary and ad hoc special permit. It granted Venezuelans two years of regular status, work authorization, and access to public services, and could be renewed once. So far, just over 700,000 PEP’s have been granted, and researchers have found little evidence that the provisions have changed labor market outcomes for Venezuelans or Colombians. 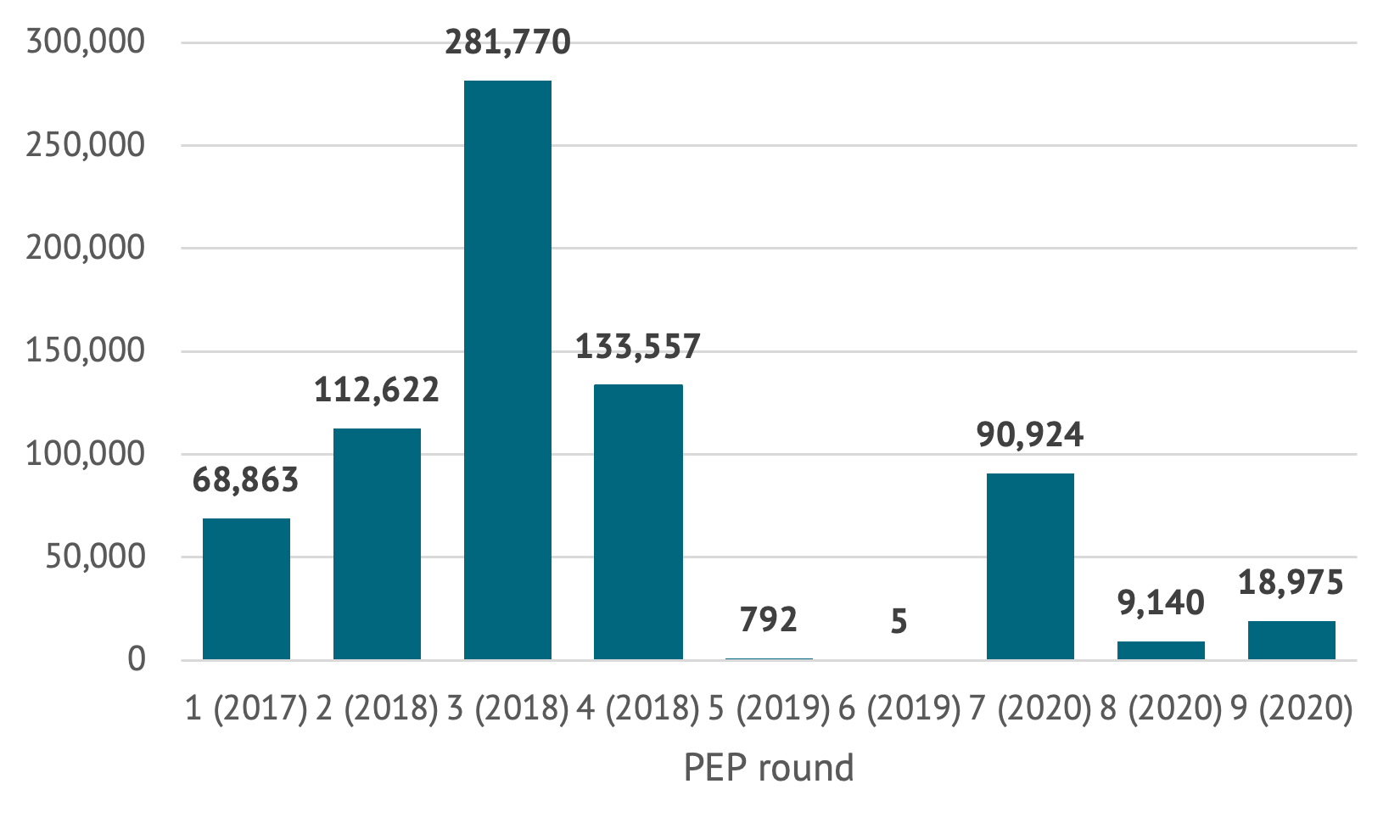 In addition, many Venezuelans have missed out on the PEP due to its prohibitive requirements. For example, if Venezuelans who entered Colombia missed the window to apply, they are not able to access the work permit. Those who arrived irregularly are also not eligible, even though the institutional and economic collapse within Venezuela means accessing official documents is difficult, leaving irregular movement as the only choice. Only 299 Venezuelans have been able to obtain refugee status in Colombia, out of only 10,479 asylum applications.

With or without the PEP, many Venezuelans face barriers in finding formal jobs that match their skills. Without formal work authorization, 70 percent of Venezuelans have been pushed into the informal sector. Across both formal and informal sectors, on average, Venezuelans earn $92 less than Colombians every month. 89 percent of those with foreign diplomas have faced difficulty getting those credentials accredited.

Women are particularly affected. Despite being more educated than Colombian women, less than 10 percent of Venezuelan women have formal jobs. Even those who can work are in the wrong place. Many are in border areas, such as Villa del Rosario, Maicao, or Cúcuta, where there are fewer opportunities.

Such pressures have impacted the way host communities in Colombia view the Venezuelan population. Between 2016 and 2019, Colombia dropped 2.15 points on Gallup’s Migrant Acceptance Index, the third largest drop (after Peru and Ecuador, both recipient countries of Venezuelans).

Venezuelans are blamed for lower wages, worsening working conditions, and rising crime. For example, a 2019 study by Oxfam found that 56 percent of Colombians felt Venezuelans take more than they put in, despite the evidence of contributions to GDP.

As a result, Colombians’ support for their welcoming policy has lessened. In February 2019, 34 percent of Colombians disapproved of their government’s handling of the Venezuelan crisis. By July 2019, this was up to 56 percent, and by October 2020, it was up to 80 percent.

Politicians have exploited this, and surveys show a correlation between political statement and public beliefs. Support for right-wing political parties in areas with large Venezuelan concentrations has increased. Addressing the outstanding barriers to Venezuelan economic inclusion, in a way that is inclusive of host communities and actively engages with these worsening views, will be crucial.

The Impact of COVID-19

Colombia has been hit hard by the pandemic. Over 40,000 people have died of the virus and Colombia’s GDP is predicted to fall by almost 8 percent, leading the country into its first recession in two decades. The work permit restrictions outlined above meant Venezuelans were crowded into sectors highly impacted by the pandemic, like food services and manufacturing. 37 percent of Venezuelans in Colombia lost their jobs.

The situation is even worse for women. 78 percent of employed Venezuelan women in Colombia were working in sectors highly impacted by the pandemic. Now, 31 percent of Venezuelan women are unemployed. As a result, despite the closure of the border in March 2020, more than 100,000 Venezuelans have elected to return home. The pandemic has also exacerbated host community concerns, with many Colombians associating Venezuelans and continuing cross-border movement with the spread of disease.

As the border re-opens, for every one Venezuelan returning home, it is estimated that there would be two entering Colombia. This will put further pressure on border towns and has therefore led Colombia to call for more humanitarian assistance. The 2021 Refugee and Migrant Response Plan (RMRP) has called for more than US$1.44 million to address humanitarian and integration challenges across Latin America. Colombia needs nearly half of it. Yet past experiences suggest receiving this funding is unlikely.

In 2019, the Border Manager’s Office created an Income Generation Strategy which identified the barriers Venezuelans face to full economic inclusion. Together with the Labor Migration Policy Management Group of the Ministry of Labor, they have begun by working on entrepreneurship, employment, financial inclusion, and credentialing. For example, the government has provided more than 5,000 professional recognition certificates through the National Learning Service.

They also created a new permit in January 2020. The Permiso Especial de Permanencia para el Fomento a la Formalización (PEP-FF) allows Venezuelans in an irregular situation with a formal job offer to regularize their status. According to Migración Colombia, by December, more than 9,000 PEP-FF’s had been granted.

Nevertheless, concerns with both of these measures remain. The Income Generation Strategy has not been fully implemented and barriers remain, many of which have been exacerbated by COVID-19. And while the PEP-FF is an innovative measure, it poses several protection risks. Tying regular status to an employment contract exposes workers to potential exploitation and abuse. The permit cannot be extended to family members, and therefore does little to reduce their vulnerability. Finally, the holder can fall back into irregularity when the permit ends.

Combatting these remaining barriers is going to take a coalition of the national and local governments, private sector actors, donors, and local NGOs. For example, planned and voluntary movement would ensure Venezuelans can access existing job opportunities, and targeted matching and training programs would ensure Venezuelans can access new ones. The private sector needs to be more involved than it has been to date, promoting the benefits of hiring Venezuelans and expanding financial service. Finally, women should be explicitly targeted with policies to support childcare and family responsibilities.

It is not often you see a country state clearly, pragmatically, and early the reasons why the economic integration of a new population should be prioritized, and then for that country to take pragmatic steps to execute this vision. Barriers remain, and COVID-19 has exacerbated them, but as long as such leadership remains in place, these challenges appear surmountable.

Event
A Bank for the World: How the Business Model of the World...
Amanda Glassman and Masood Ahmed