Who Is Going Back to School? A Four-Country Rapid Survey in Ethiopia, India, Nigeria, and Pakistan

Even before the COVID-19 pandemic disrupted education systems across the world, 263 million children were already out of school—a number that is likely to rise even as schools start to reopen after extended closures. Prolonged school closures, along with the economic and health strains brought on by the pandemic, may cause many children to drop out of the education system permanently.

To understand the impact of the COVID-19 pandemic on re-enrollment for girls and boys, CGD and Malala Fund collaborated to analyze results from a series of rapid surveys that Malala Fund commissioned in Ethiopia, India, Nigeria, and Pakistan. These surveys are among the first (to our knowledge) to elicit children’s self-reported likelihood of going back to school and their experiences during the pandemic.

Like most other countries around the world, Ethiopia, India, Nigeria, and Pakistan closed their schools in March 2020. Beginning in September, Nigeria and Pakistan started a phased reopening of schools, though Pakistan recently announced it is shutting down schools again. Schools still remain closed in India and Ethiopia. All four countries also imposed an economic lockdown to varying degrees.

The surveys offer a convenience sample covering respondents that organizations in Malala Fund’s education champion network already work with, except in Ethiopia, where the in-country partner was able to get authorization from the Ministry of Education to access school registers. The surveys, which are a mix of phone and in-person surveys, cover 1,302 respondents in Ethiopia, 3,176 respondents in India, 1,334 respondents in Nigeria, and 1,592 respondents in Pakistan. The surveys were carried out between July and September 2020 while schools were still closed in each of the countries. The anonymized data can be accessed here.

Lesson 1. Across the four countries, 4 percent of girls and 6 percent of boys report that they are unlikely to return to school.

Children are asked if they will return to school as soon as it reopens—overall 4 percent of girls and 6 percent of boys say “no” or “not sure.” Nearly all these children were previously enrolled in school. On average children were in grade 8 in India and Nigeria, grade 9 in Ethiopia and grade 7 in Pakistan.

Figure 1. A sizeable proportion of children respond “no” or “not sure” when asked if they will return to school 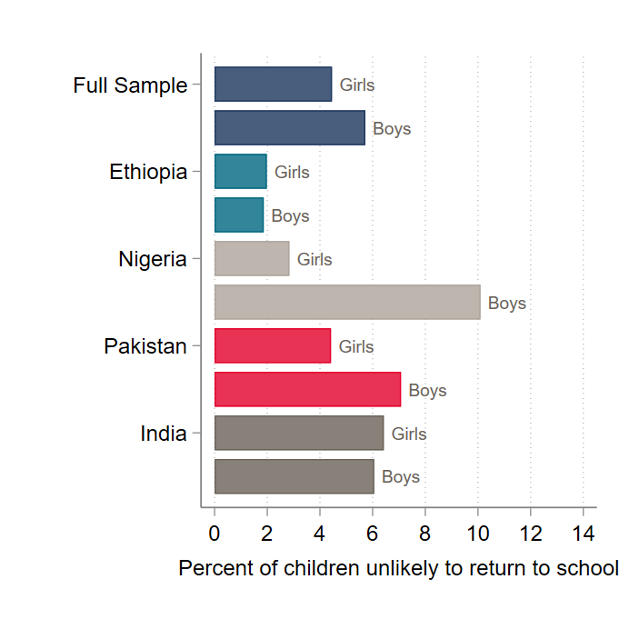 The likelihood of children reporting an intention to return to school varies by country. In India and Pakistan, more than 6 percent of children report that they are unlikely to go back to school, while in Ethiopia only 2 percent of children say so. Looking at differences by gender, boys are more likely to report that they will not return to school in Pakistan and Nigeria (where the gender gap is huge in magnitude) while girls are only slightly more likely to say so in India and Ethiopia. The impact of crises on boys’ enrollment are not sufficiently understood—boys may face increased pressure to drop out of school and earn for the family, especially in times of economic distress.

Analyses of past crises paint a mixed picture of the gendered impacts of crises on enrollment—a study of the 2005 earthquake in Pakistan finds no gender differences in re-enrollment, but a study of the 1986 meningitis epidemic in Niger shows reduced schooling for girls relative to boys afterward. Similarly, a study from Sierra Leone after the Ebola outbreak shows a substantial drop in girls’ schooling. Understanding the differential vulnerability of girls and boys to the crisis needs to be a priority for researchers and policy makers.

Lesson 2. Children in lower grades face a high risk of dropout in Ethiopia, Nigeria, and Pakistan.

Next, we look at whether the likelihood of re-enrollment varies by grade of the child. While these patterns vary across countries, children in lower grades are particularly at risk of not returning to school in Ethiopia, Nigeria, and Pakistan.

Figure 2. Percent of children reporting that they are unlikely to return to school is particularly high in lower grades in Ethiopia, Nigeria, and Pakistan 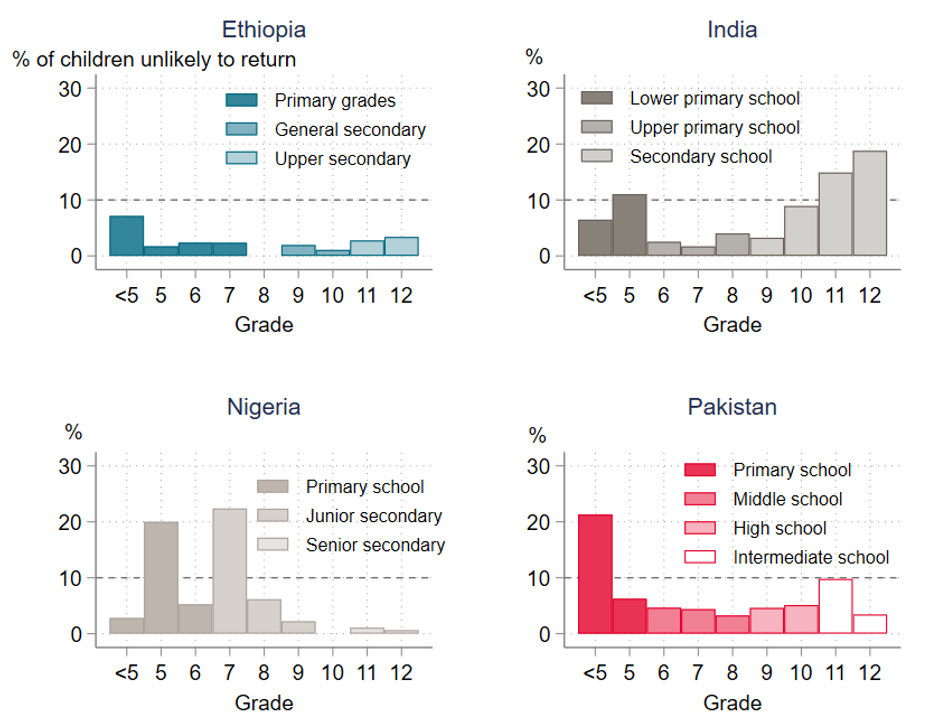 In Pakistan, children in lower grades (below grade 5) are much more likely to report not planning to return to school than children in higher grades. A similar pattern holds in Ethiopia. In Nigeria, we observe a spike in likelihood of not returning to school in grade 5, a year before a high-stakes exam determining transition to secondary schools, and then again in the first year of secondary. In India, two peaks are visible: children nearing lower primary completion and those nearing secondary completion seem most at risk of not returning to school. Understanding which grades are most at risk of seeing high dropouts has implications for how we target and design re-enrollment efforts as schools begin to reopen.

Lesson 3. School fees and the need to work, along with COVID-19 fears, are the most commonly cited reasons for not going back to school.

Among children who say “no” or “not sure” when asked if they’re going back to school, school fees and the need to work are key reasons in all four countries. While fear of COVID-19 is one of the most cited factors in Ethiopia, Nigeria, and India, it is less frequently mentioned in Pakistan where school fees and need to work are the biggest factors. However, since most children said they are going back to school, the sample size for this question is very low.

Figure 3. The most common reasons for dropping out of school include fees, need to work, and COVID-19 fears 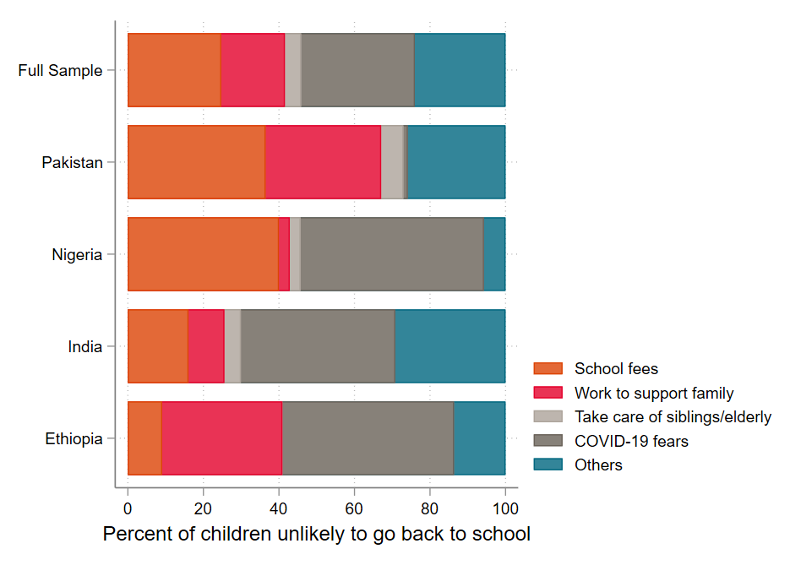 Even though sample sizes are too limited to do a detailed gendered comparison of reasons for dropping out, it is worth noting that a greater proportion of boys cite work to support their family as a reason for dropping out of school compared to girls across all four countries, while a greater proportion of girls cite COVID-19 fears relative to boys. Furthermore, preliminary analysis of responses from India suggests that more boys than girls are going to fee-charging private schools and may face heightened risk of dropping out due to the income losses faced by families.

Lesson 4. Six percent of households experiencing a cash crunch have children reporting that they are unlikely to return to school.

Figure 4. Children from households experiencing a cash crunch are at a higher risk of not returning to school 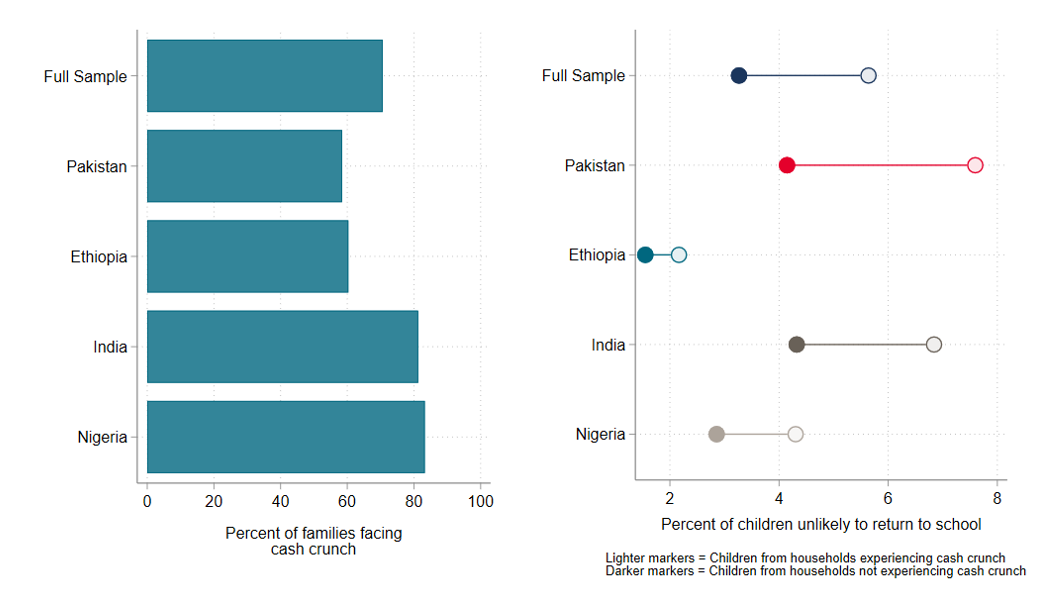 Lesson 5. Fifty-nine percent of girls report engaging with any type of learning activity at home during school closures compared to 62 percent of boys, with implications for remedial learning as children start to go back to school.

Children were asked about how they spend their day at home while schools are closed. Overall, close to 40 percent of children report not engaging with any type of learning activity at home, such as studying offline or using TV or radio for distance learning. One-fifth of children engaged in learning activities report that they use a television, and 5 percent mention using a radio. In Nigeria, radio use is much higher (22 percent) compared to the other countries where it’s less than 3 percent. Less than 15 percent of girls overall reported having access to a private tutor with a slightly higher proportion of boys (17 percent) reporting the same. Access to distance learning has implications for children’s preparedness as they head back to school and how schools implement remediation measures to mitigate learning loss.

Figure 5. A significant proportion of children are not engaging in any type of learning activity at all, especially children from households facing financial difficulties 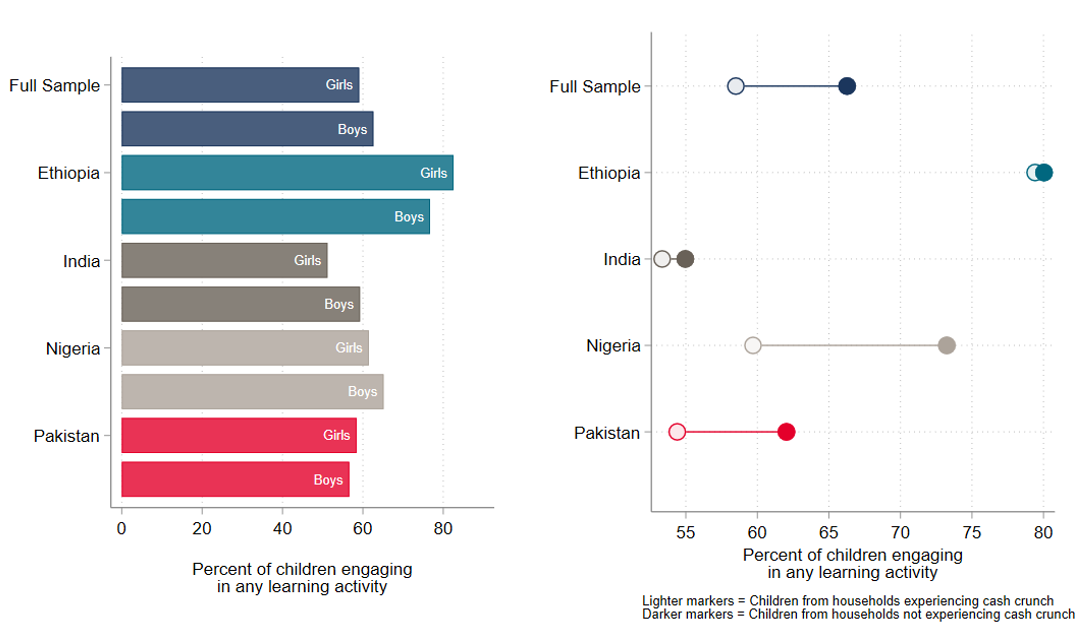 Additionally, there are huge disparities in access to learning at home between households experiencing a cash crunch and those that are not, particularly in Nigeria and Pakistan. Overall, 42 percent of children from households facing financial difficulties report not engaging with any type of learning versus 34 percent of children from households that are secure from economic shocks. Gender differences in terms of access to educational activities aren’t huge—in India and Nigeria, slightly more boys than girls are likely to report spending time on learning activities, whereas the opposite pattern can be seen in Ethiopia and Pakistan. Similarly, there are no big gender differences in terms of time spent on learning activities either—when asked how much time children would be able to devote to audio/video/postcard-based learning in a day, 20 percent of girls and 18 percent of boys report 3+ hours and 52 percent of girls and 56 percent of boys report 1-2 hours. However, self-reported measures of time allocation may be quite different from actual practice. Existing evidence suggests that girls are likely to spend more time doing chores and caring for siblings, which takes away from time spent on school work—in our sample 63 percent of girls report doing household chores compared to 26 percent of boys.

Data from Malala Fund’s rapid surveys suggests that a considerable number of children are unlikely to return to school, with the likelihood of return lower for children from households experiencing a cash crunch. School fees and the need to work, along with COVID-19 fears, are the most commonly cited reason for not going back to school. Understanding and addressing these financial and health-related concerns is crucial to make sure children don’t drop out of the education system permanently. Interventions such as cash transfers to boost school attainment, among others, may be promising but require more evidence in a pandemic context. Finally, while the current survey data does not show huge gender differences in the likelihood of re-enrollment or access to learning at home, more evidence through larger and representative samples is needed to understand the gender-specific barriers facing both girls and boys.

Thanks to Alexis Le Nestour for helpful comments.