What You Should Know About Global Health Financing Transitions: Five Key Takeaways | Center for Global Development | Ideas to Action Skip to main content

What You Should Know About Global Health Financing Transitions: Five Key Takeaways

In recent years many global health institutions—particularly Gavi and the Global Fund—have adopted eligibility and transition frameworks for the countries they support. These frameworks lay out criteria under which countries will lose eligibility for their support, and, typically, a gradual timeframe to phase out external financing. Other institutions, like PEPFAR and the Global Polio Eradication Initiative, lack explicit eligibility or transition frameworks yet are still expected to transition at least some countries from their assistance within the next decade. The question of how these transitions will play out in practice—and whether global health progress will be put at risk through premature or poorly planned transitions—is a hot topic in global health.

In my new paper, Projected Health Financing Transitions: Timeline and Magnitude, I took it upon myself to understand the implications of these eligibility and transition policies in the real world—both for recipient countries and for the global health funding mechanisms themselves. Drawing from the explicit or implicit eligibility policies for five global health funding mechanisms, I projected the timing and fiscal impact of anticipated global health transitions through 2040.

Of course, predicting the future is fraught with uncertainty; my projections required quite a few heroic (though explicitly stated) assumptions about growth and disease burden trajectories, just to name a few. I’m the first to caution that these projections are only indicative for planning purposes—they should not be interpreted as hard and fast predictions. Further, I only project changes in formal eligibility status—not the entirety of co-financing requirements and transition-related changes at the country level. As a result, my findings may underestimate the total fiscal impact of transition-related policies.

Nonetheless, the results are illuminating—and challenge some of the current conventional wisdom about transition processes. There’s much more detail in the full paper and accompanying databases; I encourage you to read the whole thing. But if you’re short on time—or if color-coded charts give you a headache—here are the five most important takeaways:

1. Gavi transition: coming soon to a country near you

Among global health donors, Gavi stands out for its extremely clear and well-structured transition process; as countries cross prespecified GNI per capita thresholds, they must take on increasing co-financing requirements, culminating in full self-financing of vaccination. Before 2017, just a handful of countries had finished this transition process—but the pace of the Gavi transition is now accelerating rapidly. By 2025, 31 countries that were eligible in 2015 will have fully transitioned from Gavi support; these countries, including big names like India, Nigeria, and Bangladesh, received a total of $522 million in 2017, representing 45 percent of Gavi’s overall spend. By 2040, just 27 countries will remain eligible for Gavi support. At the country level, these transitions from Gavi support happen at relatively low levels of GNI per capita (the current threshold is $1,580 to begin the five-year accelerated transition); they also tend to coincide with transition from IDA, a general source of concessional funding that could otherwise help governments to absorb the additional expense.

2. For most countries, formal Global Fund transition remains a distant prospect—but co-financing is already on the rise

Rhetoric suggests that transition is top of mind at the Global Fund—but the relatively inclusive eligibility policy suggests few countries will formally transition in the near term (see figure 1 below). Even under an extremely optimistic scenario of “universal progress” against the three diseases, transitioning countries by 2040 represent only about 11 percent of the Global Fund’s 2017 country allocations. Under the status quo, even fewer countries would transition, representing just 3.6 percent of the Global Fund’s current spending. In either case, the largest and most aid-dependent recipients of Global Fund financing will remain eligible through 2040. 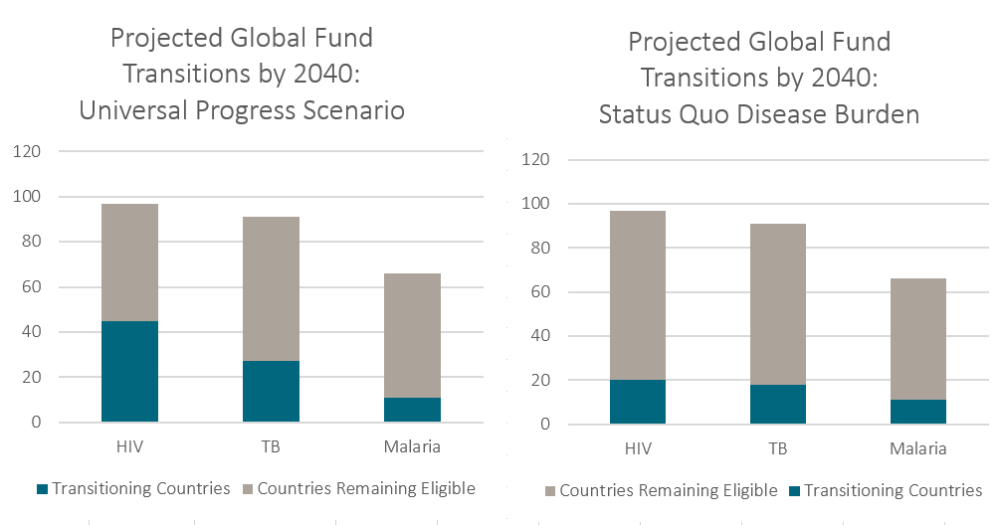 Despite recent setbacks, the world remains tantalizingly close to eradicating polio—a potentially monumental achievement. Yet the eradication of polio would also imply the imminent end of the Global Polio Eradication Initiative (GPEI)—a $1 billion per year source of funding, with resources concentrated in 16 priority countries. Though GPEI support is typically off-budget, it directly pays for 145 laboratories and more than 30,000 public health workers around the world, 25-50 percent of whom also support non-polio functions such as routine immunization, general disease surveillance, and supply chain/logistics strengthening. The rapid withdrawal of that support—which can be quite large relative to government general expenditure on health (GGHE-D; see table 1 below)—could be a major problem for a subset of recipient countries.

Unlike many of the other large global health funding mechanisms, PEPFAR lacks an explicit eligibility or transition policy; priority countries have been chosen historically based on disease burden, the level of financial need, US relationships, and other subjective factors, and updated based on the chosen strategic direction under successive Global AIDS Coordinators with congressional input. Yet PEPFAR’s strategy for 2017-2020 designates a subset of 13 countries where PEPFAR intends to “accelerate” progress toward epidemic control. On the blog, I recently considered whether PEPFAR’s “acceleration” policy would involve meaningful financial reallocations between countries; there are no clear answers yet, but budget requests were highly correlated with “acceleration” status. If true, budget impact could be significant; in the most well-funded countries, including some left off the “acceleration” list, PEPFAR disbursements are extremely large relative to government expenditure on health (table 2).

5. Where is transition (fiscal) risk the highest? You might be surprised

Looking across all the global health mechanisms, I identified a subset of 11 countries at particularly high risk from global health transition (see box). These are countries that would undergo one or more transitions at the same time, with cumulative lost funding representing at least 10 percent of government expenditure on health. Six of the “high-risk” countries are vulnerable to PEPFAR non-acceleration and eight countries will be affected by GPEI winddown; five countries will be affected by simultaneous PEPFAR non-acceleration and GPEI withdrawal. None are projected to transition from Global Fund support at any point during this time-period. And with the possible exceptions of Nigeria and Pakistan, these are not countries necessarily considered as “transitioning”; they generally have very low GDP per capita and weak health systems. For them, transition risk is primarily related to GPEI winddown and PEPFAR non-acceleration—neither of which directly consider country wealth or ability to pay.

So what can be done? Putting it all together, I suggest global health funders work cooperatively with countries to better understand the sequencing and magnitude of transitions, drawing on country-specific fiscal and programmatic context and better proprietary data sources, particularly for long-term GDP growth and disease trends. Upcoming replenishments for Gavi, the Global Fund, and IDA also represent an opportunity for bilateral donors—many of whom contribute to all three mechanisms and sit on their governing boards—to revisit eligibility policies and craft a more coherent global approach.

You can read the full paper here.