What Is the World Bank Doing to Improve the Lives of Women and Girls?

Today is International Women’s Day. How do we make sure that the fine words and aspirations tripping off the tongues of premiers and ministers this March 8th transfer into tangible progress for women and girls?

In our new paper, “Do the Results Match the Rhetoric? An Examination of World Bank Gender Projects,” we try to figure out how thoroughly the World Bank has incorporated gender into individual projects in the recent past and what the results of those projects have been. The short answer is: signs of progress but some way to go.

First we looked at a World Bank data set that assigns scores to all Bank projects from July 2009 to June 2014 according to whether they incorporate gender-related analysis, action, and monitoring and evaluation (M&E). In the data set, each project receives a score from 0 to 3, depending on how many of the components it includes (i.e., a score of 1 if it includes just gender analysis, a score of 2 if it includes analysis and M&E, etc.). Looking at the Bank’s own scoring of projects along gender lines, it says it is doing a lot better — the average score is up from 1.1 to 2.3 since 2009. 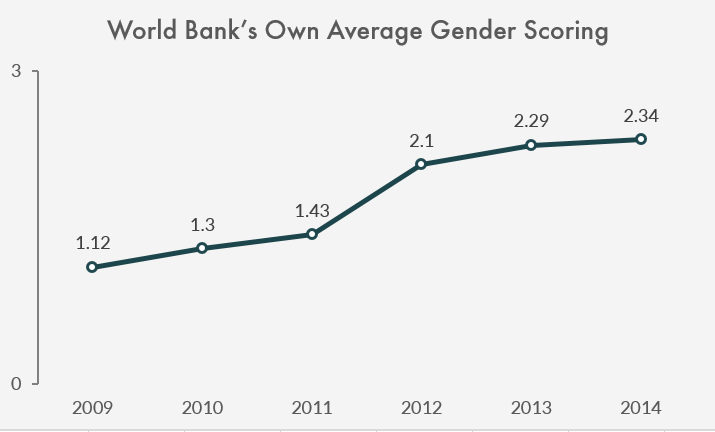 We then took our own look at a subset of Bank projects to see how this better scoring was reflected in practice. We chose all projects with a gender “theme.” This designation means projects have been classified by World Bank task teams as having an explicit focus on advancing gender equality outcomes. The 70 projects with a gender theme are just 4.2 percent of the 1,666 total projects from 2009 to 2014.

Fourteen of the 70 lacked any published results (related to gender or otherwise), either because projects were approved too recently or, for older or completed projects, results were unavailable on the World Bank’s website. Of the remaining 56 projects, 15 had published indicators of intended outcomes or outputs, but none of the projects’ main indicators were related to gender (by “main” indicators we mean the project development objective indicators (rather than the intermediate indicators) of each World Bank project).

That left 41 projects, which we found contained 89 gender-related project indicators. The majority of these indicators fell into one of two categories: quota-oriented indicators that required projects to include a certain percentage of female beneficiaries and indicators that we classified as gender-related (merely) because they called for results to be disaggregated by gender. A third smaller category of indicators related to specific gender-equality outputs or outcomes, such as “increase in the number of women in situations of violence and vulnerability attended to,” an indicator from the Development Policies for the State of Sergipe project in Brazil.

For finished projects which had published indicators and results, a little over one-third had no specified targets (e.g., indicators that called for measuring the percentage of female project beneficiaries, but did not specify an intended percentage). But among those with gender-related indicators and targets, five times as many targets were met than were missed.

That all suggests projects that focus on measurable targets related to gender outcomes can deliver — but also that there is a long way to go in terms of incorporating gender indicators and targets in more projects and better measuring what World Bank projects are actually trying to accomplish when it comes to gender.

The World Bank is still working to improve gender integration in projects. At the end of last year the Bank announced its new Gender Strategy, with new strategic directions for the institution and a greater focus on measurement. The greater focus matters: it is still very difficult to figure out what donors are doing around gender and development. We hope that the Bank will deliver on its strategy.  And we hope other donors follow along.  Stay tuned for more CGD discussions about multilateral development banks’ approach to promoting gender equality and our recommendations for how to better finance, implement, and measure their efforts.