Technological Revolution and the Future of Work 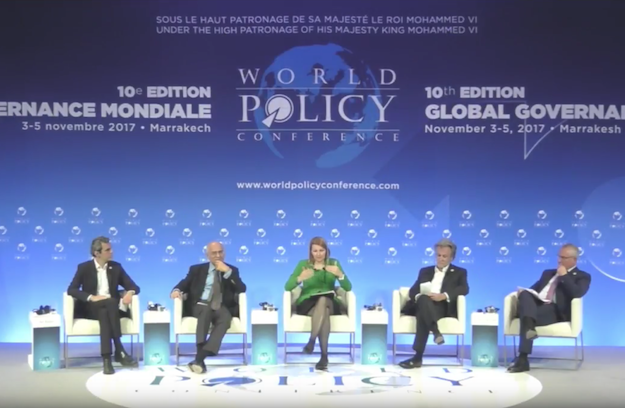 I was recently invited to participate in a panel discussion, titled “Artificial Intelligence and the Future of Human Labor” at the 10th edition of World Policy Conference. Preparing for this panel provided me with an opportunity to think more deeply about the ways in which artificial intelligence (AI) and automation will impact the future of work. And I came to five main conclusions.

Change is coming ready or not

Technological progress and the advancement of AI and automation will have a major impact on the nature of work in the coming decade. We are all familiar with the transport revolution where self-driving cars are now a question of “when” not “whether.” But we need to recognize that AI, robotics, 3D printing, and big data will change the nature of many different types of jobs in ways that we can already anticipate and in ways that we cannot even imagine today. And coping with this kind of widespread and rapid change—notwithstanding the gains it will bring—will raise difficult societal challenges that few countries are prepared to address.

Opinions vary on the extent and nature of disruption being caused by technologies and what this disruption will mean for human labor. Pessimists argue that large numbers of jobs could be impacted by disruptive technologies. For example, it is suggested that 47 percent of all jobs in the United States could be eliminated or significantly changed by computerization and intelligent digital technologies compared to 57 percent in OECD countries, 69 percent in India, 72 percent in Thailand, 77 percent in China, and 85 percent in Ethiopia.

The optimists, on the other hand, maintain that while many occupations could in theory be impacted, the actual pace of introducing new technologies into the work place will be more gradual, that in some cases robotic technology might turn out to be more expensive than traditional production methods. Thus, low paid garment workers in Bangladesh or Cambodia may simply be pressured to keep working at low wages if they want to avoid losing their jobs to robots. They also point out that it is “activities” that can be automated not “occupations.” This is certainly true but it still means that many occupations will be transformed because the activities that comprise them will be eliminated or radically changed. Finally, they point out that historically societies have been able to adapt to—and gain from—various waves of technological change and this time will prove no different. Unquestionably, the quality of life today for the vast majority of human beings is better than for our predecessors of a hundred years ago because of technology. And all along, there were people whose worries about the disruptive impact of technology proved exaggerated.

I believe that—as (almost) always—the likely outcome will be somewhere in between but the more important point is that even a slower pace of introduction of new technologies will still far outstrip the capacity of many societies to absorb the change. No one is seriously arguing that the pace of digital technological innovation over the coming twenty years will be slower than in the past two decades and it is now widely accepted that the way in which we have managed the political and social consequences of technological change in this recent past has been far from satisfactory. Therefore, it is important not to argue about the potential magnitude of the impact and instead to anticipate possible challenges that technology will create for human workers and ways in which the development community can help mitigate negative outcomes.

And not just in advanced economies

Discussions surrounding AI, automation, and the future of work tend to focus on the ways in which technological progress is affecting advanced economies. It is important to recognize, however, that the impact of new technology will be equally important for workers in developing countries. For example, Adidas employs about a million people, mostly in factories in Asia and Africa, to make about 300 million pairs of shoes every year. Last year they opened a “speed-factory” in Germany, that aims to make 500,000 pairs of shoes a year, with only 160 production jobs for human workers. The remaining jobs within the factory are automated and done by machines. Another example: FoxConn (the firm that produces Apple and Samsung products in China’s Jiangsu province) recently replaced 60,000 Chinese factory workers with industrial robots. In China as a whole, factories are projected to have more than 400,000 industrial robots installed by 2018, the highest number of any country in the world. And the jobs that will be impacted range far beyond manufacturing—many activities in agriculture, in services, and in government could be radically changed through the application of new technologies.

Policy discussions about the ways in which governments can be prepared for the radical changes in human labor that are coming must, therefore, include ways to limit negative impacts in developing countries. This includes rethinking the basic model of development pathways whereby surplus labor shed from agriculture is absorbed in simple manufacturing which raises both living standards and productivity. Technological progress that displaces workers could diminish the cost competitiveness of emerging economies that has, until now, driven their growth especially if these economies do not use new technologies to increase productivity. As manufacturing becomes increasingly automated, emerging economies will need to find strategies to decrease their dependence on manufacturing exports to boost growth. These strategies will obviously vary by country due to differences in resources, policies, and infrastructure capabilities.

Historically we have seen that after a technological revolution, new and better jobs are created after the initial displacement of workers but that these workers need new skills to adapt to these new jobs. The need for new skills is even more critical today because of the pace and breadth of technological change. However, while many agree that our current education system is not teaching our children the skills they will need, we are not as confident about what precise skills tomorrow’s workers will need or how best to ensure that they acquire them. Continual skills training and life-long learning could help workers gain necessary skills to keep up with the changes in activities required within a job due to automation and AI. Education efforts could also help some workers shift from easily automatable jobs into less automatable jobs such as those in healthcare or childcare. However, the vast majority of workers in developing countries have no more than a high school education and it is not evident that they could be easily retrained for the skill set needed for the new economy. Nor is it clear how governments would pay for this retraining or incentivize companies to bear the costs of retraining.

Beyond jobs to relationships

AI and disruptive technologies will impact not just the nature of work but also the relationship that workers have with their employers, with colleagues, and with the state. Legal systems are already grappling with the question of whether an Uber driver is a “worker” in the traditional sense. A larger question is how to provide security of work and income to the potentially large share of the workforce that will work in the gig economy. One idea is to adopt a universal basic income (UBI) to insulate workers, whose jobs were replaced or changed by disruptive technologies, from poverty. Additionally, a UBI could enhance the ability and security for workers looking for better jobs or entrepreneurial opportunities. And a universal basic income could spur innovation and encourage people to take entrepreneurial risks because of the safety it provides. However, there are basic issues of affordability and regressiveness that need to be addressed before this idea can be applied on any large scale. There are also issues of how healthcare, pensions, and professional skills development will need to be modified in a world with many more individual contractors. This is of course more complicated in developing countries where financial resources are limited and institutional capacity is underdeveloped.

Finally, we need to recognize that this new era of technological revolution will be political as much as economic. With the rise of automation there will be winners and losers and redistribution will be necessary to compensate the losers and a failure to do so can have enormous political consequences. In the United States and Europe, a failure to adequately compensate the losers of globalization and technological change has helped lead to a rise of populism which is changing the political landscape.

Change is here. While we may not know how large this change will be or what the effects this technological revolution will have on human labor in five, ten, or twenty years, it is highly likely that the scope and magnitude of change will require considerable societal adaptation and that this process will need extensive preparation and discussion. We need to start thinking now about different development approaches that can help mitigate the negative impacts of the technological revolution in both advanced and developing countries.

Technology and Development
Automation and the Future of Work
Education