Even before the Covid-19 pandemic, health taxes on the consumption of tobacco and alcoholic and sugary drinks—also known as product-specific excise taxes—were a good policy prescription as an effective tool for both improving health and raising revenues. Their policy urgency is now even greater as health is fundamental to building back better. Additionally, revenues are needed quickly to bolster global fiscal support of close to $12 trillion worldwide and rising.

The health costs of consumption of tobacco, alcohol, and unhealthy diets—including sugar-sweetened beverages—are staggering, leading to about 17 million premature deaths each year from non-communicable diseases including cancers, heart disease, and diabetes. These account for one-third of total global mortality. The socioeconomic costs from the resulting lost income and additional healthcare costs are about 5 percent of global GDP (Figure 1). And these costs are predominantly a burden for developing countries, which account for the bulk of users and consumption.

Now, more than ever, health taxes have a vital role to play in improving health outcomes and raising revenue to recover from the impacts of Covid-19. In our accompanying policy paper, we show how beneficial health taxes could be for many low-and middle-income countries (LMICs), and outline the crucial role of the World Bank and the International Monetary Fund (IMF) in moving this forward. 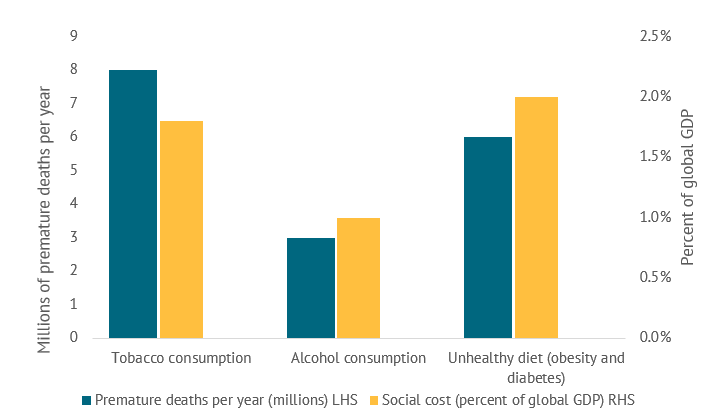 Using Health Taxes to Support Revenue: An Action Agenda for the IMF and World Bank

The global evidence on the impact of taxes and prices on the consumption of these products is strong. Not only do corrective health taxes have a clear health benefit, saving lives and reducing the economic and social costs of consumption, but they also raise much needed funds. Funds that would be crucial to responding to the Covid-19 pandemic. Higher taxes that lead to higher prices for health-harming products save more lives (Figure 2). 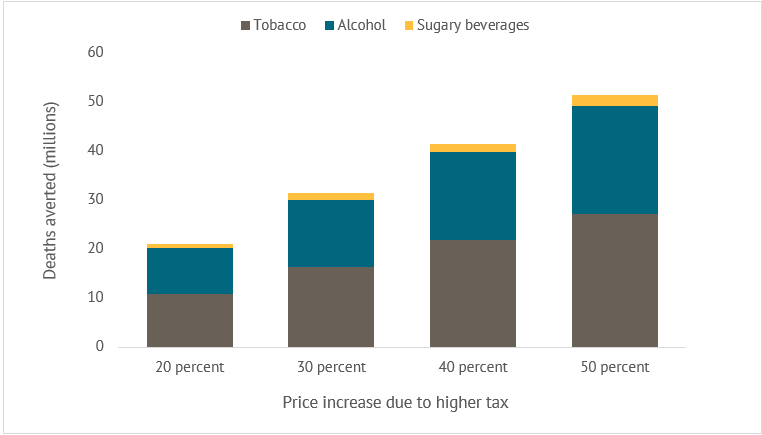 Source:Health Taxes to Save Lives Report, 2019

From a public health perspective, efficient health taxes would set excise tax rates such that product prices reflect the total economic and social cost of consumption. These include premature death, lowered productivity, health care costs, and externalities arising from consumption such as accidents and crime (related to alcohol) and secondhand smoke from tobacco. It is the consumers who bear these additional costs, potentially without even knowing. With incomplete health and nutrition knowledge, many consume these products in excess to a great detriment. This includes underestimating the long-term health costs, especially when addictive consumption begins at an early age (internalities) and society at large (externalities).

How did this work in Chile?

We can illustrate using data from Chile, where tobacco, alcohol, and sugar consumption is relatively high. At 80 percent of retail prices, Chile’s tobacco taxes are elevated by international standards. Data from an IMF/OECD report shows that the social cost of alcohol consumption is nearly five times higher than alcohol excise revenues, the social cost of sugar consumption from sugar-sweetened beverages is more than three times the sugary beverage tax collections, and tobacco consumption social costs are 60 percent higher than tobacco excise collections. Corrective taxes of about 1 percent of GDP would be needed to make up the shortfall (Figure 3). 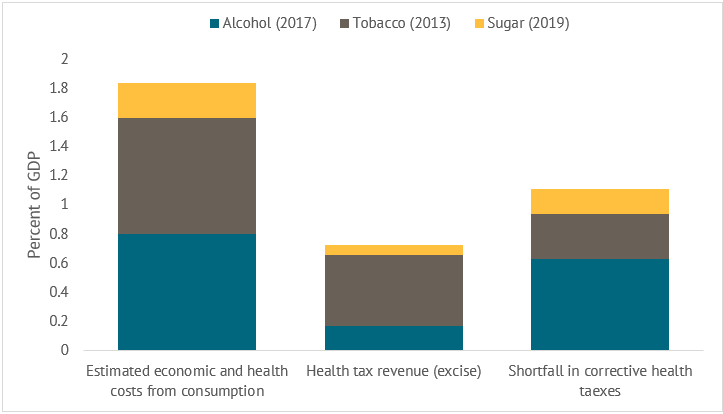 Raising much needed funds: How much could health taxes raise in LMICs?

The amount of revenue that could be raised depends on many factors, including consumption level, institutional capacity, demand elasticities, existing tax rates, and structures. Our new policy paper on health taxes finds that LMICs could raise up to 0.6-0.7 percent of GDP in additional tobacco, alcohol, and sugar-sweetened beverages revenues as a short- to medium-term revenue benchmark. This revenue benchmark is informed by previous experiences of raising excise revenues, the cross-country distribution of existing excises by product, and actual yields from some of the 40-plus countries that already tax sugar-sweetened beverages.

It would likely be enough to cover the cost of additional direct spending on health resulting from the pandemic but would constitute only part of a package, including international assistance, of the overall fiscal packages that have been implemented in 2020. A health tax and spend package that supports health spending over the medium term could provide a compelling reason to use health taxes as part of the pandemic response without necessarily earmarking health tax revenues.

We can see from the charts above that health taxes can have a tremendous impact on health outcomes and improving lives. Yet producer lobbies have long opposed corrective health taxes as either unfair, unenforceable, or a driver of unemployment, and they devote significant resources to obstructing health taxes. We disagree. First, careful tax design is important, particularly to avoid unintended consequences from cross-price effects, e.g. trading down to cheaper more harmful products. Second, mitigating actions may be needed to ensure reforms protect the poor and vulnerable, and do not encourage illicit trade.

Health taxes may adversely impact poorer households in the short run. However, a disproportionate share of the potential positive health and productivity effects accrues to poorer households, who are more responsive to price changes resulting from health taxes. The short-term impact on poverty and inequality can be offset by a tax and spend package ensuring that some of the revenues raised are spent on pro-poor programs such as expanding health care to low-income groups (e.g. The Philippines) or providing child allowances (Montenegro). However, social safety net coverage in low-income countries is often weak, and if health tax revenue is used to expand social safety nets it may generate public support for health tax reform.

Health tax critics argue that higher taxes and prices result in increased illicit trade and tax avoidance. However, a global review of experience by the World Bank indicates that taxes and prices have only a limited impact on the illicit market share for cigarettes. Non-price factors such as governance status, weak regulatory framework, social acceptance of illicit trade, and the availability of informal trade networks appear to be far more important determinants. Accordingly, the strengthening of tax administration and tobacco tax reform should be viewed as complementary activities. For example, in every country that has raised tobacco taxes by a non-trivial amount, consumption fell and revenues rose.

The argument that taxes, by reducing sales, cause significant job losses at producers and distributors of tobacco, alcoholic and sugary beverages needs to be weighed against the new jobs created by the shifting of consumption to other products, as well as jobs created by spending tax revenues on other activities. Nonetheless, it is important to assist workers affected by shifting consumption patterns.

An agenda for action on health taxes

Our new policy brief Using Health Taxes to Support Revenue: An Action Agenda for the IMF and World Bank concludes that international financial institutions, supported by relevant UN agencies, can play a significant role in promoting well-designed health taxes as part of the fiscal response to the pandemic building on their track record of health tax reforms in policy-based lending and grants.