Strategic Reset: How Bilateral Development Agencies Are Changing in the COVID-19 Era

Development agencies have some hard choices ahead. COVID-19, overlaid on existing global challenges, is the biggest stress test that official bilateral development agencies have ever faced. With alarming speed, the pandemic has delivered a global economic shock of enormous magnitude resulting in the deepest global recession in eight decades. Global human development is on course to decline for the first time since 1990, and we can assume the indirect effect will dominate in many developing countries and particularly the poorest communities over the long term. At CGD, we recently co-hosted a two-day conference to bring together the heads of development agencies, to discuss the most pressing challenges at hand. This blog summarises the main messages of an analysis I presented at this year’s Development Leaders Conference, outlining some of the changes in development agency strategic direction brought about by the pandemic. I put forward three fundamental questions to heads of development agencies, the answers to which will define development cooperation for the foreseeable future.

As demand for assistance increases and supply of assistance depletes, development agencies are being asked to do more with less. Bilateral aid commitments have fallen by almost 40 percent in 2020 compared with the same period in 2019. Official development assistance (ODA) commitments alone have fallen by 26 percent. They are trying to exert greater control over their multilateral spending through earmarking funds. But in so doing, they are contributing to the fragmentation of the multilateral system, diverting the focus away from core mandates towards more narrowly defined donor-specific priorities. Whilst they are providing substantial international support for COVID-19 measures, most of their contributions are financing the international efforts on the development of COVID-19 drugs and vaccines. 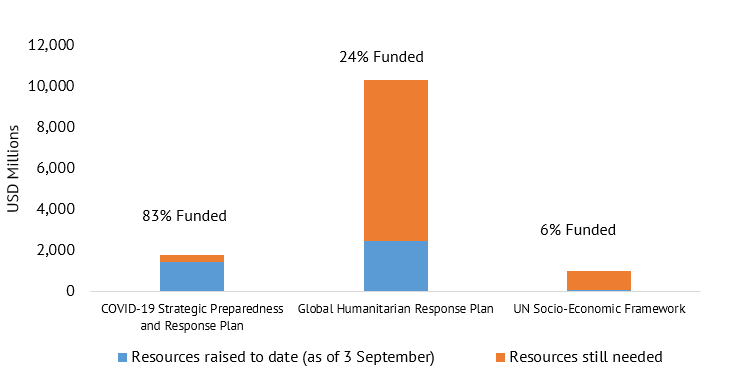 Engaging in a zero-sum funding competition between sectors

Indicative analysis from Development Initiatives based on IATI data shows that, in the first nine months of 2020, aid commitments to health from bilateral donors increased by over 20 percent from 2019. But this increase in spending on health appears to have come at the cost of other areas, in particular, in support for conflict, peace and security, as well as economic and productive sectors, where commitments are falling in volume and percentage terms. With the exception of small increases for education, trade and tourism, and government and civil society, commitments to all other sectors are lower compared to the same period in 2019. A similar response occurred during the Ebola outbreak in Guinea, Liberia, and Sierra Leone in 2016. While the proportion of aid directed towards the health sector went up by some 300 percent, other sectors, in particular, agriculture, lost substantial funding. 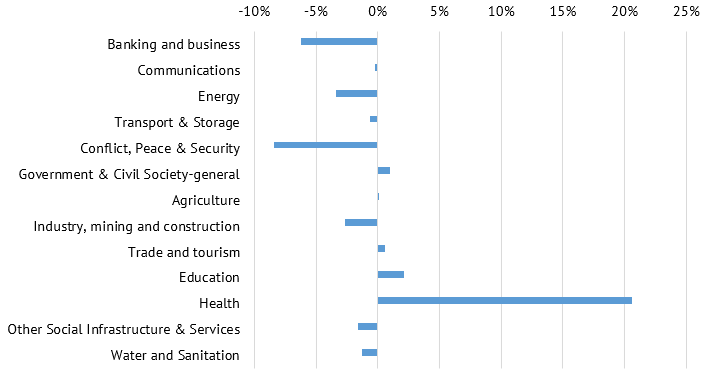 The distribution of aid commitments from DAC development agencies has remained largely unchanged, with 43 percent allocated to LICs and with more than half of aid being allocated to MICs. There are some agencies, such as the European Union (EU) institutions, that see a stronger case for assisting MICs as conduits for global and regional responses to climate change, fragility and migration challenges, as well as pandemics with the trade-off being the inevitable dilution of the once-claimed cooperation priority of reducing poverty in LICs. 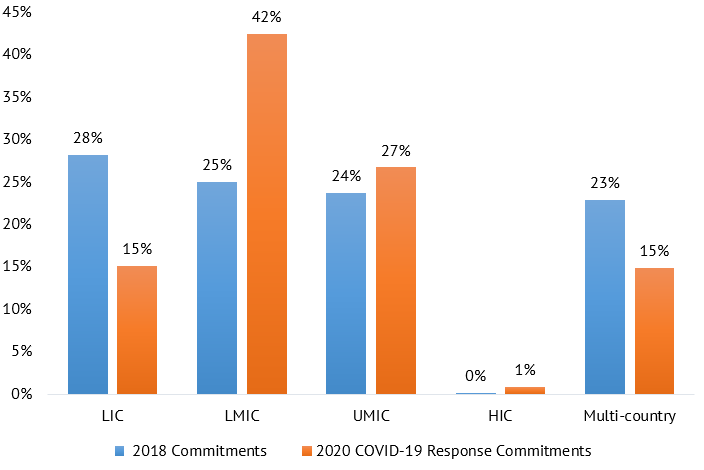 Buckling under the increasing pressures on ODA

As countries focus available and scarce public resources on domestic priorities and economic recovery, there is very likely to be a fall in aid levels with a potential for real cuts in aggregate ODA. The impact of the economic downturn on global development budgets is at the centre of the debate particularly in those countries which have structurally tied ODA volumes to gross national income (GNI), the UK being a case in point. The UK has already announced a reduction in its ODA to GNI levels from 0.7 percent to 0.5 percent. Germany and the Netherlands have projected slight decreases in ODA in 2021. While Italy and France have projected increases, almost all of France’s increase will go towards debt rescheduling or debt cancellation. Moreover, as during the global financial crisis in 2008, DAC countries may again seek to change the criteria for which expenditures and transfers qualify as ODA to “retrofit” their own priorities. 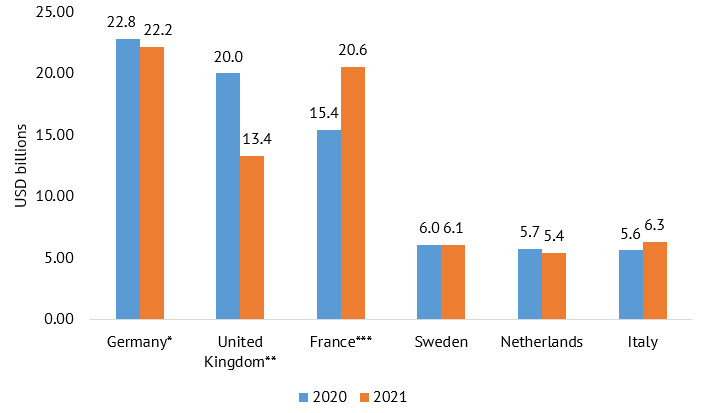 * Sum of BMZ and AA budget

*** Including $4.8 billion increase in debt rescheduling/cancellation

Source: CGD Estimations based on 2020 spending reviews and 2021 budget proposals

As the health and economic crisis has spread like a streak of lightning, development agencies have tried to respond by deploying rapid and flexible financing instruments, including cash transfers at the micro level, budget support at the macro level and risk sharing tools, such as guarantees. These latter instruments are areas in which the EU has been a practice leader, with well-established precedents for both sector-specific and large budget support programmes, and an external investment programme providing guarantees. However, sluggish disbursement rates have been a real problem. Both Team Europe’s and World Bank’s disbursement rate is on pace to reach only 50 percent of the announced goal.

Figure 5. Team Europe’s response to COVID, commitments vs disbursements (Up to October 2020) 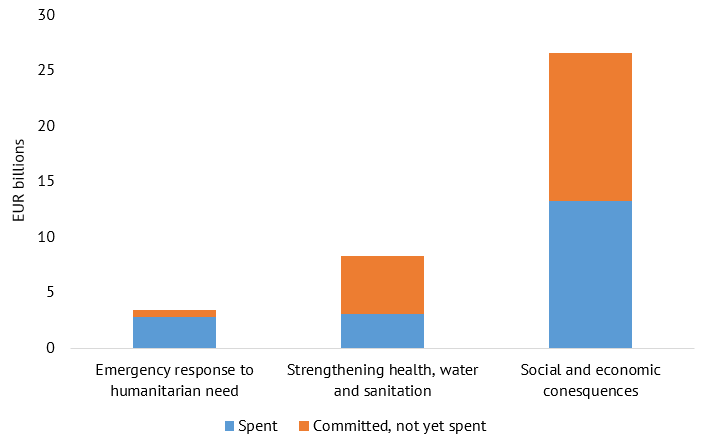 Given the above, development agencies are faced with three fundamental questions:

Initial discussions at the Development Leaders Conference demonstrated that consensus among development agencies on answers to these questions continues to remain elusive, particularly on the use and role of aid. Yet, now more than ever, the development community needs to pull together and agree on a common pathway.

The author is grateful to Samuel Pleeck for his input and representation of the data.