by
Bernat Camps Adrogué
and
Ranil Dissanayake
May 31, 2022 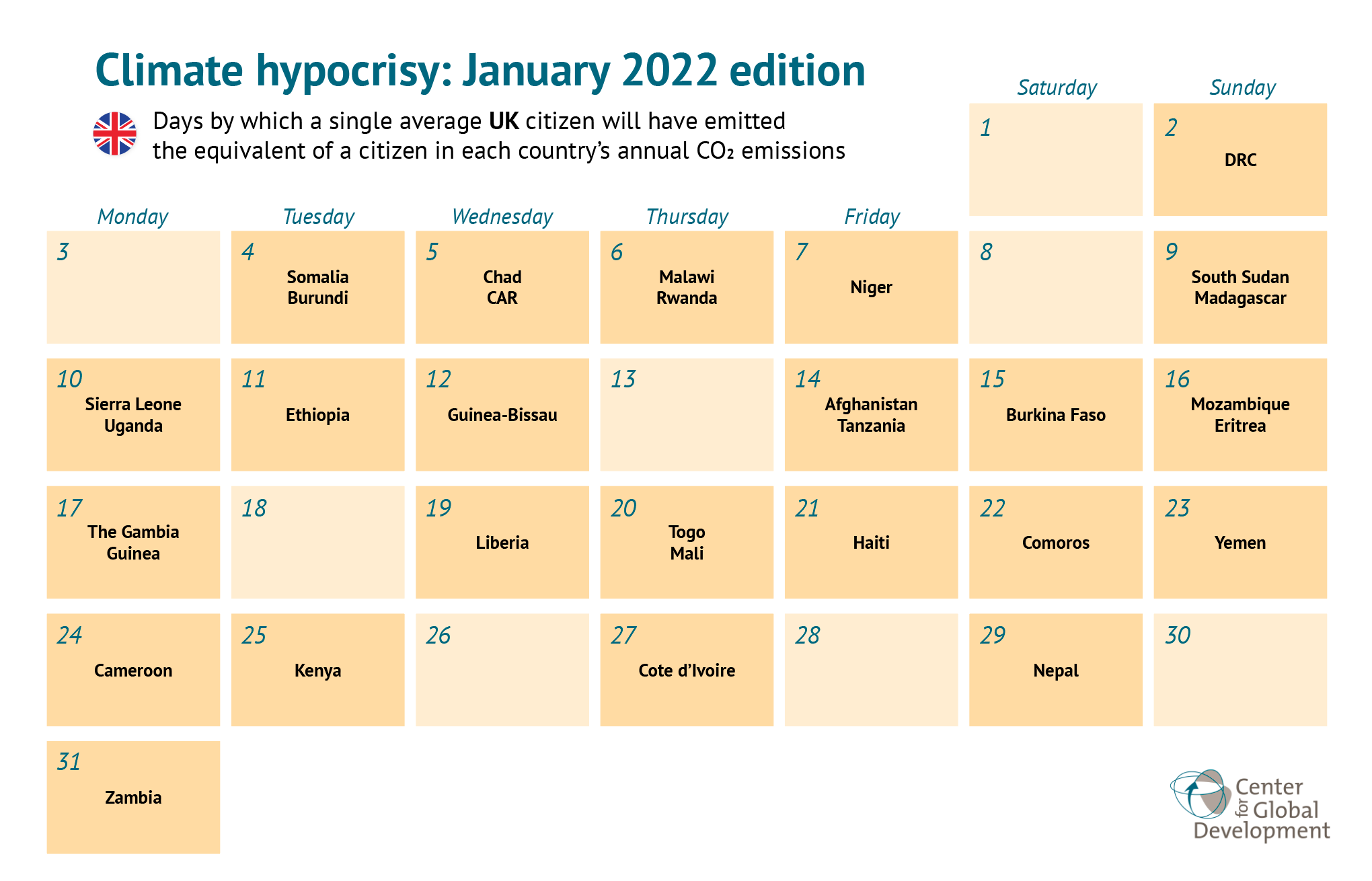 How have the ways in which political parties think about and frame global challenges to the electorate changed over the last three decades, as both the challenges and the political climate have shifted? One way to answer this question is to look at their election manifestos. Though the way in which political parties communicate with voters has changed significantly—there is much more direct interaction using Twitter and other social platforms—in the UK at least, political promises are still primarily defined by what goes into the election manifesto. Political manifestos are used by parties to communicate to citizens what their vision of the country is; to set our where they stand compared to their competitors, and their intentions if elected.

In this blog, I look at how political manifestos in the UK have changed over the last 30 years from two angles: Climate change and development.

In order to do this, I wrote Python code that counts relevant keywords (listed in Table 1, below) and analyses the context in which these keywords have been used—if, for example, the manifesto mentions these issues with respect to national interest arguments (either through foreign policy or domestic policy), or if the keywords are used in terms of tackling global or international challenges, rather than achieving outcomes for the UK specifically. In addition, to complement the analysis, I used data from the Manifesto Project which investigates manifestos for how closely they align to political positions such as the welfare state or market economy, as well as for their attitudes towards specific issues like sustainability. The data from the Manifesto Project has already informed numerous academic papers that aim to analyze political manifestos in a specific country or years.  The results from the manifesto project, constitute a relative share of statements for each category in relation to all statements in the manifesto. A “0.1” means that 0.1 percent of the manifesto was devoted to that category. The scale runs between 0 and a 100. As noted above, this blog post primarily aims to analyze the attitudes and priorities of political parties, not the policies proposed or the outcomes of these.

Liberal Democrats manifestos have consistently been most positive about environmental protections

Over the last 30 years, the Liberal Democrats have consistently been most positive about environmental regulation and sustainability. Though there are currently high levels of positive sentiment across all three main parties, this is more a correction after years of decline than the result of a steady upwards trend.

The Manifesto Project started evaluating positive language relating to sustainability in 2017. During the first evaluation, the Conservative Party scored the lowest with 0.87—remember, that means a little less than 1 percent of the manifesto focused on sustainability—while the Labour Party scored 1.28 and Liberal Democrats scored the highest with 2.65. Positive attitudes increased in 2019 for every party, but some more than others. While the Conservative Party increased to 1.71, the Labour Party raised to 4.75 and Liberal Democrats reached a 6.20 score. Though two data points are not enough to conclude there’s a growing tendency to talk positively about sustainability, it is clear that both the starting level and the magnitude of the increase was smallest for the Conservative Party manifestos and largest for the Liberal Democrats. Extinction Rebellion, a major UK-based environmental movement, was formed in 2018, between these manifesto years; the increase in prominence and positivity around sustainability may reflect its short-term salience and it will be interesting to see what the next set of manifestos look like (and to see if hosting COP26 has any impact).

Climate is primarily mentioned in a national context and development in an international one.

The results of the wordcount suggest that climate is—for all parties—more commonly framed as a “domestic” rather than an “international” issue.  Second, while the Labour Party and Liberal Democrats follow the expected pattern of mentioning development keywords in an international more than a domestic context, the Conservative Party actually discuss development more, or as much as a national interest activity as an international one—perhaps unsurprisingly. 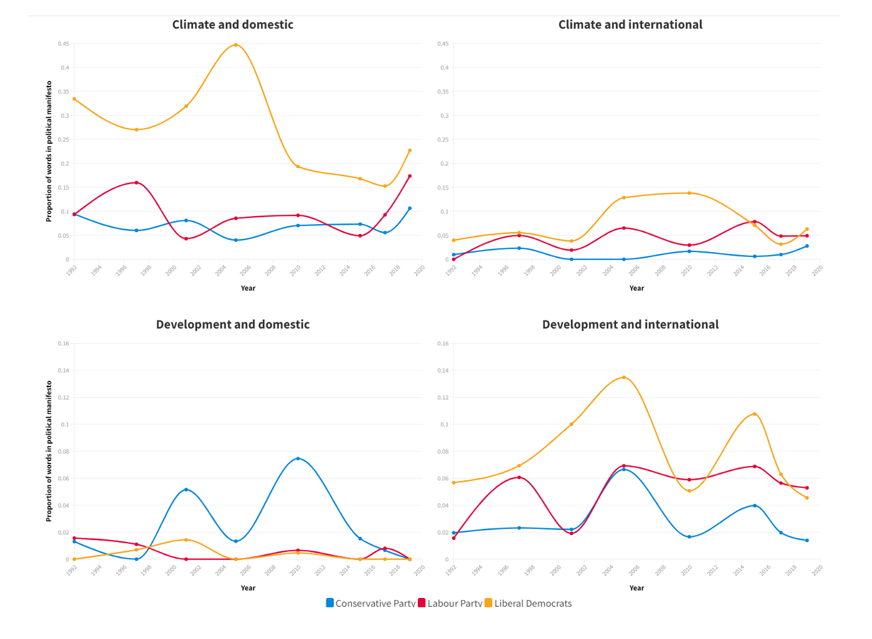 Decreasing positive attitudes towards internationalism since 2010 across parties

Positive attitudes towards internationalism have decreased continuously since 2010 (its peak year for Labour and Conservative parties, while 2005 was the—much higher—peak for the Liberal Democrats) across parties as measured by the Manifesto Project; the level of positive attitudes towards internationalism in 2019 in political manifestos is lower for every political party than it was in 1992. Recent events, including Brexit, the merging of the Department for International Development into the Foreign Office, and the aid budget cuts can thus be seen as reflections of a longer-term trend in sentiment across all three parties’ manifestos.

The UK, despite its “Global Britain” branding, has become more insular in both its actions and in the way all of the major parties communicate to voters. Time will tell if this trend will be reversed at the next election, whenever that is. 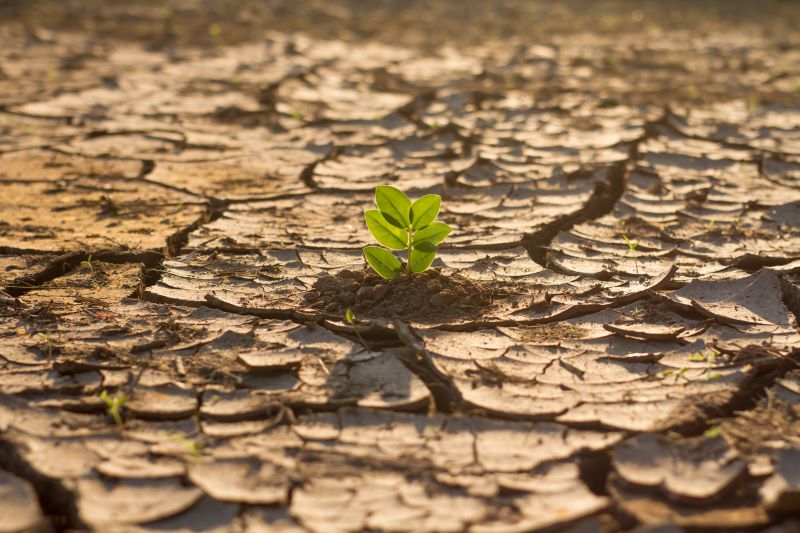