Replenishment Crunch Ahead: Implications for the Future of Global Health Financing | Center for Global Development | Ideas to Action Skip to main content

Replenishment Crunch Ahead: Implications for the Future of Global Health Financing

In 2019, major sources of concessional finance—the big global health funders like the Global Fund and Gavi, as well as the development-bank-based IDA and the African Development Fund, which provide grants and low/zero interest loans to low-income countries—will ask their existing, and potential new, donors for more money to accomplish more health and development. In health, the concessional funds have driven important gains.

The funds will be hoping for at least as much from their donors in the upcoming round as they received in the last round—about $123 billion. But there are some key features of past replenishments that raise flags for the future, while also suggesting new strategies to enhance the impact of global health replenishments and the effectiveness of their funders.

My colleague Scott Morris recently took a look at past trends in concessional funding and flagged three key facts: 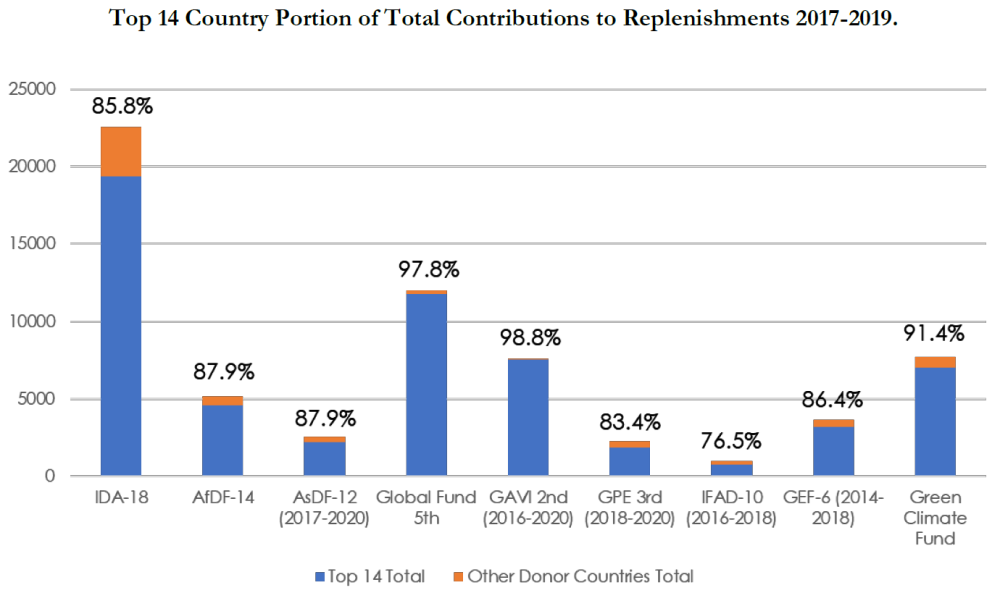 These facts yield some interesting insights for global health, but also some questions as we think forward to the replenishments in 2019:

First, since infrastructure and other kinds of development investment are as or more important to health outcomes as health services, and because I care about growth and development more broadly, I am worried to see evidence that some of the top 14 donors are playing a zero-sum game with their contributions to concessional financing facilities. Roads are key to families being able to reach health centers and hospitals; port infrastructure and supply chain delivery channels are key to ensuring medicines/vaccines reach people who need them; electricity enables vaccine cold chains to be maintained, and services to be provided, among other linkages.

I strongly support the missions of the global health funders and believe that their replenishment requests are justified; however, it would be better to see the pie expand. Is this feasible?

Second, a strong IDA is vital for achieving global health and development objectives. IDA lends about 30 percent of its resources for social sector investments that are on-budget in low-income countries in sub-Saharan Africa. IDA is also part and parcel of the newly created Global Financing Facility (GFF)—also seeking a modestly sized replenishment—that creates an incentive for greater use of the World Bank’s IDA and IBRD resources for health; to date, the GFF has leveraged around $7 IDA/IBRD dollars for each dollar of its grant spending. IDA also has a replenishment negotiation process where policy and allocation issues are debated and discussed amongst its contributors, and then disclosed and made available in the public domain.

These IDA strategies are interesting and relevant for the global health funders and their replenishments, and raise some questions: Would it make sense for an entity like the Global Fund to leverage its donations to obtain increased levels of debt-financed spend? Should the Global Fund do concessional lending in lieu of straight grants in some countries? What would that take, or would it blur the distinctions between the global health funds and IDA?

Third, given that past replenishments have not added new donor countries, can we expect new countries in this round? If not, do we need to expend the effort and expense to run replenishments to get the same donors to give again? Perhaps the answer to this question is “yes” given political changes in governments over time and/or the need to gradually seek participation from countries like China and India for the thematic funds, but is it worth considering costs and benefits more carefully in the future?

Finally, underlying the facts and questions is a reality that, within some donor governments, the governance and budgets of different concessional funds are run out of different departments. In the US, for example, the US Treasury holds the budget for IDA and other MDB-based funds, the US Department of State owns the budget for the Global Fund, and the US Agency for International Development holds the purse for Gavi. Only the US Congress can look across the concessional funds to set priorities or adjust allocation, an arrangement that belies the ability of the US government to approach the issues strategically.

There is much more that could be said and discussed around the interesting facts laid out in Scott’s analysis. Similar eligibility criteria across funds may create a fiscal crunch for countries losing status, for example. And there is much that IDA and others could learn from the global health funds. But perhaps the most important insight is for the donors and the advocates that support the replenishment processes: a holistic view of concessional financing for development is essential if the global community is to deliver financing that works for low-income governments and their partners.

Stay tuned for more work, and please share your views on the questions and their answers below.