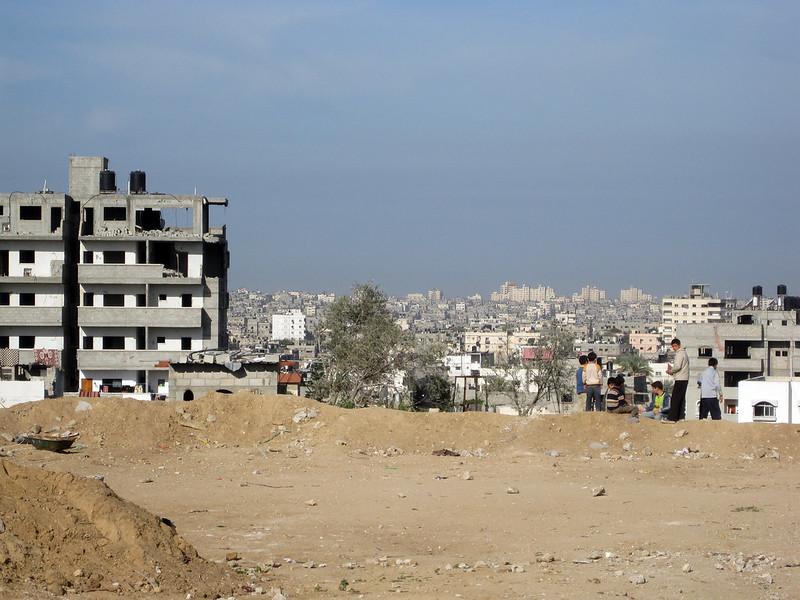 The Future of US Assistance to Fragile States
Sarah Rose
October 22, 2019

Even before the Biden-Harris administration took office, they made clear that one of their top international priorities would be renewing the United States’ commitment to multilateralism. Within the international financial institutions (IFIs)—the World Bank and the International Monetary Fund (IMF)—as well as the United Nations, the US agenda over the next four years will be one of re-engaging with management and rebuilding coalitions with allied shareholders to advance priority issues and approaches. One of these priority areas will be improving the effectiveness of engagement in fragile states.

In this piece, we outline a number of ways the Biden-Harris administration can leverage its reengaged US leadership within the multilaterals to both advance US goals and support more effective multilateral engagement in fragile states.

Over the last several years, many multilateral and bilateral donors have renewed their focus on fragile states. Drawing lessons from a somewhat unsatisfying track record of engagement, these donors have begun to reorient the way they work in fragile states to better advance peace, stability, and resilience to complex risks—goals that have only become more important as the COVID-19 pandemic puts additional strain on existing vulnerabilities.

For the United States, the 2019 Global Fragility Act (GFA) and the 2021 strategy for GFA implementation outline a set of approaches that, if well implemented, promise more coordinated and effective engagement. The key underlying principles of the GFA include:

These same principles also underpin the World Bank’s year-old Strategy for Fragility, Conflict, and Violence (FCV) that it is beginning to implement. And the IMF is exploring how the findings of an evaluation of engagement in fragile states by its Independent Evaluation Office can inform strategic thinking about possible new approaches in FCV contexts.

As the top overall donor to fragile states and the largest shareholder in both of these IFIs, the United States has a central role to play in advancing more effective development policy in these challenging contexts. With its own principles for better engagement largely aligned with those of the IFIs, the United States is well placed to participate actively in the IFIs’ efforts to improve FCV outcomes. It can also use its voice in the UN to advance more effective and coordinated practices in fragile states. Here, we propose three categories of steps the United States should take to leverage its role in multilateral institutions to pursue these shared goals.

For the United States to coordinate well with external partners, it first needs to get its own house in order to create and present a more unified internal strategy. Here, the GFA promises to help. The legislation directs the State Department, the United States Agency for International Development (USAID), the Department of Defense, and other agencies to identify shared long-term goals and develop a joint strategy for how to achieve them. To help meet this mandate, the National Security Council will host a GFA steering committee and State will chair a working level interagency secretariat. While the GFA and its implementation strategy only tangentially address the role of the Department of the Treasury, its integral involvement in these structures—as the agency that manages the US relationship with the IFIs—will be mission critical, especially given the GFA’s emphasis on cross-donor coordination.

Furthermore, even as the GFA puts impetus and structure around interagency coordination, it won’t be an easy road. To avoid getting bogged down in the turf battles, unclear mandates, and ambiguous authorities that have plagued so many past interagency efforts, GFA implementing agencies should prioritize coming to a priori agreement on answers to the hard questions like who has budgetary, policy, and legal leverage? How will agencies resolve disputes when they disagree? And how will agencies integrate complementary efforts that sit outside the initiative (e.g., humanitarian assistance)?

And, of course, strong interagency coordination also depends crucially on intra-agency dynamics. When interagency fora become a venue for intra-agency arm-wrestling, coordination suffers. Each agency will need to work to reconcile potential differences among its own regional and/or functional bureaus and bring a unified voice to the table.

Second, use US muscle within the World Bank and IMF to ensure good implementation of their own new (Bank) or forthcoming (IMF) fragile states strategies.

The World Bank’s FCV strategy promises a more thoughtful and strategic approach to fragile states; however, the policy and programmatic shifts it implies will undoubtedly face challenges in implementation. US support for the strategy—both on the board and financially, as necessary—could be instrumental in advancing its implementation and could perhaps provide a counterweight to any resistance that might arise among Bank management or staff.

The IMF is in somewhat earlier stages of rethinking its approaches in fragile states. As it does, the United States could play a strong role in championing a new approach that looks at longer-term strategic issues, coupled with target financing. This would require budgetary resources and management initiative, but a push by the United States and like-minded G20 members could encourage the IMF to move off the mark.

Third, champion international coordination mechanisms and the multilaterals’ roles within them

The GFA strategy commits the United States to work with other donors to share program information, avoid duplication, optimize assistance toward shared objectives, and ensure consistent messaging. But even as the United States seeks to improve how it coordinates its own aid with other donors, US representatives can also use their influence within the multilaterals to help shape how these institutions foster coordination within the aid system in ways that support US coordination goals. The following are four ideas the United States could encourage within the IFIs and/or United Nations to advance these objectives.

Coordinated analysis and messaging across the World Bank, IMF, and United Nations

The three multilateral institutions often have longstanding partnerships with fragile states, each bringing to the table its own focal area(s) and comparative advantage(s). UN agencies help support peacebuilding, political mediation, and development goals, the World Bank engages in promoting growth, development, and resilience, and the IMF works with countries to stabilize and strengthen macroeconomic conditions. Despite shared overall goals of increased peace, stability, and resilience, however, there is a risk that, without deliberate coordination, individual pursuits end up sending confusing or contradictory messages to the partner government or even working at cross purposes with one another.

The three international institutions do have a history of coordination, especially between the World Bank and the UN and the World Bank and the IMF, but scope for improvement remains. As a lead shareholder in the IFIs and strong voice at the UN, the United States could encourage each agency to pursue concrete steps toward greater cross-institution coordination, including strengthening political economy and multi-dimensional risk analysis and ensuring findings are shared across institutions, understanding and carrying one another’s messages to governments and citizens, exploring staff incentives for collaboration, and establishing a joint research agenda on approaching particular tipping point risks in fragile states.

A forum to coordinate bilateral and multilateral support across fragile states

While coordination platforms often exist within individual fragile states, there is currently no forum in which the largest donors can coordinate their actions across fragile states. A convening of this type—akin to the (now-dormant) pledging sessions for balance-of-payments assistance or the Paris Club for debt issues—could discuss how aid allocation can capitalize on different donors’ comparative advantages and how to promote more consistent application of good practices in fragile contexts. The United States could look to spearhead an effort like this within the World Bank or the United Nations—or even the IMF, for finance-focused engagement.

Expanded support for and engagement in country platforms

A country platform is a government-led coordinating body that brings together donor partners and other stakeholders to define shared goals and coordinate the various development and peacebuilding efforts in the country. While country platforms have had an overall mixed record of success, they may be particularly promising in fragile states, where ownership is more tenuous and implementation capacity may be limited.

There has been some new momentum around country platforms in recent years. They emerged as a priority of the G20’s 2018 Eminent Persons Group on Global Financial Governance. And World Bank president David Malpass indicated that the Bank would expand its support of country platforms in fragile states.

Country platforms could prove helpful for GFA implementation. The GFA encourages the United States to pursue “compact-based approaches,” in which the donor would work in concert with the partner country government (and other local entities) to outline mutual responsibilities toward shared, country-led objectives. In many compact-based approaches, like those of the Millennium Challenge Corporation, partner government commitments involve policy and institutional reforms that advance the agreed upon objectives. While there’s little detail yet on what compact-based approaches might look like under the GFA, to the extent that they might include policy requirements, it could make sense to try to align these requirements with other donors’ efforts and messaging. Country platforms could be a natural conduit for doing so.

But given country platforms’ mixed track record, their future success will hinge upon being able to clearly answer several questions, including what the scope and purpose of the platform is and what success looks like, how “country ownership” will work, especially in a context where the interests of certain government or other local actors conflict with development or peacebuilding goals, and how roles for various actors—donors, the private sector, civil society—will be defined. But despite anecdotal evidence of success, like the country platform in Somalia, there has been limited investment in efforts to learn, across the range of models that have existed, what makes these structures work well (or not). This has prompted experts to call for greater investment in stock taking exercises that could then inform how to approach the organizing questions outlined above. The World Bank could be well positioned to lead this learning effort.

Another way to encourage donor alignment—with or without a country platform—is to seek alignment on indicators and measurement plans. Coordination on outcomes can identify opportunities for more efficient data collection and set the stage for more consistent messaging, a goal of the GFA. The United States could encourage the IFIs to play a stronger role in promoting this kind of alignment.

The United States’ reengagement in multilateral fora is a welcome shift after four years of waning interest in global cooperation. Through a combination of encouraging the institutions’ own nascent strategies, fostering multilaterals’ roles as linchpins of coordination, and getting its own house in order, the United States can help the multilaterals pursue more effective IFI engagement in fragile states while simultaneously advancing US goals and setting up scaffolding for more effective implementation of the GFA.