Religion and Widowhood in Nigeria

In his opening remarks at this week’s Women Deliver conference in Vancouver, Canadian Prime Minister Justin Trudeau noted the importance of recognizing intersectionality—the multiple dimensions of disadvantage women face related not only to gender, but to identities like ethnicity, religion, and marital status. Policymakers in Africa working to enhance women’s equality would do well to keep this in mind, as Annamaria Milazzo and I show in a recent paper that finds socio-cultural identity influences the well-being of widows in Nigeria.

In Africa, where widowhood and divorce are common and the rights of women are mostly conditional on marriage, changes in marital status are likely to influence the success of policies aimed at empowering women. African widows often face considerable disadvantage relative to married women in their first union. How much so depends on the society they live in—in some contexts, hardships are more pronounced, while in others there may even be benefits to widowhood. The issue of marital shocks and women’s welfare has not been given enough attention by policymakers trying to enhance women’s well-being and overall equality. In the absence of effective policies, a widow’s situation is likely to depend heavily on the social-cultural norms applying to women following the death of a husband, with implications for policy.

In our paper, Annamaria Milazzo and I investigate this issue by comparing the well-being (as measured by body mass index, or BMI, and rates of underweight) of young (15-49-year-old) Nigerian widows and non-widows across Christian and Muslim groups using the Demographic and Health Surveys (DHS) of 2008 and 2013. We focus on Nigeria because the ill-treatment of widows is a grave concern there, as evidenced by the literature on the indignities and economic consequences of widowhood, the many NGOs focused on the rights of widows, public opinion surveys, and DHS data pointing to considerable dispossession among—and violence against—widows.

We focus on Christians and Muslims because of the different processes that the aftermath of marriage dissolution takes across the two religions: Islamic inheritance law stipulates a better treatment of widows than does customary family law, which generally applies to Christians. Islam as practiced in West Africa provides a semblance of a safety net to women who have suffered marriage dissolution through high, and socially expected, remarriage rates facilitated by the continued practice of polygamy. These differences suggest that widowhood may not have the same consequences for Christians and Muslims.

Muslims account for roughly half the population of Nigeria but they tend to live in different areas than Christians, predominating in historically disadvantaged areas with higher poverty and worse access to basic social and infrastructure services. This is reflected in a pronounced and significant average gap in nutritional status that favors Christian over Muslim women (figure 1 shows BMI, but the pattern is similar for underweight). This overall Muslim BMI disadvantage is found to be almost entirely explained by women’s worse individual and household level characteristics. Controlling for the latter, the average gap largely vanishes.

Figure 1. BMI by age and religion 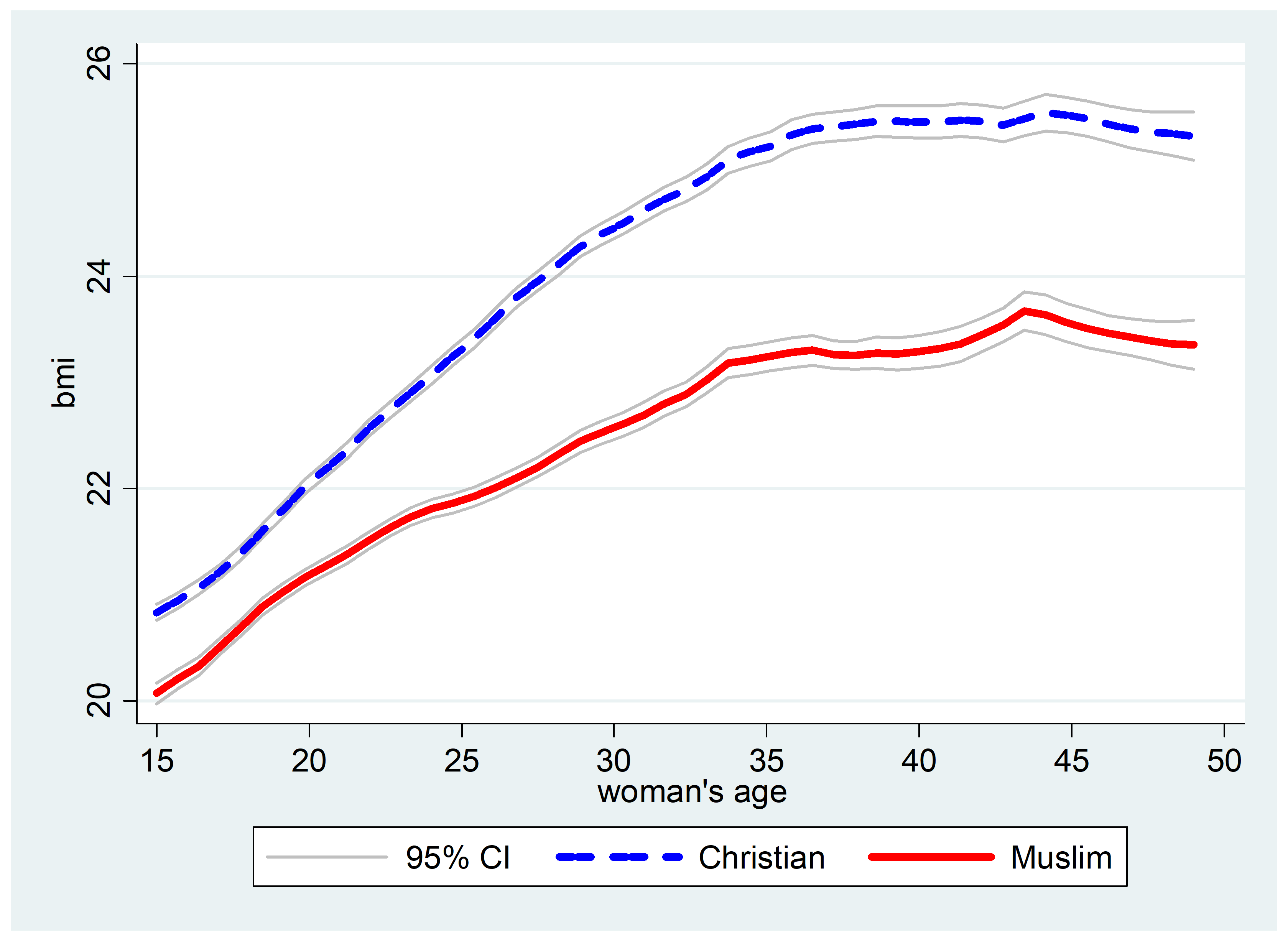 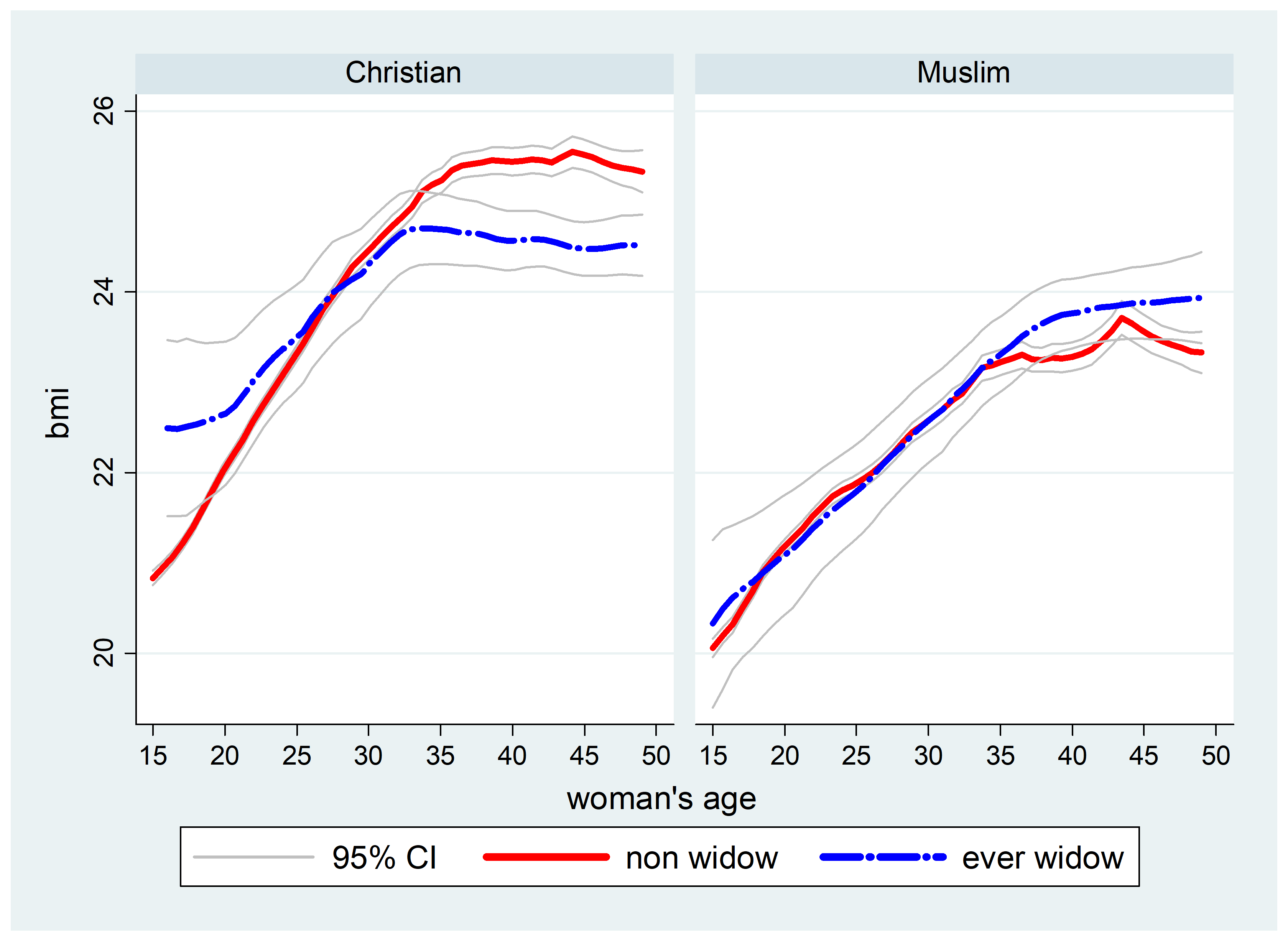 However, a rather different picture emerges when women are disaggregated into those who have never been widowed and those who have (figure 2). Strikingly, the religious gap in BMI is largest for non-widows, and considerably smaller for widowed women, especially at older ages, where more widows are found. In fact, the BMI gap is not statistically significant at ages over 40. Indeed, relative to married-once women in each religious group, current widows are found to be disadvantaged among Christian but not among Muslim women. And, remarkably, once women’s attributes are taken into account, the direction of the gap reverses among widows. Our paper finds that among Christians, widowhood is associated with worse nutritional status, but this is not the case among Muslims. This is consistent with qualitative evidence that Muslim women are better protected from marital shocks.

The patterns found in the data support the relevance of religion-specific norms regarding widowhood in explaining our findings. This holds independently of other factors that may drive differences across religious groups due to individuals living in different places or belonging to different ethnic groups. Christian widows also report a higher incidence of cruelty and violence at the hands of in-laws and consistently inferior inheritance outcomes, including significantly higher rates of dispossession than do Muslim widows. The greater acceptability and ease of remarriage through the practice of polygamy also favors widowed Muslims. The revealed nutritional status differentials among widows may or may not be influenced by such practices. At a minimum, they are undoubtedly a reflection of the same socio-cultural norms and processes that attend the shock of a husband’s loss.

A more or less equal share of Muslim and Christian women experience widowhood. But once it happens, cultural and religious norms combine with a women’s reproductive history and attributes to determine a widow’s welfare and life outcomes. Muslim widows fare better despite their worse overall endowments.

Our paper provides new evidence that such practices have impacts on physical well-being. Recent research documents the presence of excessive deaths and undernutrition among widows in Africa. We argue that more favorable inheritance rules and social norms that more readily accept and encourage remarriage appear to considerably ease the shock of widowhood for Muslim relative to Christian women in Nigeria. The socio-cultural-religious norms and processes that follow widowhood for Muslim women clearly go some way to protect their health and well-being.

The fact that some religion-based institutions can offer protection to widows gives hope that government policies could also do so, though not necessarily in the same way. For example, widow’s pensions have had a long history in social protection policies in today’s rich world (going back to times when it was a lot less rich). Policies in today’s developing countries could also play an important role in helping (often young) women and their children deal with the adverse impacts of widowhood.