The Problem Isn’t that Chinese Lending Is Too Big, It’s that the US and Europe’s Is Too Small | Center for Global Development | Ideas to Action Skip to main content

The Problem Isn’t that Chinese Lending Is Too Big, It’s that the US and Europe’s Is Too Small

As the possibility of a new Cold War between the US and China gains traction in some foreign policy circles, the scale of Chinese development finance has taken center stage. A report from the Center for Strategic and International Studies suggests it poses “a significant long-term strategic threat to US interests.” The chairman of the US Senate Foreign Relations Committee stated, “the United States and Europe must compete with China, and we must do so with vigor.” And an important element of that is responding to China’s investments in developing countries including in Africa, where “through long term debt deals through the One Belt One Road initiative process they control and build infrastructure and acquire valuable resources.” The numbers can look impressive: in recent years, Chinese financing volumes have approximately equaled those of the World Bank. But a closer examination suggests the cost to China of this lending is distinctly underwhelming. It would be cheap for the US and Europe to match China’s lending numbers –and in the interest of global development if it was done right.

Generosity is best measured by how much China is giving to other developing countries, not how much it is lending at near market rates. And the sum total of China’s annual development finance measured on a grant equivalent basis is worth $5.1 billion a year, a little more than Sweden’s $4.5 billion, less than a third of the UK’s or Germany’s, and about a sixth of US finance for international development. Even an upper-end sensitivity estimate only puts it at $8.4bn, still under half of the UK’s or Germany’s. China today has an income per capita above the UK’s in 1960. In that year, the UK provided 0.56 percent of GNI in aid. That compares to current Chinese giving at about 0.04 percent of GNI.  On a grant-equivalent basis, its development financing as a percentage of GNI is far smaller than its fellow BRICS Brazil, Russia, India, and South Africa (that despite the fact it is richer than all but Russia). It isn’t clear how much appreciation this relative lack of generosity really generates–and the evidence we have from recipients does not suggest China’s influence is especially impressive relative to other providers: surveys report that, out of 35 bilateral and multilateral development partners, China ranks 31st in terms of helpfulness (just below Spain) and 21st in terms of influence (just above the Netherlands).

China’s total financing numbers look big because concessionality on the country’s development finance is so limited. Chinese finance is on average about half as concessional as World Bank loans–18 percent as compared to 36 percent. And that suggests something about the costs of competing with China if the West really feels like investment in poorer countries needs to be a competition: those costs could be very low. The US and Europe could provide a lot more financing at rates above their own cost of borrowing to support both the private and public sectors in developing countries. In the US this could be through the US International Development Finance Corporation, for example, which has an expanded lending authority and can undertake sovereign operations.  The DFC is routinely profitable—handing money over to Congress every year. In the UK, with the press unhappy at the use of aid in powerful countries and the loss of influence over EU finance, the ability to lend non-concessionally could transform the UK’s financial heft and influence in middle-income countries on issues like climate, health, and girls’ education. And without the burden of concessionality, CDC could return to investing with success in companies in emerging economies.

Using multilateral financial institutions to provide additional lending would be even cheaper and more effective than bilateral approaches, and would also strengthen the global rules-based system: US shareholder capital contributions of $2.9 billion leveraged by other countries and interest payments have supported $681.3 billion in World Bank lending since 1945. But while a multilateral approach would be first best, if it is deemed insufficiently focused on US, UK, or European values or priorities, then additional bilateral lending could still be beneficial—as long as they remained untied and focused on development and the delivery of global public goods.

Does the world need more lending?

Not only would ramped up lending to governments and finance for the private sector be cheap to implement, it would also be good for development, especially in a time of global economic collapse and very low interest rates. Of course that lending would need to be sustainable—something that has been a concern with Chinese financing in a number of countries for a while. Recent World Bank analysis suggested 11 countries are likely to experience an increase in their debt-to-GDP ratio as a result of Chinese Belt and Road Initiative investment and financing, and eight among them would be vulnerable to changes in the cost of financing. And that was before the massive negative macroeconomic shock of COVID-19, which precipitated a G20 debt repayment moratorium on 76 IDA eligible countries. In those IDA countries, Chinese financing has historically had a 21 percent grant element compared to 49 percent for the World Bank. China should take debt sustainability issues more seriously, and may pay a price in having to forgive some of its loans. And if the US and UK want to limit the costs of their lending operations, avoiding future finance that might need to be restructure or forgiven is very much in their self-interest.

Still, there are plenty of low-income countries who need more not less lending. If the US and Europe offered financing packages to compete with China, that would give recipient countries the benefit of choice. And even in countries where there is limited scope for additional market-rate finance to governments, there may be a role for such finance to the private sector. Private finance is a considerably larger source of external funding in middle-income countries than aid, and it is drying up during the COVID-19 global economic slowdown.

The problem with China today isn't that it is a huge global development behemoth, it is that it not being generous as it should be given its size—just like the US. Both countries could easily afford to significantly ramp up grant support and, where appropriate, the US and Europe could supplement that with more market rate investments –preferably through capital increases to multilateral development banks and development finance institutions.

As the chairman of the US Senate Foreign Relations Subcommittee on African Affairs put it in a hearing about Chinese investment in sub-Saharan Africa, “I believe that the appropriate response to China’s rising role in Africa is more United States engagement with both Africans and Chinese to show that we acknowledge the growing strategic importance of this continent and are committed, over the long term, to its stability, development, and prosperity.” That was in 2008, as it happens, but the message is still the right one. Competing to finance sustainable development in the world’s poorest countries would be good for those countries as well as China, Europe, and the US.

Chinese development projects worldwide: Perhaps not quite as alarming as the color scheme suggests 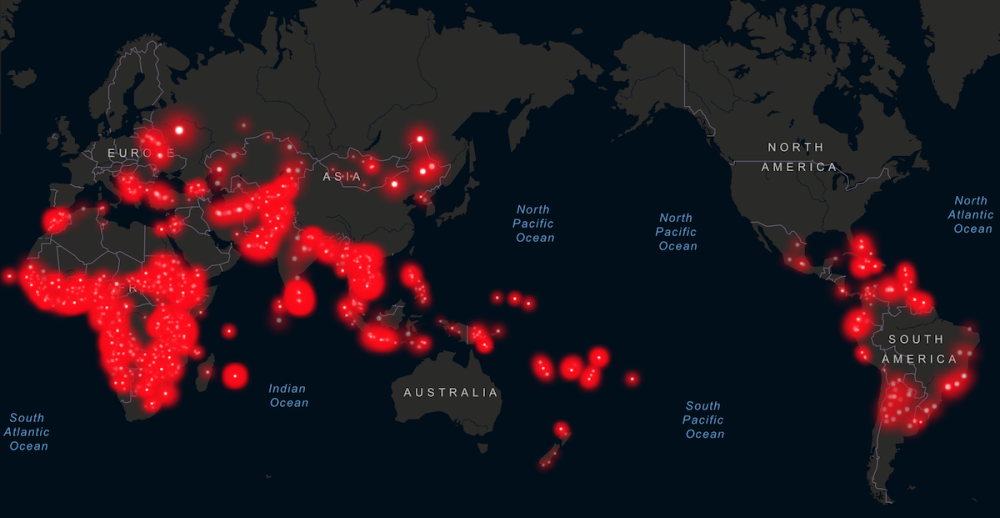