On December 2, the Office of the Comptroller of the Currency (OCC) announced that it would offer a special purpose national bank charter to financial technology (fintech) companies that take deposits, provide credit, or facilitate payments—so long as they meet certain capital, liquidity, and consumer protection standards.

Once in place, the national charter has the potential to transform the fintech industry. To date, US regulators have classified fintech companies as money service businesses (MSBs) and required them to obtain licenses and satisfy regulations on a state-by-state basis, which has slowed their expansion. By slicing through the patchwork of state and federal laws and providing a stamp of approval, the charter will make it easier for fintech companies to grow and build consumer trust. Over time, this will have positive knock-on effects for financial inclusion, particularly for the cost of sending remittances, as increased competition from fintech companies will help to drive down prices.

The promise of mobile money

Two billion people in the world do not have an account at a bank or similar financial institution, according to the World Bank’s Findex Database. In developing economies, 46 percent of adults are “unbanked” and coverage is worse for women and people living in rural areas. But progress has been rapid: since the World Bank began collecting detailed data on financial inclusion in 2011, more than 700 million adults have obtained bank accounts. As Figure 1 indicates, the number of account holders increased most rapidly in Asia and the Pacific (14 percent), Latin America (12 percent), and Sub-Saharan Africa (10 percent). The improvement in Africa is striking because it was driven entirely by the expansion of mobile money technology, through which customers can access basic financial services—such as paying bills and sending or receiving money—using their mobile phones. 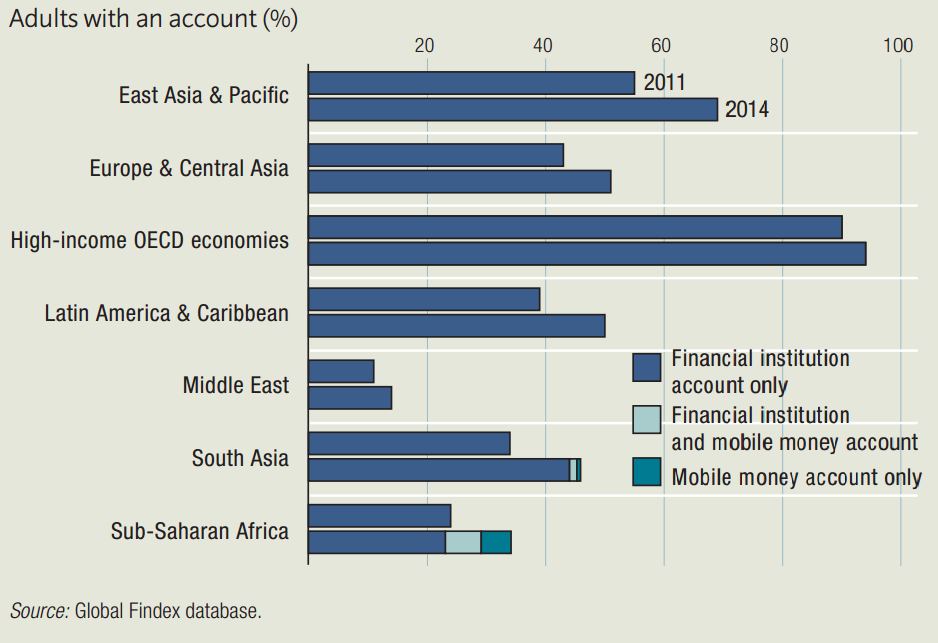 The African experience bodes well for financial inclusion efforts across the globe. Most importantly, it illustrates how mobile technology can expand the reach of financial service providers by greatly reducing the marginal cost of serving customers. A recent report by the McKinsey Global Institute estimates that the price of providing financial services through mobile money accounts can be up to 80 to 90 percent lower than those provided by traditional “brick and mortar” banks. This dramatic reduction in cost creates incentives for providers to do business with individuals formerly considered too poor or difficult to reach to be profitable.

Fintech and the Obama Administration

To its credit, the Obama Administration early on recognized not only the power of digital technology to support financial inclusion but also how financial inclusion could, in turn, support its broader development goals. Both were themes of the second Financial Inclusion Forum hosted by the US Treasury Department and USAID on December 1, at which USAID Administrator Gayle Smith characterized digital financial inclusion as a “force multiplier.” As an example, she cited the tech start-up Off Grid Electric, which provides solar panels to poor households in Tanzania who use their mobile money accounts to pay for the panels in incremental installments at a rate they can control.

USAID continues to promote the development of digital financial services in developing countries, including through its support of the Better Than Cash Alliance, which promotes the transition from cash to digital payments, and with the February 2016 publication of a Guide to the Use of Digital Financial Services in Agriculture, which outlines steps developing countries can take to support the growth of digital finance for the benefit of smallholder farmers.

For its part, the US Treasury worked closely with other G20 members and the Global Partnership for Financial Inclusion (GPFI) to develop the G20 High Level Principles for Digital Financial Inclusion, which provide guidance for policymakers seeking to shape and accelerate the use of digital financial tools.

The US regulatory regime for fintech evolves

As noted in the G20 High Level Principles, realizing the full potential of digital finance will require an enabling legal and regulatory framework. US regulators are now taking steps to create such a framework, as they try to catch up with the explosive growth of fintech that has taken place in recent years. The pace of expansion has been remarkable: global investment in fintech ventures reached $5.3 billion in the first quarter of 2016, exceeding the amount invested in full-year 2013. These companies offer a wide variety of services (e.g., peer-to-peer lending, money transfers, mobile wallets) but are united by their reliance on digital technology to drive down transaction costs.

The OCC announcement makes it clear that US regulators believe in the power of fintech and intend to support its development. OCC Comptroller Thomas Curry noted that new innovations have “great potential to expand financial inclusion, reach unbanked and underserved populations, make products and services safer and more efficient, and accelerate their delivery.” On the same day as the OCC announcement, Federal Reserve Governor Lael Brainard gave a speech encouraging policymakers to “facilitate innovation where it has the potential to yield broad social benefit, while ensuring that the risks are thoroughly managed.”

Regulators now face a difficult challenge. They must not only strike a balance between preserving the safety and soundness of the financial system and supporting useful innovation, but also weigh the opportunities and risks associated with technologies that they don’t, at least initially, deeply understand.

The stakes in the battle for market share in digital financial services are high and investment and innovation will accelerate further as regulators provide more clarity about the standards they expect fintech companies to meet. The vast majority of that investment will continue to flow to fintech companies that improve the provision of credit and services to those who already have financial access. However, the innovation it spurs will also support the development of products aimed at those currently operating outside the formal financial sector. This is good news for the world’s poorest people.