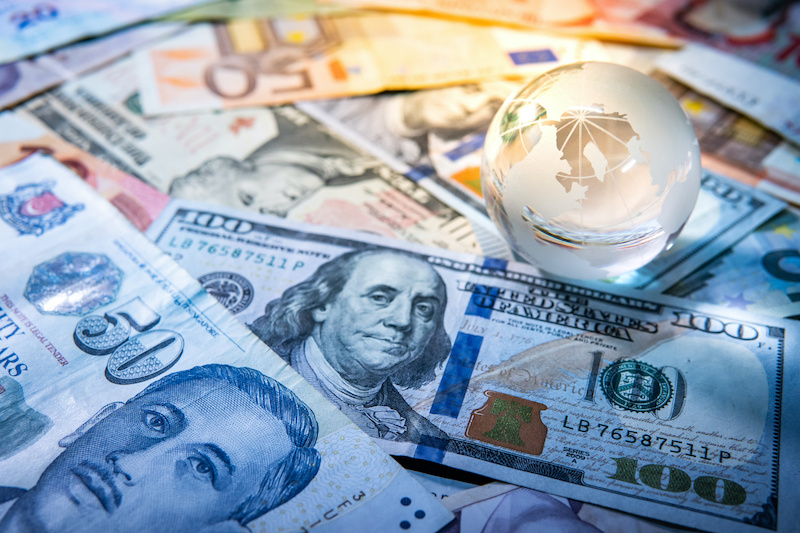 In a previous blog, we noted that IDA, the World Bank’s lending arm for poor countries, has an important mechanism for providing relief to low-income countries facing debt distress. Rather than providing relief on repayments from existing loans, IDA’s debt sustainability framework adjusts future financing from loans to grants for countries at high risk of debt distress. As some have called on the World Bank to join the G20 debt repayment standstill, we argued that it is better to ensure a positive “net flow” of resources to IDA countries, which relies in part on the flow of grant resources to countries the Bank has deemed unable to take on new debt. But what happens to IDA’s loans-to-grants model when a large number of IDA countries trigger the risk thresholds? Can IDA afford its commitment to debt sustainability? 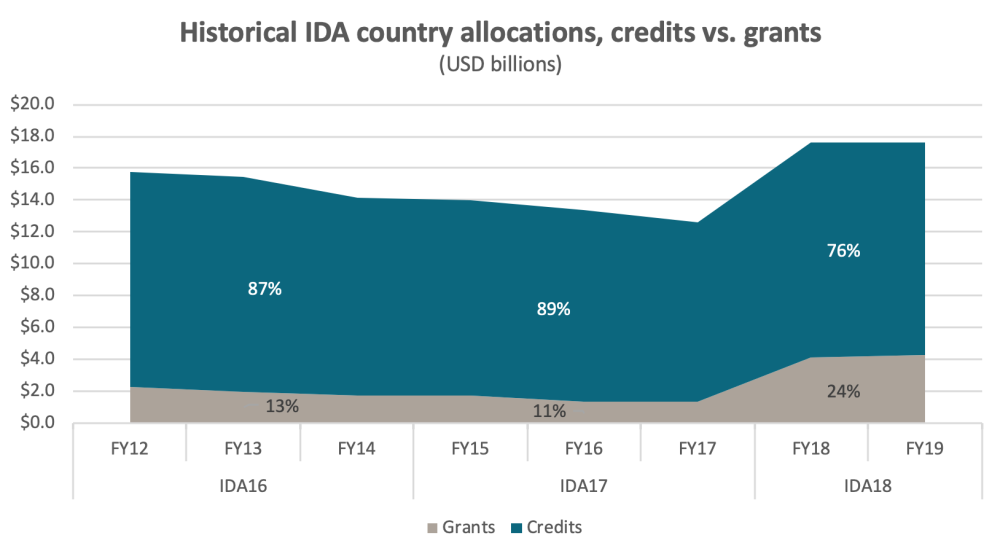 Note: non-core IDA allocations (including regional allocations and the Crisis Response Window) are not included in this chart

As a growing number of low-income countries experienced higher levels of debt risk in recent years, IDA financing responded. Whereas grant terms were low and stable between 2012 and 2017, grants jumped to account for one quarter of IDA financing over the past two years. Striking as this trend has been, the shift has been modest enough that the direct tradeoffs between loans and grants are less apparent, in part because IDA’s on-going fundraising through donor replenishments and the introduction of market borrowing has obscured this picture. That is to say, IDA’s available resources have grown over this period, which has made the additional cost of grant financing less apparent.

Yet, reasonable scenarios for the debt sustainability framework as a result of the current crisis point to the potential for a highly stressed IDA financial model.

First, consider the baseline scenario, which simply applies the latest debt risk ratings and relative country allocations to IDA-19 including projections on grant needs for regional projects and the crisis response window.

Assuming no further changes in risk ratings or relative country allocations, grants will continue to account for nearly 25 percent of IDA financing going forward. This increase in grants over historical levels is driven by three factors: a decision in IDA18, the current three-year round of IDA financing, to allocate more financing to fragile states (which tend to have high debt levels); a larger number of IDA countries at risk of debt distress (double the number today compared to FY2016); and a decision in IDA18 to provide dollar-for-dollar grant financing, departing from prior practice which cut financing volumes by 20 percent when countries shifted from loans to grants. 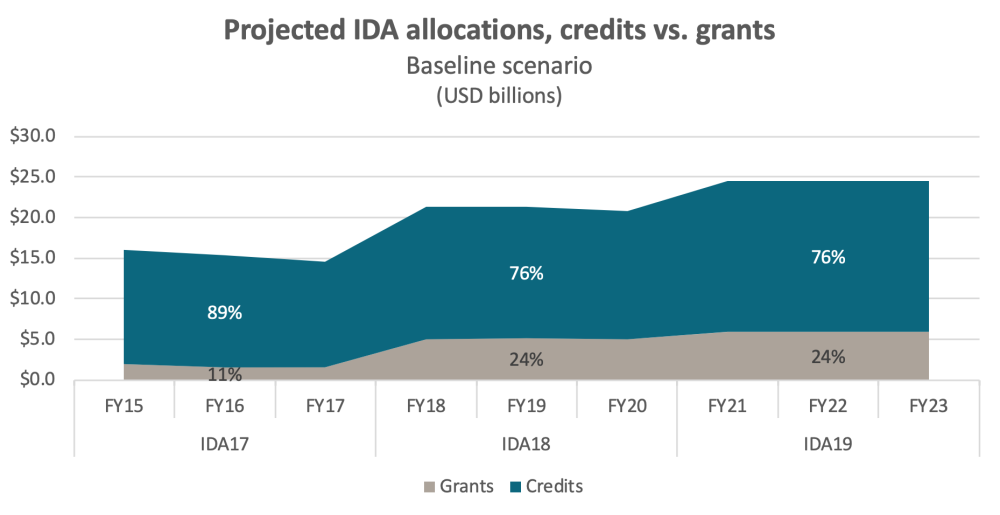 But suppose country risk ratings do change as result of further deterioration in their debt positions. What happens to overall grant allocations? First, let’s assume that every country currently at moderate risk is converted to high risk during the next three years, but all low-risk countries stay low risk. The grant share of IDA’s portfolio would increase significantly, from the baseline of 24 percent to 38 percent. 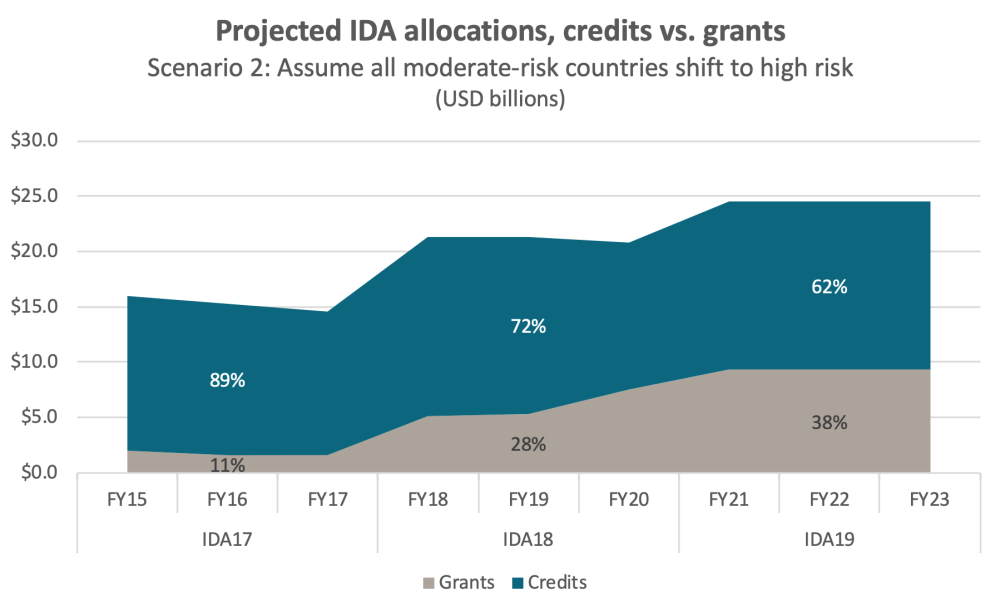 Next, let’s assume that all low-risk countries also shift to moderate risk, such that they receive a 50/50 mix of loans and grants. Countries categorized as “gap” and “blend” countries, regardless of their debt risk, remain at 100 percent loan financing. In this scenario, the grant share of IDA financing rises to 45 percent. 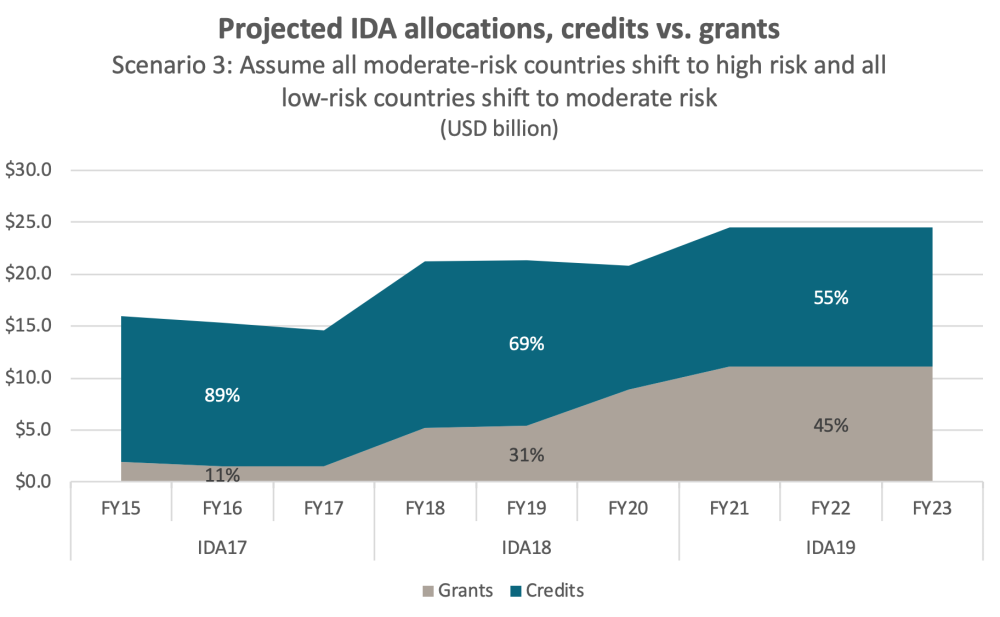 And finally, suppose that the 13 “gap” countries—those above IDA’s operational GNI per capita threshold for access to any grants, but not considered creditworthy enough to access IBRD, the arm of the Bank that lends to more credit-worthy countries—drop below this per capita threshold due to the economic fallout from COVID-19, thereby making them eligible for grants according to their debt risk ratings. Assuming these countries also see their debt profiles deteriorate such that they each rise one category in debt risk, nearly 60 percent of IDA’s allocations would be in the form of grants. 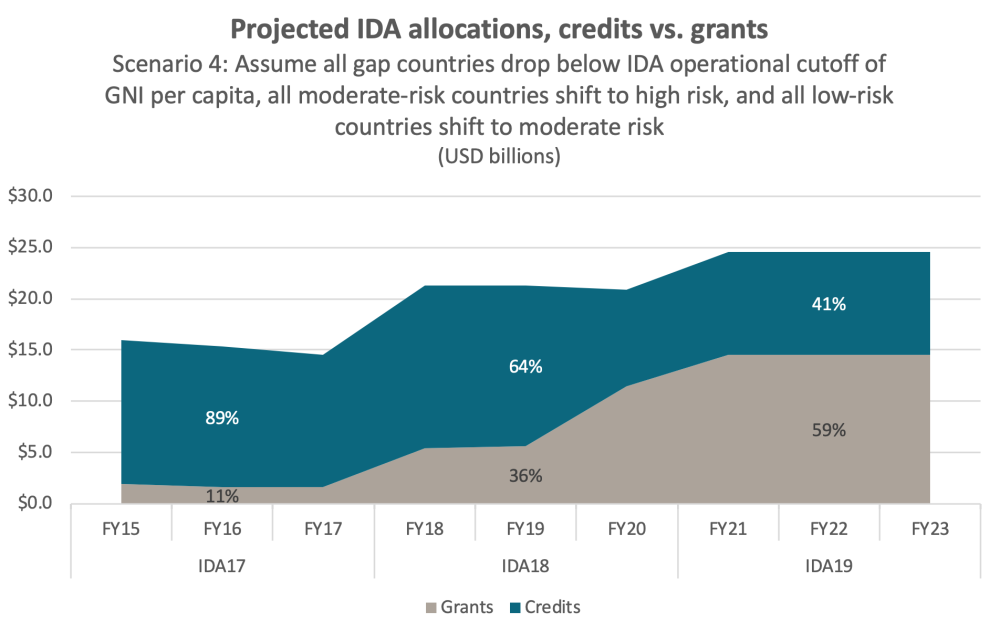 These simplified models mask additional factors that should be considered. First, the relative country distributions of IDA’s core resources, allocated according to the Performance-Based Allocation (PBA) System, could shift in FY21 compared to previous years. While we cannot predict exact country allocations for FY20 onward, we know which key indicators have a large influence on these allocations, including (among others) the country’s Country Policy and Institutional Assessment (CPIA) rating. The CPIA is also an important input in determining a country’s debt sustainability rating, and it is likely that there are other overlapping inputs between the PBA and the DSA. In practice, this could mean that countries with higher debt vulnerabilities ultimately receive lower PBA allocations, even if this adjustment is not formally triggered by a country’s debt rating. Under the new PBA for IDA19 resources, this automatic stabilizer may mitigate some of the rapid increase in the volume of IDA grants. The extent of this effect is uncertain right now, as PBA allocations are only disclosed at the end of the fiscal year, but it has important implications for the volume of crisis financing available to at-risk IDA recipient countries as well as IDA’s fiscal sustainability.

A second factor to consider is the risk that IDA’s largest borrowers will draw more on grant resources in the future. Already, Ethiopia and Ghana are at high risk of debt distress. Among IDA’s other largest borrowers, Bangladesh, Uganda, Myanmar, and Nepal are all at low risk of distress as of their latest debt assessments. But Kenya and the Democratic Republic of the Congo are at moderate risk of distress. Depending on the severity of the crisis, these large borrowers could draw more on IDA’s grant resources, either by becoming 50/50 borrowers or pure grant recipients. Pakistan and Nigeria also rank among IDA’s top borrowers, but they are not currently eligible for grant support because they are Blend countries.

Can IDA-19 meet a surge in grant financing needs?

An advantage of market access is that if IDA needs to adjust its financing target over the course of the replenishment it can do so by simply issuing new debt. But since IDA borrows from markets on market terms, the grant element of the replenishment remains relatively constrained. If IDA were to go above its grant financing envelope, it would need to look to its equity or its donors to cover the cost.

In IDA19, partner grants total around $23.5 billion. We estimate that IDA19’s internal resources (mainly in the form of reflows) and borrowing (mainly market borrowing and some concessional partner loans) together amount to around $50 billion.

How would IDA address this grant shortfall under the more extreme scenarios? It can go back to donors early for fresh funds, it can decrease the volume of its grant program, or it can use its internal resources (i.e., it’s “equity”) to cover grants. This last option, which would convert $20.1 billion of IDA’s equity to grants under scenario 4, appears least likely since it would jeopardize IDA’s program of market borrowing, which underpins the higher volume of lending in IDA19 and beyond.

Instead, it seems more likely that IDA would turn to its donors for an extraordinary replenishment of grant funds. And in fact, World Bank President David Malpass suggested as much late last week. As donors consider putting new funds into IDA, they will also need to consider the tradeoff between maintaining grant terms for high-risk countries and achieving appropriate levels of crisis support. IDA’s donors may prove willing to underwrite the cost of maintaining grants to some degree. But we should also recognize that these scenarios do not envision any sustained scaling up of IDA financing over the IDA19 replenishment period. Right now, the World Bank is focused on frontloading its IDA19 resources, which enables some short-term scaling up. But if the crisis persists, maintaining high levels of support (above the levels envisioned for IDA19 prior to the crisis) will force IDA’s donors to decide if they are willing to pay for crisis levels of grant financing, or if they want to see some adjustment in financing terms to allow for higher volumes through concessional loans, even for high debt risk countries. Ultimately, this will be a question of donor generosity. A bad outcome would entail a decrease in crisis financing in order to accommodate grant financing in the absence of sufficient donor support.

But the good news is that for now, IDA has the tools to mount an ambitious grant-based financing program. Seize the day.