by
Maya Forstater
and
Matt Juden
February 12, 2016
International Tax, Transparency, and Finance for Development: A Short Guide for the Perplexed

Over the past couple of weeks Malawi has become the latest poster child for UK campaigns arguing that changes to the international tax system can deliver outsize returns for development.

Specifically, Action Aid is calling on the UK government to renegotiate a 60-year-old tax treaty. Questions were also raised about this issue in the House of Commons.

The idea that it is time to renegotiate a colonial-era tax treaty seems fair enough — indeed the UK government has already officially stated that this is in process. Action Aid, Christian Aid, and Oxfam have also put forward a helpful discussion document that outlines expectations for responsible corporate tax behaviour.

But there are two problems with this latest campaign. One is that the potential benefits of changing the ways multinational corporations are taxed in poor countries like Malawi are hugely overstated. This distracts attention from priorities higher up on Malawi's agenda, like domestic resource mobilization, strengthening public institutions, and attracting foreign direct investment. The second is that this campaign is worryingly evidence-free. Branding current investors as “tax dodgers” in the absence of evidence may deter the future investors that countries like Malawi so desperately need.

The benefits are overstated 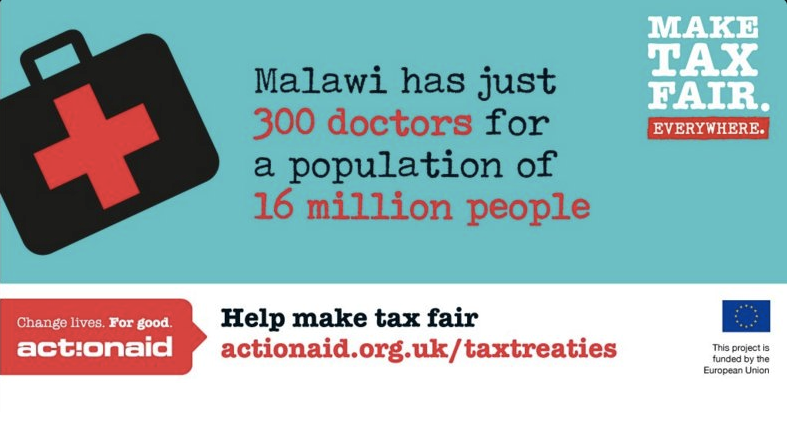 The argument that changes to international taxes could put a major dent in the problem of financing development in Malawi is hugely overstated. In 2013, the stock of foreign direct investment (FDI) in Malawi amounted to US $1.3 billion, while annual inflows were of the order of $118 million. If we assume a 15 percent return on the stock of FDI, annual profits might be in the region of $175 million. This is probably a generous assumption as the Malawi Investment and Trade Centre says the main sectors for FDI are infrastructure and energy projects which can take many years to break even. Also, FDI numbers are likely reported on a historical cost basis rather than current adjusted dollars. Nonetheless, the corporate tax rate in Malawi is 30 percent, and a back-of-the-envelope calculation suggests that we might expect $52 million in corporate income tax from international investors (probably a quarter of this related to UK companies), or $3 for every person in Malawi per year. By comparison, in 2013, aid flows to Malawi were approximately $70 per person.

Increasing the tax take from multinational companies would only make a small difference to Malawian government revenues. Telling people that taxing multinationals more could solve Malawi’s budget crisis undermines the national conversation about the hard choices the government faces on spending priorities.

The evidence simply isn’t there

Action Aid say the tax treaty between the UK and Malawi makes it possible for UK companies in Malawi to “pay little or no corporate tax” resulting in crumbling public services and lost lives. They quote angry doctors, nurses, and teachers: “If big companies divert tax, they should know that they are killing people.”

But there is no specific example of a UK company behaving badly or any estimate of how much money might be at stake from reforming the tax treaty. The only case that is highlighted is the Kayelekera mine, operated by the Australian company Paladin. This mine was a loss-making venture and is shuttered as it is uneconomic to operate at current prices, suggesting that the deal may not have been as generous as some campaigners once believed.

In the absence of any evidence of wrongdoing, it is irresponsible to brand the few companies that invest in Malawi from the UK as undermining the country’s development. Stoking the fire in this way could create reputational and tax risk for the private sector and may deter sorely needed productive investment.

Malawi’s problems are not a mystery. Small, landlocked, largely rural and extremely poor, Malawi is a country where less than 10 percent of people have access to electricity. It is at the lower end of the World Bank’s Doing Business Index. In 2013 the “cashgate scandal” revealed large-scale theft of public funds. The UK and other donors that had been covering 40 percent of government spending suspended direct budget support, leading to the government printing money. Inflation is running at around 25 percent.

The Malawian government’s most urgent challenge is to rebuild trust in its public institutions and stabilize its economy. At the same time it needs to develop infrastructure, and improve health care and education.

Describing the challenge is easy enough, but meeting it is hugely difficult. Eliminating a clause in an international treaty will not be sufficient and may not even be relevant. Malawi’s development depends on its government being able to maintain a focus on its priorities, gain public support for difficult choices and improve public resource management.

The role of international organizations

There is always a role for making powerful firms behave better overseas, whether by tackling corruption or improving tax behavior. But to enable the development outcomes we want, we need to shift the conversation to one that takes the challenges and barriers to investment seriously. Campaigning and advocacy organizations have an essential role to play in doing that.

And this needs to happen quickly. The UK might be able to afford a myth-fueled knock-about debate on the tax affairs of big companies, but countries like Malawi and Zambia cannot.